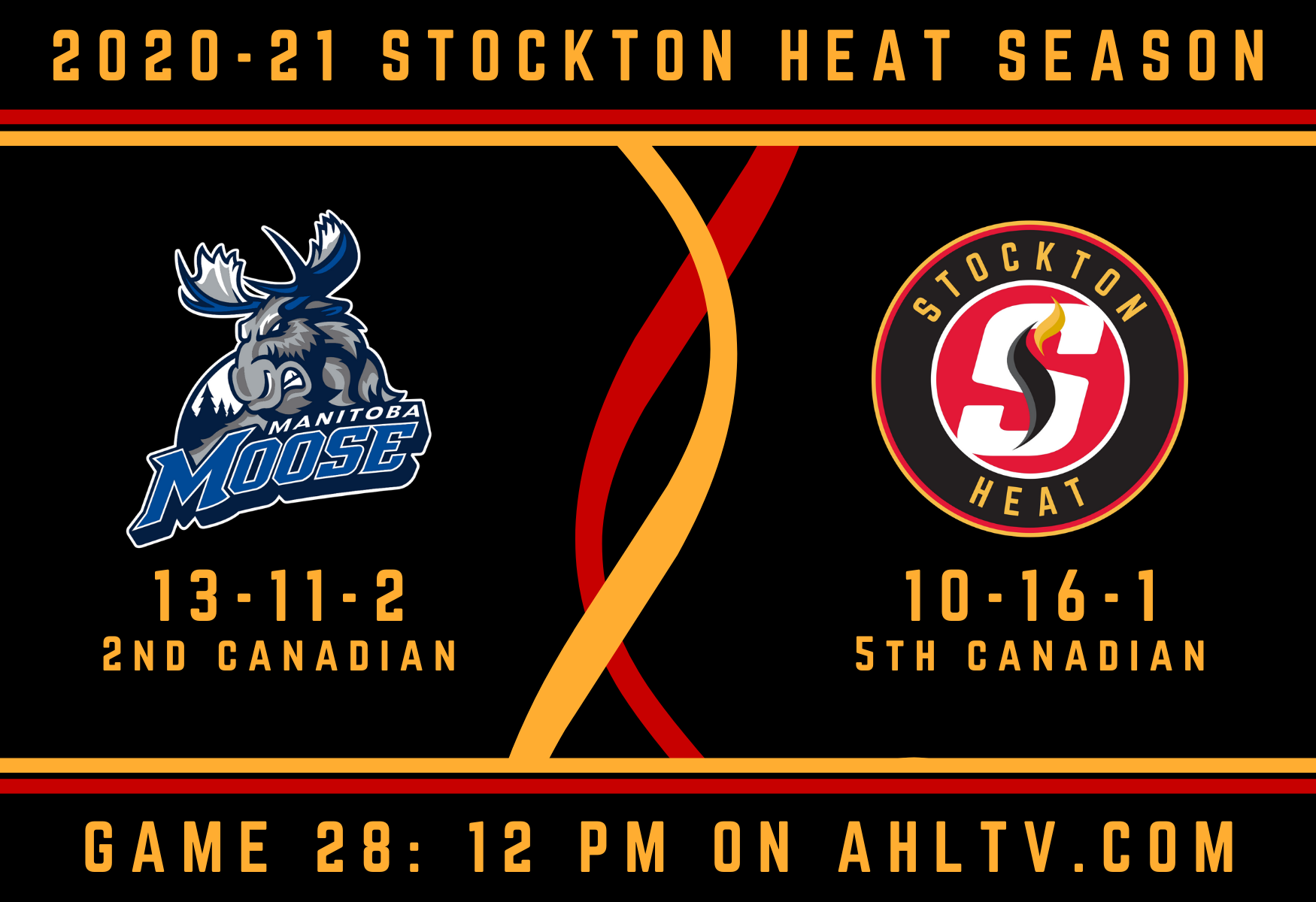 Photo credit: Graphic by Mike Gould
By Mike Gould
1 year ago
Comments
The Stockton Heat have just three games left to play before the end of the regular season.
They’re currently in the midst of a five-game losing streak and have dropped 15 of their last 17 decisions. Most recently, the Heat fell by a 3-0 score at the hands of the Manitoba Moose on Saturday afternoon.
Stockton’s skaters mustered just 13 shots over that 60-minute contest; Heat goaltender Garret Sparks allowed three goals but made 43 saves along the way.
With a .389 points percentage through 27 games, the Heat now rank as the fourth-worst team in the American Hockey League and can fall bellow the Ontario Reign with a loss on Monday.
Their opponent? Once again, the Moose team that has now beaten them on three consecutive occasions. Stockton started its season series against Manitoba with three-straight wins of their own, including two in overtime.
Advertisement
Ad
Advertisement
Ad

Stockton — Adam Ruzicka. Since returning to Stockton after a brief stint on the Calgary Flames’ taxi squad, Ruzicka has scored zero points and has a minus-six rating in three games.
It hasn’t been a great stretch for the 21-year-old centre, who still leads the Heat with 10 goals but has been overtaken by Matthew Phillips in the team points leaderboard.
Ruzicka consistently ranks as one of Stockton’s best volume shooters and has 67 shots in just 25 games this year. In his last three games, Ruzicka has just four shots and has been held without a single one in two of his last six games. Those are the only such instances this season of him being shutout in that department.
Advertisement
Ad
Advertisement
Ad
Manitoba — Nick Jones. Jones was at the centre of a memorable incident from Saturday’s game, bowling into Sparks on a drive towards Stockton’s crease.

#AHLHeat goaltender Garret Sparks is furious after being barreled into by Moose forward Nick Jones.

Sparks threw multiple blocker punches at Jones before standing up and decking Cole Maier (and, inadvertently, an official) with a right.

Sparks voiced his displeasure with Jones’ actions after the game.
“I’m just tired of getting run over by guys,” said Sparks. “I’ve already kind of claimed my space in the crease and these guys are just skating full-speed at me, and it’s not like my D are pushing them in. It’s not like they’re making a very quality effort to get out of the way. They know they can take it hard to the net and they’ll live to tell about it. I’m just kind of tired of it.”
Advertisement
Ad
Advertisement
Ad
Jones has two goals and six points in 25 games with the Moose this season.

This game will be broadcast on AHLTV.com (subscription required), with the opening puck-drop set for 12:00 pm MT. Live game updates can be found on Twitter at @miketgould or online at TheAHL.com.