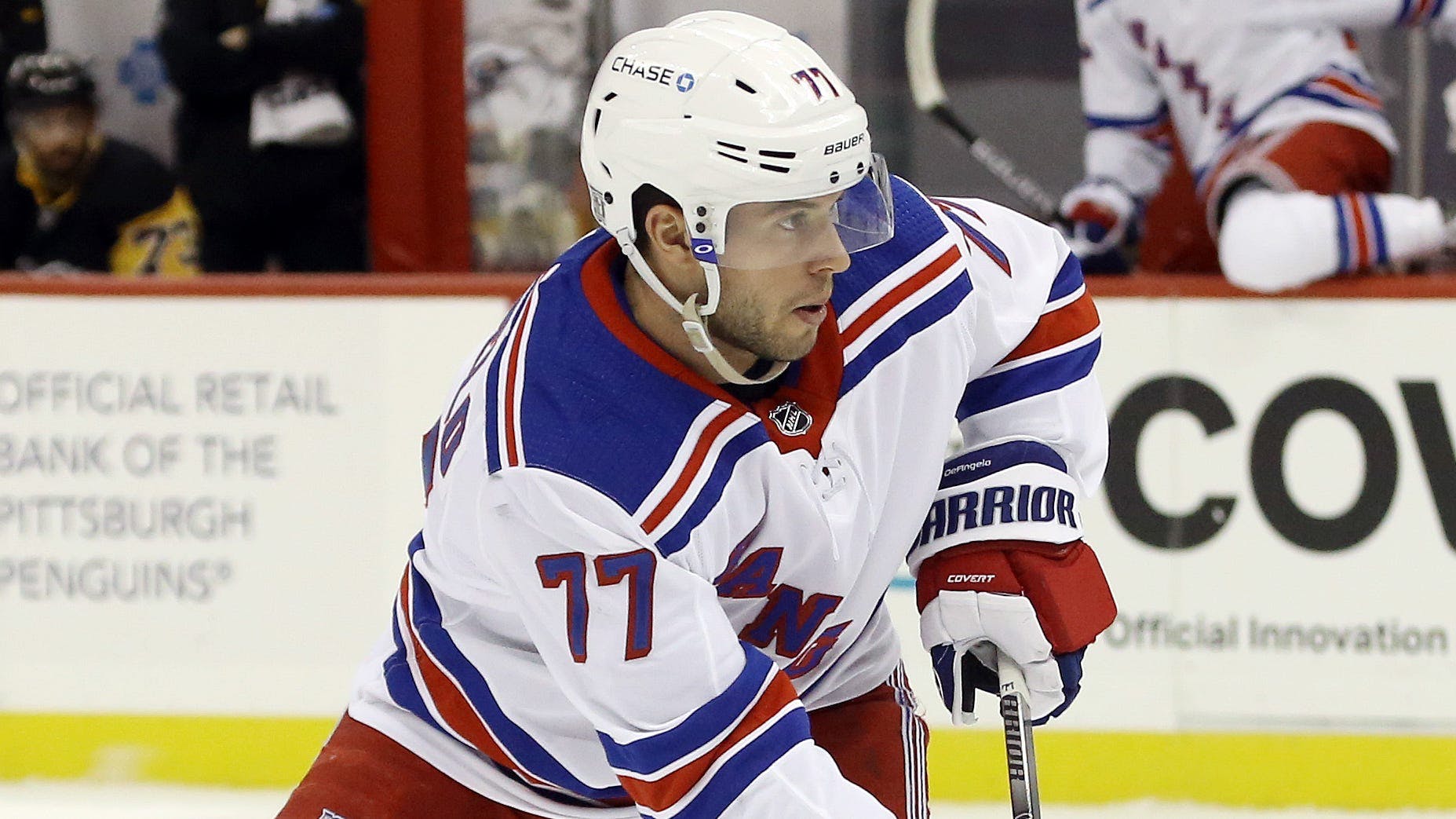 Photo credit: Charles LeClaire, USA TODAY Sports
By Mike Gould
1 year ago
Comments
NBC Sports analyst Bob McKenzie reported Wednesday evening that the Calgary Flames are among “at least four or five teams” that have checked in on New York Rangers defenseman Tony DeAngelo.
McKenzie also listed the Detroit Red Wings, Los Angeles Kings, and Anaheim Ducks as potential suitors who are “doing their due diligence to see if [DeAngelo] is a reclamation project they’re prepared to take on.”

Here's the full quote from McKenzie re: DeAngelo to CGY, DET, ANA, or LA. https://t.co/RInO3DIyzM pic.twitter.com/Ma6o5Fmofe

DeAngelo, 25, signed a two year contract extension with the Rangers last October worth $4.8 million per season. He recorded 15 goals and 53 points in 68 games with the Rangers in 2019-20 but has just one assist in six games this year.
Advertisement
Ad
Advertisement
Ad
Rick Carpinello of The Athletic reported Sunday that DeAngelo was involved in a physical altercation with a teammate, goaltender Alexandar Georgiev, following the Rangers’ 5-4 overtime loss to Pittsburgh on Saturday. The off-ice confrontation occurred after DeAngelo and Georgiev had a mix-up with the puck behind the Rangers’ net, moments before Sidney Crosby scored the overtime winner.

Here's the miscommunication between DeAngelo and Georgiev from last night's overtime + the Penguins' game-winning goal that he was on the ice for #NYR pic.twitter.com/KhlJJPtrL8

The Rangers placed DeAngelo on waivers the following day; he cleared on Monday and the Rangers assigned him to the taxi squad.
Sportsnet’s Elliotte Friedman broke down the incident on the latest episode of his “31 Thoughts” podcast:

They go off the ice, Georgiev is sitting, disappointed—like any competitive person, especially a goaltender, would be after a game like that—and DeAngelo walks by him and makes a sarcastic crack to him, and Georgiev clocks him. They go at it, and their teammates break it up. Later that night, the Rangers call DeAngelo [or his agent] and they say, ‘That’s the last straw. You’re going on waivers tomorrow.’

Advertisement
Ad
Advertisement
Ad
DeAngelo has long been a controversial figure in the hockey world. In 2014, while playing for the OHL’s Sarnia Sting, he was suspended after directing a slur at one of his own teammates. During his tenure with the Arizona Coyotes, he was suspended three games for physical abuse of officials.
Carpinello further reported that DeAngelo “had been scolded by the [Rangers] multiple times for his social media postings and recently stopped posting.” Rangers general manager Jeff Gorton announced Monday that DeAngelo has played his last game with the Rangers.
Advertisement
Ad
Advertisement
Ad
In addition to DeAngelo’s history of toxicity, his contract would prove very difficult for the Flames to absorb. According to CapFriendly, the Flames’ current roster alignment would put them just $1,337,774 under the salary cap at the end of the season. DeAngelo still has $3,050,647 in daily cap hits remaining on his deal for this year.
UPDATE — Feb. 3, 9:46 PM MT
Sportsnet 960 The Fan personality Dean Molberg reported Wednesday night that he does not expect the Flames to make a move to acquire DeAngelo.

Reached out to a member of the Flames front office tonight. I’ll say this, I do not expect the Flames to be making a move to acquire Tony DeAngelo.

This article has been further updated to include comments from Sportsnet’s Elliotte Friedman with more details about the reported confrontation between DeAngelo and Georgiev on Jan. 30.
Advertisement
Ad
Advertisement
Ad