Advertisement
Ad
Post-Game: Phillips soars as Stockton wins its seventh in a row 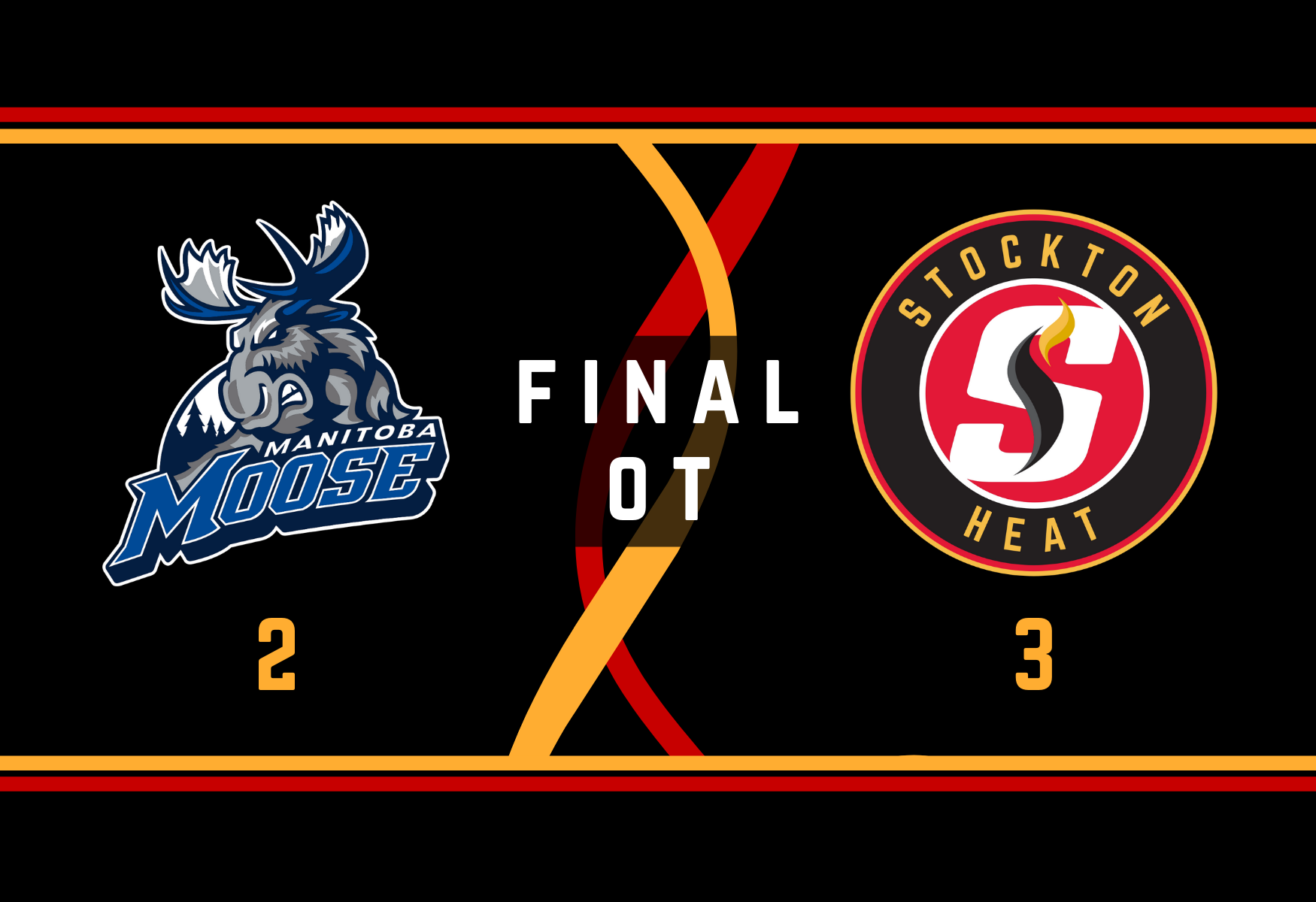 Photo credit: Graphic by Mike Gould.
By Mike Gould
1 year ago
Comments
According to Wikipedia, Matthew Phillips is “a Canadian professional ice hockey centre currently playing for the Stockton Heat of the American Hockey League (AHL), as a prospect for the Calgary Flames of the National Hockey League (NHL).”
First of all, he’s been playing on the right wing for Stockton. Second of all, that intro fails to mention that he might, in fact, be good. Very good, even.
Citation needed? Well, how about this: Phillips helped the Heat claw out of a 2-1 deficit on Wednesday by scoring both the game-tying goal and the game-winning goal. He’s scoring at a pace of nearly two points every game, having recorded 13 points in his last seven contests.
Only Nathan Todd (16 points) and Cooper Marody (14) have scored more than Phillips has this season. The catch? Todd has already skated in 14 games, while Marody has participated in 11. Phillips, meanwhile, already has 13 points and just finished his ninth game of the 2020-21 season.
Advertisement
Ad
Advertisement
Ad
That all probably qualifies as “good.”
Emilio Pettersen also scored for Stockton, which improves to 7-2-0 on the season. Only the Henderson Silver Knights (10-1-0, .909 points percentage) rank ahead of the Heat (.778) in the AHL’s league-wide standings.

The Heat started Wednesday’s contest by playing some very good hockey, recording the first seven shots of the game and drawing two penalties by the 5:10 mark of the first period.
The best of these early opportunities may have come off the stick of Glenn Gawdin, fresh off scoring the overtime winner in Monday’s contest against the Moose. After Connor Mackey one-timed a pass from Luke Philp towards Manitoba goaltender Mikhail Berdin, Gawdin collected the rebound in tight but was denied by the Ufa product.

Nice save by Berdin, who also stopped Gawdin on the rebound. Still 0-0 in the first. pic.twitter.com/gamrhGim1Q

Advertisement
Ad
Advertisement
Ad
First-year professional Emilio Pettersen starred for the Heat on Monday and picked up where he left off in Wednesday’s game. He opened the scoring at the 13:57 point of the opening frame, making a crafty play with his skate to redirect a long shot past Berdin.
Alex Petrovic and Martin Pospisil both maintained their point-per-game (or better) scoring paces on the year by picking up assists on the goal.

Pettersen tips a Petrovic shot with his skate past Berdin to give the #AHLHeat a 1-0 lead.

Pospisil should pick up the secondary assist. pic.twitter.com/8VTEFfOETe

The Heat continued to press as the first period progressed, with Pettersen once again finding himself right in the middle of high-danger plays. With under four minutes to play in the first, he very nearly beat Berdin on a Colton Poolman rebound before corralling the puck and setting up Dmitry Zavgorodniy for a good chance.
Advertisement
Ad
Advertisement
Ad
Zavgorodniy, 20, has had no shortage of looks through his first nine AHL games but is still searching for his first point.

Emilio Pettersen has a nose for the net but he's also very good at creating opportunities for his linemates.

Despite being outshot by a wide margin, the Moose tied the game in the final minute of the opening frame. 2020 first round pick Cole Perfetti rushed up the ice on the right side before cutting to the middle as he entered the offensive zone, leaving the puck for Skyler McKenzie to skate in against Zagidulin on a breakaway.
McKenzie made a nice move and put the puck upstairs for his second goal in three games. The Heat recorded 18 shots in the first 20 minutes, compared to just five for the home side, but exited the period in a 1-1 tie.
Advertisement
Ad
Advertisement
Ad

Really nice rush by Cole Perfetti allows Skyler McKenzie to break in all alone on Zagidulin, and he makes to mistake.

This game is tied at 1 apiece after 20 minutes. #AHLHeat outshooting the Moose 18-5. pic.twitter.com/98XftLRNke

Stockton’s poor conversion rate in the first period came back to bite them early in the second, when Jeff Malott fired a shot towards Zagidulin which trickled through the goaltender’s pads and into the cage. Malott’s team-leading seventh goal of the season gave Manitoba its first lead of this series against the Heat.

The Moose dominated in the second period. Beyond the goal, they out-shot the Heat by a 14-2 margin. Stockton took it to its opposition when Kristian Reichel took a two-minute hooking penalty at the 4:45 mark of the frame but, outside of that power play, the Heat barely clung to the one-goal deficit.
Advertisement
Ad
Advertisement
Ad

This hit by Alexander Yelesin on Malott made matters worse for the Heat, sending them to the penalty-kill with 5:07 remaining in the second 20. Despite not scoring on the man-advantage, the Moose would close out the period with six consecutive shots. Zagidulin kept his team in the game and the score remained 2-1 after 40.

#AHLHeat have been dominated in this second period, being outshot 8-2, and are heading to the PK with 5:07 to play.

Not a good hit by Yelesin here against Jeff Malott. Moose have two minutes to extend their 2-1 lead. pic.twitter.com/gzL7ZcNvUZ

Advertisement
Ad
Advertisement
Ad
Manitoba started the third period strong, recording eight of the first 11 shots in the final frame; however, the Heat managed to capitalize on one of its first three attempts against Berdin.
The goal came after Phillips caused a Moose turnover in the neutral zone. The puck found its way over to Pettersen, who skated in with Phillips on a two-on-one. Pettersen, who had switched spots Connor Zary in the third period and found himself on the top line, made a perfect pass onto the tape of his new winger. Phillips made no mistake and beat Berdin for his third goal of the season.

There is ice in Matthew Phillips' veins. Creates the turnover, scores the 2-2 goal. #AHLHeat

(Pardon the lag — it's in the feed itself, I tried refreshing). pic.twitter.com/S7lg4Ii2us

The Heat started to inch closer to the Manitoba in the shot department as the third period progressed, although Zagidulin still had to be counted on to make a couple saves on partial breakaways past the halfway point of the final frame.

Again, pardon the lag — it's an AHLTV thing.

Ruzicka has been a bit careless with the puck tonight and he owes Zagidulin a nice dinner after this one. #AHLHeat still tied at two, 5:00 to play in regulation. pic.twitter.com/cUOv2yodxB

Zagidulin saves the day in the final minute. This game is heading to overtime. #AHLHeat pic.twitter.com/MnJ9I1U5hC

As was the case in Monday’s contest, this game went to overtime. The Heat quickly dispatched the Moose in the last meeting, with Glenn Gawdin firing home the game-winner just 37 seconds into three-on-three play, and they showed that same killer instinct on Wednesday.
Johnny Gaudreau has shown great talent in three-on-three overtime with the Calgary Flames. Phillips, perhaps his AHL equivalent, displayed similar prowess in tonight’s clash, successfully battling to maintain possession in the neutral zone before re-gaining the puck in close proximity to Berdin and making the goaltender look silly with a great move.

Matthew Phillips wins it in overtime with his second of the night for the #AHLHeat. Full OT below.

After a quiet start to the game, Phillips scored back-to-back goals to tie and win the game. He now leads STK in scoring with 13 points (4 goals, 9 assists) in 9 games. #CofRed pic.twitter.com/HVJauPkX7p

Advertisement
Ad
Advertisement
Ad
Phillips now leads the Heat with 13 points (four goals, nine assists) in nine games and ranks among the AHL’s best with a 1.44 points-per-game pace. If he continues playing at this level, he should soon find himself in a new league.
Stockton recorded the only two shots of the overtime period but trailed Manitoba, overall, by a 31-30 margin.

Pettersen continued on Wednesday where he left off on Monday, scoring the opening goal and setting up Phillips’ game-tying effort. He saw significant time with the top line in the final period and looks to be coming into his own as a consistent AHL contributor. It’s easy to forget he’s only 20.
Zagidulin held the fort after allowing an early goal in the second period. He denied the final 22 shots levied in his direction, including multiple breakaways as regulation time wound down. He now owns a 2-0-0 record this season to go along with a .900 save percentage.

“Matty Ice” is red-hot. After a point-less effort against the Marlies on Saturday, Phillips has posted back-to-back two-point games and is finally beginning to score goals for this Heat team.
Advertisement
Ad
Advertisement
Ad
Phillips drives the bus for the Heat. His consistent excellence is finally being reflected in the points column, where he rightfully now leads the team. The Flames would be smart to look at rewarding their burgeoning young talent with call-ups, and Phillips should be at the front of that line.

The Heat and Moose have little time to breathe after Wednesday’s contest; they’ll be right back at it Thursday at 5 p.m. MT for the penultimate meeting of their four-game series. You can catch the game on AHL TV; I’ll be posting updates on Twitter at @miketgould.