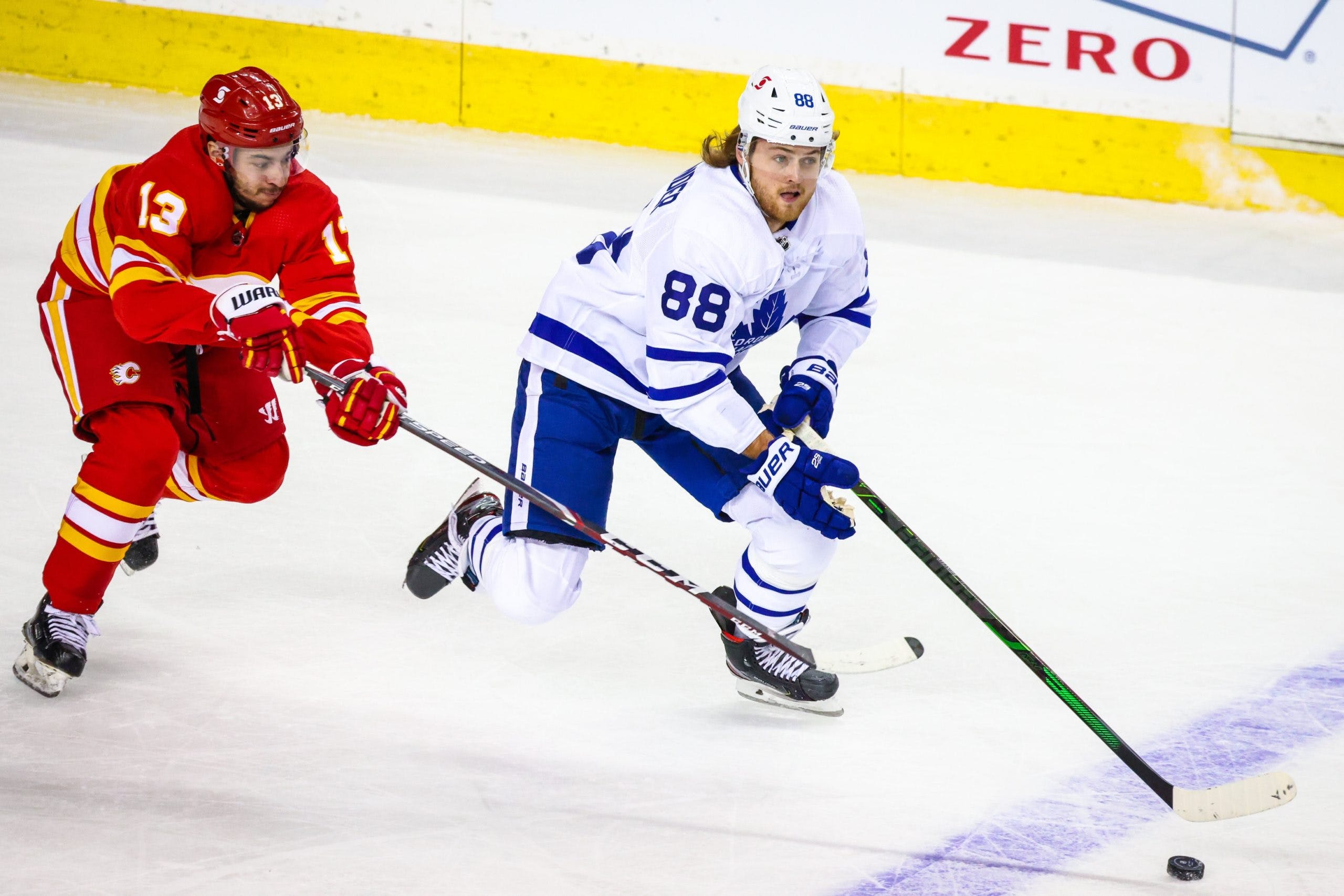 Photo credit: Sergei Belski/USA Today Sports
By Ryan Pike
1 year ago
Comments
The Calgary Flames were flat-out bad in the opening 20 minutes against the Toronto Maple Leafs on Tuesday night. The remaining 40 minutes were good enough to give them a fighting chance, but they just couldn’t muster enough consistency or execution and they dropped a tight 4-3 decision to the Leafs, their second consecutive loss in regulation.

There’s no dressing it up, folks: the Flames weren’t very good in the opening period. The Leafs scored early off the rush; Juuso Valimaki and Nikita Nesterov steered Justin Holl towards the side boards, but he flung the puck on net. Jacob Markstrom booted out a rebound and Wayne Simmonds snuck behind Mikael Backlund and got a couple chances, burying his own rebound to make it 1-0 Toronto.
Derek Ryan drew a penalty but the Flames did nothing on the advantage, with Elias Lindholm taking a minor to negate the second minute of the power play. On the eventual Leafs PP, Auston Matthews clanged a shot in high off the post to make it 2-0 Toronto.
Advertisement
Ad
Advertisement
Ad
The first Flames shot was registered 15:43 into the period, and that one was originally tallied as a missed shot but changed late in the period. Shots were 10-1 Leafs and scoring chances 6-4 Leafs in the opening period.
The Flames got on the board early in the second period, though. Johnny Gaudreau both started and finished the play: he flung the puck up the boards to Noah Hanifin, and then grabbed a feed from Sean Monahan and put it past Frederik Andersen to cut Toronto’s lead to 2-1.

Make it a 5⃣-game point streak for Johnny AND Mony! pic.twitter.com/ilzSDR0Ff6

But Toronto scored on their very next shot on net, as a charging Travis Boyd took advantage of a flat-footed Nesterov and chipped a shot through Markstrom to make it 3-1 for Toronto.
Advertisement
Ad
Advertisement
Ad
But the Flames found their legs and swagger as the second period chugged along and eventually they were rewarded. After the Leafs missed the net on a two-on-one rush, Valimaki joined the rush going the other way, entered the zone and held onto the puck. He flung a pass up the boards, but it ricocheted off Alex Kerfoot’s skates and went right to Milan Lucic. Lucic fired the puck past Andersen to cut the Toronto lead to 3-2.

Shots were 18-5 Flames and scoring chances 17-10 Flames in the second period.
Simon draws penalty, third Flames PP cashes in. Retreival off dump-in, Monahan to Gaudreau, sniped it short-side on Andersen to tie game at 3-3.

Advertisement
Ad
Advertisement
Ad
But the Leafs retook the lead, as Mitch Marner fired a one-timer in the high slot from a Matthews feed and it zinged past Markstrom to make it 4-3 Toronto.
The Flames drew a late penalty and pulled Markstrom for the extra attacker, but they just couldn’t generate anything and this game ended as a Flames loss in regulation. Shots were 7-6 Flames and scoring chances 5-4 Flames in the third period.

In a word? Execution. While they were much sharper later on, the opening period featured the Flames showcasing missed shots, missed passes and missed assignments and all of those factored into the deficit they faced throughout the game.
Backlund missed Simmonds on the first Leafs goal. A general PP malaise led to Lindholm’s penalty and the second Leafs goal. Nesterov lost Boyd on the third Leafs goal. Valimaki blindly flung the puck up to the point in his own zone on the fourth Leafs goal. Those gaffes combined with three flat PPs (out of four man advantages) and that was the difference overall.
Advertisement
Ad
Advertisement
Ad
But man, that opening 20 minutes was rough.

It has to be Gaudreau. He was constantly dangerous and had the Leafs on their toes all game.
Stick-taps to Lindholm and Tkachuk, who were also great. And while his stat line wasn’t sparkling, Valimaki looked strong.

After the Flames had played so well and managed to tie up the game, Marner’s one-timer goal to give the Leafs the lead again was a back-breaker.

With two goals tonight (so far), #Flames F Johnny Gaudreau has tied Tom Lysiak with 155 for 15th on the all-time franchise leaderboard.

Two points has him at 452, tied with Eric Vail for 10th on the all-time franchise leaderboard in that category, too. #Flames

The Flames (2-2-1) are hitting the road. They visit Bell Centre to face the Montreal Canadiens on Thursday night. And then again on Saturday, too.