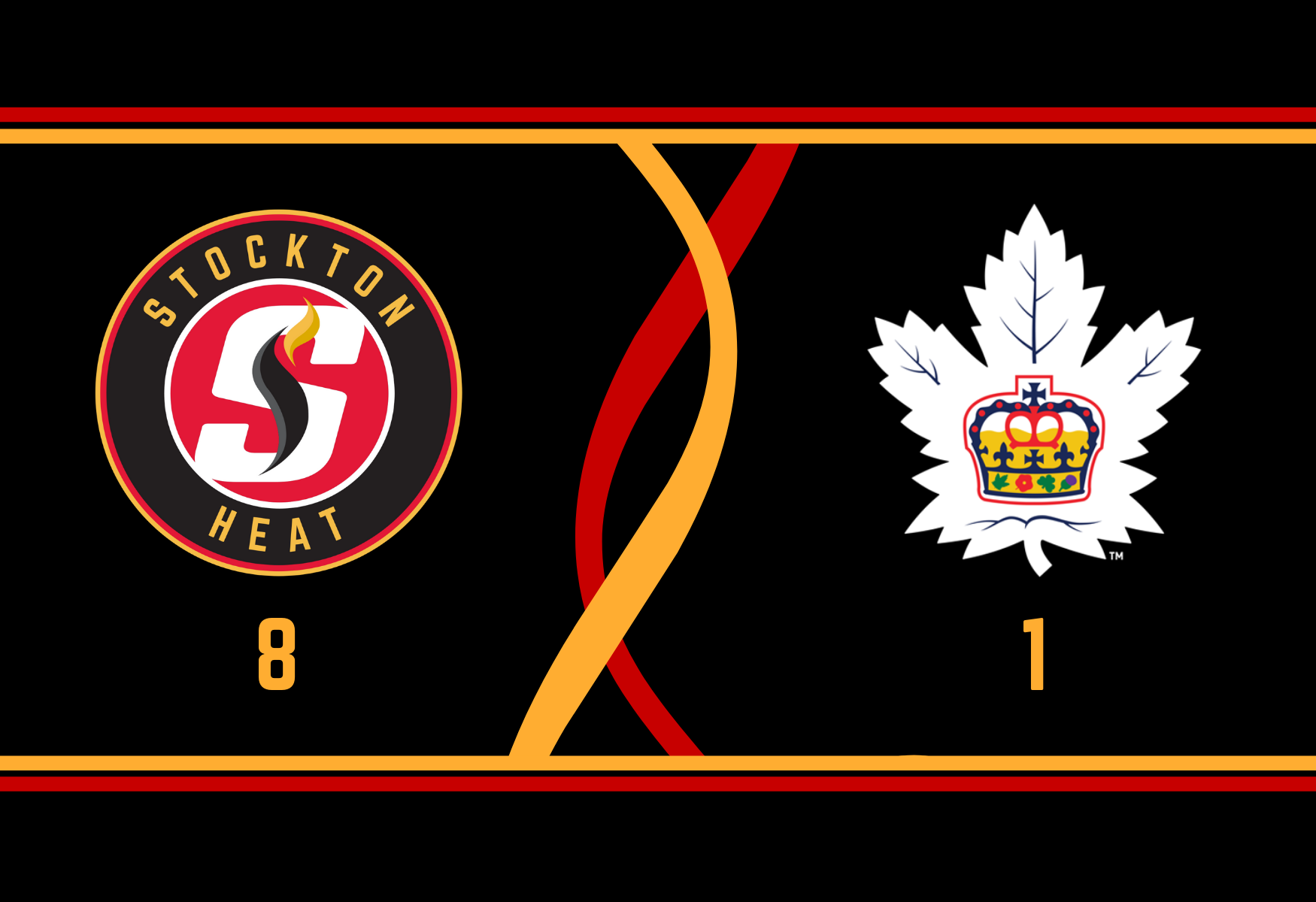 Photo credit: Graphic by Mike Gould.
By Mike Gould
1 year ago
Comments
The Toronto Marlies got a taste of their own medicine on Friday afternoon.
After destroying the temporarily-relocated Stockton Heat by 7-1 and 5-1 scores earlier this week in the first two AHL games played in the Scotiabank Saddledome this season, the Marlies dropped a 4-2 decision to the Heat on Wednesday before being blown out on Friday.
In the final game of their lengthy home series against the Marlies, the Heat scored six goals by the time their opponents had mustered six shots. Fresh off his electric 36-save performance in Wednesday’s win, Heat goaltender Dustin Wolf had a quieter night in his crease. The 19-year-old WHL-bound keeper made 26 saves on 27 shots en route to his second professional victory.
Instead, Stockton’s big guns stole the show. Adam Ruzicka and the “Killer Ps”—Emilio Pettersen, Matthew Phillips, and Martin Pospisil—all had multiple points for the Heat, while rookie centre Mark Simpson chipped in the first two goals of his professional career.
Advertisement
Ad
Advertisement
Ad
The Heat ultimately took this one by an 8-1 score, a result that accurately represents their level of play in the game. Here’s how it all went down.

The Heat went two-for-four on the power play on Wednesday and they received no shortage of opportunities to continue that trend on Friday.
Marlies forward Bobby McMann took a tripping penalty just 1:33 into regulation and, although the Heat couldn’t capitalize, the infraction set the tone for the rest of the game. After former Anaheim Duck and current Marlie forward Kalle Kossila got called for a hook at 6:07, the Heat went right back to work and converted.
First-year pro Emilio Pettersen opened the scoring with a tremendous display of hand-eye coordination, batting a puck into the net out of mid-air after a point shot by Alex Petrovic had bounced skyward off Marlies goaltender Andrew D’Agostini.
Advertisement
Ad
Advertisement
Ad

#CofRed prospect Emilio Pettersen with a delicious goal, the first of his professional career.

He opens the scoring for the #AHLHeat on the power play. It remains 1-0 midway through the first period. pic.twitter.com/jwaRMkEyH0

Pettersen’s goal gave the Heat their first 1-0 lead of the year, but it wouldn’t last. Just under four minutes later, Marlies defenseman Timothy Liljegren sent a wrister towards Wolf’s cage that beat the screened goaltender.

Dunno if Wolf ever saw this shot from Liljegren but, alas. It's 1-1. #AHLHeat #CofRed pic.twitter.com/hklXpii1TE

Pettersen continued to stand out after his goal on Friday, making active plays in both the offensive and defensive zones for Stockton. He was eventually named the third star of the game.
Advertisement
Ad
Advertisement
Ad

Emilio Pettersen with a turnover at the offensive blue line (bad) but a nice recovery on the backcheck (good!)#CofRed #AHLHeat pic.twitter.com/0rMgo38DUv

Stockton regained its one-goal lead late in the opening frame, and it came from an unlikely source. 25-year-old centre Mark Simpson, fresh off a four-year tenure with the U. of New Brunswick Reds, has been in and out of the Heat lineup to begin the season and has been deployed primarily in a defensive role.
Nevertheless, it was Simpson who managed to get a piece of a long shot by Zac Leslie, changing its direction enough to elude D’Agostini. Simpson’s first goal as a professional eventually would stand as the game-winner.

Nice tip by Simpson, fresh off a four-year tenure with the U. of New Brunswick. #AHLHeat lead 2-1 off the big centre's first pro goal. pic.twitter.com/ASPnVpy9nV

Advertisement
Ad
Advertisement
Ad
Just over a minute later, the Heat found some insurance. Check out the fancy footwork from Matthew Phillips to set up Adam Ruzicka for a back-door tap-in.
This goal was the third in just two games for the Ruzicka-Phillips combination, and there was more to come.

Holy mama, Matthew Phillips. What a play to set up Adam Ruzicka's third goal in two games. Connor Mackey picks up the other (well-deserved) helper.#AHLHeat lead 3-1 late in the first. #CofRed pic.twitter.com/XprUh5xCWW

The Heat exited the first period leading 3-1 and up 10-3 on the shot clock. They quickly picked up where they left off after the intermission, with Luke Philp adding to the lead with a power play goal just 1:05 into the second frame.
Advertisement
Ad
Advertisement
Ad
Dmitry Zavgorodniy, jostling for position in front of D’Agostini, picked up his first professional point with a primary assist on Philp’s goal.

Luke Philp gets his second of the year, Dmitry Zavgorodniy picks up his first AHL point on the play. At this point, the #AHL heat led 4-1… #CofRed pic.twitter.com/BwqOpW7yOM

From there, it quickly turned into a rout. With Connor Zary and Kristians Rubins both in the box on offsetting penalties, the game moved to a four-on-four environment for two minutes and Ruzicka quickly took advantage.

Moments later, Ruzicka came inches away from getting his first hat trick as a professional. Despite the near miss, his line continued to apply pressure and controlled play for a whole minute in the Marlies’ zone.
Advertisement
Ad
Advertisement
Ad

I am posting this entire #AHLHeat shift because you all deserve to see it.

Simpson then scored his second of the night (and as an AHLer) to make it a 6-1 game. Bonus points to Flames 2020 first rounder Zary for his amazing pass to find Simpson in the slot.

Just as a reminder, at this point, the game had yet to reach its halfway mark.
Advertisement
Ad
Advertisement
Ad
The Heat made it 7-1 at the 12:40 mark of the period when Martin Pospisil out-waited D’Agostini before placing a perfect wrister over the sprawled Marlies goaltender.

Really like Pettersen's movement on this shift. Nice pass by Leslie to set up Pospisil for his first of the year. #AHLHeat lead 7-1. #CofRed pic.twitter.com/DAvW2zAsIh

To cap things off in the middle period, Phillips made a ridiculous move to score a power play goal in the dying minutes. Surprise, surprise: Ruzicka assisted on the 8-1 tally.

I think I would break both my wrists if I tried to pull off this move that Matthew Phillips just made.

With the game largely decided entering the third period, things began to heat up.
Advertisement
Ad
Advertisement
Ad
Pospisil completed his first AHL Gordie Howe hat-trick in the final 20, taking exception to a knee-on-knee hit thrown on Phillips by Marlies forward Colt Conrad. Phillips fell to the ice and Pospisil immediately lunged at Conrad to stick up for his team’s star.
The heavily-penalized incident ended Pospisil’s night but earned him the praise of his coach in the post-game press conference.
“[Pospisil] plays hard, he makes good offensive plays,” said Heat head coach Cail MacLean. “At the same time, at the drop of the hat, if someone threatens someone in his family, he’ll go right after them.”

Advertisement
Ad
Advertisement
Ad
The Marlies made a solid push in the third period, out-shooting Stockton by a count of 15-3, and Wolf had to be sharp to preserve his team’s seven-goal lead. He put his excellent reflexes on display to deny a goal from Kossila with his right pad.

Not the greatest replay angle, but man — this save by Wolf was incredible in real time. I have no idea how he got his pad out that quickly. #AHLHeat #CofRed pic.twitter.com/ywdze3cGi2

Even with the result in no doubt, Zary kept competing until the final buzzer and was right in the thick of an inspired scrum behind the Marlies’ net after the end of regulation time.

Advertisement
Ad
Advertisement
Ad
With the big win, the Heat now possess a .500 points percentage on the year and sit in a tie with the Marlies for third in the Canadian Division. After being outscored 12-2 in the first two games of the year, the Heat have now scored 14 goals this season and have allowed 15.

They scored first and they scored often, remaining engaged physically and on the puck all day long. Wolf had another terrific performance despite allowing another early goal. The Marlies failed to convert on their two power plays while Stockton went three-for-five on theirs.
Phillips and Ruzicka were able to operate without much in the way of opposition or response from the Marlies. Simpson and Colton Beck provided depth scoring, both contributing two points. After being stymied by extremely impressive performances from D’Agostini, the Heat finally figured out the Toronto goaltender.
Advertisement
Ad
Advertisement
Ad

There are many, many candidates.
However, today’s distinction goes to Emilio Pettersen, who got the Heat on the board, showed some 200-foot responsibility, and put his impressive skating on display both with and without the puck. Pettersen now has three points in four games since turning pro.

The Heat are heading on the road! They’ll be back in action next week, doing battle with the Belleville Senators at the 4,365-seat CAA Arena on Mar. 3 at 5:00 p.m. MT. You can catch the game on AHL TV; I’ll be posting updates on Twitter at @miketgould.