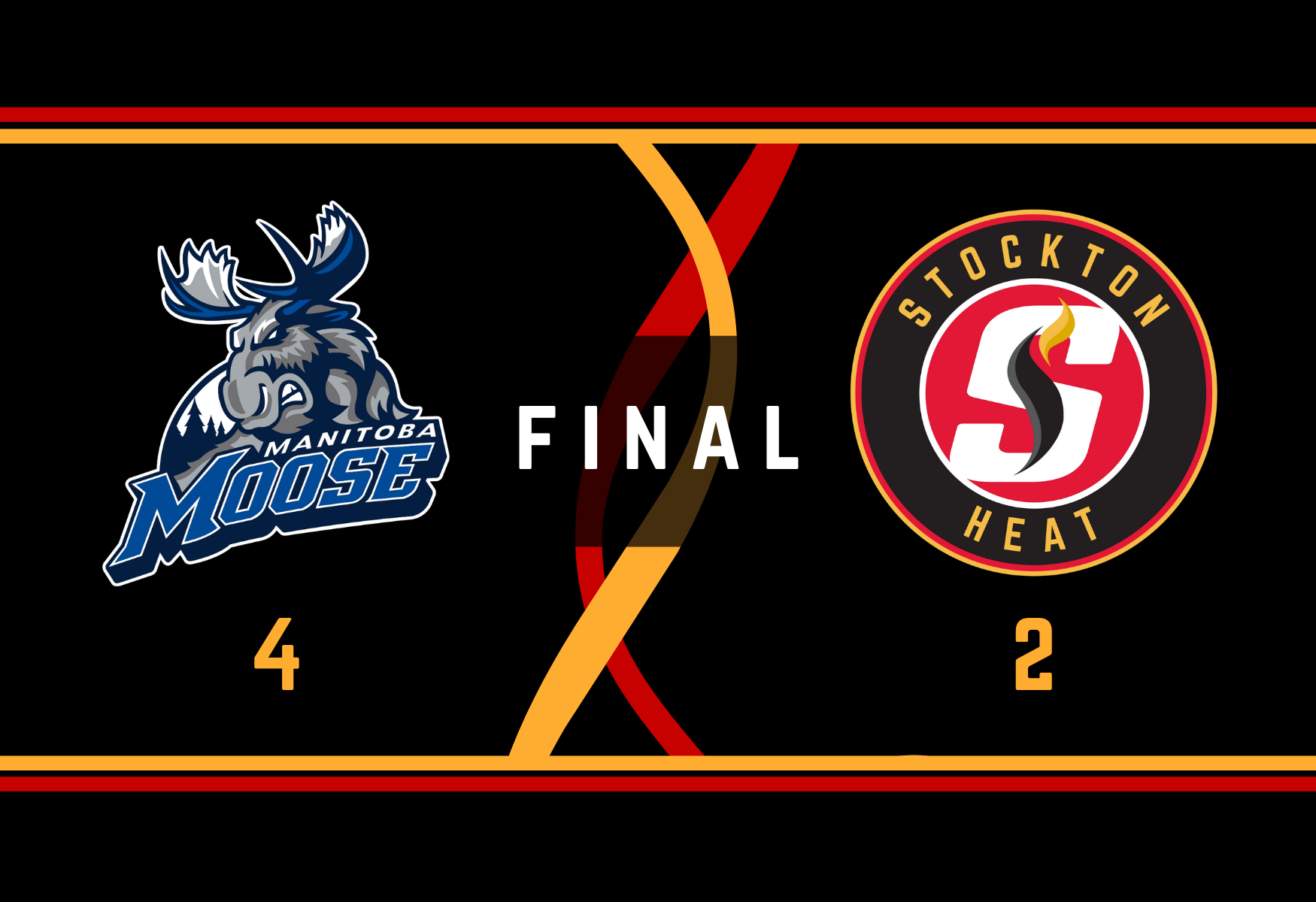 Photo credit: Graphic by Mike Gould
By Mike Gould
1 year ago
Comments
All good things must come to an end.
The Manitoba Moose ended the Stockton Heat’s eight-game winning streak on Saturday, stifling the visitors’ attack and pulling out a 4-2 victory on home ice.
Even with the loss, the 8-3-0 Heat currently enjoy a comfortable lead atop the AHL’s Canadian Division. Manitoba (7-7-2) is back in the win column and at a .500 points percentage on the season.
Artyom Zagidulin made 36 saves for the Heat; at the other end, Eric Comrie only had to face 21 shots and stopped 19 of them for the victory in his first AHL contest of 2020–21.
Rob Hamilton and Matthew Phillips scored goals for Stockton. Saturday’s game was Phillips’ first one-point outing of the season, with the winger having scored multiple points in six of his first 10 games (he was held off the board in the other four).
Advertisement
Ad
Advertisement
Ad
David Gustafsson and CJ Suess scored for the Moose before Cole Perfetti broke the 2-2 deadlock in the third period with his third AHL goal. Ville Heinola scored an empty-netter late in regulation time to seal the win.
Stockton exits this four-game set against the Moose with a 3-1-0 record in the season series; Manitoba, meanwhile, is 1-1-2 against the Heat this year.

The Moose held the edge in Saturday’s contest from the opening face-off, recording seven of the game’s first 10 shots. After getting Thursday’s game off, Heat goaltender Artyom Zagidulin returned to the lineup and acquitted himself well in the series finale.
Stockton finally managed to start pressing after Jimmy Oligny was called for a roughing minor at the 8:14 mark of the period. The Heat fired five shots on the ensuing power play, with the final three coming off the stick of Adam Ruzicka. Comrie was up to the task.
Advertisement
Ad
Advertisement
Ad

Phillips sets up Ruzicka for a one-timer but Comrie makes a tremendous save. #AHLHeat pic.twitter.com/Hwe5oFBQRS

After failing to convert on another man-advantage, the Heat found a way to open the scoring late in the first period. Defenseman Rob Hamilton has been a scratch six times this year but he was in the lineup on Saturday and made his mark with the opening tally 15:15 into regulation time.
Hamilton’s goal was assisted by Giorgio Estephan and Luke Philp. Estephan has now recorded an assist in each of his three games this season; the Heat have now scored the first goal in eight consecutive games.

Stockton failed to preserve its one-goal lead into the intermission. After stopping Manitoba’s first 16 shots, Zagidulin was fooled by a long-range one-timer off the stick of David Gustafsson. Dylan Samberg and Ville Heinola picked up the helpers on the game-tying tally.
Advertisement
Ad
Advertisement
Ad

Huge goal for David Gustafsson to tie the game in the dying seconds of the first period. #AHLHeat deadlocked at 1-1 with the Moose after one period. pic.twitter.com/Z8dewkgPTN

After the two teams traded fruitless power play opportunities to begin the second period, the Moose finally seized an all-important lead with a goal from the crafty CJ Suess. He redirected a point shot from Declan Chisholm by Zagidulin with 4:23 to play in the middle frame; Hayden Shaw also assisted on the go-ahead marker.

The Heat managed to flip the script from the first period by scoring a late goal of their own in the final minute of the second 20. With 34 seconds to play, Matthew Phillips took a pass from Glenn Gawdin and skated in all alone on Comrie before flipping a shot over the glove and under the crossbar.

Matty Ice does it again for the #AHLHeat.

Phillips ties it at 2 in the final minute of the second period. Gawdin and Kirkland pick up the assists. pic.twitter.com/mIi0JkfjcP

The Heat ultimately lost this game but Zagidulin did all he could to keep his team in it. With Stockton’s skaters caught on an unfortunate line change, Kristian Reichel received a quick transition pass and skated in all alone on the Russian goaltender. Zagidulin made a tremendous save to keep the score even.
Advertisement
Ad
Advertisement
Ad

Zagidulin has needed to be perfect here in the third period. Huge save on Reichel to keep it 2-2. #AHLHeat pic.twitter.com/wN5rp1zVVL

Gawdin took a two-minute slashing penalty 6:10 into the final frame and the Moose wasted no time in capitalizing. 2020 first round pick Cole Perfetti beat Zagidulin on a one-timer from the right circle for Manitoba’s third goal of the night and his third career AHL goal.

Perfetti gives the Moose the lead. The #AHLHeat still don't have a shot in this period. pic.twitter.com/KA3YOpnIYM

It took the Heat 10 minutes and 55 seconds to record a shot in the third period—they would only record three in the final frame. Ruzicka led all Heat skaters with six shots in the game and his final opportunity of the night came extremely close to tying the game for his team.

Stockton's first shot of the period (!!) is a good one. Comrie comes up big#AHLHeat trail 3-2 pic.twitter.com/S4pHvIJygw

As the minutes ticked down in regulation time, Heat forward Martin Pospisil sought to use his physicality to give his team a spark. He caught Perfetti with his head down late in the third period, causing the Manitoba rookie some discomfort. Pospisil was not assessed a penalty on the play.
Advertisement
Ad
Advertisement
Ad

😬 Cole Perfetti took a while to get up after taking this hit by Martin Pospisil.

The Moose rookie went straight to the room. #AHLHeat pic.twitter.com/aboyXjlg8U

Heinola eventually added an empty-net goal with 99 seconds left in the third period. Manitoba took this game by a 4-2 score and outshot the Flames by a 40-21 margin.

The shot count in this game favoured the home side by close to a 2:1 ratio. Zagidulin was excellent but, at a certain point, he ran out of big saves. The Heat failed to give him much in the way of run support.
Advertisement
Ad
Advertisement
Ad
Manitoba held Stockton off the board in all three of its power play opportunities; meanwhile, the Moose scored the game-winning goal with the man-advantage.

It has to be Zagidulin, although Gawdin deserves an honourable mention for his beautiful play to set up Phillips’ equalizer. Gawdin, who will turn 24 in two weeks, now has four points (one goal, three assists) in his last five games.
The loss was Zagidulin’s first of the season but his .923 save percentage in the game improved his figure for the year to a .908.

Stockton is coming back “home” to Calgary! The Heat will embark on a four-game series against the Laval Rocket beginning on Mar. 18 at 6:00 p.m. MT. You can catch the game on AHL TV; I’ll be posting updates on Twitter at @miketgould.
Advertisement
Ad
Advertisement
Ad