Advertisement
Ad
Post-Game: That’s it, back to .500 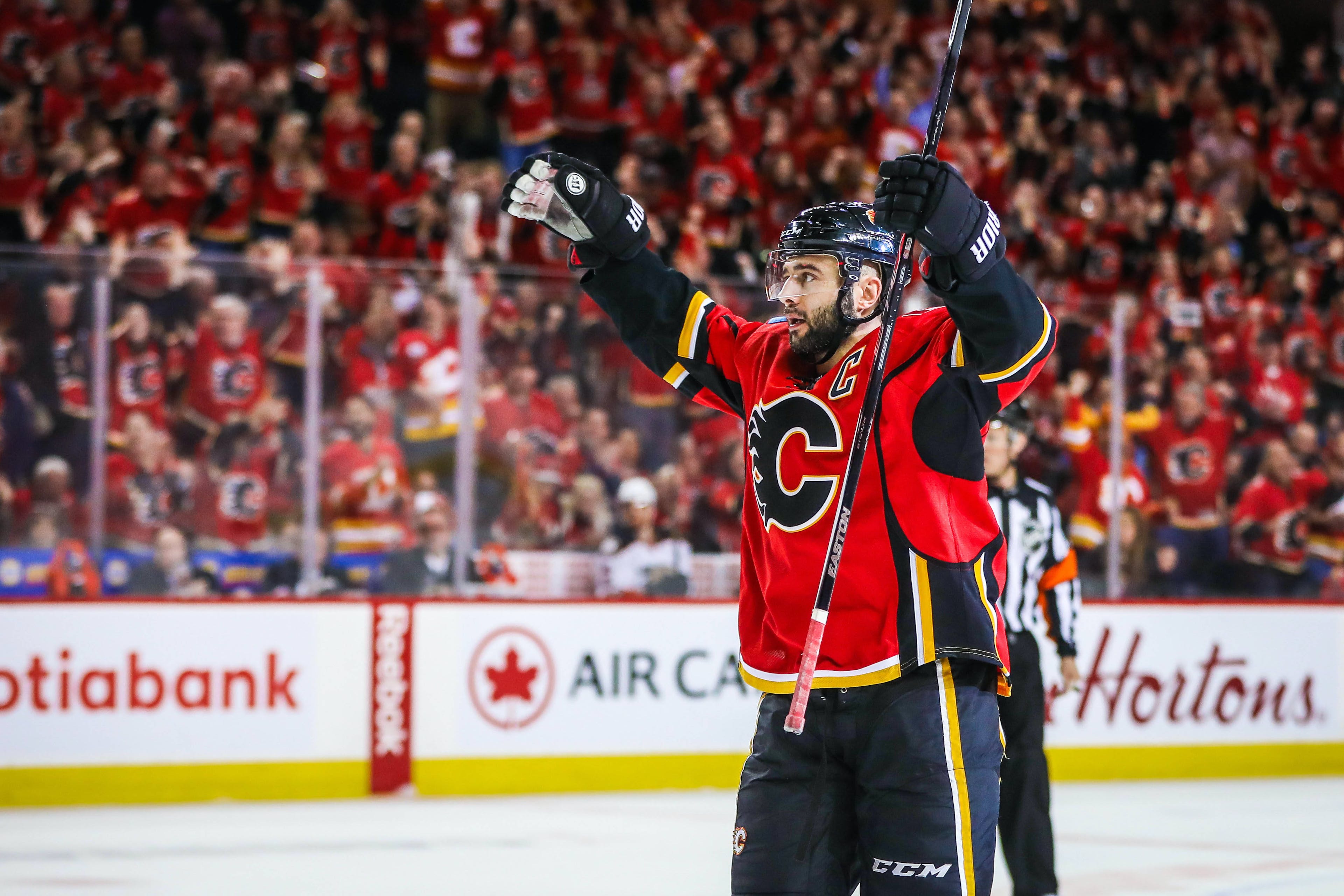 Photo credit: Sergei Belski / USA Today Sports
By Ryan Pike
5 years ago
Comments
Heading into tonight’s game with the powerhouse Washington Capitals, the Calgary Flames had played an uneven stretch of games. Good even strength play was undone by poor special teams and bounces seemed to snowball at the worst possible time. The Flames responded to some strong words by their head coach after their last loss with perhaps their best game of the season in a very structured, measured and occasionally very entertaining 2-1 victory over the Capitals.
The win propels the Flames back to the dizzying heights of the .500 mark with a 6-6-0 record to close out October.

The opening period was pretty even, though the Flames managed to both (a) play with speed and poise and (b) take two penalties that they successfully killed off. Shots were 14-12 Flames and scoring chances were even at 9-9.
The Flames opened things up a bit in the second, in the sense that they were good and got some nice scoring chances from basically every single line. A smart play by Johnny Gaudreau inside the offensive blueline led to a goal – pay attention, that’ll be a theme tonight. Gaudreau got into the Capitals zone and dished the puck off to Brett Kulak at the point, whose point shot was slightly redirected by Micheal Ferland to make it 1-0.
Advertisement
Ad
Advertisement
Ad

A Poisonous combo (get it? Brett + Micheals?) pic.twitter.com/dOd0DKmzBe

The Flames had a couple chances later on, but couldn’t bury them. Shots were 15-10 Flames and chances were 15-6 Flames. (It was not an even period.)
Right after a weird icing call – the Flames beat the Capitals to the hashmarks but it was called icing anyway – Washington tied the game up in the third. A clearing pass bonked off a linesman and off the ensuing confusion, Jakub Vrana’s shot eked through Mike Smith’s pads and into the net to make it 1-1. But just when it seemed like bad bounces would undo the Flames once again, Gaudreau made Gaudreau things happen. He led the rush into the Capitals zone and bobbled an attempted pass, then recovered and circled back, finding Sean Monahan beside the net for a tap-in and a 2-1 lead.
Advertisement
Ad
Advertisement
Ad

Keep an eye on this kid, we think he could be pretty good pic.twitter.com/fmtrui9O4g

The Capitals pulled their goalie late but it resulted in zero goals and the Flames won. Shots were 9-9, but scoring chances were 4-3 for the Flames.

Why The Flames Won

The Flames were better at even strength then Washington was, as they have been recently many times. But they largely stayed out of the box and their penalty kill was much better than it has been in recent weeks. Plus, when Gaudreau is as good offensively as he was tonight, it’s a good step on the road to victory.

It’s gotta be Gaudreau, who was in on both goals. But Monahan, Ferland, Giordano, Kulak, Smith and Hamilton were all quite good.

Monahan’s goal, of course. The game was in the balance and the team’s top players played like top players.

Matthew Phillips had two goals, including the game-winner, in Victoria’s 4-3 win over Vancouver. Adam Fox had two assists in Harvard’s season-opening 5-0 win over those stuffed shirts at Dartmouth.

Great stuff from #Flames star Johnny Gaudreau on what it's like to have puck on his stick, see Sean Monahan all-alone in a tie game … pic.twitter.com/OENrtUbmEf

The Flames (6-6-0) are off tomorrow, then begin prepping for Thursday night’s visit from the Pittsburgh Penguins.