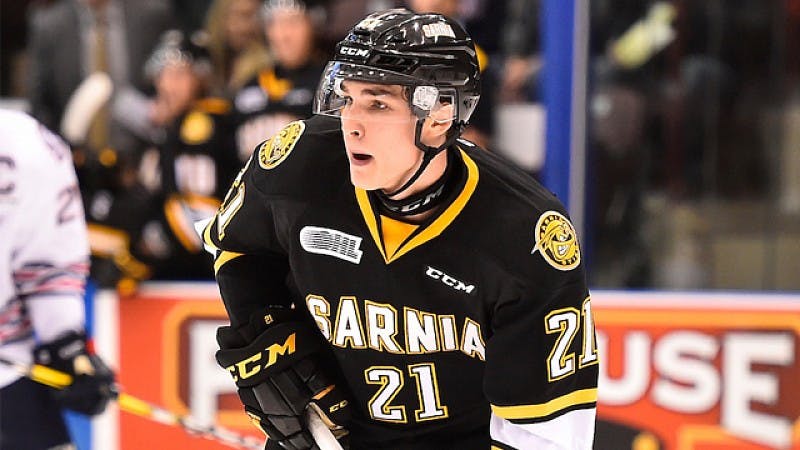 By Taylor McKee
3 years ago
Comments

The 2017 NHL Draft did not provide the Flames with a large number of new prospects, as they had traded away their second and third round selections. This meant that, after drafting Juuso Valimaki in the first round, their next selection was 93 picks away at number 109 where they selected lanky Adam Ruzicka, a 6’4 centreman from the Sarnia Sting.

Prior to the draft, there was a lot of uncertainty surrounding Ruzicka. Here’s what J.D. Burke had to say about him prior to his drafting:

Most expected that Ruzicka would hit his stride offensively this season, after joining the Ontario Hockey League’s Sarnia Sting in the second round of the 2016 CHL Import Draft out of HC Pardubice of the Czech Under 20 league. Instead, Ruzicka struggled to make an impact at either end of the ice.

Had Ruzicka hit his stride as so many anticipated, we’d be discussing him as a flag bearer for the Slovakian hockey program, dragging them singlehandedly back into the first round of the NHL Entry Draft. Ruzicka now seems more likely to hear his name called early in the second day of the draft. That reality reflects itself in Ruzicka’s ranking, as the Slovak centre checks in as the 62nd ranked prospect in the Nations Network Prospect Profile countdown.

Corey Pronman, then of ESPN, was unsure about Ruzicka heading into the draft:

Ruzicka disappointed this season after I thought he could be a first round type of player coming into the season. His assist totals weren’t gaudy in the OHL, but I think he has fine vision and can make creative plays. There might have been an issue of pace for him at times in juniors; the talent shines through — but inconsistently. Ruzicka is also able to play a decent power game and shows an above-average wrist shot. His skating is worrisome, however. He has a heavy first step, and though he can skate fine when he gets going, I worry if he’ll be able to put NHL defensemen on their heels.

Clearly, Ruzicka was a worthy gamble in the middle of the fourth round, but his future as an NHL prospect has been relatively uncertain. Plagued by consistency issues throughout his time in junior, earlier this season it seemed unclear whether or not he would have a future with the organization that drafted him.

Thirty-five games into his season, Ruzicka had just 11 goals and, as noted by Christian Tiberi’s diligent prospect updates, was piling up the majority of his points on the powerplay and with secondary assists, not the dominant performance you would hope for from a player in his D+2 season.

However, Ruzicka’s season, and perhaps professional career, took a major turn when he was dealt to the Sudbury Wolves on Jan. 9, 2019 in exchange for one second and two third round draft picks. Since the trade, Ruzicka has exploded for 41 points in his final 30 games.

I spoke to Mike Commito, team historian for the Sudbury Wolves, about what the Wolves were expecting to acquire when they traded for Ruzicka:

I think what the Wolves were hoping to get, which they did, was that offensive boost down the middle. The Wolves had impressive scoring depth throughout the season but I think that, with the playoffs approaching, Ruzicka was a new offensive weapon to add to the lineup. The move certainly paid off and then some.

Ruzicka scored 24 goals in 30 regular season games with the Wolves, which works out to 54 goals over a full 68-game campaign. To put that number into perspective, the Wolves haven’t had a 50-goal scorer since Norm Milley did it in back-to-back seasons in 1999 and 2000. Dmitri Sokolov came close in 2016-17, but Ruzicka’s scoring clip is certainly one for the Wolves’ record books.

Adam Ruzicka's 30th goal of the season. He added three more last night in the @Sudbury_Wolves 8-4 victory over Hamilton for the first four-goal performance of his @OHLHockey career #Flames pic.twitter.com/trmlYr2tmi

Have a look at one of Ruzicka’s tastier moments from this season, note the way he uses his reach to force the defender’s stick wide before pulling the puck back into the slot.

I asked Commito about Ruzicka’s ability to use his frame effectively during his time in Sudbury and he specifically referenced the goal from the above tweet:

Ruzicka’s done a great job of finding open lanes and driving the net. He’s certainly a big presence in front of the net, but he’s scored just as many goals using his skills and shot. In the Wolves’ game against the Bulldogs on March 15, Ruzicka had a nifty goal where he deked his way through three Bulldogs to go top shelf. Of course, Ruzicka scored four goals that game, for the first time in his OHL career, but that one definitely rises to the top.

One of the hardest parts about keeping tabs on prospects is the fact that, for the most part, it’s very difficult to actually watch them play. In large part, this contributes to the hype surrounding the World Juniors, as it is one of the only ways to see your team’s prized prospects on television without having to resort to grainy streams or Youtube highlights. To this end, I asked Commito to describe something notable about Ruzicka’s play to an audience that does not get the chance to watch him play regularly:

Wraparounds! As someone who grew up watching hockey when wraparounds were still a thing, I love that Ruzicka has the wraparound in his tool belt. One of my favourite goals of his this season (attached), Ruzicka gets open to the side of the net and then muscles the puck around to the other side for a backhand wraparound. It’s a thing of beauty. Besides those nostalgic goals, Ruzicka is just fun to watch because he’s lethal from anywhere on the ice. The veteran centreman can use his size in close or utilize his skills and hands from far out to break in on net or bury an opportunity.

Commito provided this additional gif to me as further evidence of Ruzicka’s wraparound prowess.

It seems as though Ruzicka is a pretty safe bet to earn an ELC when his season ends, though nothing is guaranteed, I suppose. The Flames are not exactly overflowing with depth at the centre position at the AHL level, especially if the organization decides to move on from pending free agents Tyler Graovac, Brett Pollock, Alan Quine, or Curtis Lazar.

With that in mind, it is possible that Ruzicka could turn pro next season in Stockton, but he could also return to junior for his overage season. In any event, the second half of 2018-19 has certainly been a positive one for one of the most intriguing prospects in the Flames system. Whether or not that will translate to the next level certainly remains an open question.

Currently, Sudbury is facing the Mississauga Steelheads in the first round of the OHL playoffs and the Wolves have grabbed a three games to none lead in the series. In the first three games of the series, Ruzicka has notched four assists.