Advertisement
Ad
The good, bad and ugly of the Calgary Flames: Games 36-40 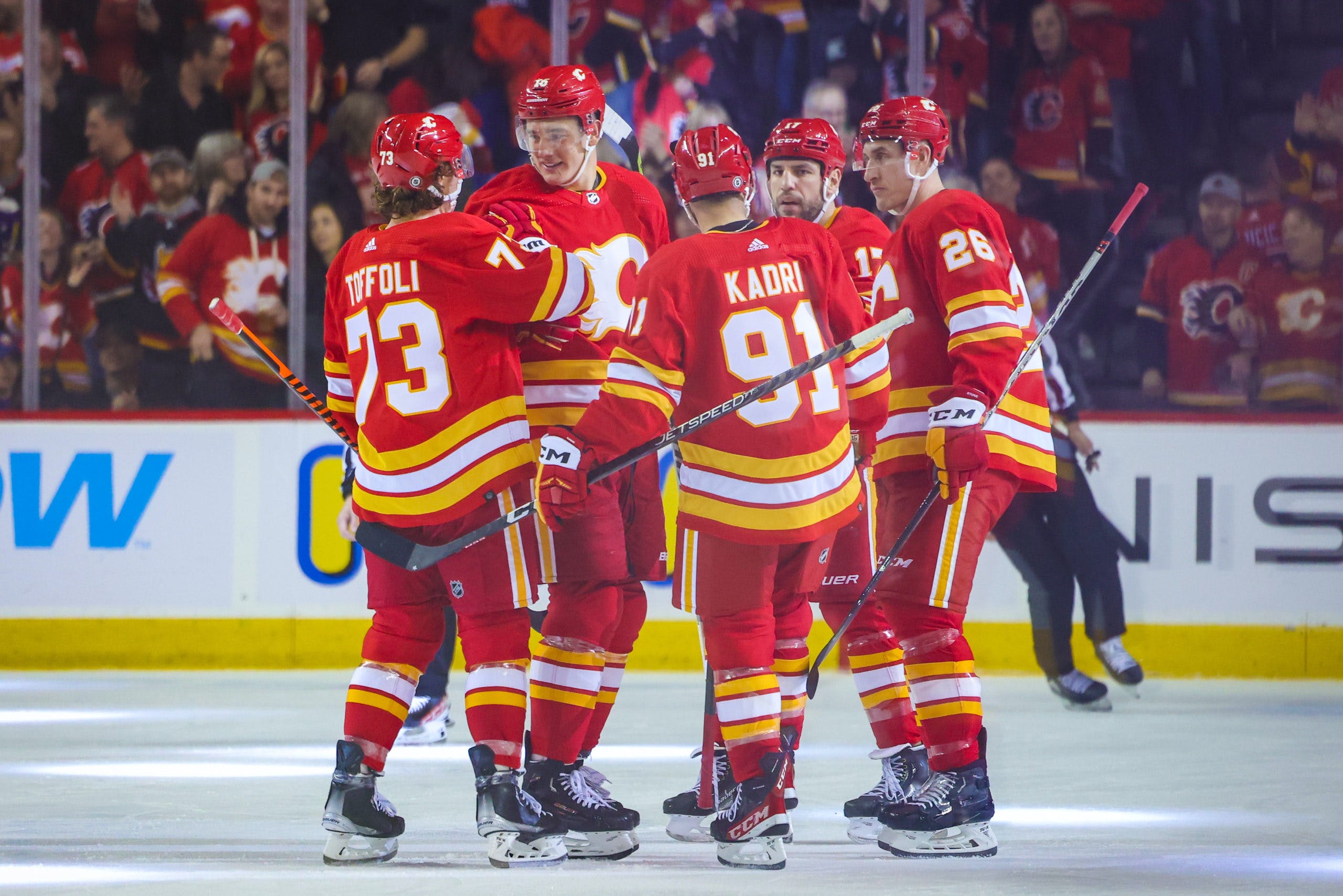 Photo credit: © Sergei Belski-USA TODAY Sports
By Robert Munnich
26 days ago
Comments
The Calgary Flames are coming off a decent stretch of hockey over their last five games. They picked up wins against the Seattle Kraken, Vancouver Canucks and New York Islanders. Played one of their best games of the season against the Edmonton Oilers but couldn’t buy a goal. And then there is the Winnipeg game that was pretty underwhelming.
Let’s dive into some of the good, bad, and ugly of those games!

Team defense is getting better

One thing the Flames have shown in their last five games is that their team defense has been getting better. The Flames only allowed ten goals against in their last five games. As Darryl Sutter always says, “it’s a 3-2 league”. Had the Flames been able to score an average of three goals a game they would have gone either 4-0-1 or 5-0.
You can tell watching the games that the Flames are not giving up many high danger scoring chances at five on five and the penalty kill. They’ve done a great job pressuring opposing forwards to shoot from the outside, and forcing them to make quick decisions with the puck. They are making Jacob Markstrom and Dan Vladar’s lives pretty easy right now.
Advertisement
Ad
Advertisement
Ad
The numbers would back that up too. From Dec. 27 to Jan. 6, the Flames ranked second in CF%, third in SCF%, fourth in xGF%, and seventh in HDCF%. They are controlling the play over the majority of their games spending a lot more time in their opponents end then their own.
The Flames are going to be a difficult team to play against in the second half of the season if they continue this level of play.

Nazem Kadri has been solid for the Flames in this last stretch of games. He is tied for first in scoring with four points in five games, tied for second in shots on goal, and tied for second in shot attempts. You have got to love the effort he brings to the table on a nightly basis. He is playing with a lot of pace and has brought some much-needed swagger and confidence to a team that has needed it.
Advertisement
Ad
Advertisement
Ad
Kadri was also named the to the Pacific Division All Star team. He will likely be the lone Flames representative at the All-Star game in Florida.
One discussion that has gone cold in the first half of the season is around who the next captain of the Flames will be. Right now, I would have Kadri at the top of the list. He has been very impressive both on and off the ice and would make a great face of the franchise.

Return of the Mack

This looks like the MacKenzie Weegar Flames fans had hoped for when acquired by Brad Treliving this past off-season. Not to say Weegar hasn’t been solid. He has been. But he has been more dangerous offensively shooting the puck more, and also picking up his first goal as a Flame against the Vancouver Canucks. Scoring that first goal will likely be a bit of a weight off his back.
Advertisement
Ad
Advertisement
Ad

MacKenzie Weegar scores his first goal as a Flame!

Weegar has been a solid addition to the flames back end this season. He has been one of their more consistent players on a nightly basis.
At five on five, among his teammates Weegar ranks second in CF%, fifth in xGF%, and fifth in SCF%. He’s done all that while being put in a lot of tough match-ups against opposing top two lines.

Jonathan Huberdeau scores! It is great to see him score a big goal.

Jacob Markstrom makes an unbelievable save on Mark Scheifele! pic.twitter.com/oi9A9OawTo

Great save by Dan Vladar! pic.twitter.com/ZbGiN85iGk

Jacob Markstrom makes another save on a breakaway against! pic.twitter.com/1kqRNWXjDB

Milan Lucic just destroyed a Kraken. Take a look at the top of the screen. pic.twitter.com/2cHrKFQxEr

The moment that made Flames fans want to cry

The Backlund shot off the post to end off the game describes the last ten minutes of the game for the #Flames 😢 pic.twitter.com/OU8TXA5QFo

When looking at the numbers of each player from the five-game segment, I was alarmed to see some of the numbers Jonathan Huberdeau put up. In the last five games, Huberdeau scored one goal and one assist. At five on five, he has a team worst xGF% of 48.08% and team worst HDCF% of 32.00%. High danger chances at five on five when Huberdeau was on the ice were 17-8 in favour of the opposition.
Advertisement
Ad
Advertisement
Ad
The eye test would back up those numbers. When watching Huberdeau, you see someone who is not doing a whole heck of a lot with his ice time. You’ll see a nice pass every now and then, but no where near the amount we expected from him coming into the season. My biggest concern with Huberdeau is the pace he plays at when the puck is on his stick. When he receives a puck, you don’t see him accelerate or play at a high speed. He always slows down. He has become too predictable entering the offensive zone. He stops up, spins, and waits to make a pass. It’s becoming too easy to defend him.
Right now, Huberdeau is on pace to put up 57 points in over 82 games. That’s his worst points per game pace since his third season in the NHL in 2014-15.
Advertisement
Ad
Advertisement
Ad
I hate going off like this on Huberdeau. Everyone associated with the Calgary Flames wants to see him succeed badly. But it just hasn’t happened up to this point of the season.
One of the most important things Darry Sutter and his coaching staff are going to have to do in the second half of the season is figure out a way to get Huberdeau back to being at least a point per game player. It needs to happen if this Flames team is going to do any damage come the post season.

Flames prospects at the World Juniors

One of the best parts about watching the World Juniors over the holiday season is getting to watch your favourite teams prospects who are playing in the tournament.
A lot of Flames fans got their first opportunity to watch 2021 second-round pick William Strömgren play for Sweden. And 2022 second-round draft pick Topi Rönni play for Finland.
Advertisement
Ad
Advertisement
Ad
Boy, were the fans treated to some underwhelming performances.
Strömgren played in seven games for Sweden. He registered one assist. Two shots on goal. And was a plus two.
Rönni played in five games registering no points. No shots on goal. Was a plus one. And took two penalties.
Between the two Flames second-round picks, they combined to play in 12 games, record one assist, and combined for just two shots on goal.
These were not the stats of a sixth or seventh round picks by the Flames. These are two second-round picks. Players who were highly rated by the Flames amateur scouting staff. Their performances left a lot to be desired. Especially when you consider the Flames had the chance to draft players like Logan Stankoven and Lane Hutson, who starred for Canada and the USA in this tournament.
Advertisement
Ad
Advertisement
Ad
That does it for this edition of the good, bad, and ugly of the Calgary Flames.
What did you think of the latest five game stretch for the Flames? Let us know in the comments section!