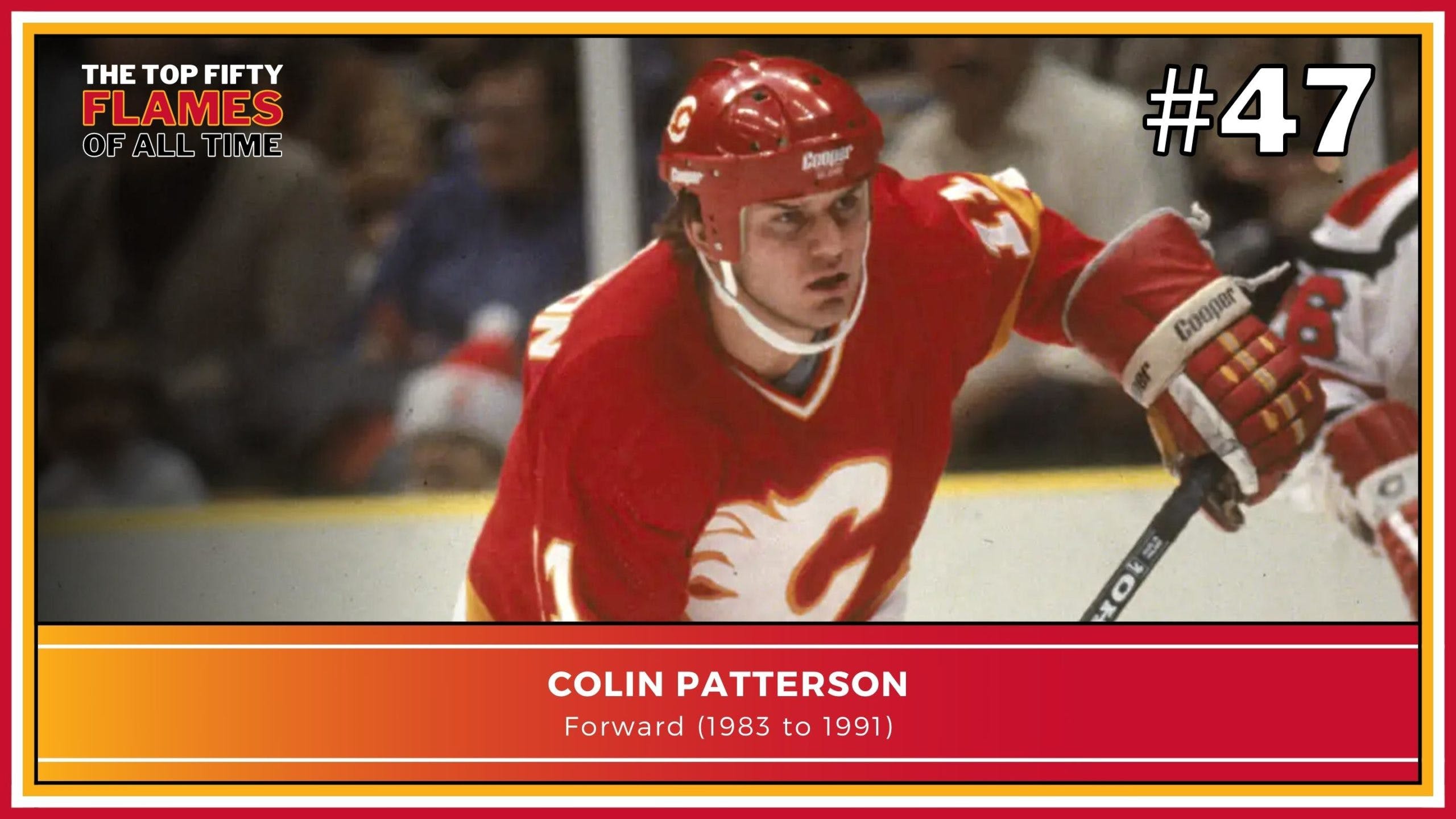 There are some Calgary Flames players that don’t end up being spectacular, usually due to a few factors, but they manage to be absolutely crucial pieces to the team’s puzzle.

Despite some injury woes, Colin Patterson – #47 on our countdown – was one of the top two-way players in franchise history and a key cog in the Flames’ 1980s dominance.

A product of Toronto, Patterson played hockey and lacrosse at a high level in his youth but opted to pursue hockey. He wasn’t drafted by any NHL clubs, so he headed to college at Clarkson University – the same school Chris Clark and Craig Conroy later attended.

The Flames discovered Patterson while scouting another player and ended up signing him following his junior year. (Patterson went on to finish his degree over a few subsequent summers.)

Originally intended to spend some time in the minors with the CHL’s Colorado Flames until he had rounded out his game a bit, Patterson was called up early in the 1983-84 season due to a slew of injuries. Rather than look out of place, he found a great fit on a line with Doug Risebrough and Richard Kromm as that trio’s defensive conscience, and so he never went back to the minors.

From that point on, there were two major hallmarks to Patterson’s game. He was a superb two-way player who could be the quiet “glue guy” on key lines, and he had horrible injury luck. He managed to stay healthy most of the time, though, and it led to a period of time where he was frequently in the Selke Trophy conversation. He was the Selke runner-up in 1988-89, and also received votes in 1986-87 and 1989-90.

The peak of Patterson’s performance was definitely 1988-89. Not only did he finish second in Selke voting, but playing on a line with Doug Gilmour and Joe Mullen he was a huge part of the club’s success. You may remember: they won a Stanley Cup that season.

Unfortunately, Patterson’s injuries then started mounting. He was hurt late in the 1989-90 season and missed the entire 1990-91 with a significant knee injury suffered in the 1990 pre-season. With questions about what he had left in the tank, the Flames traded him to Buffalo in Oct. 1991 for future considerations.

Patterson was a big piece of the Flames’ success in the 1980s and post-retirement, he remains a very active part of their alumni group. For being the Flames’ first awesome two-way forward – and still among the franchise’s best 200-foot players ever – Patterson cracks our Top 50 list.