Advertisement
Ad
Who stood out? Who didn’t? A Flames 2022 Young Stars Classic wrap up 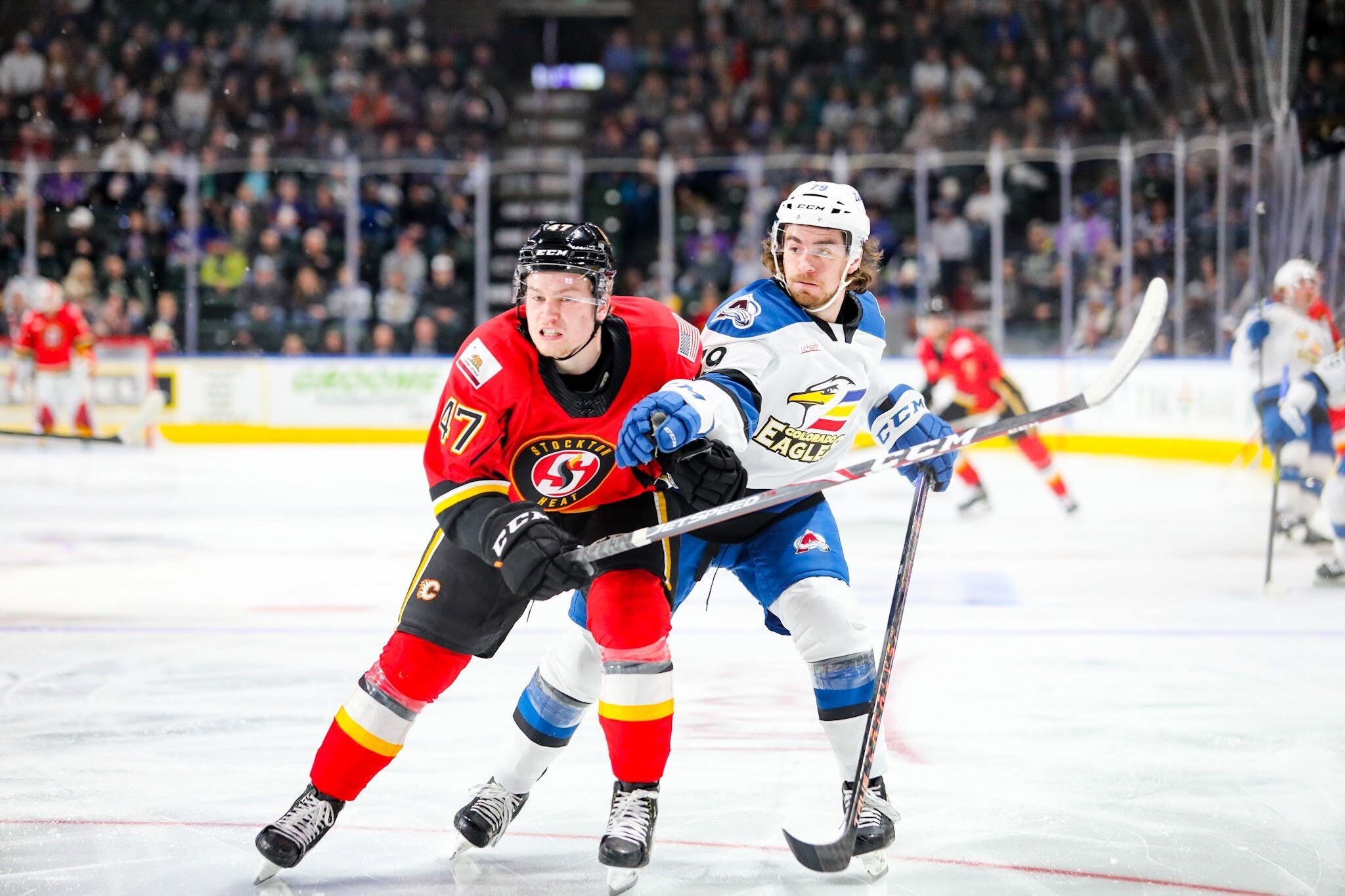 Photo credit: Photo courtesy the Stockton Heat
By Robert Munnich
4 months ago
Comments
The Penticton Young Stars Classic has come and gone. The Calgary Flames finished the rookie showcase with an 0-3 record losing 3-0 to Vancouver, 4-1 to Edmonton, and 5-3 to the Winnipeg Jets. The results on the scoreboard don’t matter; what does matter is how the Flames rookies played.
Here are some thoughts on what we saw this past weekend. Let’s take this analysis with a grain of salt as this was a September rookie tournament.

Who stood out – forwards

Connor Zary
Connor Zary put on a strong performance in each game for the Flames. He was their most consistent, play driving forward on the roster. He carried the puck with a lot of confidence, showed off his silky smooth hands, and impressed with his vision when moving the puck. His performance should be a big confidence booster for Zary and the Flames organization. He was coming off a less than stellar rookie campaign in the AHL. A big reason for that was starting behind the 8-ball with an ankle injury. But good news for Zary is that he was able to rebound and show Flames fans why he was a first-round pick.
Advertisement
Ad
Advertisement
Ad

Connor Zary with a nice end to end rush. pic.twitter.com/jqzMhyCq2d

Connor Zary and Walker Duehr almost connect on a 2 on 1. Zary and Duehr have had a couple of these plays so far in this tournament. pic.twitter.com/7gMPfXE8Sb

Adam Klapka
Adam Klapka was a physical force during the Flames first two games against the Canucks and Oilers. The 6’8″ power forward showed an impressive mix of physicality and skill. He laid out a few bone crushing hits, got into a fight, and also showed some impressive offensive skills. The most impressive part of Klapka’s game was his forechecking. He used his speed and length to his advantage by wreaking havoc in the offensive zone against opposing defensemen. He broke up a lot of plays with his long stick, and also caused turnovers from his physicality. Klapka will be a lot of fun to watch with the Wranglers this season.

Adam Klapka gets in a scrap!🥊🥊 pic.twitter.com/fSPqDiOhzF

Adam Klapka was a physical force on this shift. pic.twitter.com/zm7pVv5QTR

Emilio Pettersen
Emilio Pettersen showed off some impressive skills in all three games in Penticton. I thought he was the most entertaining player to watch in the offensive zone. He is incredibly elusive and shifty when skating with the puck. He played with the most skill of any of the Flames forwards. Pettersen was particularly strong in the first two games of the tournament as he was one of the lone offensive play drivers. He capped off his tournament by scoring a beautiful power play goal from long distance.
Advertisement
Ad
Advertisement
Ad

Emilio Pettersen and Connor Zary put in some good work in the offensive zone. pic.twitter.com/vfNBPtgQLV

Emilio Pettersen and Adam Klapka make a nice play on a two on one.

Emilio Pettersen scores a nice goal. It's nice to see him score. He has been very good in this rookie tournament. pic.twitter.com/HAarb3xZa4

Who didn’t stand out – forwards

Jakob Pelletier
Flames fans expected their 2019 first round pick to be a noticeable, if not dominant player throughout the three games. He struggled at 5 on 5 and on the power play in the first two games against the Canucks and Oilers. He did not generate much offence and didn’t make his teammates better. He did not show Flames coaches and management that he was ready to kick down a door and take a roster spot.
He did make up for it a bit as he played well in game three against the Jets on a line with Connor Zary and Walker Duehr. Pelletier is going to be in tough to make the Flames roster out of training camp with all the NHL bodies ahead of him on the depth chart.
Advertisement
Ad
Advertisement
Ad
Rory Kerins
There was some anticipation to see what Kerins could do in Penticton after a monster 118-point season in the OHL. Unfortunately, he did not have much of an impact in the offensive zone in the two games he played in. I hoped we would see more flashes of creativity, better hands, and more offensive plays in general from the Flames sixth round pick. This by no means is a slight on Kerins. He is still a good prospect for the Flames who happened to have a rough weekend.

Who stood out – defence

Chris Sedoff
Chris Sedoff was the Flames best defenceman in Penticton. The free agent from the Red Deer Rebels was rock solid on the blueline. He seemed to do everything well. Sedoff played a strong defensive game, moved the puck well, played physical, and even scored a goal in the tournament finale on Monday against the Jets. He played important minutes at 5 on 5 and played on both sides of special teams. He was the most pleasant surprise from a Flames perspective in the entire tournament. I thought he significantly outplayed drafted defencemen Cole Jordan, Cameron Whynot and Yan Kuznetsov.
Advertisement
Ad
Advertisement
Ad
Don’t be surprised if gets signed to an AHL contract with the Wranglers. The Flames defensive prospect group is thin to say the least. Sedoff would be a nice addition to the Flames organization.

Chris Sedoff gets the Flames on the board.

This has been an awesome start for the Flames. They are playing an up tempo, skilled game. A nice change of pace compared to the last two. pic.twitter.com/7G2RUcEN0U

Chris Sedoff levels a Winnipeg Jet. He is having one hell of a tournament. It wouldn't surprise me if he got signed to an AHL deal within the next few weeks. pic.twitter.com/GQx1XRkkAT

Jeremie Poirier
Jeremie Poirier showed some flashes of offensive brilliance throughout the three games for the Flames. You can tell that Poirier has a ton of skill and offensive ability. He has all the skills and talent to turn into a very good defenceman at the NHL level.
The knock-on Poirier is his play in his own end and battle level. There were times throughout the tournament when he got beat in the defensive zone badly, like on the Tristan Nielsen goal against the Canucks.

Tristen Nielsen makes it 2-0 Vancouver on a great play on his backhand. pic.twitter.com/poQFRXe26g

But who better to teach him the defensive side of the game than Darryl Sutter and Mitch Love? Those are some great mentors for the young Flames defenceman.
Advertisement
Ad
Advertisement
Ad

Jérémie Poirier makes a nice play off the rush which eventually sets up a scoring chance in the slot. pic.twitter.com/HyjGvPpDWZ

Jerimie Poirier makes a slick play at the blueline. pic.twitter.com/y1z8YZzxx6

Jerimie Poirier shows some good speed and skill on this rush. pic.twitter.com/m3qCEuaFLx

Who didn’t stand out – defence

Flames draft picks Cole Jordan, Cameron Whynot and Yan Kuznetsov were all underwhelming throughout the tournament. I didn’t think any of these players had much of an impact on the game in a positive way for the Flames. Jordan in particular had a difficult time making plays and getting the puck out of his own end. I was surprised that a WHL free agent, Chris Sedoff, outperformed them by a large margin. I think Flames fans were hoping one of those three would really step up and show that they have the potential to be NHL players. I didn’t see that this weekend.
Who did you think performed well at the Young Stars Classic for the Flames? Let us know in the comments!