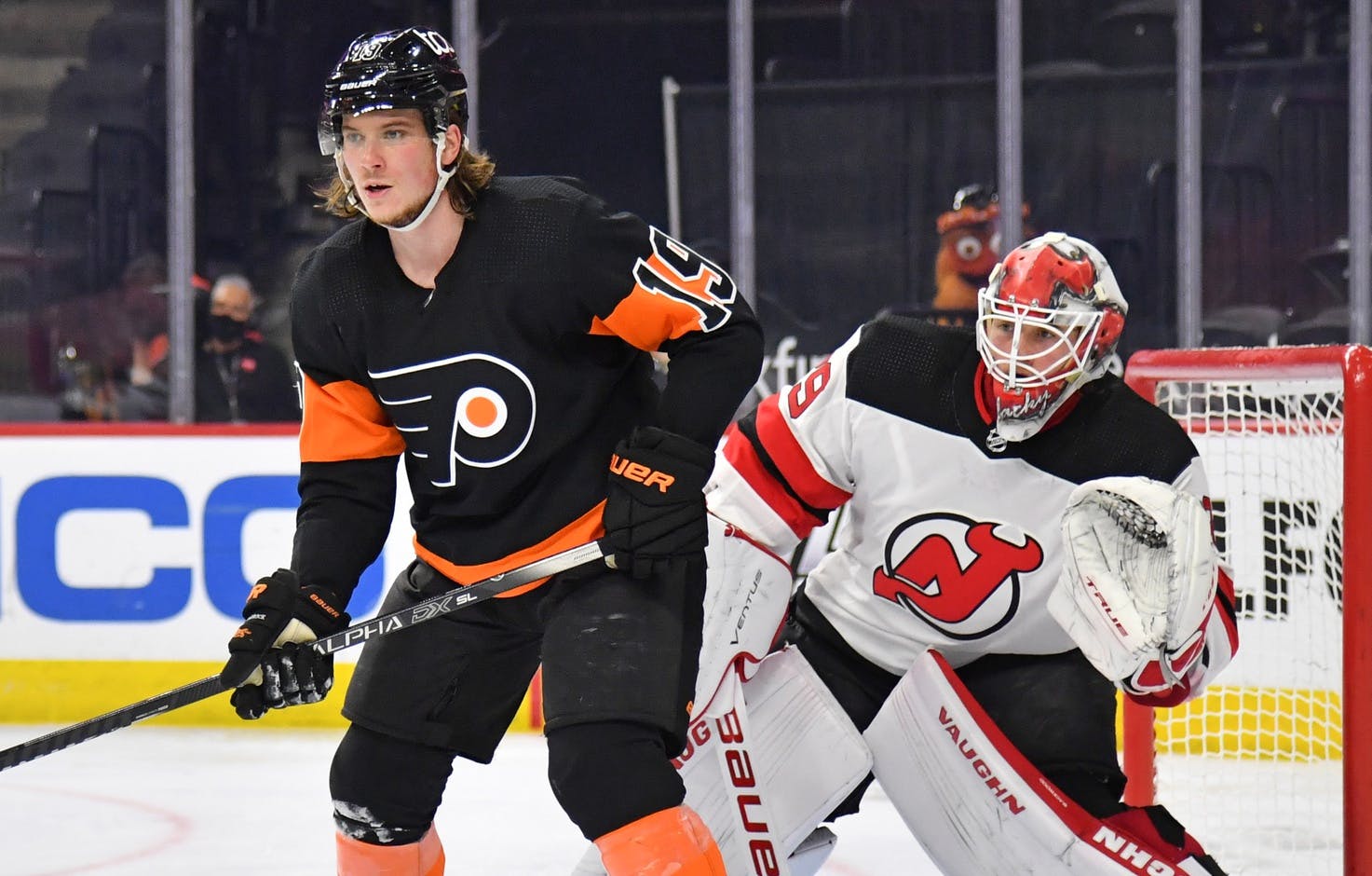 By Mike Gould
1 year ago
Welcome back to FlamesNation’s 2021 Flames Trade Targets series, in which our team of writers takes a look at some of the players around the league either in need of a change of scenery or rumoured to be on the market.
Nolan Patrick reportedly wants out of Philadelphia.
The 22-year-old centre has dealt with injuries and inconsistency in the four seasons since the Flyers made him the second-overall pick in the 2017 NHL Entry Draft.
After two relatively full seasons to kick off his career in Philadelphia, Patrick missed the entirety of the 2019–20 season while dealing with a migraine disorder.
Patrick returned to the Flyers’ lineup in 2020–21, dressing in 52 games and scoring nine points (four goals, five assists). He averaged just 10:45 per game at 5-on-5, a figure which steadily decreased as the season progressed.
On the May 13 edition of “Insider Trading,” former TSN reporter and Flyers beat writer Frank Seravalli reported Patrick’s potential desire to find a new home.

It’s certainly possible. He’s actually gotten a fresh start off the ice. Nolan Patrick has hired his third agent in three years, now with Rich Evans of Point West Sports and Entertainment, and they’re going through the feeling-out process to digest this season and everything that happened in his return to the ice: a little bit disappointing in terms of production. And I think you could certainly see Nolan Patrick on the list of players this summer who ask for a fresh start elsewhere. However, they’re not there yet and, to be fair, the Philadelphia Flyers, on their end, think that Nolan Patrick is still a player that’s just scratching the surface. They’d like to see him get a full summer of training under his belt and come to camp healthy for the first time in a while. We’ll see how that unfolds, but Patrick is a name to watch this off-season as a restricted free agent.

Flyers writer Anthony SanFilippo, of Crossing Broad, added to the smoke on the May 28 edition of his “Snow the Goalie” podcast. Matt Mullin reported on SanFilippo’s comments in a piece for Philly Voice:

The 2020–21 campaign was Patrick’s first playing for new Flyers coach Alain Vigneault. Dave Hakstol and Scott Gordon previously oversaw Patrick’s development during his first two years in Philadelphia.
Patrick is a 6’2″, 198-pound forward who has lined up both at centre and wing for the Flyers. He shoots right and has won 51.3% of the 1,952 faceoffs he’s taken in his three NHL seasons, topping out at 52.6% effectiveness in 2020–21.
A dominant force in the Western Hockey League from a young age, Patrick scored 30 goals in 55 games for the Brandon Wheat Kings as a 15-year-old rookie in 2014–15 before exploding with 102 points (41 goals, 61 assists) in 72 games the following year.
He added 30 points (13 goals, 17 assists) in 21 games during the 2016 WHL playoffs, helping the Wheat Kings win the league championship and clinch their spot in the Memorial Cup.
Patrick missed 12 games with an upper-body injury as a WHL rookie but his injury issues became significantly more pronounced in the 2016–17 season. He suited up for just 33 of the Wheat Kings’ 72 games and missed out on representing Team Canada at the 2017 IIHF U-20 World Junior Championship.
Despite being injured for over half the 2016–17 season, Patrick still entered the 2017 NHL Entry Draft as NHL Central Scouting’s top-ranked North American skater. Nico Hischier ultimately went to the New Jersey Devils with the first pick; Patrick went next, to Philadelphia, at number two.
Patrick played 73 games in his first season with Philadelphia but still could not escape the injury bug, being sidelined three separate times by mid-November. Nevertheless, he scored 30 points (13 goals, 17 assists) in his debut go-round with the Flyers.
Following a sophomore season that resembled his rookie year in many ways (13 goals, 18 assists in 72 games), Patrick entered the 2019–20 season listed as week-to-week with an “upper-body injury” that was later revealed to be a migraine disorder.
The Flyers placed Patrick on long-term injured reserve on Nov. 23, 2019; he continued to put forth a positive outlook about potentially returning in 2019–20 and eventually returned to the ice with the team in February. Nevertheless, Patrick was not included on the Flyers’ return-to-play roster in advance of the 2020 Stanley Cup Playoffs.
Patrick only missed four games in the 2020–21 season, mostly as a result of being a healthy scratch. Although Patrick’s migraine issues currently appear to be a thing of the past, they should not be forgotten by any team thinking of acquiring him.
In particular, Calgary’s climate has shown to be particularly hostile to those suffering from chronic migraines. Dr. Thilinie Rajapakse told Global News in January 2020 that Chinooks, common weather phenomena in southern Alberta involving the arrival of warm Pacific Ocean air and dramatic temperature increases, can trigger severe discomfort.

Rajapakse said she trained in Calgary with Dr. WJ Becker, who published a study in 2000 that concluded “both pre-Chinook and high-wind Chinook days increase the probability of migraine onset in a subset of migraineurs.”
“People are more likely to have migraines before or on Chinook days,” Rajapakse said. “I know having worked there [in Calgary] it was a clear phenomenon that we witnessed.”
[Dr. Michael Knash] said he believes weather can be a factor, but what the precise trigger is, and how often that specific trigger can happen, depends on the specific weather where people live.
“If you talk to headache doctors and migraine sufferers in Alberta, we seem to have more of a bias towards the barometric pressure and things like the wind and Chinooks,” he said.

If the Flames come to an informed conclusion about Patrick’s compatibility with Calgary’s climate and deem him a player worth targeting, they would potentially be acquiring a player with massive upside but who has shown varying degrees of effectiveness at the NHL level.
A selection of Nolan Patrick’s play-driving figures with the Philadelphia Flyers (data from Natural Stat Trick, all 5v5)
Note: In the second-last column, a positive number indicates the Flyers had better offensive results with Patrick on the ice than without him. In the last column on the right, a negative number indicates the Flyers allowed fewer chances with Patrick on the ice than without him.
A selection of Nolan Patrick’s offensive statistics with the Philadelphia Flyers (data from Hockey-Reference and NST)
Awful goaltending tanked Patrick’s on-ice results in the 2020–21 season. The Flyers controlled 50.4% of the expected goals at 5-on-5 with Patrick on the ice last season but got outscored 38-12 in those minutes.
Patrick was slightly above-average defensively for Philadelphia in 2020–21. Evolving-Hockey judged his even-strength defensive play last season as being worth 0.7 expected goals above replacement, the ninth-best mark on the Flyers.
The Flyers regressed in the offensive zone during Patrick’s shifts. They typically averaged 2.11 expected goals for/60 at 5-on-5; that figure went down to 2.01 with Patrick on the ice. Philadelphia averaged 24.32 scoring chances for/60 and 9.08 high danger chances for/60 in 2020–21; with Patrick, those rates decreased to 23.70 and 8.90, respectively.
Still, Patrick’s 5.15 on-ice shooting percentage at 5-on-5 ranked as the second-worst on the Flyers (behind only Connor Bunnaman’s 4.62). Bunnaman’s fortunes were bettered somewhat by the Flyers’ .894 save percentage during his shifts; with Patrick on the ice at 5-on-5, the Flyers’ goaltenders recorded a flat-out abysmal .856 save percentage.
For reference, here is a list of players (min. 100 minutes played at 5-on-5) who dealt with worse goaltending from their own team in 2020–21 than Patrick did:
Patrick played more minutes than all three of those players, combined, and yet still consistently dealt with awful goaltending at his end of the ice in a huge sample of minutes. To add to that, opposing goaltenders registered a stellar .949 save percentage during Patrick’s shifts at 5-on-5. He’s bound to start getting some more bounces to go his way.
At 22 years of age, Patrick would be the youngest forward on the Flames’ roster and the second-youngest player (he’s just two weeks older than Juuso Valimaki). He’s missed a significant chunk of his developmental time but still has plenty of runway ahead of him.
Patrick is a big, talented centre in need of a change of scenery. With a few steps in the right direction, maybe there’s a chance he lives up to his past billing as a top pick.