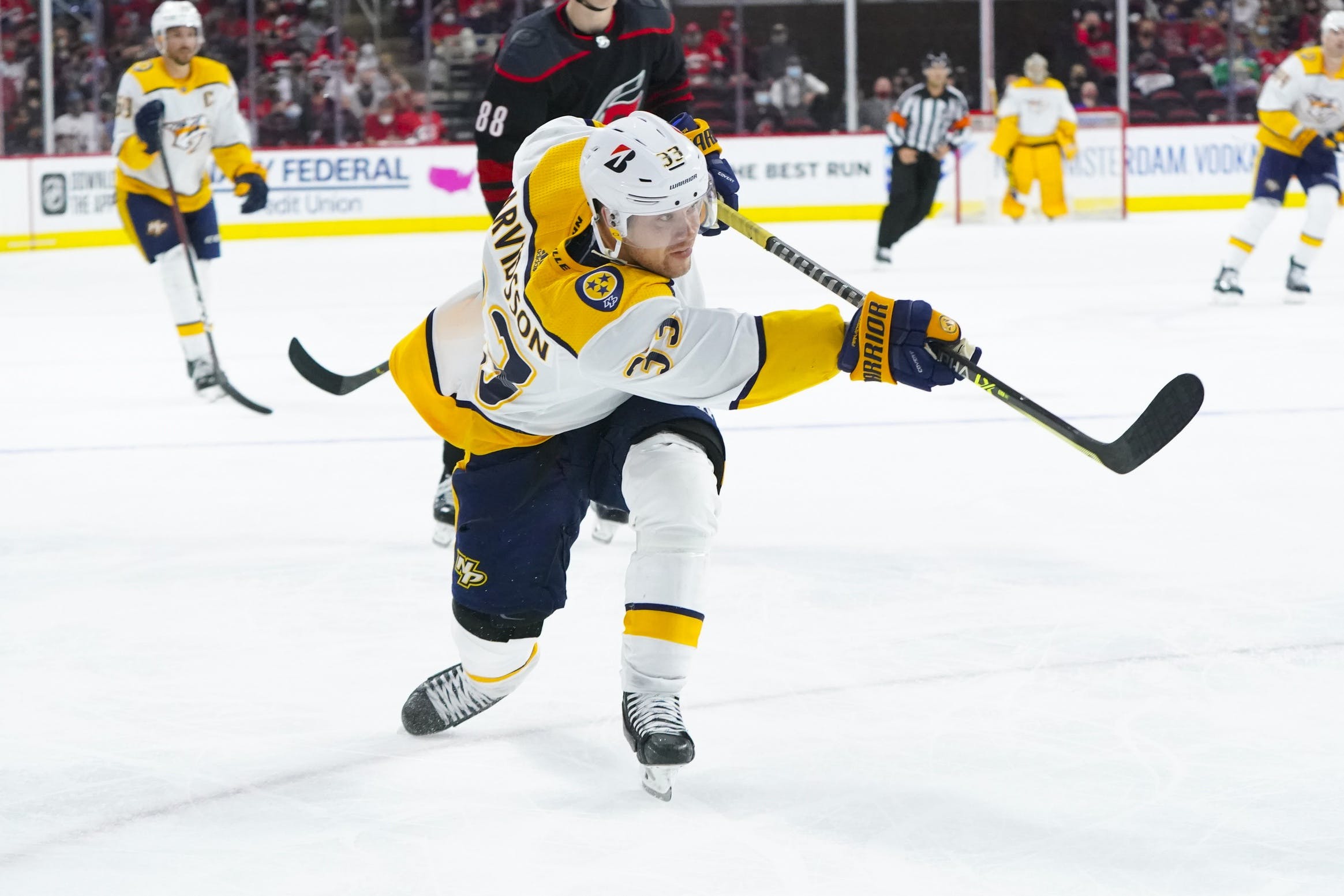 By Mike Gould
1 year ago
Welcome back to FlamesNation’s 2021 Flames Trade Targets series, in which our team of writers takes a look at some of the players around the league either in need of a change of scenery or rumoured to be on the market.
Viktor Arvidsson has scored a lot of goals in his career.
The 28-year-old right-handed winger scored 94 goals in just 216 games with the Nashville Predators between 2016 and 2019, topping out at an impressive 34 tallies in only 58 contests during the 2018–19 season.
Now, two years later, Arvidsson’s fortunes have taken a slight turn for the worse. In 2019–20, he scored 15 goals and 28 points in 57 games; the following year, he registered 10 and 25 in 50.
This past March, David Pagnotta of The Fourth Period reported the Predators are “[willing] to listen” to offers for Arvidsson. In February, Sportsnet’s Elliotte Friedman indicated the Predators’ list of “untouchables” is relatively small.
Arvidsson has dealt with injuries in both of the past two seasons. He missed the final five games of the 2020–21 regular season before sitting out of the majority of Nashville’s playoff series against the Carolina Hurricanes.
According to CBS Sports, Arvidsson likely would have also missed the second round of the post-season (had the Predators advanced). He’s played in just 165 of Nashville’s 207 regular-season games over the past three seasons.
There’s reason to believe Arvidsson may be slowly rounding back into form, however. During his 34-goal 2018–19 campaign, Arvidsson took 195 shots in just 58 games (good for an average of 3.36 per contest); in 2019–20, he took 127 shots in 57 games (only 2.23 per game).
In 2020–21, Arvidsson scored just 10 goals but rebounded up to 151 shots in 50 games. His 3.02 shots-per-game average last year was the fourth-best of his career and closely resembled his output during his peak years.
A selection of Viktor Arvidsson’s offensive statistics with the Nashville Predators (data from Hockey-Reference)
The most impressive part? Arvidsson has seen his average ice-time decrease substantially in the last two seasons, falling from 19:09 per night in 2018–19 to approximately 16 minutes in 2019–20 and 2020–21, but still managed to take more than three shots per game last season.
Arvidsson is a high-volume shooter who can slot in at both wings. During his career, he’s averaged an 11.4% shooting percentage; had he converted at that rate in 2020–21, he would have scored 17 goals in 50 games (a 28-goal pace over a full season).
More of Viktor Arvidsson’s offensive statistics with the Nashville Predators (data from Natural Stat Trick, all 5v5)
Note: In the second-last column, a positive number indicates the Predators had better offensive results with Arvidsson on the ice than without him. In the last column on the right, a negative number indicates the Predators allowed fewer chances with Arvidsson on the ice than without him.
Arvidsson has been a negative-impact defensive player for most of his career but is coming off a season where he provided tangible value in his own zone, relative to his teammates. He also saw his offensive play-driving rebound to a reasonably high level, even if goals became slightly harder for him to find.
Part of what makes Arvidsson such an attractive target is his contract. He has three years remaining on his deal at an average annual value of $4.25 million and has no trade or movement protection. His deal features no signing bonuses and pays him exactly $4.25 million, with no variance in salary, in all seven years.
If Calgary and Nashville were to agree to a deal, Arvidsson would have no say in the matter. He also would not require protection in the Seattle expansion draft, although it’s hard to imagine a scenario where he would be left exposed.
Evolving-Hockey valued Arvidsson’s play during the 2020–21 season as being worth $4.9 million, bolstered largely by his defensive surge and underlying offensive rebound. If Arvidsson’s play-driving starts translating to tangible goals and assists again next season, his deal could start to look like a terrific bargain.
The Flames could certainly use a tenacious right-handed forward with a lethal shot. Arvidsson ticks all those boxes and, with his defensive results improving, he might even be able to check off some more.