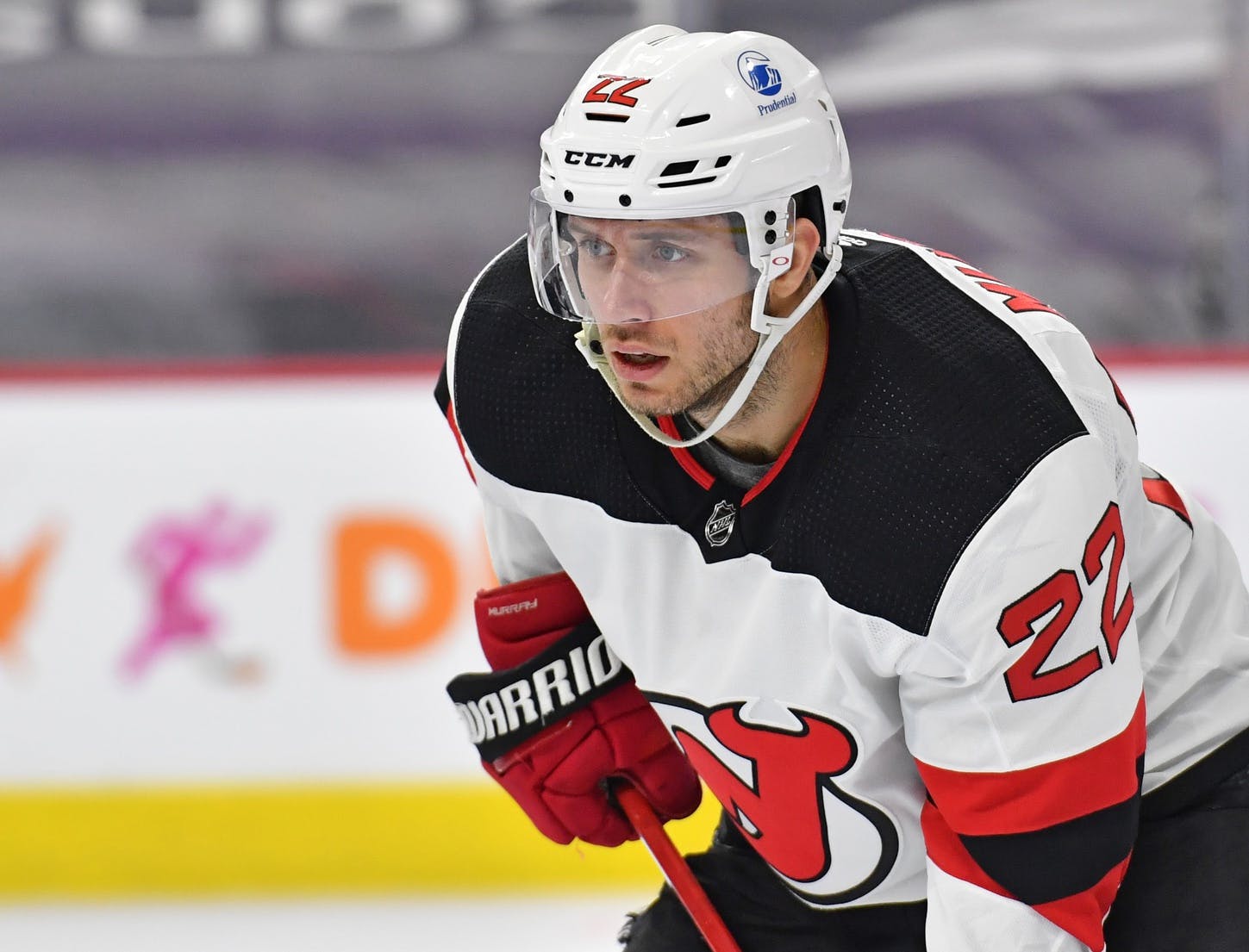 By Mike Gould
1 year ago
Welcome back to FlamesNation’s 2021 Flames UFA Targets series, in which our team of writers assesses some of the top players still remaining on the market.
Even after trading for Nikita Zadorov, the Calgary Flames could still use some additional defensive help. Mark Giordano will not be easily replaced.
Ryan Murray is no Giordano. That said, he’s a capable two-way defenceman who showed legitimate top-four upside at times during his long tenure with the Columbus Blue Jackets. He remains on the market relatively late into the UFA period following an uneven season in New Jersey.

Ryan Murray
Born Sep. 27, 1993 (27 years old)
Left-handed defenceman
6’1″, 206 pounds
Previous contract: two years, $4.6 million AAV
Remember when the Edmonton Oilers selected Nail Yakupov first overall in the 2012 NHL Entry Draft? Ryan Murray went to Columbus with the very next pick.
While Yakupov finished top-five in Calder Trophy voting the season after being drafted, Murray remained in the Western Hockey League with the Everett Silvertips for the 2012–13 season. He quickly surpassed Yakupov, however, as the flashy Russian winger never again matched the impressive goal-scoring output from his rookie season.
Conversely, Murray soon became a top-four defenseman in Columbus and was counted on to play big roles on both special teams from a young age. He ranked fifth among Blue Jackets rearguards — two seconds behind a young David Savard — by averaging 15:14 of even-strength ice-time as a 19-year-old rookie in 2013–14; the same year, he averaged 2:03 on the power play and 1:44 of penalty-killing time. According to Evolving-Hockey, Murray provided positive expected value in both odd-man situations.
Injuries soon became a recurring theme of Murray’s NHL career. After playing 66 games as a rookie, Murray dealt with three major injuries in 2014–15 and appeared in just 12 contests. 2015–16 saw Murray play 82 games for the first (and, to this point, only) time of his career; since then, he’s compiled seasons of 60, 44, 56, 27, and 48 appearances.
Murray played some of his best hockey during Columbus’ surprising 2018–19 season. He scored a career-high 29 points (one goal, 28 assists) in just 56 contests, averaging a total of 21:26 per game and serving as the Blue Jackets’ most-used penalty-killer.
Evolving-Hockey assessed Murray’s play in 2018–19 as being worth $8.9 million. While he missed both of Columbus’ playoff rounds in 2019, he appeared in nine of the team’s 10 post-season games the following season.
With Murray entering the final year of his contract, Columbus traded him to the New Jersey Devils in October 2020 and received a 2021 fifth-round pick in return. In 48 games with the Devils, Murray scored 14 points (all assists) and featured relatively sparingly at 5-on-5.
New Jersey elected not to retain Murray as a pending UFA. On July 28, he hit the open market for the first time in his career.

Generally speaking, Murray finds most of his success in the defensive zone. He’s been a positive defender, in terms of relative expected goals against rates, in five of his eight NHL campaigns and has averaged at least 100 seconds of PK time per game in every season of his career.
Evolving-Hockey has found Murray to be an overall positive influence in the defensive zone in six of the last eight seasons. He’s provided offensive value in just three seasons and has only once surpassed 1.0 total offensive expected goals above replacement.
A selection of Ryan Murray’s play-driving figures in the NHL (data from Natural Stat Trick, all 5v5)
Note: In the second-last column, a positive number indicates Murray’s team had better offensive results with him on the ice than without him. In the last column on the right, a negative number indicates Murray’s team allowed fewer chances with him on the ice than without him.
While the Devils actually outscored their opposition by a 35-29 margin with Murray on the ice at 5-on-5 in 2020–21, they struggled to prevent high-quality chances. Primarily buoying Murray’s on-ice figures: .928 goaltending with him on the ice, a far superior figure compared to the Devils’ usual .911 5-on-5 save percentage.
New Jersey also scored on 9.51% of its shots during Murray’s 5-on-5 shifts, up significantly from the Devils’ typical 7.77% conversion rate.
The Devils averaged 2.69 goals per 60 minutes during Murray’s shifts at even strength; however, they did so while only managing 2.03 expected goals per 60. In Murray’s final year in Columbus, the Blue Jackets averaged 2.14 expected goals per 60 with him on the ice at 5-on-5 but only scored 1.8 per 60 minutes.
Murray’s on-ice impacts have varied substantially from season to season. He averages out as a reasonably effective (if unremarkable) two-way defenceman.
The Flames desperately need someone capable of providing competent defence, preferably while playing on the left side. Murray is solid at worst and a No. 3-calibre defender at best. He’s capable of providing value on a penalty-killing unit and can help out a power play in a pinch.
Evolving-Hockey assesses Murray’s upcoming UFA deal as most likely carrying a $4.263 million cap hit for four years. Seeing how he remains on the market four days into free agency, it seems unreasonable to expect a deal of that length for Murray. The same site projects cap hits of $1.828 million for Murray on a one-year deal and $3.138 million for two years.