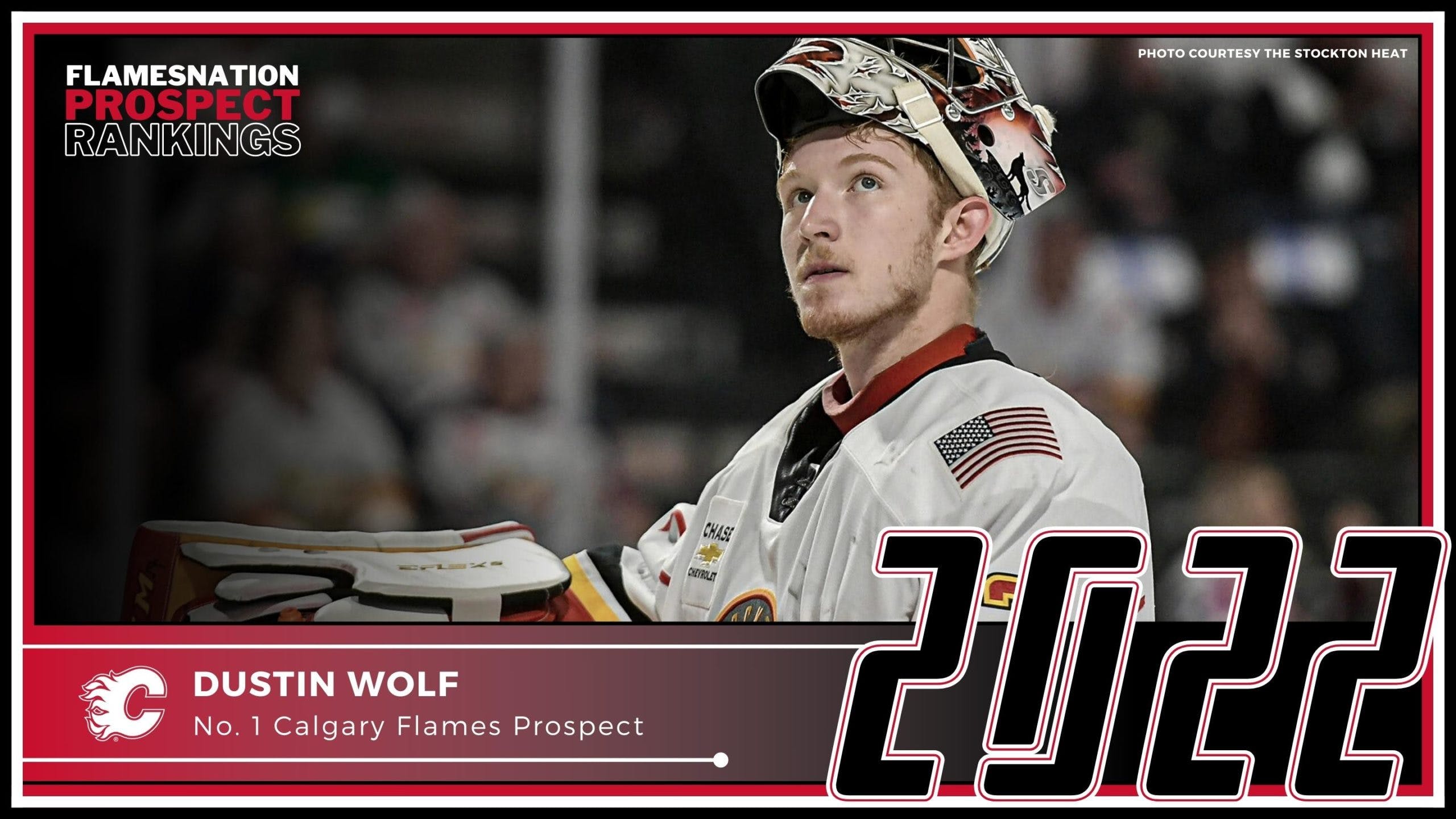 By Mike Gould
2 months ago
We have finally arrived at the top spot on our list.
Dustin Wolf is hardly your typical goaltending prospect. He’s pretty small, yes, but he’s also achieved the impressive feat of being the top netminder in his league in each of the last three seasons — and he only just turned 21 in April.
Five of our six panelists agreed: Wolf is the Flames’ top prospect. Here’s why.
Dustin Wolf
Goaltender
Born Apr. 16, 2001 (Age 21) in Gilroy, California
6’0”, 170 pounds
Selected in the seventh round (No. 214 overall) by CGY in 2019
The best word to describe Wolf’s first year of professional hockey is “commanding.”
The 2021–22 Stockton Heat were an entirely different team when Wolf was between the pipes. He was the driving force behind the team winning two playoff rounds, recording a .929 save percentage and three shutouts in his first 13 AHL post-season games.
During the regular season, Wolf posted a 33–9–4 record and a .924 save percentage in 47 appearances with the Heat. Stockton’s other three goaltenders — Adam Werner, Andrew Shortridge, and Daniil Chechelev — collectively went 12–7–3 with an .882.
Wolf wasn’t the product of a rigid defensive system. He willed the team to succeed.
Playing against the eventual Calder Cup champion Chicago Wolves in the AHL Western Conference Final, the Heat fell behind three games to zero. They proceeded to win back-to-back overtime games while facing elimination before losing a nail-biter of a sixth game to end the series.
Wolf’s statistics in those three elimination games? Seven total goals against on 110 shots faced, good for a .936 save percentage.
You’d be hard-pressed to find a more decorated goaltending prospect than Wolf. He’s a two-time WHL goaltender of the year, a one-time CHL goaltender of the year, and the reigning AHL top goaltender and first all-star team member. He was also named the 2019 CHL scholastic player of the year after maintaining a perfect 100 percent average in Grade 12.
Wolf applies that innate drive toward perfection to everything he does on the ice. He’s one of the most athletic goaltending prospects in the world, with absurd lateral movement and a quick glove. It’s mesmerizing to watch Wolf make a flurry of saves in the crease while constantly tracking the puck and doing everything he can to keep it out.
It’s now up to Wolf to replicate his outstanding 2021–22 performance (or even improve upon it), a sentiment Calgary Wranglers head coach Mitch Love echoed in conversation with FlamesNation‘s Ryan Pike:

Dustin played an outstanding first year as a pro. He was a big reason for our team’s success. The amount of consistency he was able to play with at that level was a real good sign for him and his growth as a young pro, and ultimately our team in terms of having success and bowing out in the conference final. So, something for him to build off of heading into his second year pro. Obviously now there’s a little bit of expectation to try to follow that up, but I think at the end of the day for him it’s about just his routines, his ability mentally to battle through things, and just give us an opportunity to win hockey games. That’s what we expect from whoever our goaltenders are in net that night.

Wolf is almost always worth the price of admission all by himself. He’s a joy to watch in the crease on a nightly basis, and he should give Wranglers fans plenty of reasons to cheer in 2022–23.
Given how much success he’s already had since being drafted, it’s easy to forget Wolf is so young. But the Flames have the luxury of letting him develop further in the AHL while Jacob Markstrom and Dan Vladar get reps at the top level, and Oscar Dansk should be a better partner for Wolf this coming season.
We could see Wolf make his first NHL start at some point this year, but he’ll likely spend most of the year with the Wranglers. Either way, Calgary fans will be able to see a lot of him. He’s an outstanding goaltender with the potential to be a superstar in the National Hockey League.
And he’s the Calgary Flames’ top prospect.