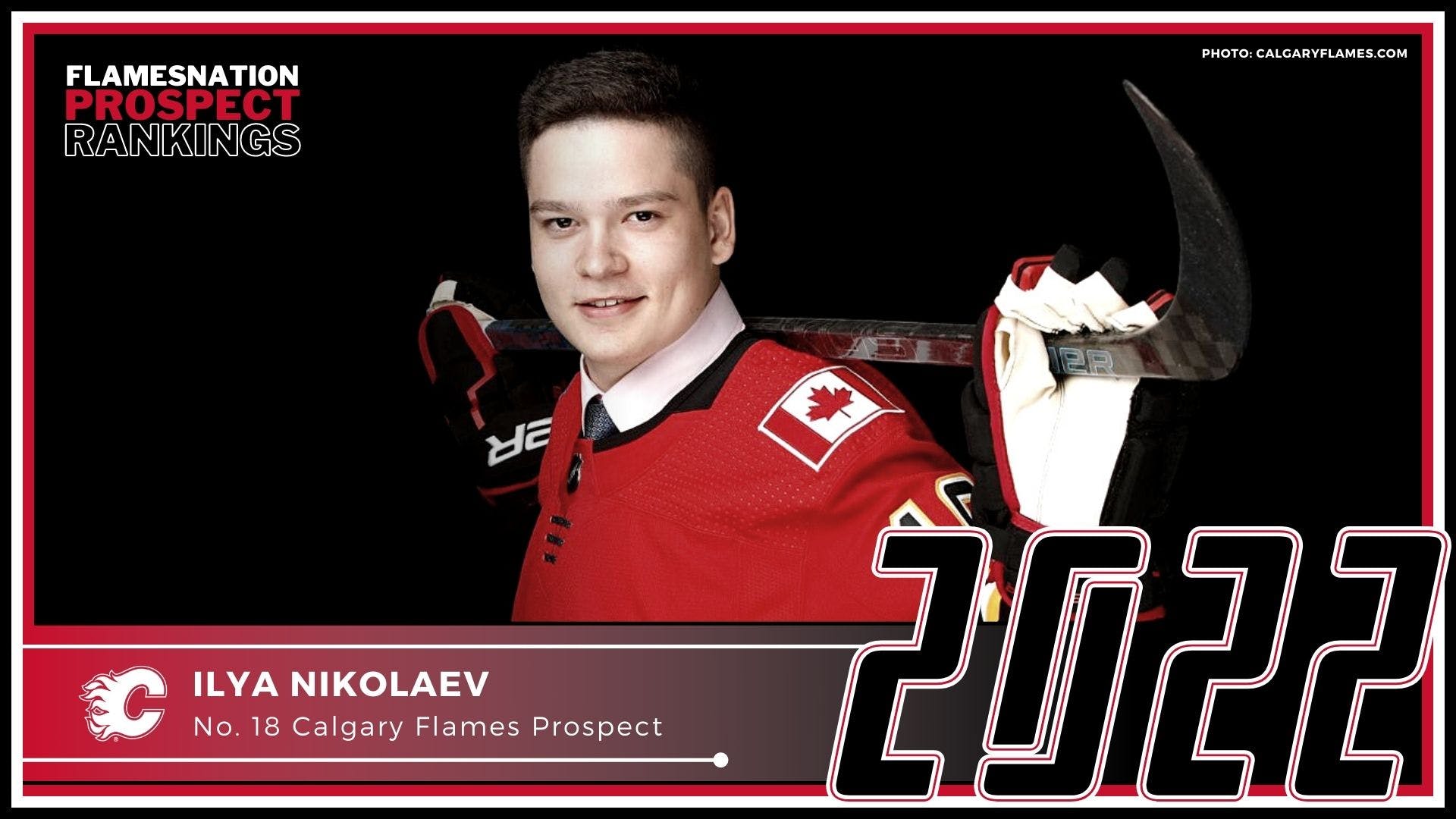 By Angus Hout
5 months ago
On May 21, the Calgary Flames inked a three-year deal with the 88th overall pick in the 2019 Draft, Ilya Nikolaev. That day he would become the third player from the 2019 class to sign with the Flames after @Jakob Pelletier and @Dustin Wolf.
There wasn’t much noise about Nikolaev at the time, as the Flames were in the middle of the Battle of Alberta playoff series against the Edmonton Oilers. Who is this mysterious man from Yaroslavl, Russia, who has been ranked 18th on our annual ranking, and what do you need to know about him?
Ilya Nikolaev
Left-shooting centre
Born Jun. 26, 2001 (Age 21) in Yaroslavl, Russia
6’0″, 190 pounds
Drafted 88th overall by CGY in the 2019 NHL Draft
The one thing I’ve heard over and over again is Nikolaev has a crazy high hockey IQ and has been referred to as a Michael Frolik type. Due to that high hockey IQ, the young Nikolaev was a staple on Russia’s junior teams.
Nikolaev has a ton of promise as a two-way centre so a perfect middle-six kind of guy who dominated in the USHL with the Tri-City Storm. He would spend the 2019-20 and 2020-21 seasons jumping up and down throughout Lokomotiv’s system. He was good enough for the MHL (U20), and the Russian U18 league (the NMHL), and their secondary pro league (the VHL) but couldn’t crack the KHL.
When Nikolaev was eligible to be drafted in 2019 he was touted to go anywhere between 9th overall and 61st overall. He would ultimately drop to 88th due to a weaker showing during the 2019 World Junior Championship where he would only pocket two goals and two assists- four points in seven games.
During his time in the USHL and playing for the Tri-City Storm in 2021-22 where he would play 58 games and put up 23 goals, and 49 assists for 72 points the centre would be fourth in scoring for the Storm. By the end of the season, he was the top centre for the Storm.
In the playoffs, for the Storm Nikolaev would play five games and was producing at a goal a game with five goals and three assists for eight points which were good enough to lead the Storm in goal scoring during their playoff run. During the Conference Semifinals week of the USHL playoffs, Nikolaev would be the forward of the week.
After the Storm were eliminated, Nikolaev joined the Stockton Heat. Nikolaev would get into one playoff game with Stockton, nothing too crazy happened in that game for him but he would add two shots to the shot clock.
Here is what Paul Zuk at Smaht Scouting had to say about Nikolaev:

Ilya Nikolaev has sort of struggled to find his footing, so to speak, since being selected 88th overall by the Flames in the 2019 NHL Entry Draft. However, the transition from European hockey to North American ice this past season did him wonders. Nikolaev found a home with the USHL’s Tri-City Storm, alongside countryman and fellow Flames prospect, goaltender Arsenii Sergeyev. It didn’t seem to take Nikolaev long to adapt to the North American style of play, as he had his best season both statistically and in terms of overall play since being drafted.
Paired for most of the season on a line with Cole O’Hara, Nikolaev played the role of top-nine centerman strongly this past season and racked up an impressive 23 goals and 49 assists for 72 points in 58 games. His quick and powerful stride paired with his above-average playmaking and passing skills paid dividends for the Storm in 21/22, as Nikolaev helped Tri-City to an Anderson Cup and a Western Conference Final berth, where they were swept by Sioux City in three games.
Nikolaev showed just how effective his game can truly be when he finally gets settled into a stable environment. As his junior hockey eligibility has run out, look for him to play some middle-six minutes for Calgary’s brand new AHL team, the Wranglers. Nikolaev should look to continue to build on his impressive 21/22 season, focusing on being that powerful, secondary scoring option that he played so well this season.

Our Mike Gould has Nikolaev listed as the fifth centre with the Calgary Wranglers, meaning that it looks like the Russian will have to push @Rory Kerins, @Ben Jones or @Connor Zary out of their spots to make the roster, or at least battle with those players to earn significant ice time. (Since he’s on an entry-level deal, Nikolaev would be eligible to be assigned to the ECHL if needed.)
The potential is there for Nikolaev to make the top six for the Wranglers. In 2019, TSN’s Craig Button had Nikolaev ranked 25th overall for the draft. If he can find that stable environment the Flames may have picked up a late-blooming diamond in the rough.