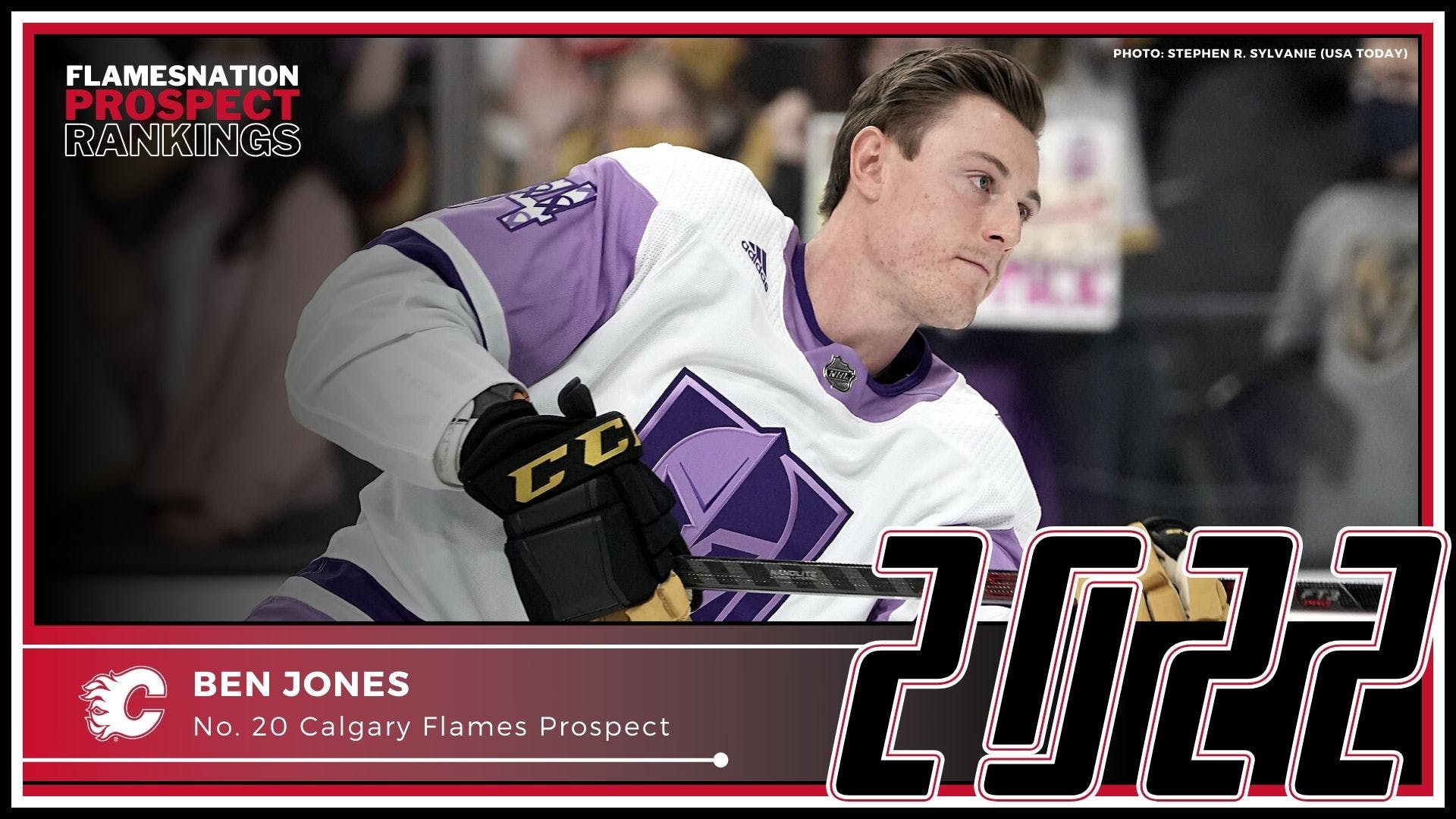 By Mike Gould
3 months ago
Earlier this summer, the Calgary Flames signed 23-year-old centre Ben Jones away from the Vegas Golden Knights.
The move was met with little fanfare, particularly in the wake of Johnny Gaudreau’s departure and with Matthew Tkachuk’s future decidedly uncertain. Not many Flames supporters wanted to hear about Ben Jones in the middle of July.
Well, here we are, one month later, and Jones has made it into our Top 20 Flames prospects list. He’s eligible for the Calder Trophy, so he qualifies to be here. And while his numbers don’t necessarily leap off the page, he’s also not somebody to dismiss.
It’s time to talk a little more about Ben Jones.
Ben Jones
Left-handed centre
Born Feb. 26, 1999 (age 23) in Waterloo, Ontario
6’0″, 187 pounds
Drafted in seventh round (No. 189 overall) by VGK in 2017
So, who the heck is this guy?
The Golden Knights made Jones their very last selection (of 12) in their first-ever draft, and he made the jump to the American Hockey League in 2019–20 after scoring 102 points as a 20-year-old OHL player the previous year.
In Jones’ three AHL seasons in Vegas’ system, he went from being a fourth-liner to a middle-sixer to a top-six forward. Jones finished second on the Henderson Silver Knights in goals (25) and points (41) in 66 games during the 2021–22 campaign and earned a brief NHL call-up along the way.
Now, let’s be frank. Vegas’ prospect pool isn’t particularly strong, and Jones probably wouldn’t have received those two NHL games if he had spent the 2021–22 season playing basically anywhere else. The Golden Knights were also ravaged by injuries to a pretty ridiculous extent last year.
Still … Jones is hardly nothing, even if his closest comparable is a left-handed Glenn Gawdin. He’ll play big minutes on the inaugural AHL Calgary Wranglers this season.
Just for kicks, let’s take an early look at the Wranglers’ projected forward depth chart. (We’ll revisit this later in the summer).
Zary, Jones, and Kerins could all slot in pretty much anywhere between the No. 1 and 3 centre positions. It all depends on which combinations Wranglers head coach Mitch Love ultimately favours, and those could change throughout the season.
Here’s what our pals over at SinBin.Vegas had to say about Jones (who, by the way, is not related to Blair or David):

Ben Jones is a defense-first center who is known most for his backchecking, positioning, and relentlessness. There’s not much to his offensive game beyond a willingness to go to the dirty areas and compete. He’s an excellent leader on the ice as well and coaches love him because of his defensive reliability. He’s a strong penalty killer but is limited a bit in this by his average skating. Simply put, he’s a high-floor, low-ceiling prospect who can probably step into an NHL lineup in a pinch but for the most part he’ll be stalwart in the AHL.

Sound familiar? That’s pretty much exactly what we came to expect from the likes of Gawdin and Luke Philp over the last couple of seasons with the Stockton Heat.
Jones will probably be a fixture on one of the Wranglers’ PK units this season, playing alongside guys like Clark Bishop, Brett Sutter, and Martin Pospisil. He could also see time on the PP, although it’s more likely we see somebody like Rory Kerins elevated into that role.
Ultimately, Jones looks like your classic AHL tweener centre. He’s a little younger than most of the guys we’ve seen flutter through the Flames’ minor-league ranks over the last few years, but there probably isn’t much that separates him from the likes of Alan Quine, Tyler Graovac, and Byron Froese.
Jones will become a restricted free agent after the upcoming season, assuming the Flames tender him a qualifying offer. It’s easy to see him sticking around in the organization for a few years, and there’s a chance he could carve out a role on the Flames’ NHL fourth line down the road.
We’ll see what Jones can do in his new environment. At the very least, he’ll be worth watching with the Wranglers. At best, he could be a decent Trevor Lewis facsimile.