Beyond the Boxscore: Calgary Flames fail to find traction, still struggle to score in Dallas 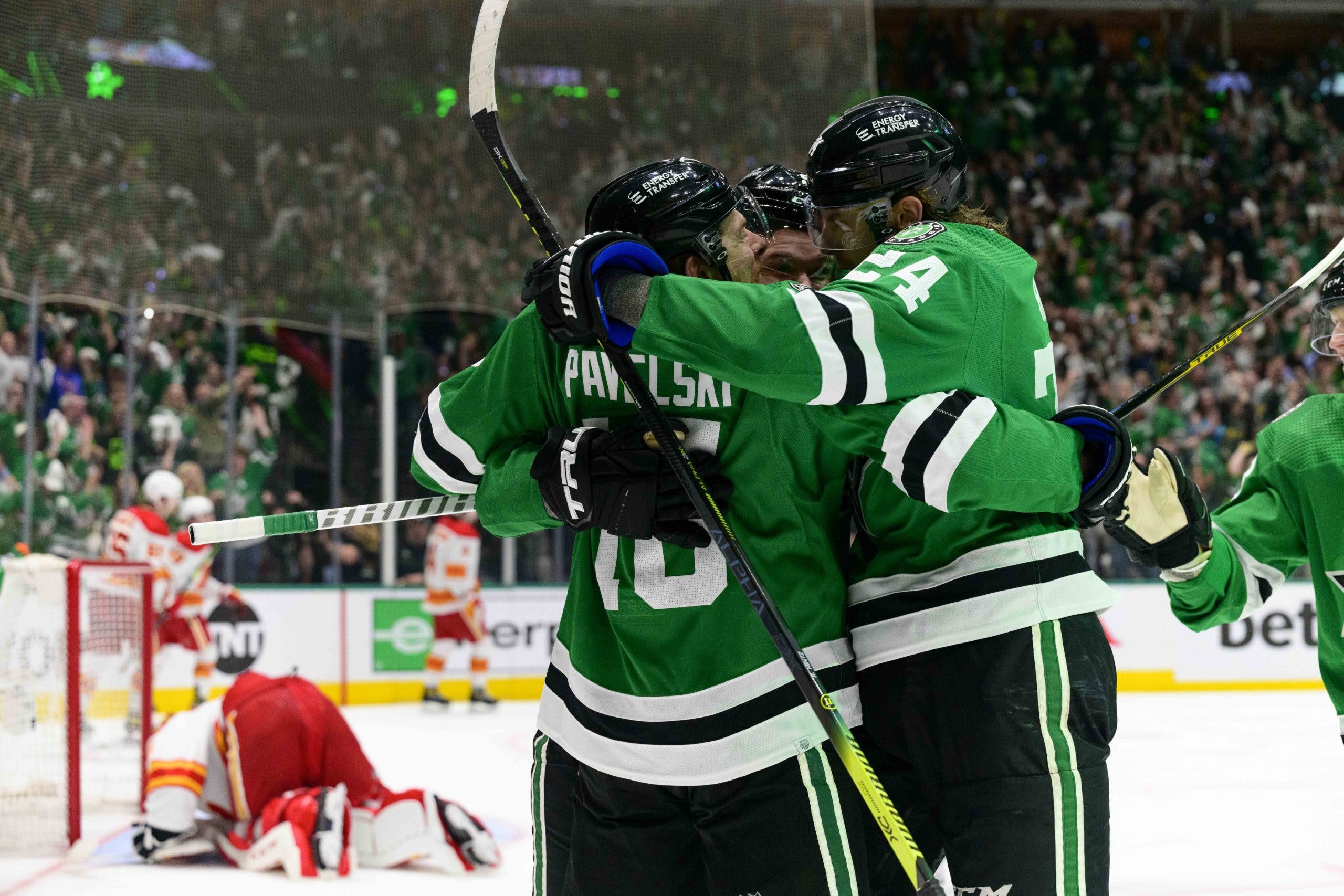 By Shane Stevenson
6 months ago
Now, it’s only Game 3, but the Calgary Flames are flirting with danger. They may say they’re calm, and everything is fine, but they were a couple bounces in Game 1 away from being down 3-0 to Dallas. And they are now a rough Game 4 away from being down 3-1 to Dallas. Be pretty rich for the team to waste 8 or 10 days against a wildcard team that almost faced Colorado – but they’ve been coming close. They aren’t playing near the level they reached during the regular season and will need to find it in short order. No time to wait and figure things out – the time is most certainly now to show up and dominate, otherwise Joe Pavelski and Jake Oettinger are going to send them packing.
CF% – 52.51%, SCF% – 47.39%, HDCF% – 52.36%, xGF% – 52.53%
It’s a Team Game – Another game that saw the Stars match Calgary shot for shot throughout the entire night. It isn’t like the Stars are taking over either – they just have been more opportunistic. Their goaltender has out-dueled Jacob Markstrom almost at every turn, Oettinger had to make some fantastic saves on a late Flames power play. Bottom-line with everything is the Flames need to find a way to beat the Stars goaltender – the middle six scorers they spent all their assets on need to step up as well.
Corsi King – Tyler Toffoli (67.97 CF%), Andrew Mangiapane (65.35%), and Mikael Backlund (64.72%) were tops for the Flames. Mangiapane has had some good chances – he needs to put that 35-goal touch to good use. The Dallas crowd brought some good energy which may have helped fuel the Dallas comeback.
Corsi Clown – Dillon Dubé (28.22%) had himself a very rough night. On the wrong side of chances, attempts, possession, and wasn’t noticeable like he has been previously. Not everyone is going to play lights out every game of the post-season, and it’s certainly not on Dubé to shoulder the complete offensive load for this team. Young guy had a rough game – lets see how he bounces back in Game 4.
Taken By Chance – 4 high danger chances and none against – Trevor Lewis (51.69 SCF% // 100 HDCF%) led the way for the Flames. Erik Gudbranson (57.55% // 87.85%) was on the ice for the most high-danger chances of any Flame. The Flames top line scored so many people may assume they played well, but they saw a significant amount of high danger chances against. Johnny Gaudreau (41.18% // 39.05%) and company have not had a standout game yet. After being hailed as one of the top lines in hockey letting 7 high danger chances against is the opposite of what you would expect.
xGF% – The expected goals share is where you can see the main problem from this game – the top 4 defenceman failed to win their match-ups. They aren’t defending entries the same, waiting long stretches to transition the puck, and are giving up their own blueline more frequently – not reading the play to know when to keep possession alive. Part of that stems from the mismanaged forecheck in game three, but still holds true. Tanev (36.82 xGF%) and Kylington (37.23%) were worse off than Hanifin (42.90%) and Andersson (44.61%).
Game Flow –

As you can see it was another game that saw the Flames end on pretty level terms. They have not been able to grab extended momentum in any way. They really have not solved Dallas at all. Those pre-series predictions showed every expert analyst picked Calgary – the Flames haven’t played like that team everyone picked yet.
Game Score – Erik Gudbranson (2.45 game // 0.55 average) led the way without getting any points – a testament to his strong defensive play in this match. Trevor Lewis (2.20 // 0.28) and his goal led the way for the forward corps. Most Flames players aren’t punching above their season averages – which isn’t a crazy surprise.
Shot Heatmap – 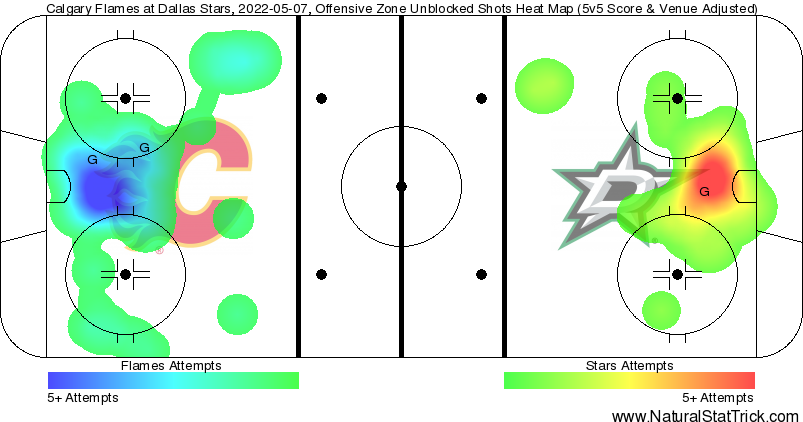 So after two games of no chances from the slot both teams gave it up completely and it still resulted in a low scoring game. The goaltenders in this series are having quite the battle, it could be the decisive in terms of who wins the whole thing.
In The Crease – The busiest night for Markstrom so far – 2.21 expected goals against. Only one high danger chance got by him for a 5v5 save % of 0.952%. The 2-1 deficit in the series is not on Markstrom in any way, he’s been consistent as consistent comes. He’s just waiting for his team to give him some run support.
Today’s Specials – If they keep giving the Stars 4 power plays a game they’re going to get burned. No matter how good the PK unit is the Stars have some superstar power and will find a way to capitalize. The Flames PP finally showed some serious urgency, got some quality chances, but couldn’t score. That’s been the theme so far – all this talent and no goals.
Player Spotlight – Rasmus Andersson – He gets kicked out of Game 1 and then struggles in clutch moments in this game. Andersson has become an essential key for this Flames team to work so he has to be at the top of his game every night. He and Hanifin need to be able to maintain possession more and be able to maximize puck possession. Right now the Stars are finding more holes behind them than they can allow and it needs shored up.
Flashalytic’s 3 Stars –
1) Erik Gudbranson
2) Trevor Lewis
3) Andrew Mangiapane
The Flames play Game 4 on Monday night in Dallas. They trail the Stars 2-1 in the series.
(Stats compiled from Naturalstattrick.com // Game Score from Hockeystatcards.com)