Beyond the Boxscore: Calgary Flames find a way to let 2 points slip away from them… again. By Shane Stevenson
23 days ago
I don’t want to say that was the worst loss of the season solely because it was not a team collapse that caused the blown lead. After it was tied (thank you off-sides), the players weren’t really rattled and just kept playing the way they always play when they have a lead – less aggressively. If you get to three goals and then play hold on you kind of have to pivot again if you don’t – you know – hold on. I’m not convinced this roster is enjoying this type of attack right now, but they all are buying into it the best they can. There were more positives for the skaters than negatives, the Flames certainly earned that point.
CF% – 61.22%, SCF% – 50.51%, HDCF% – 47.93%, xGF% – 56.23%
It’s a Team Game – Lets take another look at the problem and it’s clear as day to see. Heck the coach even talked about it saying (paraphrasing here – don’t take as an exact quote) he didn’t have the players skilled enough to attack from the middle so instead they have to take a lot of outside shots. Absolute hogwash. Even if you don’t think they’re that skilled when you need goals you can’t settle for the low percentage plays the Flames are constantly taking. They have got to find a way to consistently attack the crease with shot attempts if they want to win. Look at where Lucic and Mangiapane’s goals came from tonight? Backlund got his tip parked just outside the blue too. I don’t care what anybody else is telling them – get. to. the. crease.
Corsi King – Adam Ružička (86.22%) did just fine with Walker Duehr (66.47%) coming in. Duehr – in one game – almost played as many minutes at 5v5 as they gave Phillips over two full games. My theory on the Flames is that they operate under the number one goal of winning games today. This season is always the primary goal and trying to win the Stanley Cup is the only thing that should be looked at – period. I can absolutely respect that and admire it, but it comes at a cost of seeing young, skill-based players getting thrown in the lineup to try and develop them. Young players make mistakes – that’s not a knock on them it’s how they learn. If your goal is the Stanley Cup you don’t want young players coming in and making mistakes, especially when you’re only just hanging/just outside of a playoff spot.
It’s a lot easier to sell to the fans when they’re comfortably in a playoff spot – something shown the last few days to be just a difference of 4 points between this season and the last one. When they’re not in it comfortably you’ve got fans worrying about what’s happening 2, 3, 5, 10 years down the line and a coaching staff that’s only focused on the next game. Not hard to see why there’s so much noise surrounding how the Flames are operating, but don’t hold your breath expecting some magical change if you disagree. Players are told they have to steal a spot in order to make it – that’s just not how it actually happens. Without injuries or a severe streak of bad defensive hockey I don’t expect an extended stay from anyone that started this season on the Wranglers.
Corsi Clown – Elias Lindholm (25.95%) and his line of Toffoli (32.23%) and Dubé (27.92%) had a pretty bad outing. Some of the worst metrics they’ve posted as a line and certainly the worst to date this season for Lindholm. It’s not a common thing that reoccurs frequently so I’m not bothered by it one bit and am certainly not worried about it happening again. Chris Tanev (33.02%) and MacKenzie Weegar (40.66%) got hemmed into their own end more than they’d have liked as well.
Under Pressure – 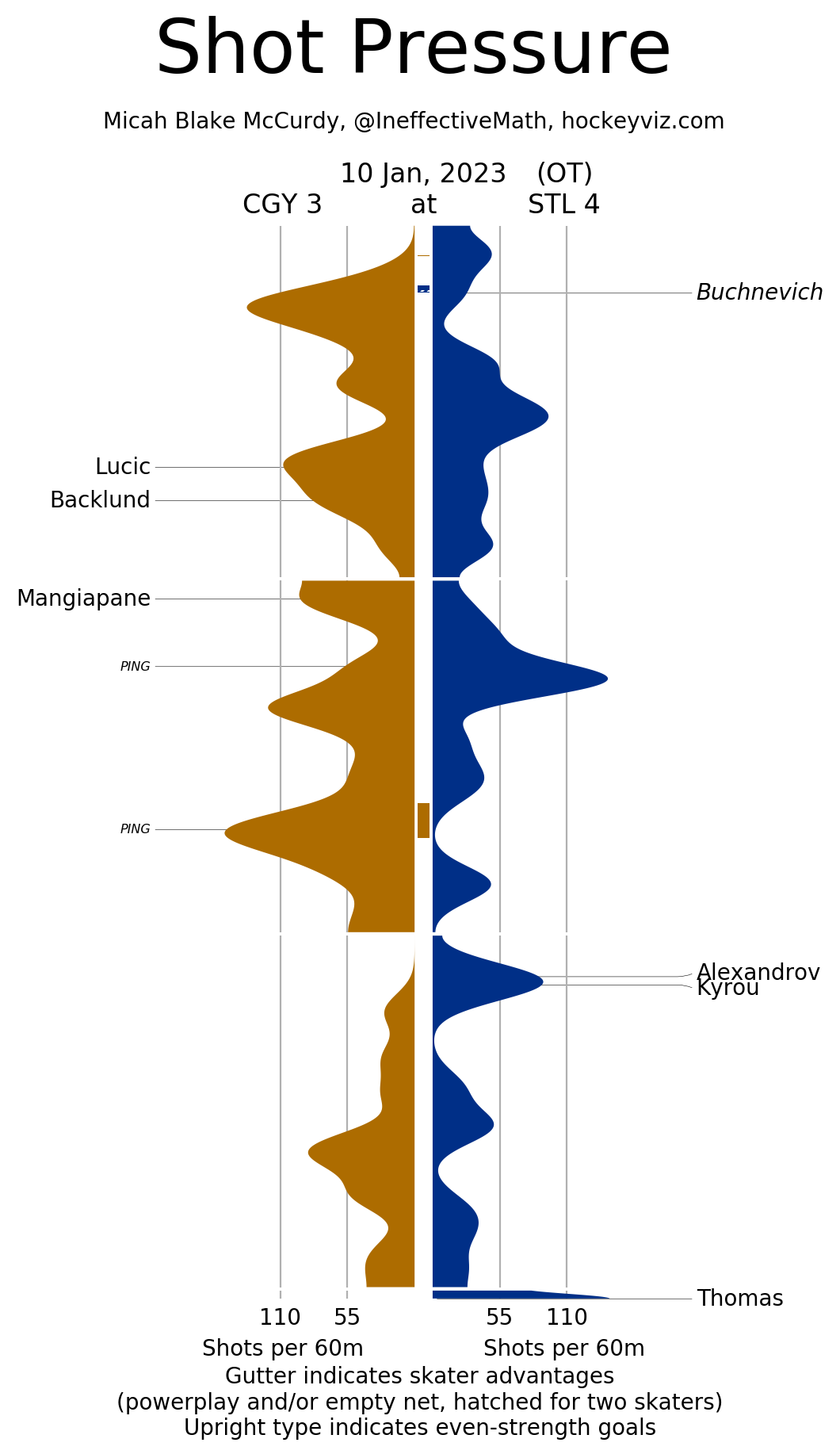 Taken By Chance – The great news is Andrew Mangiapane (78.88 SCF% // 82.10 HDCF%) looked like the 30+ goal man from last season. 9 high danger chances just from him. I was look at with/without statistics at HockeyViz.com the other day and when Mangiapane plays with Backlund (73.67% // 73.40%) they elevate each other to almost perfect hockey levels. Throw in another defensive player that always comes through in Blake Coleman (73.79% // 73.56%) and it’s one of the most reliable trios in hockey. You can send them out after any situation and you’re going to get the same level of top-notch play.
xG Breakdown – 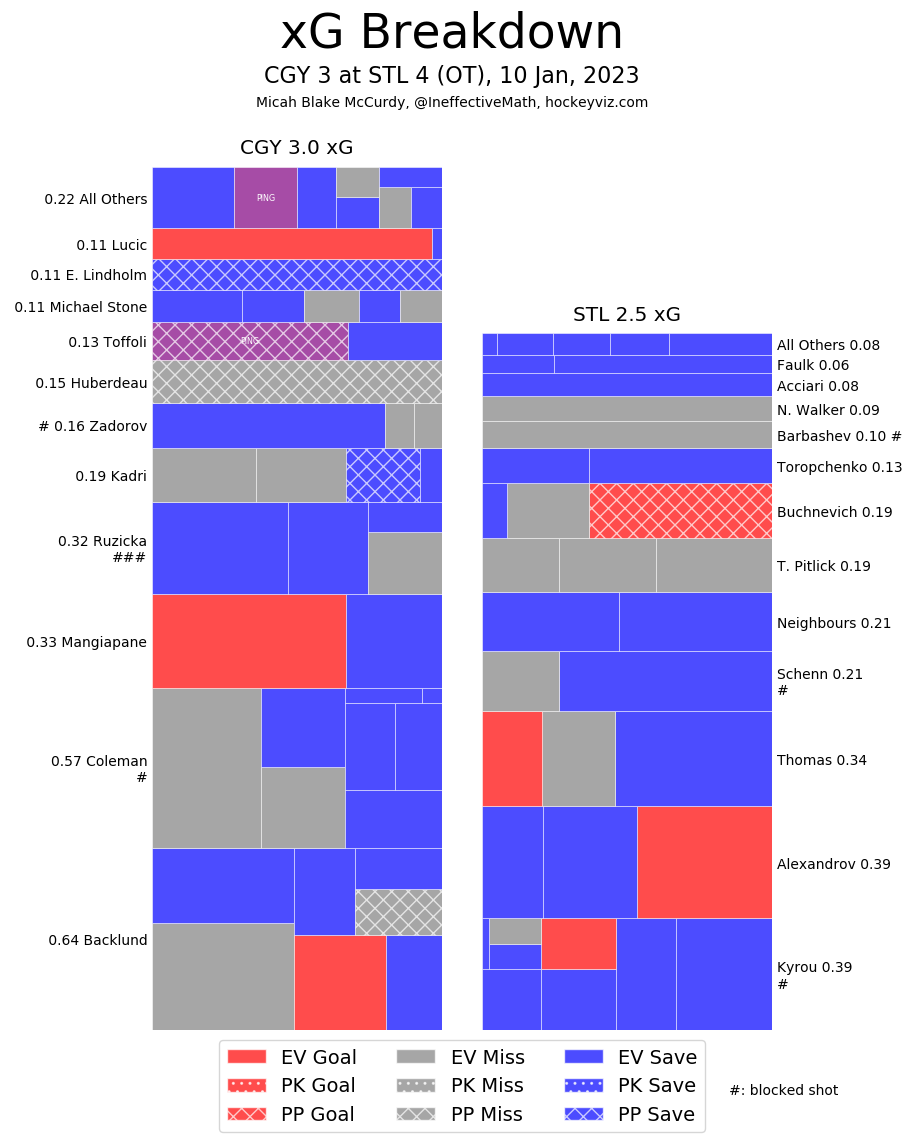 xGF% – I’ve got to mention Elias Lindholm only had an xGF% of 8.76%. That’s not just bad that’s downright horrific. As mentioned earlier I’m not worried about a re-occurrence but folks if he was in the 30% range, I’d still be talking about he got walloped and it was way worse than that. It’s been almost half the review and now it’s time I eat a bit of crow on my old Lucic (48.24%) comments. I said he was double-clutching and fumbling the puck three games ago, then after a good game I said it wouldn’t last. Here we are 3 games after all that and he’s played more than well enough to continue to stay on that line. Until such time the play drops off again, I’m going to suggest leaving that line together. They haven’t been a direct cause to any of this last week’s losses – the opposite actually they are actively contributing tangible results. I’m not saying it’s forever, but I am saying it’s good to try another day.
Game Flow – 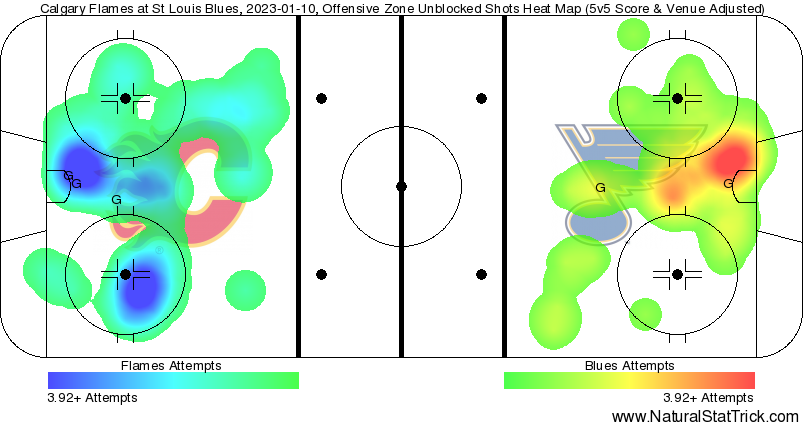 In The Crease – I’d like to think I’m quite good at looking at replays and finding exactly where the defensive breakdowns happen that lead to goals against. I do that to show why the goaltender isn’t usually responsible for the goal happening despite being the one that gets pointed at the most. Hate to do this but this one I could not find Markstrom a scapegoat for those two third period goals against. Maybe a bit of leeway for the defender not tying up the rebound on the second goal, but that bad shot saw the puck bounce right back into the slot instead of a non-lethal area. The turnover for the third happened in the neutral zone and Kyrou ripped that with only Andersson as a partial screen from above the face-off circle. 2.28 expected goals against 5v5 with a high danger and medium danger chance getting behind Markstrom.
Player Spotlight – Jonathan Huberdeau – I was not a fan of the turnover directly into a 2-on-1 in overtime. I do respect trying to make a move to the middle – it’s all I’ve been asking to see for weeks now – but Kadri was burning up the wing and it was not a safe decision at that time. Of course, if it works, we’re all praising him saving us from blowing a 2-goal lead, but alas it went the other way. Love the fight but a bit more situational awareness – that goes for Kadri too. They’ll learn each other’s OT tendencies eventually.
The Goals –
Flashalytic’s 3 Stars –
1) Andrew Mangiapane
2) Nazem Kadri
3) Mikael Backlund
The Flames play the Blues again Thursday night – same time, same place.
(Stats compiled from Naturalstattrick.com // Game Score from Hockeystatcards.com // xG and Under Pressure charts from HockeyViz.com // Game Flow and Shot Heatmap from NaturalStatTrick.com)
Editorials
Recent articles from Shane Stevenson