Beyond The Boxscore: Calgary Flames take overtime victory in Vancouver 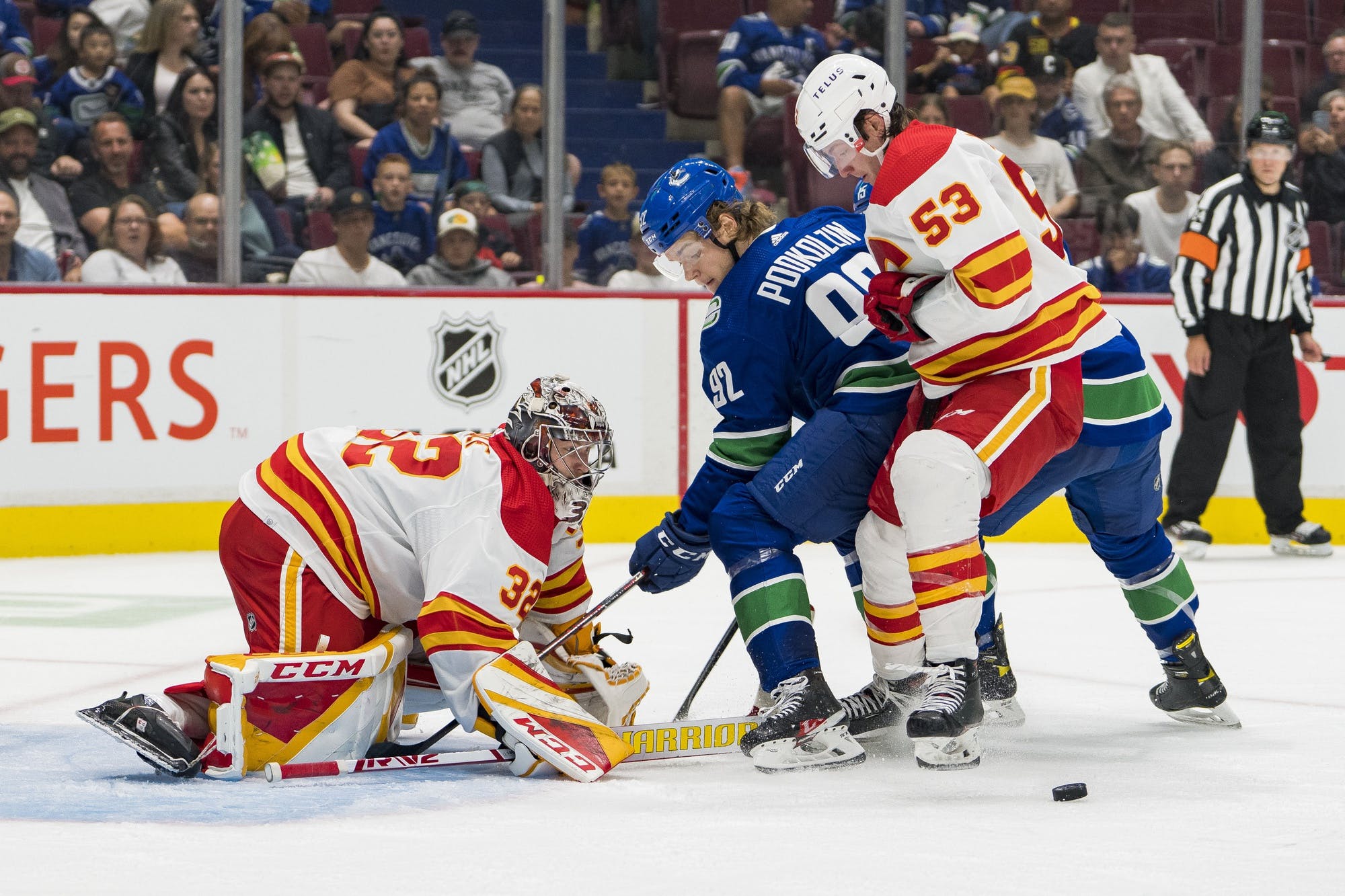 By Shane Stevenson
2 months ago
Welcome back one and all to Beyond the Boxscore: Season 2 –  a place to find out which Flames players had statistically great nights combined with some insight into what was working or not by myself (Shane Stevenson – @Flash_33 on Twitter). We’ll have charts, video breakdowns, colour commentary, and plenty of in-depth analysis.
Two pre-season games means two Beyond the Boxscore breakdowns! Just remember: it’s only the pre-season.
CF% – 56.79%, SCF% – 58.73%, HDCF% – 54.55%, xGF% – 74.31%
(CF = CorsiFenwick, SCF = Scoring Chance For, HDCF = High Danger Chance For, xGF = Expected Goals For)
It’s a Team Game – For clarification – this article is about the game that was played in Vancouver. It was filled with special teams – pretty much the whole game. Of the 63:39 played only 33:26 of it was 5v5. The Canucks may have got the goals late, but on the extended even-strength stretch in the third it was Calgary carrying the play. The roster was a lot of last years Wranglers and a version of the projected fourth line for the NHL club. Some of the more prominent Wranglers from last year really found ways to stand out against a veteran heavy Vancouver lineup.
Corsi King – Two players succeeded in not seeing a shot even attempted against them – Ben Jones (100 CF%) and Juuso Valimaki (100%). Jakob Pelletier (81.90%) led the team in corsi-events for tonight with 8.41 attempts (5v5 SVA), with Matthew Phillips (80.06%) right behind him with 7.46 attempts. Adam Ružička (62.42%) and Nick DeSimone (51.77%) were the other Flames to hold their own in the attempt battle.
Corsi Clown – Emilio Pettersen (23.94 CF%) saw the least amount of 5v5 icetime in this game. Kevin Rooney (26.73%) was down there with him in getting out attempted. On one of the Canucks goals Rooney found himself very out of position which allowed Podkolzin to walk in and deke Dustin Wolf. Cole Schwindt (31.54%), Trevor Lewis (31.54%), Dennis Gilbert (38.77%) rounded out the bottom 5 on this night.
This is where I put the disclaimer about overreacting – there was very little in terms of 5v5 sample size to appropriately judge much of anything. These numbers encompass the end of powerplays and the momentum that can be kept up by virtue of possessing the puck when the penalty runs out. You can’t completely take it with a grain of salt because people are battling for jobs on the team, but expectations should still be somewhat tempered.
Under Pressure – 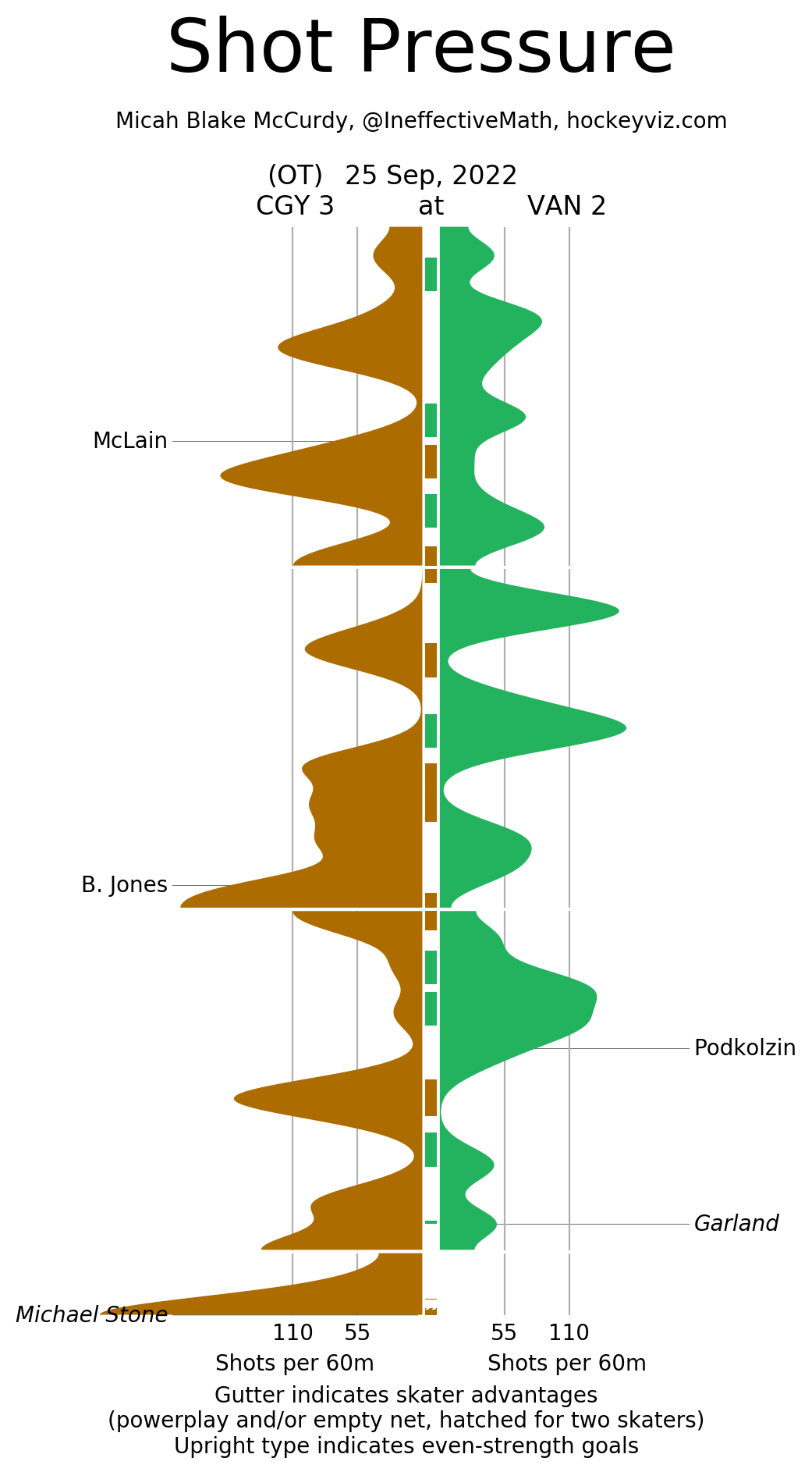 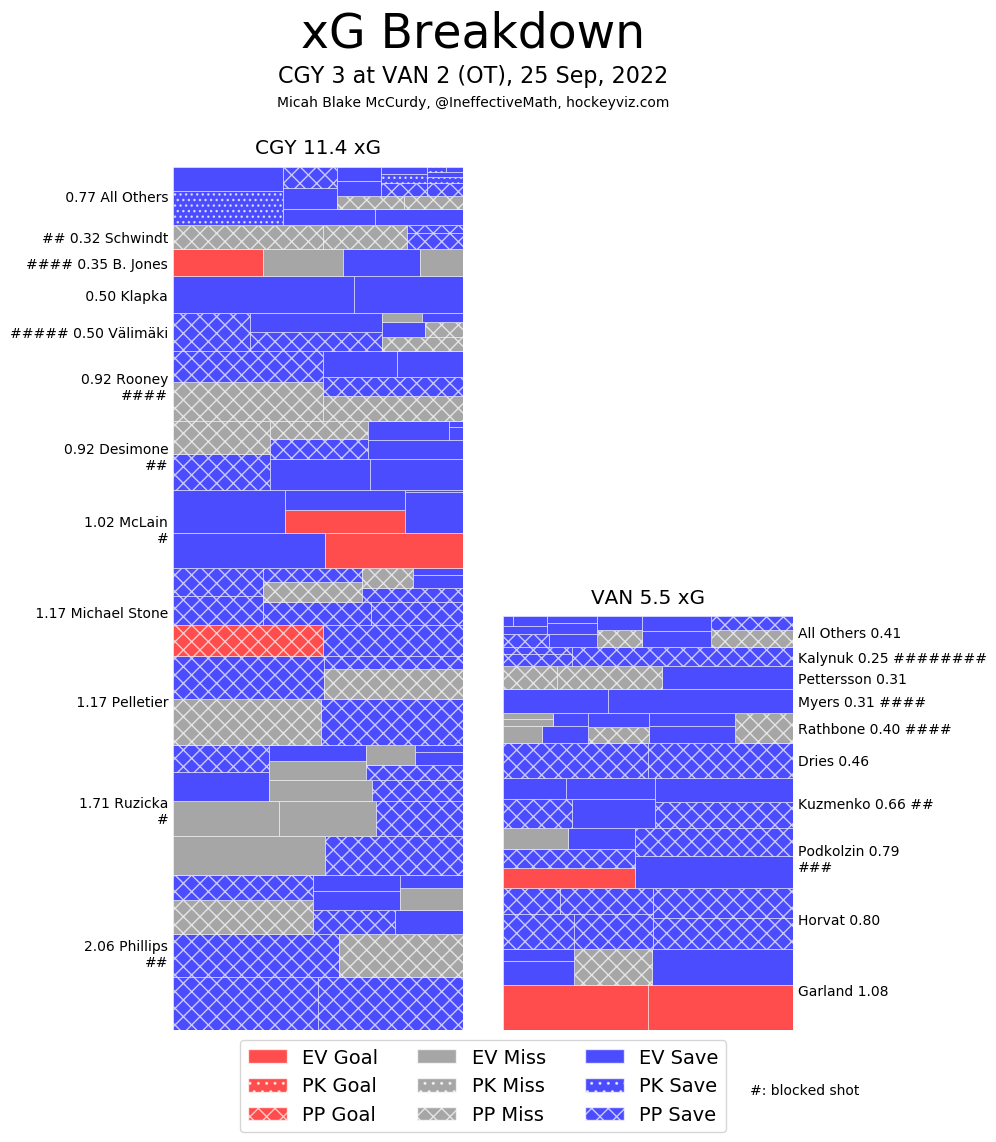 xGF% – Just looking at percentages can hurt you – the raw collection totals matter. For instance Valimaki had 0.23 xGF and 0.00 xGA for 100% xGF% ratio. Ben Jones (100 xGF%) finished with the same, but his totals were 0.01 xGF and 0.00 xGA. The most marginal of differences but the player gets slapped with 100%. It’s why putting major stock into one-off games is dangerous. One-off number tracking can tell us who had a good and bad day but doesn’t normally tell you growth patterns. Larger sample sizes are necessary before making actualizations or accurate predictions about players. That all being said – it was a nice bank shot goal from Ben Jones.
Game Flow –

With all the breaks for special teams it was hard to discern any decent flow. The refs are just getting into the swing of things too so it may be like this for the next few days to come.
Game Score – Now this may be called Beyond The Boxscore, but I’m not naive enough to say boxscore stats don’t matter. Heck, you can’t win a game without them. Game Score encompasses both the fancy and the gritty stats into one evaluation. Ben Jones (1.98) led the Flames with his goal and an assist, Jakob Pelletier (1.47) and Nick DeSimone (1.44) rounded out the top 3. Cole Schwindt (-0.02) was the only Flames skater in the negatives and he barely dipped his toe in.
Shot Heatmap – 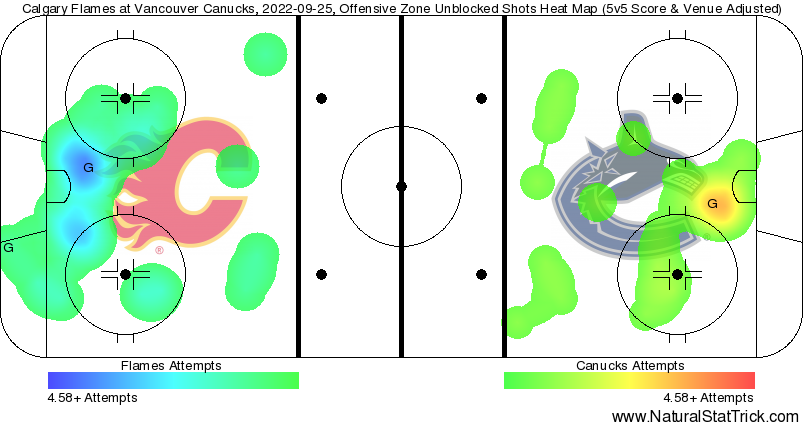 Associate Coach Kirk Muller had his guys get to the crease as often as the could, unfortunately they gave up more from the middle then they’d maybe have liked to. Not a lot of attack from down low though – the defence didn’t allow for much to come out of the corners.
In The Crease – Dustin Wolf had to make 8 5v5 saves, only 2 of which were classified as high danger. He stopped all 0.32 expected goals against. I’ve got my own personal rules for evaluating goaltenders – one such one is to never blame them for the goal if the attacking player is allowed to walk into the crease/slot uncontested by a defender… just like the Podkolzin goal. Wolf was very sharp, as he should be after his multiple starts in Penticton.
Today’s Specials – Not the top power play units and 6 kicks at it, gives a lot of very skilled players some better looks. The puck possession and movement was executed decently, but they needed more success in getting dangerous looks. The penalty killers got a lot of reps which may be the best outcome of this game.
Player Spotlight – Matthew Phillips – The most noticeable Flame on the ice not named Dustin Wolf. He had quick hands and great vision all night. Sonny Milano is in camp on a PTO and is on record as saying he was told there was a top nine spot open. I have no doubt that Matthew Phillips also wants to fight and get that spot. The odds may be stacked against him – but if he plays like that consistently as camp progresses it will make things interesting.
The Goals –
Flashalytic’s 3 Stars –
1) Dustin Wolf
2) Matthew Phillips
3) Ben Jones
The Flames next pre-season tilt is Tuesday from Seattle at 8 p.m. MT, streamed on the Flames website.
(Stats compiled from Naturalstattrick.com // Game Score from Hockeystatcards.com // Some Charts via HockeyViz.com)