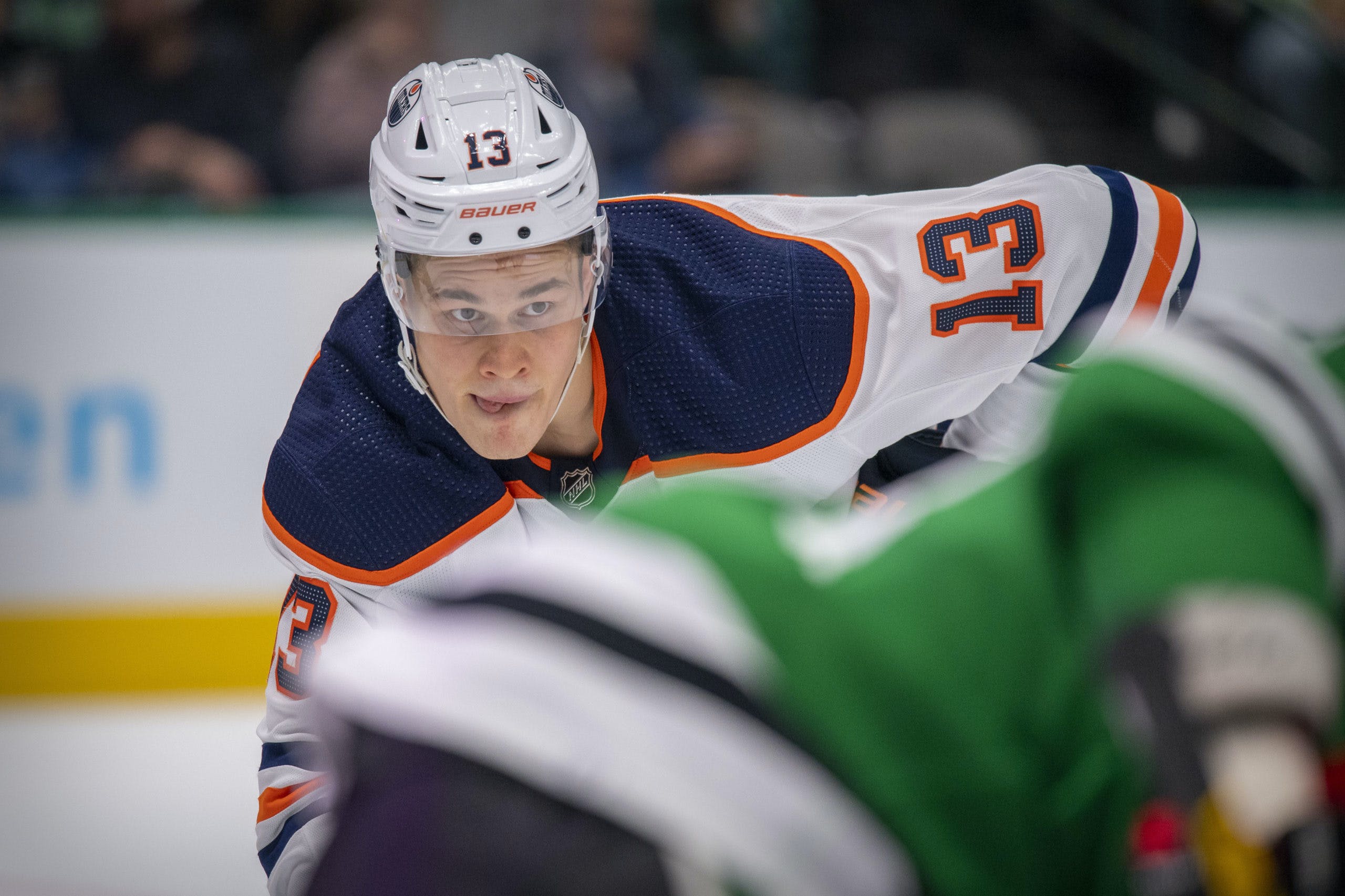 By Mike Gould
7 months ago
Welcome to FlamesNation’s 2022 Trade Targets series, in which our team of writers takes a look at some of the players around the league either in need of a change of scenery or rumoured to be on the market.
The Calgary Flames and Edmonton Oilers aren’t exactly regular trade partners.
In the 42 years since the Flames moved to Calgary, they’ve made exactly three deals with their provincial rivals. That’s right: three. However, it’s also important to note that all three of those Battle of Alberta trades have gone down relatively recently.
The Flames and Oilers made their first player-for-player swap in 2010. Three different Flames GMs have made trades with the Oilers; three different Oilers GMs have made trades with the Flames.
Before we dig into the topic of this piece, let’s take a quick peek at those three deals:
Under current management, the Flames and Oilers have pulled off one relatively major trade. Who’s to say they couldn’t make another?
Let’s return to the present. The Flames just lost the first playoff Battle of Alberta in 31 years. The Oilers followed up their win over Calgary by being swept by the Colorado Avalanche in the Western Conference Final. For both teams, the off-season has begun.
The Flames have a whole host of their own problems to work out over the next few weeks. Johnny Gaudreau is hurtling toward unrestricted free agency with no contract extension in place. Matthew Tkachuk and Andrew Mangiapane are both pending RFAs and one year away from hitting the open market. The team has very few draft picks and even less cap space.
Up in Edmonton, things are slightly clearer — but not by much. Evander Kane’s next contract is going to be ridiculously expensive, and there’s no guarantee it will be with the Oilers. The defence is still a bit of a work in progress. Mike Smith might retire, which would leave the Oilers in even more desperate need of a goaltender.
Then, there’s the question of Jesse Puljujarvi and Kailer Yamamoto. The two young forwards were jointly listed at No. 15 on Frank Seravalli’s latest “Trade Targets” board, with the Daily Faceoff insider saying this about the Oilers’ path forward:

It’s a safe bet that one of these two players will not be returning to the Oilers next season. Both are fan favorites. But both require new deals, likely both raises, and GM Ken Holland acknowledged that Edmonton will have to watch every dollar. “Am I willing to trade some assets in a deal that will make us better? Yes I am,” Holland said Wednesday. Edmonton’s preference would likely be to keep Yamamoto, but he would bring the bigger return.

Yamamoto is a year younger than Puljujarvi. He also scored slightly more in 2021–22. Yamamoto is eight inches shorter than Puljujarvi but he’s also a good stylistic fit next to Leon Draisaitl, who was his consistent linemate all year long.
Puljujarvi is a bit of an enigma. He’s big and skilled, but he sometimes has trouble converting on his chances. That being said, there’s reason to believe he could be on the cusp of becoming a highly impactful player in the NHL — one who could make the Oilers regret moving on from him, if they were to do so.
The obvious comparable for Puljujarvi is Valeri Nichushkin, who found new life after signing with the Avalanche in 2019 and emerged as a 25-goal, 52-point scorer during the 2021–22 regular season.
The Dallas Stars drafted Nichushkin way back in 2013. He struggled to find his footing over parts of three seasons with the Stars before heading back to Russia in 2016. After spending two years with CSKA Moscow, Nichushkin returned to Dallas in 2018 for one last go-round with his original NHL team.
Nichushkin scored zero goals in 57 games with the 2018–19 Stars. He joined the Avs the following summer and found a new niche as a defensive bottom-six forward who could chip in the odd goal; after taking that initial step with Colorado, Nichushkin progressively got to the point where, at age 27, he finally turned into a legitimate top-six option.
Puljujarvi, like Nichushkin, left North America after his first three NHL seasons to return to his home country. Also like Nichushkin, Puljujarvi came back a better player.
The 24-year-old forward has been more than capable of filling a role as an everyday player in the Oilers’ lineup over the last two seasons. He scored 14 goals and 36 points in 65 games with Edmonton in 2021–22.
The Oilers originally selected Puljujarvi with the No. 4 pick in the 2016 NHL Draft, two spots before the Flames snagged Matthew Tkachuk. The 6’4″ Finn had a tough go early on in Edmonton and spent significant time in the AHL before signing with Karpat in the Finnish Liiga for the 2019–20 season.
Puljujarvi emerged as a star with Karpat and carried that positive momentum back to Edmonton when he returned for the start of the pandemic-shortened 2020–21 season. He played all but one of the Oilers’ games in the regular season, scoring 15 goals and 25 points in 55 appearances.
Even beyond his improved production, Puljujarvi became one of the Oilers’ most impactful possession drivers upon his return to the NHL.
Over the past two seasons, Jesse Puljujarvi has spent 1156:55 playing with Connor McDavid at five-on-five and 516:24 without him. According to Natural Stat Trick, the Oilers controlled 58.66 percent of the expected goals during Puljujarvi’s shifts with McDavid — basically as high as you would expect with one of the best players in the world on the ice.
But during Puljujarvi’s shifts without McDavid in the last two seasons, the Oilers still controlled 57.11 percent of the expected goals. Only three NHL teams — Boston, Florida, and Toronto — exceeded a 55.00 expected goals percentage over the entire 2021–22 season, and none of them went beyond 57.00.
Did those expected goals translate to actual goals for Puljujarvi? Well, yes! He’s been above a 50% five-on-five goals-for share both with and without McDavid on the ice over the last two seasons. In 2021–22, the Oilers outscored their opponents 17–13 with Puljujarvi on the ice and McDavid on the bench.
Puljujarvi is a big guy (6’4″, 201 pounds) who brings the skill of a high draft pick. He’s also been the target of heavy criticism in Edmonton for much of the season, with much of it focusing on his perceived lack of finishing talent. Fans and media in the provincial capital have proposed moving him off McDavid’s wing or, at times, even making him a healthy scratch.
As a restricted free agent this summer, Puljujarvi is set to command a one-year qualifying offer worth $1.41 million. His next contract will likely cost more than that, although it’s hard to guess by how much.
We’ve seen the Flames add young players with high draft pedigree and turn them into stars. Elias Lindholm comes to mind as somebody who had a strong reputation as a two-way forward in Carolina before coming to Calgary, finally figuring out his shot, and emerging as a two-way star in the NHL.
Puljujarvi doesn’t have to turn into Lindholm to be a successful NHL player, but it’s not hard to imagine him taking a few steps forward in a better environment. Of course, as mentioned, the Flames have a ton of things to sort out this summer. Who knows if the Oilers would have any appetite to send Puljujarvi down the QE2.
All that being said … the Oilers really should not trade Puljujarvi. The Flames may have lost the Battle of Alberta, but taking Puljujarvi from Edmonton would be a great way to get back at their provincial rivals while also strengthening their team.
It would be great for the Flames if the Oilers were to trade Puljujarvi. It would be even better for the Flames if the Oilers traded Puljujarvi to them.