The Calgary Flames need to find an upgrade on Tyler Pitlick 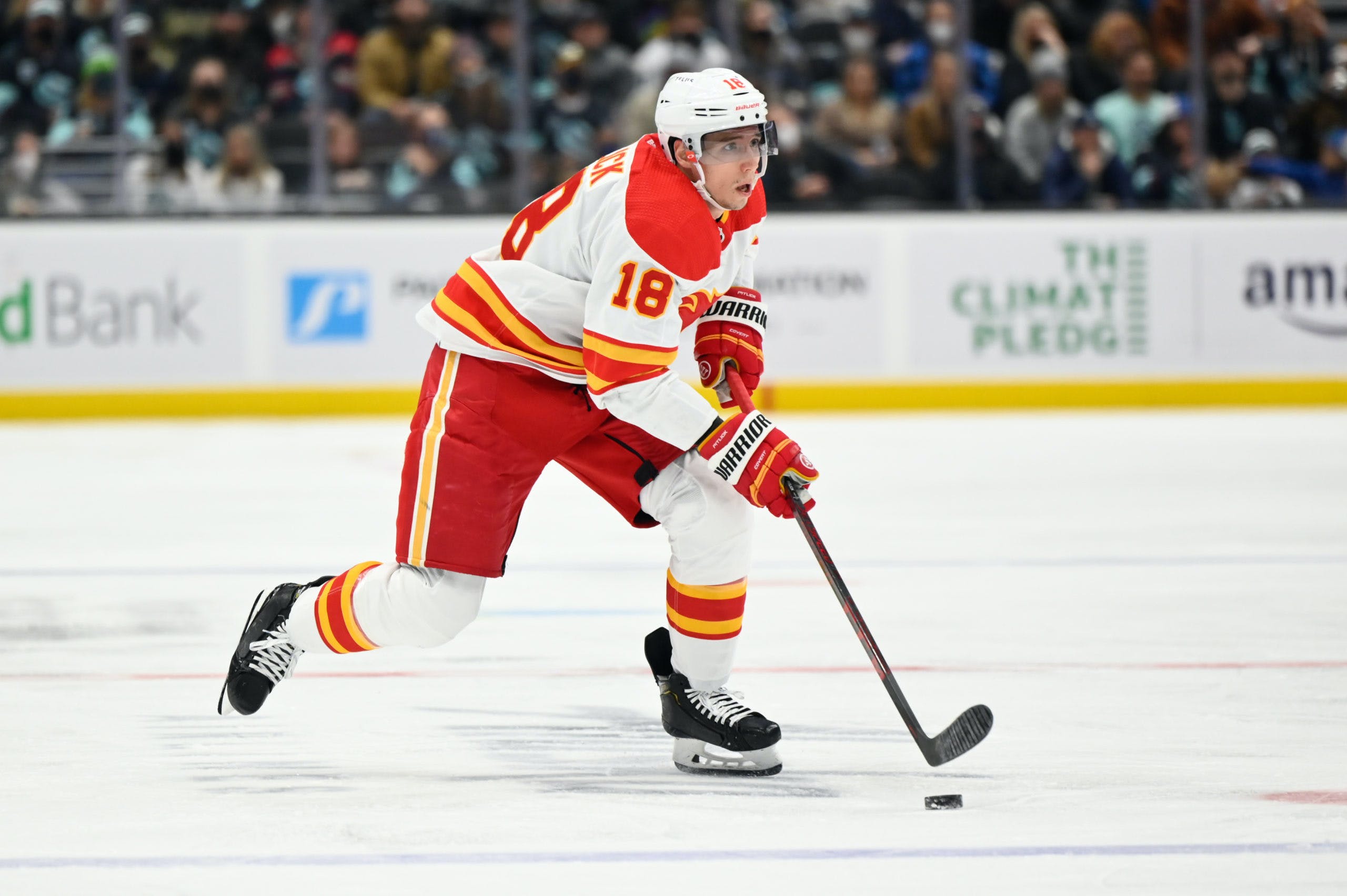 By Mike Gould
10 months ago
The Calgary Flames are a very good hockey team. Sometimes, even the best teams need to make changes.
When the Flames acquired @Tyler Pitlick from the Seattle Kraken this past July, they undoubtedly hoped he’d be able to help solidify the team’s defensive game while also chipping in some secondary scoring.
Those weren’t wholly unreasonable goals. Pitlick managed to score 14 times in 80 games with the Dallas Stars in 2017–18 and followed that up with 22 more in 153 contests over the next three seasons, which he split between the Stars, Philadelphia Flyers, and Arizona Coyotes.
Pitlick has never been a particularly strong penalty killer and the Flames, perhaps recognizing this, have opted against using him in that role. In past seasons, however, Pitlick has been an impactful defensive forward during 5-on-5 play.
In 2020–21, the Arizona Coyotes averaged just 2.16 expected goals against (xGA) over every 60 minutes Pitlick played (according to Natural Stat Trick). Among the 21 Coyotes who played more than 200 minutes at 5-on-5 last season, Pitlick’s on-ice xGA per 60 figure ranked fifth.
Pitlick posted similar numbers during his tenures with the Flyers, Stars, and even the Edmonton Oilers. It’s been a much different story for him this year, though.
For every 60 minutes Pitlick has been on the ice at 5-on-5 this season, the Flames have surrendered 2.29 expected goals. Only @Brad Richardson, @Erik Gudbranson, @Trevor Lewis, and @Dillon Dube have fared worse in that category this year.
Unfortunately, Pitlick’s below-average defensive results pale compared to his lack of offensive production. Individually, he’s averaging just 0.23 points per 60 (the worst — by a lot — among Flames skaters, min. 100:00 5-on-5 TOI), 0.35 expected goals per 60 (worst among Flames forwards), 4.21 shots per 60, and 9.82 shot attempts per 60 (both second-worst among Flames forwards).
Pitlick has two points in 23 games this season and hasn’t managed to find the scoresheet since Oct. 30. One of his points was the first assist on an empty-net goal; the other was a secondary helper. He has zero primary points during his 256 minutes of 5-on-5 play this season.
These numbers aren’t particularly fun to recite. It’s seldom an enjoyable exercise to detail all the ways a player is underperforming. Pitlick has suffered multiple injuries this season and was one of many Flames players to enter the NHL’s COVID-19 protocol in December. It’s been a tough year on multiple fronts for the 30-year-old forward.
In Pitlick’s case, an American Hockey League assignment might be best for both player and team. He’s clearly struggling to find a foothold in the Flames’ lineup and has mustered just two total shots on goal in his last seven games.
Sunday night in Chicago, Pitlick occupied a spot next to @Blake Coleman and @Mikael Backlund on the Flames’ third line. Both of those players kill penalties and are guaranteed significantly more job security because of their respective histories and contracts. Neither has produced up to expectations this season.
The Flames look to be short at least one top-nine forward. Overall, the team still lacks finishing talent. If the Flames want to create a balanced lineup suited to do damage in the playoffs, upgrading on Pitlick would be a good way to address both those issues at once.
Demoting Pitlick to the AHL and, in the interim, replacing him with a league-minimum player — say, @Glenn Gawdin or @Matthew Phillips — would give the Flames a prorated $375,000 in extra cap space. Bringing up Stockton Heat leading scorer @Jakob Pelletier would still save the Flames $261,667. Pelletier, Phillips, and Gawdin are all scoring at or above a point-per-game pace in the AHL.
That said, the Flames would likely be better served to bring a proven top-six talent in from another team. In such a case, they’d probably have to get more creative on the financial side — maybe @Nikita Zadorov would have to go the other way — but it’d be worth it to bolster a team that’s already outplaying most of its opponents on a nightly basis.
With @Johnny Gaudreau, @Matthew Tkachuk, @Andrew Mangiapane, and @Oliver Kylington all in need of raises this summer, this could very well be the year for the Flames to go for broke. Among other things, that means finding better players than Pitlick, Richardson, and Zadorov to fill spots in the lineup on a nightly basis.
Replacing Pitlick is the first (and easiest) step the Flames should take toward optimizing their lineup.
Uncategorized
Recent articles from Mike Gould