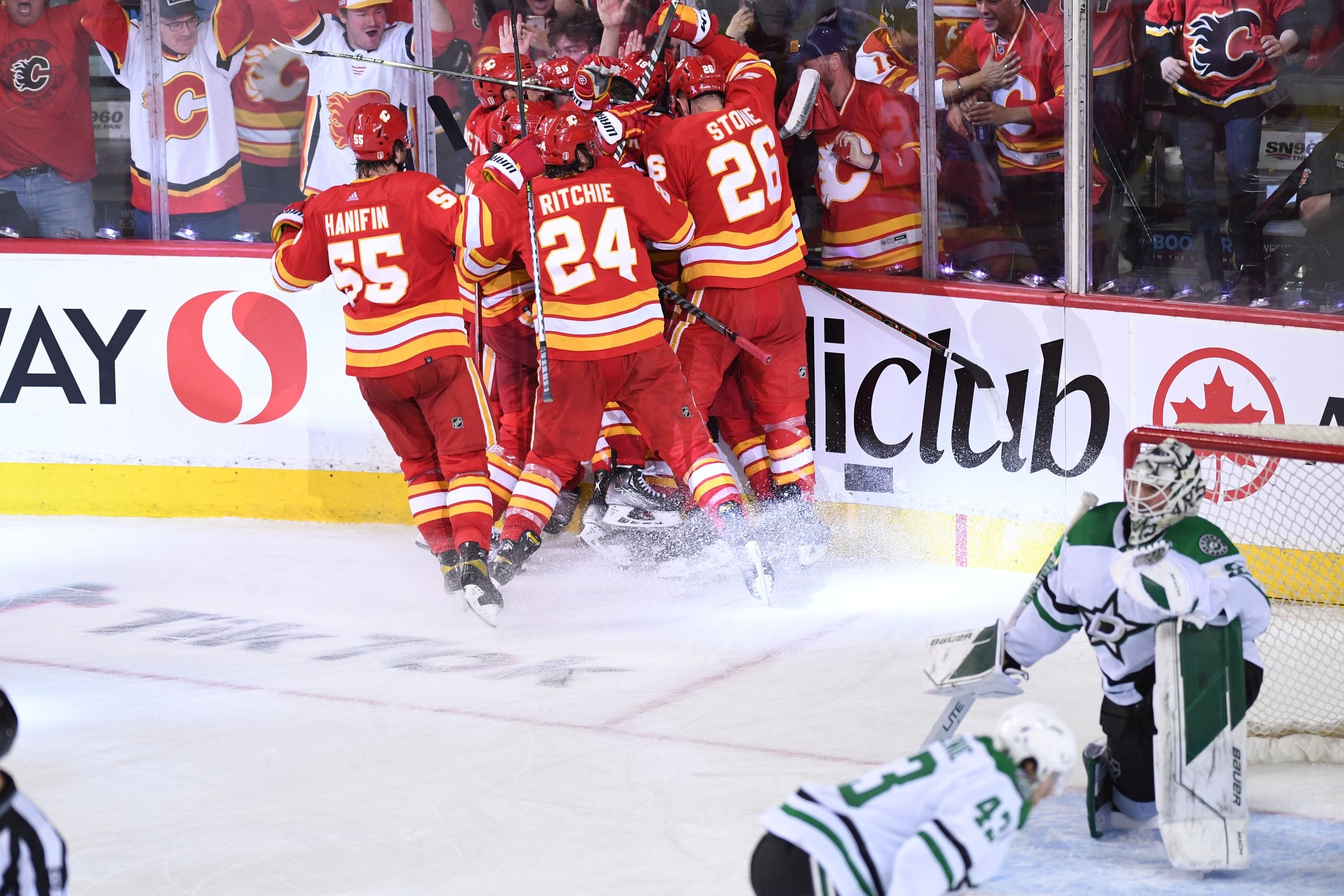 By Ryan Pike
6 months ago
The Calgary Flames and Dallas Stars went the distance, both in their series and in their deciding Game 7. The two teams battled all the way to overtime, with Johnny Gaudreau’s overtime winner lifting the Flames to a 3-2 victory in Game 7 and a 4-3 series win.
The recap is here, if you missed it. Here are selected highlights and post-game comments from Sunday night.

Head coach Darryl Sutter
On Jake Oettinger: “He was the best player in the series, that’s for sure.”
On the team sticking with it during the series: “You’ve got to be mentally tough. You want to make the playoffs? You want to win four games? You want to play seven games? That’s the way it works. The process, you’ve got to learn it, figure it out.”
On Johnny Gaudreau: “Johnny had a really strong series, to be quite honest, so it’s good that he got the game-winner, the series-winner.”
On what he wants his group to take from the series: “I want them to get a rest. There’s not much philosophy now.”
On the team staying even-keen in a wild environment: “We deserved to win. We took 100-and-some shots. If we’d have lost, I know what you’d have been saying. So we deserved to win. Questions and answers. We deserved to win. Simple.”
Johnny Gaudreau
On scoring the game-winning goal: “It was awesome. It was a tight series throughout the whole week or two weeks here, and it came right down to the end there, in Game 7 overtime. Like you said, I mean, you dream about stuff like that, scoring in a Game 7 in overtime. Nice play by Chucky behind the net, found Lindy in front, and I got the rebound.”
On where this goal ranks among the goals he’s scored: “Is that a question, really? Come on. There’s no bigger stage than what we just did there. It was really special for me. I was really excited. I thought our line, you know, kind of came out a little flat-footed tonight. We gave up two goals and we knew we had to get them back. Chucky had a big goal for us in the second there. The way we were scoring after they scored their second goal, I thought one of the three of us was going to get it. I’m happy for those two guys. We played well after those two goals.”
On what Darryl Sutter told them post-game: “He was just telling us he’d let us know when the next round is, pretty much.”
On the upcoming Battle of Alberta: “I’ve been here for nine years and never had even a sniff of a chance to play them in the playoffs. It’s pretty special and it’ll be a lot of fun. It’s going to be good for the province. It’s going to be a pretty cool series.”
Matthew Tkachuk
On the series win: “It was just such a hard series to win. Feels very good, but we don’t want to stop there.”
If he’s seen the photos of brother Brady throwing t-shirts at the Red Lot: “I have not, but he’s on quite a tear since his season ended so I can only imagine.”