FlamesNation’s mock first round of the 2021 NHL Entry Draft 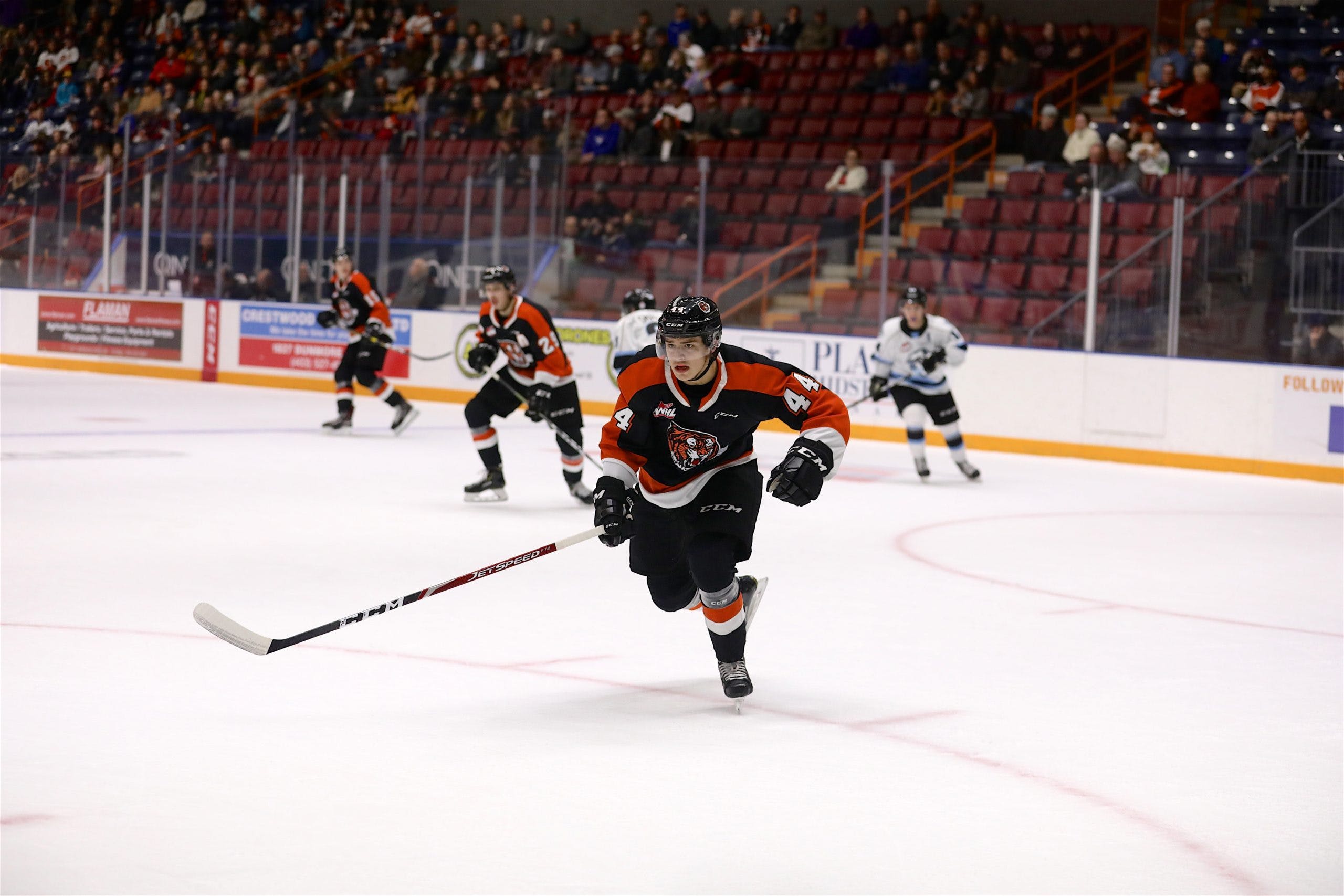 By Mike Gould
1 year ago
Draft day is upon us!
The Calgary Flames currently possess seven picks in the 2021 NHL Entry Draft, including the 13th selection in the first round. Last year, they added Connor Zary to their prospect pool with the 24th overall pick.
We here at FlamesNation have spent the last month profiling various players likely to hear their names called in the first round of the 2021 draft. Now, it’s time for me to take a shot at projecting how the first 32 selections will unfold.
Without much further ado, let’s start at the top. (If a player’s name features a hyperlink, you can click on it to find our corresponding “draft targets” piece).

Power is a massive 6’6″ defenceman who acquitted himself extremely well as a freshman at the University of Michigan in 2020–21. While some say he’s planning a return to Michigan for 2021–22, Power remains the consensus top pick for this year’s draft.

What better way for an expansion franchise to kick things off than by selecting the top centre available in their inaugural draft? Beniers starred alongside Power on that same Michigan Wolverines team, finishing third on the team with 24 points (10 goals, 14 assists) in 24 games.

The Ducks already have two projected franchise cornerstones in centre Trevor Zegras and defenceman Jamie Drysdale. Who better to play on Zegras’ wing than Eklund, who managed to outscore New Jersey Devils 2020 seventh-overall pick Alexander Holtz with Djurgårdens IF in the SHL despite being 10 months younger?

New Jersey has plenty of promising young options up front but has selected just two defenders in the first round since 2011 (Ty Smith and Shakir Mukhamadullin). Luke Hughes was a standout with the U.S. National Team Development Program in 2020–21 and is committed to those same Michigan Wolverines beginning in 2021–22. If two of the three Hughes brothers were to land in New Jersey, one might wonder whether the Devils could ever get an opportunity to complete the set…

Edvinsson is another pillar on the back-end, standing 6’5″ and weighing 207 pounds. He’s a defence-first rearguard who would immediately become the top dog in a very depleted Blue Jackets prospect pool. Columbus hasn’t drafted a defenceman in the first round since picking Zach Werenski in 2015; with Seth Jones reportedly on his way out, they’ll need to start solidifying their future on the blueline.

Even after acquiring 2021 Calder Trophy finalist Alex Nedeljkovic from the Carolina Hurricanes, Detroit seems like a safe bet to strengthen its goaltending position by picking Wallstedt in the top-10. The Red Wings have plenty of prospect depth at every other position and Wallstedt has quickly risen into becoming a consensus fixture as part of the top tier of the 2021 draft. If Detroit doesn’t pick him, he’ll be gone soon after.

Like Columbus, the San Jose Sharks need help everywhere. Clarke is an excellent two-way defenceman who scored 38 points in just 57 games as a first-year OHL player in 2019–20. Projected by some to go as high as No. 2 overall, Clarke almost certainly gets nabbed by the Sharks if he’s still available at their slot.

Guenther is a tremendous goal-scorer who might be able to fit nicely on a line alongside Quinton Byfield or Alex Turcotte. He’s a right-handed winger with a big frame and a bigger shot.

Johnson is a Vancouver-born centre who — surprise, surprise — also played for the Michigan Wolverines in 2020–21. He actually outscored Beniers, tallying nine goals and 27 points in 26 games.

Chicago has Kirby Dach and Lukas Reichel but still needs all the forward help it can get. Lucius is another goal-scoring centre who shoots right and scored 13 goals in 12 USHL games last season.

Sillinger would be a prototypical “Flames-y” pick at 13th overall. He’s a well-built centre who scored a ton of points as a 16-year-old WHL rookie with Medicine Hat in 2019–20 before heading to the USHL for the 2020–21 season. The Flames heavily scout both those leagues and would undoubtedly relish the opportunity to add a 6’0″, 201-pound pivot to the organization.

The Flyers definitely need a ton of help at centre but they’d likely opt for the best player available with both Sillinger and Lucius off the board. Coronato is from the east coast and demolished the USHL while playing with the Chicago Steel in 2020–21, setting a franchise record with 48 goals in 51 games.

Dallas has a relatively thin prospect pool and would benefit greatly from adding Lysell. He’s a skilled, small-ish winger who has thrived in Sweden’s junior levels and acquitted himself decently in 26 SHL games last season.

With wingers Alexis Lafrenière, Kaapo Kakko, and Vitaly Kravtsov having all joined the Rangers’ pool of young talent in the last three drafts, the team could sure use another centre. Svechkov is one of the best two-way forward prospects in the 2021 class.

Stankoven would be a slight reach at No. 17 but he’s a tremendously skilled and versatile forward who scored 36 goals in 65 WHL games with the Kamloops Blazers over the last two seasons. He’s also 5’8″, which might scare some teams away.

Lambos is a Winnipeg-born rearguard who currently plays at Wayne Fleming Arena with the WHL’s Winnipeg Ice. He’s a superb skater whose dynamic ability is sorely needed on the Jets’ underwhelming blue-line.

Räty would be a boom-bust pick for a team desperately in need of a “boom.” Regarded as a potential top-three pick for this year’s draft after his stellar age-15 performance in Finland’s U-20 league, Räty has since struggled to find consistency and was even left off Finland’s World Junior team earlier this year. Still, his raw potential would be appealing at this point in the first round.

The Oilers’ current goaltending situation is not particularly promising. Veterans Mike Smith and Mikko Koskinen continue to make up the team’s NHL tandem, with Stuart Skinner and Ilya Konovalov currently the only goaltending prospects of note in the Oilers’ system. Cossa has been lights-out in the WHL with the Edmonton Oil Kings, having posted a 17-1-1 record with a .941 save percentage in 2020–21.

Boston already has a forward named Karson Kuhlman, so why not make things even more confusing by drafting a defenceman with an eerily similar name? Ceulemans is a hefty right-shot rearguard who put up big offensive numbers with the Brooks Bandits in the AJHL over the past two seasons.

Chayka looked like a surefire 2021 first-rounder after his performance with the Guelph Storm in 2019–20. The age-16 lefty scored 11 goals and 34 points in 56 games, good to lead all Storm defenders in scoring. He returned to Russia in 2020–21 and bounced around, spending time in the KHL, VHL, and MHL and failing to establish much of a foothold anywhere. Chayka stands 6’3″ and remains one of the most intriguing defensive prospects in the class; he’d be a good value pick for Minnesota at No. 22.

Like Lysell, Rosen has been an excellent producer in Sweden’s junior ranks and received his first taste of SHL action in 2020–21. Detroit’s system is relatively strong at every skater position but Rosen would immediately become one of the Wings’ most intriguing prospects on the right side.

Believe it or not, Florida hasn’t picked a defenceman in the first round since Aaron Ekblad went to them with the top selection of the 2014 NHL Entry Draft. Zellweger is an extremely young draft-eligible prospect — born five days before the 2022 cut-off — and scored at a 1.18 point-per-game pace with the WHL’s Everett Silvertips this season.

After taking a defenceman earlier in this mock, Columbus’ next target would likely be a forward. Chibrikov is a left-shot winger who — like many Russian-trained players — plays on his off-side. He’s fast, productive, and has more KHL experience than almost every other first-year draft-eligible player in the 2021 class.

Robertsson played extremely well last season in Sweden’s U-20 league, scoring nine goals and 20 points in 15 games with Skellefteå. He’s not the biggest player — 6’0″, 190 pounds — but he plays with force.

Bourgault would be a quintessential high-upside Hurricanes pick. He’s been extremely productive with the QMJHL’s Shawinigan Cataractes over the last two seasons, scoring a total of 111 points (53 goals, 58 assists) in just 92 games. Bourgault is a right-shot centre who can also slot in on the wing; born on Oct. 22, 2002, he’s one of the oldest players in the 2021 draft class.

The Avalanche haven’t picked a centre in the first round since they took Tyson Jost in 2016. Pinelli and Mason McTavish scored at similar rates in the 2019–20 OHL season, with Pinelli playing two more games and amassing 41 points to McTavish’s 42. However, Pinelli scored 11 fewer goals and — at 6’0″ and 185 pounds — is quite a bit smaller than McTavish.

While he didn’t reach Coronato’s levels, Samoskevich put together a very nice USHL season with the Chicago Steel in 2020–21. The 5’11” winger scored 13 goals and 37 points in 36 games, good to rank fifth on the team (and second among age-17 players) with 1.03 points per game.

Henderson Silver Knights goaltender Logan Thompson looks like a solid future option for Vegas; however, the NHL’s second-newest franchise has never drafted a goaltender higher than the fourth round of an NHL Entry Draft. As a 16-year-old, Gaudreau posted the best save percentage (.890) on a very weak 2019–20 Sarnia Sting team.

Pastujov is a talented distributor who would become just the second winger drafted by the Canadiens in the first round since 2014. He’s a Florida-born lefty who represents the United States internationally; he scored 26 points (10 goals, 16 assists) in 18 USHL games with the U.S. National Team Development Program in 2020–21.

Defenceman? Check. Winger? Check. For Columbus’ third pick in the first round, let’s say they’ll take the best centre available. Bolduc could feasibly go much higher than pick No. 32 after scoring 40 goals and 81 points in 82 QMJHL games with Rimouski over the last two seasons.
Uncategorized
Recent articles from Mike Gould