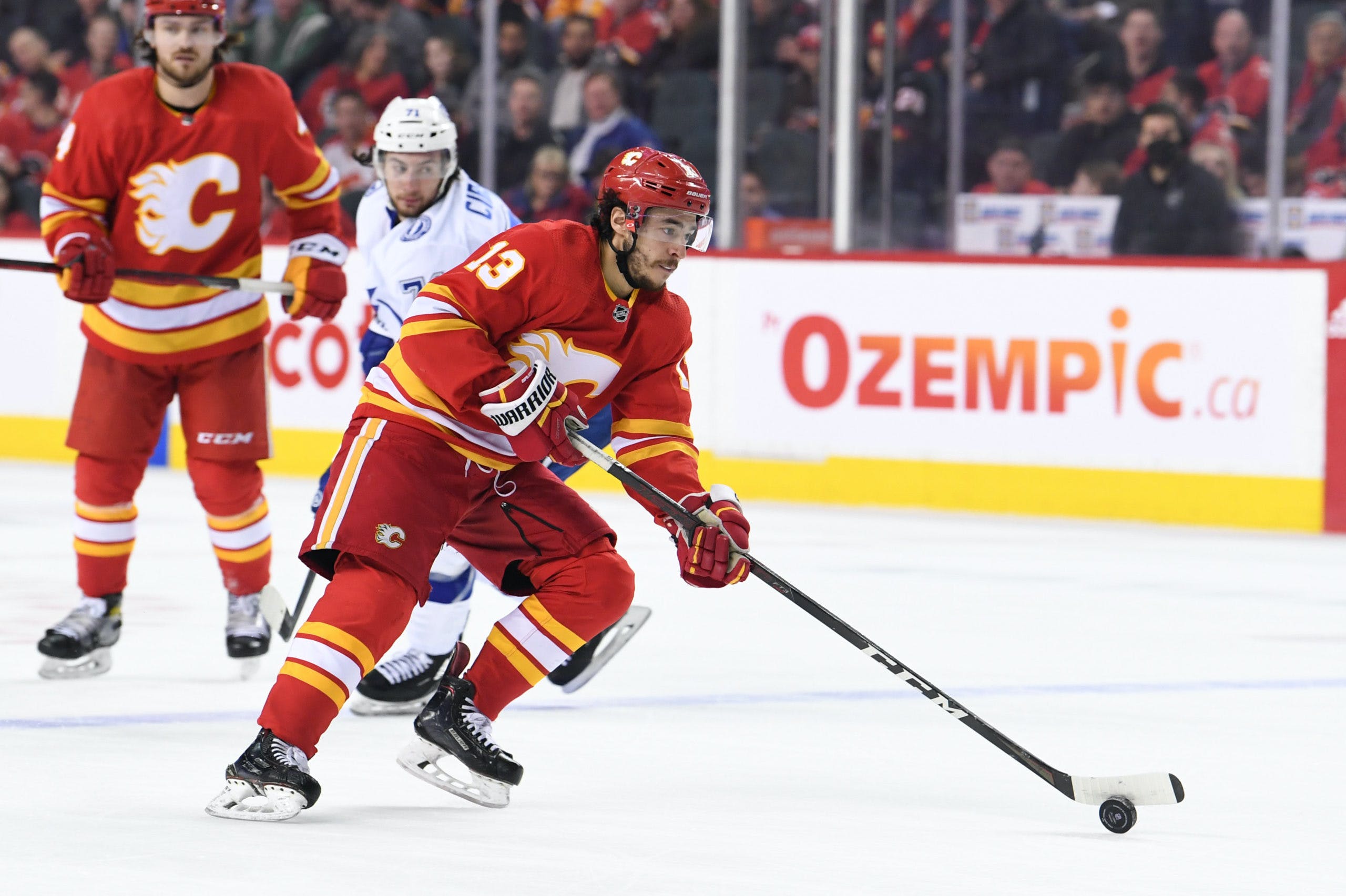 By Mike Gould
8 months ago
@Johnny Gaudreau was up to his old tricks on Thursday, tallying three goals to help his Calgary Flames knock off the defending back-to-back Stanley Cup champion Tampa Bay Lightning by a 4–1 final score.
Gaudreau got the party started at the 7:35 mark of the first period. With the Flames on the power play, Gaudreau found some open to space to @Andrei Vasilevskiy’s right and managed to bank the puck off the Lightning goaltender’s pants and into the net.
@Tyler Toffoli and @Rasmus Andersson picked up the helpers on Gaudreau’s 24th goal of the season, which gave the Flames an early 1–0 lead.
After Lightning forward @Alex Killorn made it a 1–1 game late in the second period, Gaudreau struck back with exactly one minute remaining in the middle frame.
Surprise, surprise: Gaudreau scored from basically the exact same spot as his first goal (except at the other end of the ice). This time, “Johnny Hockey” banked the puck off Vasilevskiy’s nameplate to score.
Gaudreau’s 25th goal of the season gave the Flames a 2–1 lead, with @Matthew Tkachuk assisting. @Mikael Backlund scored 52 seconds later to make it a two-goal game.
The Flames carried their 3–1 lead into the third period and it remained until Gaudreau completed his trifecta at the 13:44 mark of the final frame.
While Gaudreau didn’t bank the puck off Vasilevskiy to score his third goal, the play did begin behind Vasilevskiy’s net. Flames centre @Elias Lindholm set up below the goal line and faked to his left before finding Gaudreau in the low slot with a perfect pass.
The 29-year-old winger successfully one-timed the puck past Vasilevskiy for his 26th goal of the season (and his third of the night).
The Flames’ 4–1 advantage ultimately stood as the final score on Thursday. Calgary goaltender @Jacob Markstrom made 30 saves for the home side and was named the game’s second star; Vasilevskiy stopped 28 of 32 shots for the Bolts.
Gaudreau recorded his sixth NHL hat trick in the victory (and his first since the 2018–19 season). He has scored three goals in these games during his career:
The Flames improved to 35–15–7 with the victory and now have five more points (77) than the second-place Los Angeles Kings (72) in two fewer games.
Gaudreau currently ranks fourth in NHL scoring — behind only @Connor McDavid, @Jonathan Huberdeau, and @Leon Draisaitl — with 77 points in 57 games. His Flames will return to action on Mar. 12 when they host the Detroit Red Wings.