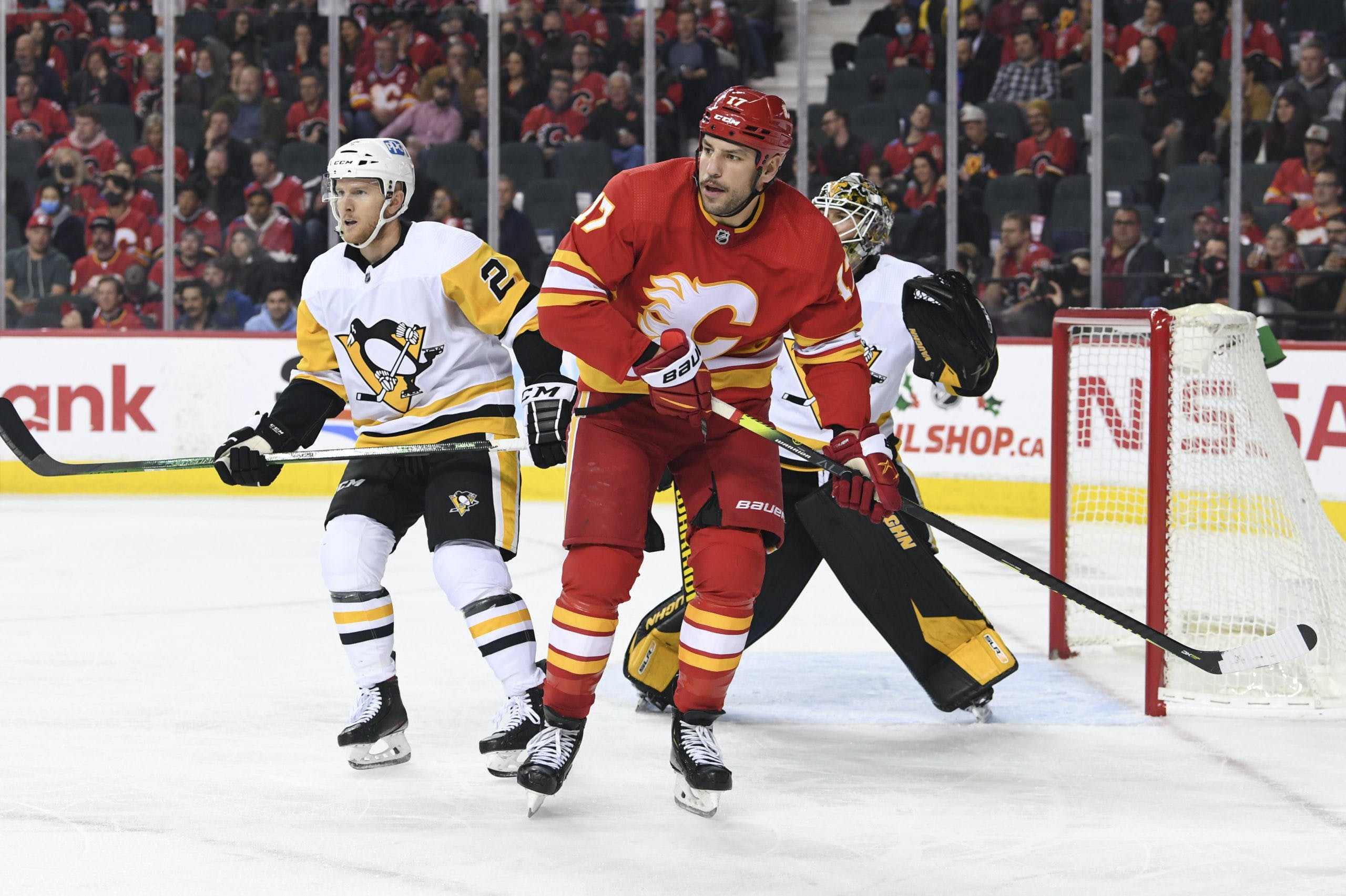 By Mike Gould
1 year ago
@Milan Lucic doesn’t have too many tricks up his sleeve.
The 33-year-old winger has never been one to dazzle fans (and fool opponents) with great speed or smooth dekes. As Lucic has aged, his offensive output has steadily declined and his skating — never his strength to begin with — has become slower.
Nevertheless, Lucic has been on a nice roll to begin the 2021–22 season. His six goals in 22 games rank fifth on the Calgary Flames, with his latest coming in the second period of his team’s 2–1 overtime win over the Pittsburgh Penguins.
For keen Flames followers, Lucic’s goal on Monday looked a little familiar.
After chipping an @Oliver Kylington stretch pass by Penguins defenceman @Chad Ruhwedel, Lucic rumbled in on a 2-on-1 before firing a low, hard wrister through the legs of goaltender @Tristan Jarry.
Now, let’s take a look back at Oct. 28. On that date, the Flames were in the Steel City to take on the Penguins. @Johnny Gaudreau, @Blake Coleman, and @Dillon Dube scored on Pittsburgh goaltender @Casey DeSmith to give Calgary a 3–0 lead by the middle of the third period.
Then, this happened.
That’s right: Milan Lucic has beaten two different Penguins goaltenders with five-hole shots along the ice from the left side on 2-on-1 rushes this season. (Say that sentence five times fast).
After Monday’s win over Pittsburgh, Flames forward @Mikael Backlund came up with a handy moniker for Lucic’s go-to move.
“It was a big goal for us,” said Backlund, who scored the shootout winner for Calgary in the game. “We all love to see Looch five-hole goals … The Power Five.”
Lucic has 24 goals in his 146 regular-season games with the Flames. He’s now scored using “The Power Five” shot in all seven of these games (hyperlinks lead to goal highlights on NHL.com):
(Here’s one more, just for fun. In the second period of the Flames’ 5–1 loss to Ottawa on Mar. 1, 2021, @Matt Murray stopped a “Power Five” shot from Lucic … but allowed him to score on the ensuing rebound.)
Lucic’s current run of shooting is almost certainly unsustainable. He’s currently on pace for his first 20-goal season since 2016–17 despite primarily playing on the Flames’ fourth line. While he’ll probably crack double-digits for the second consecutive season, 20 goals for the current version of Lucic feels like a stretch.
That said, Lucic is absolutely taking more shots (and better shots) right now than he has in recent years. According to Natural Stat Trick, Lucic is averaging 0.57 individual expected goals and 7.26 shots per 60 minutes of 5-on-5 play this season.
The former figure is Lucic’s highest ixG/60 mark since 2017–18 and the fourth-best of his career. The latter is Lucic’s highest single-season shots/60 rate since he broke into the NHL with Boston in 2007–08. While he could still stand to take fewer penalties (especially ones for throwing dirty hits), Lucic’s offensive game has definitely been a positive for the Flames this year.
Last season, Lucic placed 13th among Flames regulars with just 0.44 5-on-5 ixG/60. This year, he ranks seventh. Lucic is producing almost exclusively at even strength and is on pace for his first 100-shot season since his second year with the Edmonton Oilers.
All in all, things are looking pretty decent for Milan Lucic in the early goings of the 2021–22 season. Even when the inevitable regression hits, he’ll likely continue providing the Flames with solid value in the offensive zone. He’s an accurate passer with a hard shot — and he’s using that shot a lot more this year.
When looking at Lucic’s shooting arsenal, “The Power Five” reigns supreme (especially over Pittsburgh Penguins goalies). It’s certainly been fun to watch Lucic fool opposing netminders with increasing regularity while using the exact same shot.
Lucic’s contract is not ideal. The Flames could certainly stand to reallocate some of his $5.25 million for the 2022–23 season toward the likes of @Matthew Tkachuk, @Johnny Gaudreau, @Oliver Kylington and @Andrew Mangiapane.
Is it possible that Lucic has rebuilt his value up to a point where he could be moved for a tangible return? If the Flames want to keep all four of their major pending free agents, they’ll likely need to explore their options on the Lucic trade front in the 2022 off-season.
For now, Lucic is making real contributions to the success of the team sitting atop the NHL’s Pacific Division. Not many could have predicted this outcome three seasons ago, but here we are.
Uncategorized
Recent articles from Mike Gould