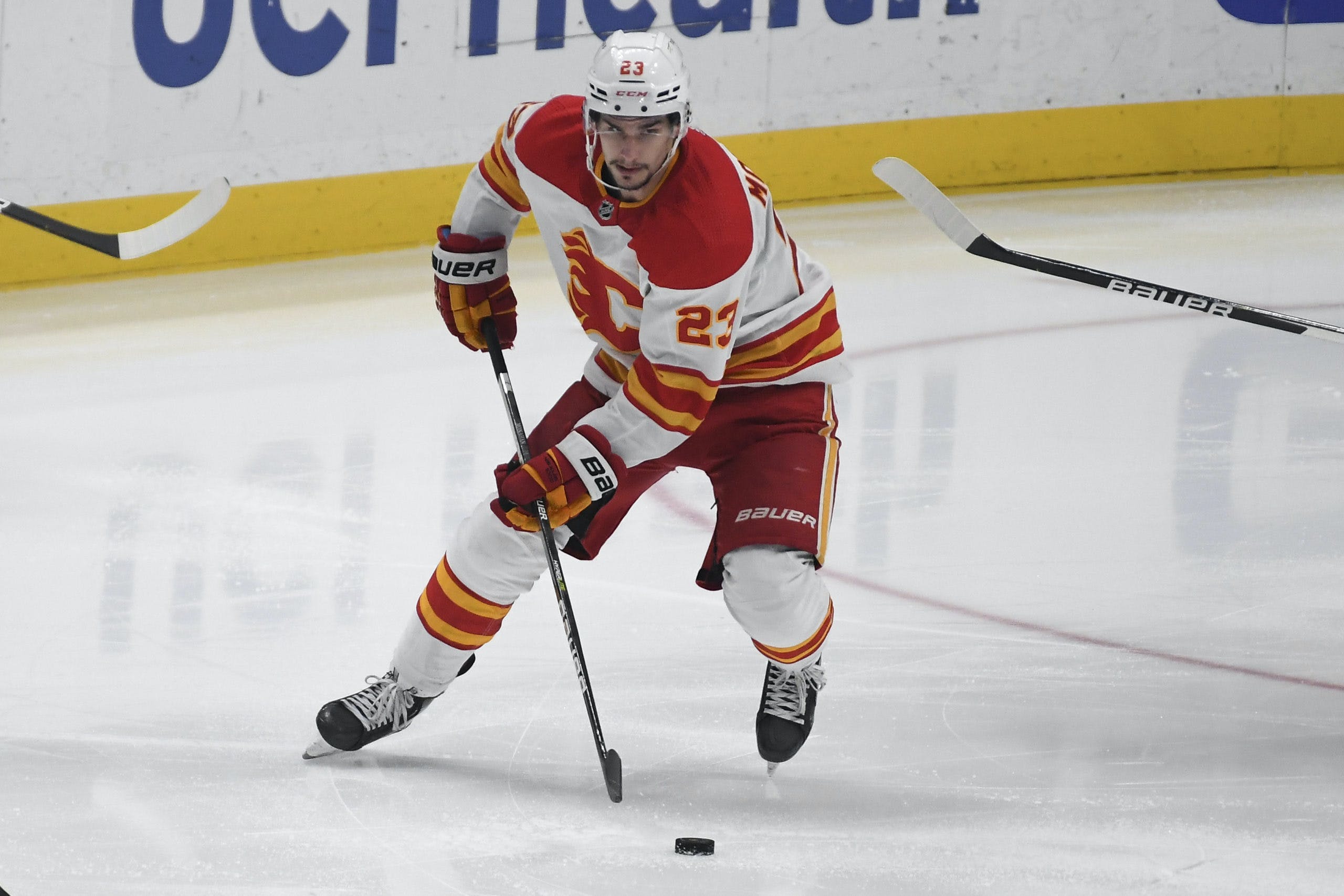 By Mike Gould
7 months ago
Sean Monahan has had a lot of success in the National Hockey League.
The 27-year-old centre has scored more than 25 goals in five NHL seasons since being drafted by the Calgary Flames in 2013. He topped out at 34 goals and 82 points in 78 games with the Pacific Division-winning 2018–19 Flames.
Unfortunately, Monahan is no longer the player he used to be. He’s always been more than willing to go to the dirty areas of the ice to score goals, but it’s come at a cost: he’s taken a brutal beating over the years.
It’s easy to lose count of how many off-season surgeries Monahan has undergone during his NHL career. He’s currently recovering from a right hip operation that prematurely ended his 2021–22 campaign.
Will Monahan ever be able to rediscover anything close to his past form? Let’s take a closer look at how he got to this point.

Monahan almost immediately emerged as an impactful player with the Flames after being selected sixth overall in the 2013 NHL Draft.
Even before Johnny Gaudreau made his Flames debut, Monahan scored 22 goals as a rookie in Calgary. He centred the Flames’ top line the following year, scoring 31 goals between Gaudreau and Jiri Hudler and helping the team reach the second round of the playoffs.
Monahan remained a fixture near the top of the Flames’ lineup for the better part of a decade. He and Gaudreau always made each other better, even while playing with a rotating cast of increasingly obscure wingers (Alex Chiasson? Chris Stewart?? Brett Ritchie???).
Things started to go slightly south for Monahan in 2019–20 and he really hit a wall in 2020–21, scoring just 10 goals in 50 games and being taken off the Gaudreau line after Darryl Sutter replaced Geoff Ward as head coach.
That brings us to this past season, which was Monahan’s least productive NHL campaign to date.

Monahan spent a lot of the 2021–22 regular season — 344:36, to be exact — playing on a line with Milan Lucic.
During five-on-five play, the Flames were outscored 16–6 with those two players on the ice, although they controlled slightly more than half (50.38 percent) of the expected goals.
Monahan finished the season with a minus-15 rating, but that result had more to do with the Flames’ poor on-ice finishing than any defensive failings.
Individually, Monahan ended up with a 7.2 shooting percentage, the worst of his career. With Monahan on the ice at five-on-five, the Flames scored on just 5.12 percent of their shots. Only seven NHL forwards endured worse on-ice finishing over more than 500 minutes of ice time last year.
It’s not as though Monahan didn’t have anything to do with the Flames’ shooting woes during his shifts. He didn’t look himself for much of the season, going weeks at a time without looking remotely dangerous in the offensive zone.
Monahan has never been the fastest player to begin with, but he didn’t look much faster than Lucic in 2021–22. It’s absolutely understandable and not his fault, but it’s just the reality with him after everything he’s been through.
With most of his production coming on the power play, Monahan finished the 2021–22 regular season with eight goals and 23 points in 65 games. He missed the final month of the season and the Flames’ entire playoff run while dealing with a hip injury.

Monahan spent much of his early tenure with the Flames on a line with Gaudreau. Ironically, Monahan remaining in Calgary beyond this summer might depend on Gaudreau leaving.
If Gaudreau ends up re-signing with the Flames this summer, someone will have to go to make room for his new contract. Monahan has one year left at a $6.375 million cap hit and is a natural candidate to be moved in a change of scenery deal.
But if Gaudreau leaves, the Flames may not have the same desire to clear cap room. They’ll likely need to attach an asset to Monahan to move him, and if they don’t think they’ll be competitive without Gaudreau in 2022–23, why would they pay up to get rid of Monahan’s cap hit?
If a team is interested in giving up an asset to take a flyer on Monahan, the Flames would probably say yes. If it comes down to the Flames needing to pay to move Monahan, things get more complicated. (More on that here).
It’s hard to say what the future might hold for Monahan. It would be nice to see him get the chance to move on to a team where he can get another chance to play a top-six role. That probably isn’t in the cards with the Flames.