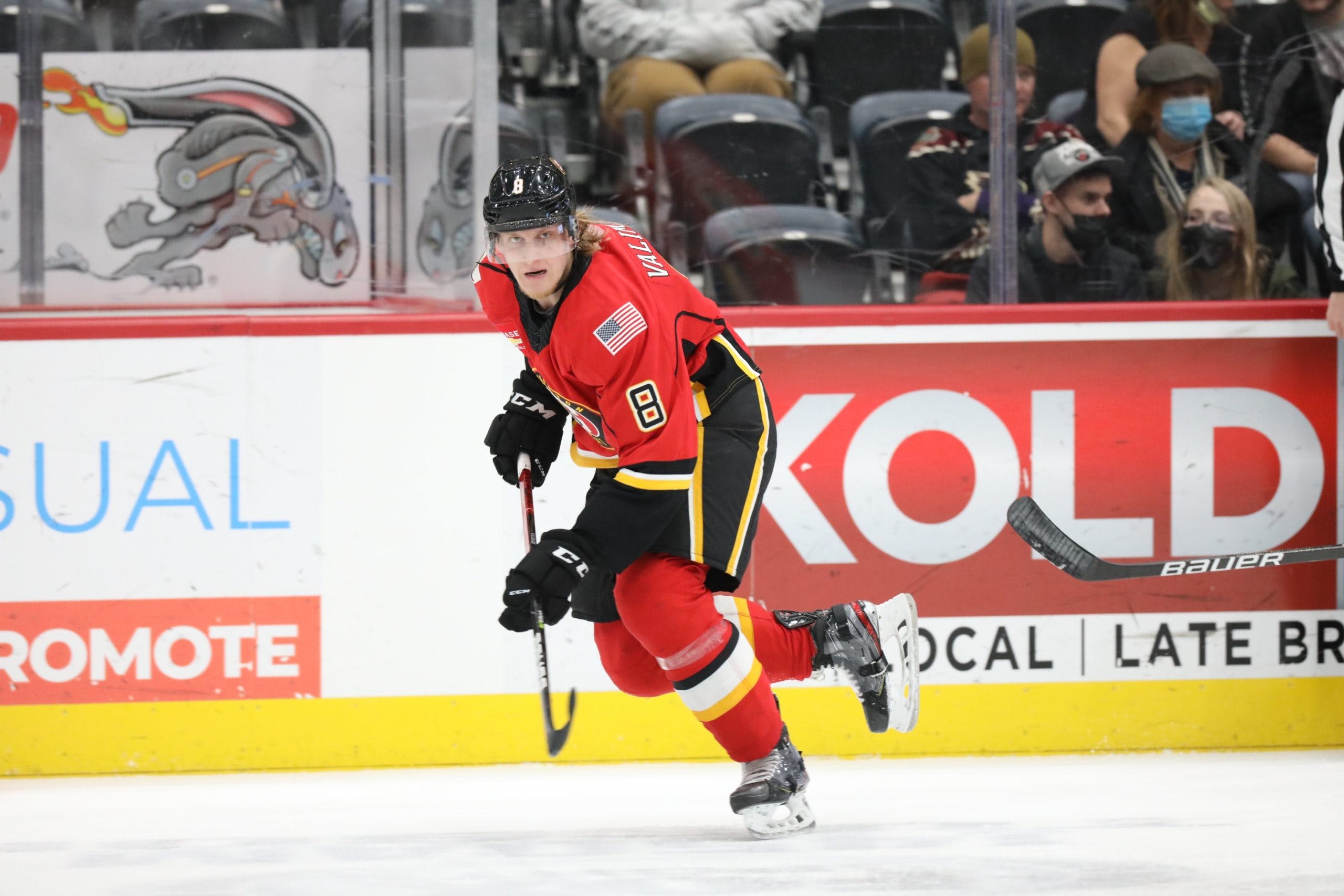 By Mike Gould
10 months ago
On Monday, FlamesNation contributor Pat Steinberg spoke with Stockton Heat head coach Mitch Love on the first-ever afternoon edition of Sportsnet 960 The Fan’s “Flames Talk” show.
Among other topics, Love provided an update on @Juuso Valimaki’s health and also shared some of his insights on red-hot Calgary Flames prospects @Matthew Phillips and @Luke Philp.
You can find the interview here in its full duration. Here are some excerpts:
On @Juuso Valimaki’s status after leaving Sunday’s game against the Ontario Reign with a lower-body injury:

He’s day-to-day right now for us, Pat. Little nicked up, as you mentioned. He seemed to be a little bit better today, in having some conversations with him as we travelled [from Ontario to Henderson]. He’ll see some doctors and our training staff today here, again, and kind of see where he’s at as we move forward throughout the week.

On Valimaki’s performance in his 10 games with Stockton this season:

He’s fit in real nice. You know, he does a lot of good things. He’s a competitive kid, he moves pucks very efficiently out of his own end of the ice, he’s added to our power play. He has the ability to do that and, again, when you’re able to add a guy like that to your roster, especially at a very important position like defence, he’s been a welcome addition to our group.

Only @Jakob Pelletier (31 P in 29 GP) has more points with the Heat this season than @Matthew Phillips (27 P in 26 GP).
On what @Matthew Phillips, Stockton’s leading goal-scorer, provides the Heat on a nightly basis:

This guy — he’s 150 pounds, I couldn’t even tell you how tall he is, I mean — he goes into the hard areas of the rink, he’s so competitive on loose pucks even though his stature isn’t there. It’s hard to sit on that bench or sit behind the players on the bench and watch what he does and not follow suit because he plays the game so hard. His skillset, his creativity, his ability to make plays and people around him better just because he’s so smart and in tune with the game each and every night, he’s a fun player to watch and he’s been very key for our team’s success this year.

On what Phillips needs to improve upon to potentially be an effective player at the NHL level:

It’s hard to say. He makes plays at a high level of speed, he’s not afraid — even though he’s not a very big guy — to go to the hard areas to score and make plays for his linemates. He does a lot of really good things. He’s a smart player, again, he’s a key guy on our special teams. His leadership is outstanding in terms of driving our culture each and every day in practice and in games. I’m just glad — I had to face this guy a lot in junior, coaching against him [as an assistant with the Everett Silvertips] and, man, he was a pain, ’cause he was such an effective hockey player. It’s just really nice to have him on our side, now. […]
I think the biggest thing that sticks out for me is just his hockey sense and his competitiveness. He just plays the game so hard, he’s not afraid of anybody out there, he puts himself in harm’s way. That’s with you or it’s not. That’s something that he brings every day, and our guys recognize that, they follow suit, and, like I mentioned earlier, we’re just really fortunate to have him, he’s been a great leader for our hockey club this year.

On getting team captain @Byron Froese back from the Flames’ taxi squad and into the Heat lineup in time for Stockton’s 5–4 comeback victory over Ontario on Sunday:

It’s huge. Another very important position, we really feel confident with our centre ice depth here. Last night, we had @Glenn Gawdin, @Luke Philp playing centre, Byron, @Connor Zary, so again, we really felt like we could utilize the four lines of our hockey club to hopefully wear down an opponent that played the night previous, and I think that was a little bit of the case in our energy levels in the third period versus theirs. It’s been good, Byron hadn’t played a hockey game since Dec. 7, so it’s been some time since he was in some game action, but he was real strong for us. The importance of his leadership and delivering the right message on the bench and the dressing room between periods, that’s been very key for us to have back.

On the performance of @Luke Philp, a 26-year-old right-shooting centre who, during his third season in the Flames organization, ranks fourth in team scoring with eight goals and 18 points in 27 games:

He plays a quiet game, and that’s not always a bad thing. He’s very responsible defensively, he’s on our power play, he’s one of our key penalty killers up front. He’s a guy who’s been around at this level for a few years, now. He provides that quiet leadership for our group. He’s anywhere between 18 and 22 minutes a night for us. That just comes to show you what kind of trust he has from our coaching staff to put him on the ice and play up and down our lineup and provide us that depth.

The Heat currently sit atop the AHL’s Pacific Division standings with a 21–5–3 record. They’ll play the penultimate game of their current seven-game road trip when they face the Henderson Silver Knights on Jan. 12.
Matthew Phillips photo via the Stockton Heat (@AHLHeat) on Twitter.