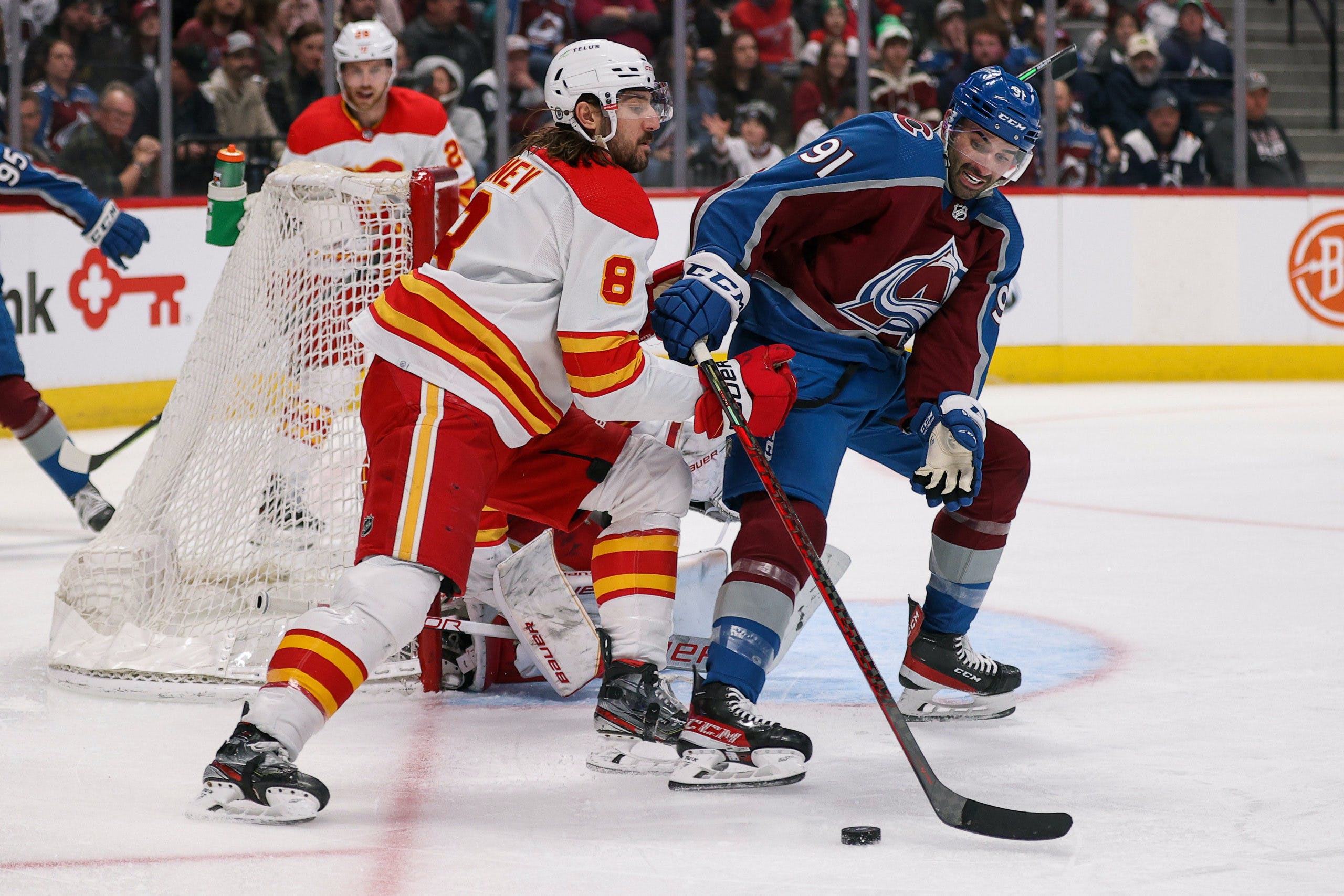 By Robert Munnich
2 months ago
It is going to be difficult for the 2022-23 Calgary Flames to maintain or exceed what the 2021-22 squad was able to accomplish.
Last year’s Flames team had a historic season with a lot of impressive accomplishments which includes:
A lot is going to have to go right once again for the Flames to produce similar results to last season. In order to get there, I have three big questions about the Flames that need to be answered.

1. How long will it take for the team to gain chemistry?

This summer, Brad Treliving made major changes to the core of the Flames. Out are Johnny Gaudreau, Matthew Tkachuk, Sean Monahan, and Erik Gudbranson. Somehow the Flames GM was able to replace them with Jonathan Huberdeau, Nazem Kadri, and MacKenzie Weegar.
The Flames are used to changes to the roster. For example, there was more roster turnover heading into the 2021-22 season than there is head into the 2022-23 season. The big difference between the two is that the core group has changed dramatically this summer whereas last year most of the changes were to the supporting cast. How is that going to impact the chemistry of the team both on and off the ice? How long is it going to take Huberdeau, Kadri and Weegar to get used to playing under a new system? How long will it take to get used to playing for one of the most demanding coaches in the NHL? How long will it taken them to get used to a new city and environment?
It needs to be quick. The Pacific Division is going to be better this season. Edmonton, Vegas, Los Angeles, and Vancouver should all be better next season. The Flames can’t fall behind early in the season like they have in the past.
The Flames also play 9 of their first 10 games on home ice. Taking advantage of that homestand could go a long way in locking down a playoff spot come April.

2. Do the Flames have enough depth to handle injuries?

Last season the Flames lost the least amount of man games to injury in the NHL with 97. Most of those games missed were by fourth line players like Sean Monahan and Brett Ritchie. The Flames will inevitably run into more injury troubles this season. My question is, how will they handle it?
They should be fine in goal. Dan Vladar and Dustin Wolf will be able to hold down the fort if anything happens to Jacob Markstrom this season. Vladar was put in a lot of tough situations last season and did a good job giving the Flames a chance to win in those games. Wolf was named goalie of the year in the AHL in his 20-year-old season.
The Flames should also be able to handle some injuries on the back end better this season than they did last year. Losing Chris Tanev in against the Oilers was a series changer in a negative way. They had to replace Tanev with Michael Stone in the top four and that did not work out. Adding a guy like Weegar makes the Flames blueline deeper than last season. Calgary also has 10 defencemen on one-way contracts: Weegar, Tanev, Noah Hanifin, Rasmus Andersson, Oliver Kylington, Nikita Zadorov, Connor Mackey, Juuso Valimaki, Nicolas Meloche, and Dennis Gilbert. Expect this number to change at some point as the Flames will likely look to move one of these defensemen for a draft pick or another forward.
The forward group is also deeper this season based off slotting. Adding Nazem Kadri to the center group is huge. I don’t think the Flames would have handled losing one of Lindholm or Backlund well last season because of their lack of depth at centre. But with Kadri in the fold you can deal with injuries better than before. The Flames’ younger players should also be able to take a step forward in their development. Guys like Dillon Dube, Jakob Pelletier, and Adam Ruzicka should be able to step in and play solid minutes if there are injuries.
Treliving is not done adding to the forward group. Sounds like they’re still very interested in Evan Rodrigues according to Elliotte Friedman and Greg Wyshynski.

3. What Nazem Kadri and Tyler Toffoli are we going to get?

Pat Steinberg and I have discussed Toffoli in depth recently in a couple different articles for Flames Nation. Check out these two articles for more on Toffoli:

Tyler Toffoli is Calgary’s most intriguing player for 2022-23

Where does Tyler Toffoli fit in the Calgary Flames’ lineup?

Will the Flames get the Toffoli from his first 22 games? Or his last 27?
The same question goes for Nazem Kadri. Will the Flames get the Kadri that scored at a 100 point pace in the 2021-22 season? Or will they get the 50-60 point Kadri from most of his career?
Kadri had a breakout season with a stacked Colorado Avalanche last season. Kadri was so good that he was consistently in the top 5 in NHL scoring until he got hurt late in the season. Is this the new Nazem Kadri? If it is, that’ll be a huge boost to helping Flames offence replace the goals left behind by Gaudreau and Tkachuk.
The crazy thing about last season is that Kadri did not get much of playing time at 5 on 5 with the Avs best forwards. His most common linemates at 5 on 5 were Andre Burakovsky, Val Nichushkin, and Logan O’Connor, not MacKinnon, Rantanen, or Landeskog. Kadri also got a lot of ice time on the Avalanche first power play unit.
Kadri will be put in a similar situation in Calgary as he was in Colorado. He will likely play on the second line with players like Andrew Mangiapane, Blake Coleman, Tyler Toffoli, or Dillon Dube, fairly similar to his old Avalanche linemates at 5 on 5. Kadri will also be a mainstay on the top power play unit with Huberdeau and Lindholm.
It’ll be fascinating to see what Kadri can do next season. I don’t think it’s unrealistic to think he can put up 70-80 points wearing the Flaming C next season.