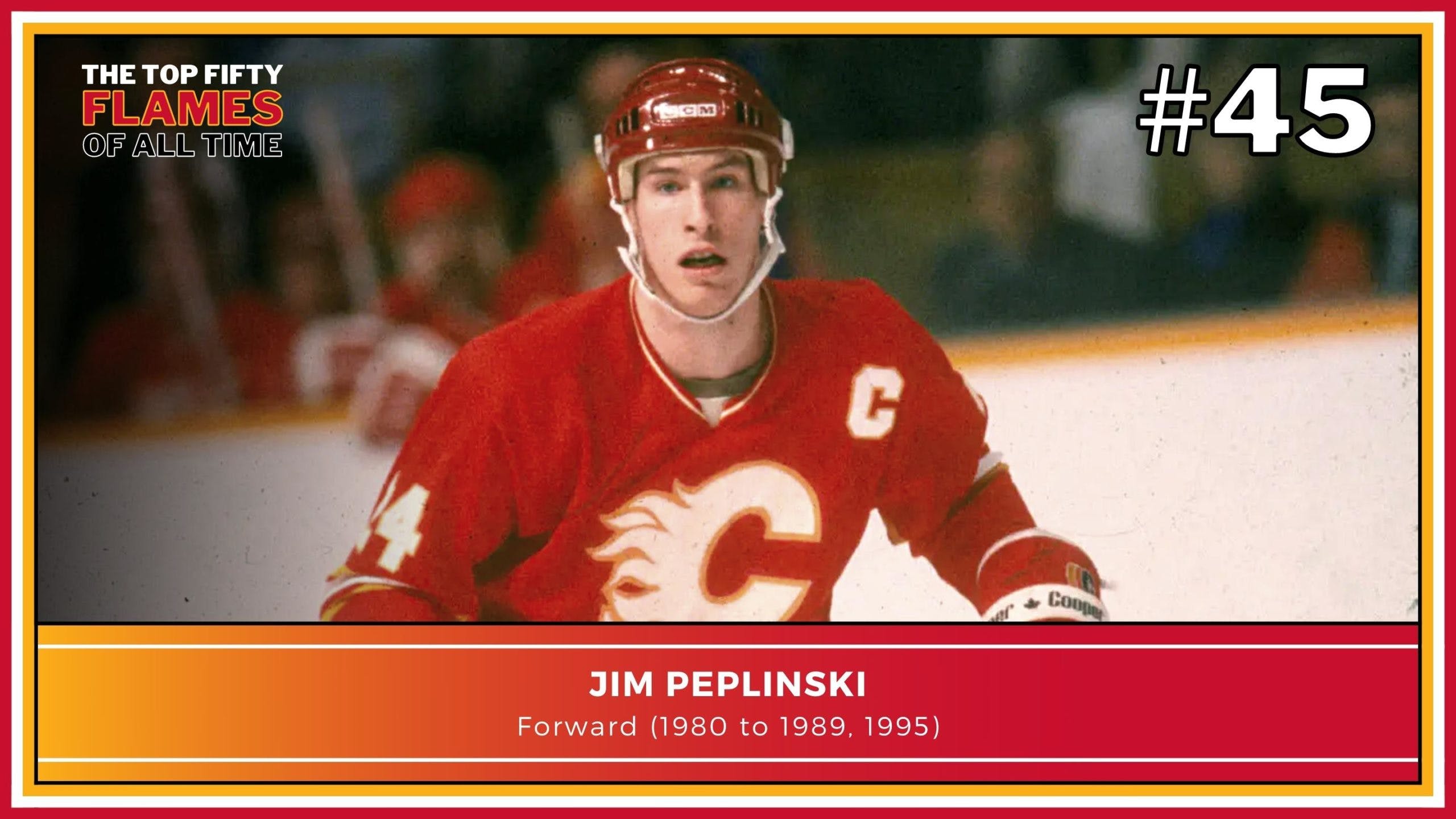 By Ryan Pike
4 months ago
In the history of most National Hockey League franchises, there are a handful of players that don’t seem particularly important outside of that market, but are crucial in terms of the culture and history of that club. For the Calgary Flames, Jim Peplinski is one such player.
Peplinski was a consistently good Flame, but his longevity and leadership capabilities elevated him to importance. He’s #45 on our countdown.
Player, 1980-90, 1994-95; Vice-President Business Development, 2001-present
An Ontario kid originally, Peplinski was selected by Atlanta in fourth round of the 1979 NHL Draft. He went pro in 1980-81, leaping directly from the OMJHL’s Toronto Marlboros to the NHL’s since-relocated Calgary Flames without spending any time in the minors whatsoever.
Peplinski was a bit of an oddity in Flames franchise history, as he was a rough-and-tumble player who (a) never got hurt, (b) managed to score with a good amount of regularity and (c) racked up an impressive penalty minute and fight resume despite not being a traditional heavyweight. He surpassed the 20-goal mark just three times – including a 30-goal outburst in his sophomore season – and he never scored at a point-per-game pace at the NHL level. He did receive Selke Trophy votes in two seasons during the mid-’80s, and he was someone who could play a regular shift against Wayne Gretzky without getting his doors blown off by the Great One.
Despite not being a high-end player, Peplinski became a really important player for the Flames during his tenure. He fought, frequently against the Edmonton Oilers. While he didn’t score a huge amount of goals, he scored a slew of really key goals at key moments. He contributed in the community, working frequently with the Big Brothers program and the Special Olympics, eventually receiving the NHL’s Charlie Conacher Humanitarian Award (the precursor to the King Clancy Memorial Award). He played for Canada at the 1988 Calgary Olympics. He served as Flames co-captain from 1984 to 1989, and was actually a healthy scratch in the Cup-clinching sixth game of the 1989 Cup Final (opening up a lineup slot for Lanny McDonald).
Peplinski retired initially early in the 1989-90 season, but he returned briefly in the 1994-95 campaign before retiring for good. After a few years building his business empire in the Calgary area, he joined the Flames as their VP of business development in 2001. He remains a part of the Flames in that respect, as well as being a very visible part of the club’s alumni.
Peplinski wasn’t necessarily the greatest Flame in terms of his on-ice accomplishments, but he was a good player, and in many ways he embodied what the Flames and their fans wanted their players to be on and off the ice.