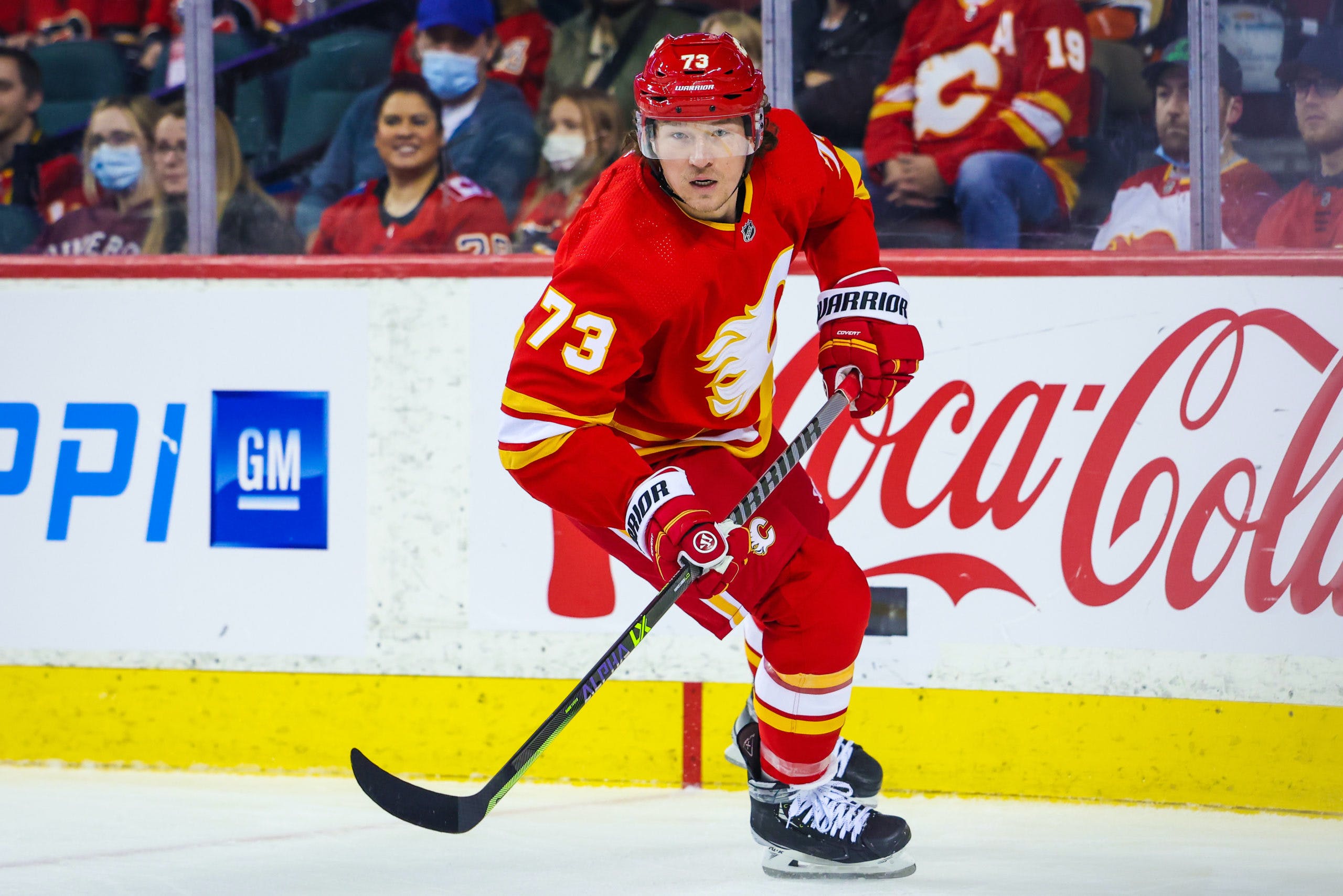 By Mike Gould
9 months ago
The newest member of the Calgary Flames made his presence felt in the first period of Saturday’s nationally-televised game against the Minnesota Wild.
@Tyler Toffoli tickled the twine and added an assist as the Flames tallied three unanswered goals to close out the opening frame. With his two-point outburst, Toffoli now has three goals and an assist in six games with the Flames.
@Frederick Gaudreau opened the scoring for Minnesota just 1:36 into regulation, putting the Flames into a 1–0 hole. Calgary also surrendered the first goal against the Vancouver Canucks on Thursday and proceeded to give up six more in a 7–1 loss.
This time, the Flames were the next team to strike — and it was a former Canuck doing the damage. With less than 10 minutes remaining in the period, Toffoli streaked down the right side of the offensive zone and received a perfect pass from @Rasmus Andersson (himself selected with a draft pick that originally belonged to the Canucks).
Toffoli cushioned Andersson’s pass for only a moment before slinging the puck past Wild goaltender @Kaapo Kahkonen. @Noah Hanifin also assisted on Toffoli’s 12th goal of the season.
The Flames took their first lead of the hockey game just 1:20 after Toffoli’s goal, and the 2014 Stanley Cup champion once again figured in on the scoring play.
With Wild forward @Brandon Duhaime serving a holding penalty, the Flames successfully managed to set up in the offensive zone. Toffoli picked up the puck at the left point before finding @Elias Lindholm in the slot; the Swedish centre directed the puck toward @Matthew Tkachuk, who banged it past Kahkonen for his 25th goal of the season.
Tkachuk’s goal came in his 400th National Hockey League game and gave the Flames a 2–1 lead at the 11:49 mark of the period.
@Erik Gudbranson also scored for the Flames in the opening frame. Calgary outshot Minnesota by an 18–4 count in the first 20 minutes of play.
Toffoli became a Flame by way of a mid-season trade with the Montreal Canadiens on Feb. 14. Calgary sent Montreal a package including forward @Tyler Pitlick and a conditional 2022 first-round pick to acquire Toffoli.
The Flames currently lead the Wild by the same 3–1 score early in the second period of Saturday’s game, which is being broadcast on CBC as part of Hockey Night in Canada.