What Tyler Toffoli brings to the Calgary Flames 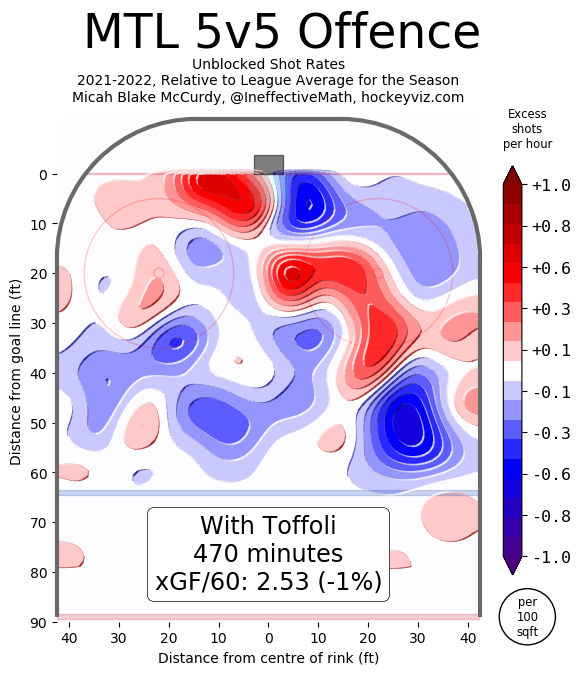 By Shane Stevenson
11 months ago
On Monday, the Calgary Flames made a trade with the Montreal Canadiens to acquire forward Tyler Toffoli.
Everything the Flames sent away is included in Elliotte’s tweet, and Toffoli was the only piece sent back from Montreal. No salary was retained from either side, the draft picks are from 2022 (first) and 2023 (fifth), and the 1st round pick is top 10 protected. It would take a monumental in-season collapse for the Flames for the pick protection to really mean anything significant. Now the logistics are out of the way – lets take a look at how Toffoli has played the last few years and project what we can expect from him during his stay in Calgary. 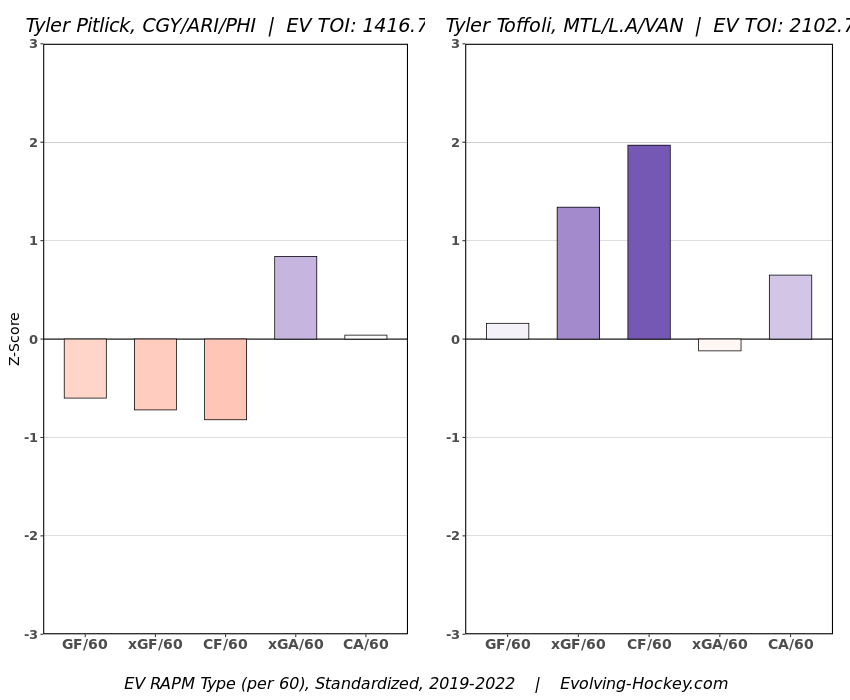 We start with a direct comparison to the player Toffoli is replacing on the roster. If you read my piece on the JT Miller rumour then you can have a bit more knowledge on being able to read the charts and heatmaps I’m going to share in this piece as well. Offensively the two sections we want to focus on are GF/60 and xGF/60. GF/60 are actual goals put in relative to the leagues replacement level while xGF/60 is the stat that captures the creation of the opportunities. Calgary just got a full 2 standard deviations of offensive creation added to their lineup, and I’m not too worried about his defensive impact (more on that later). 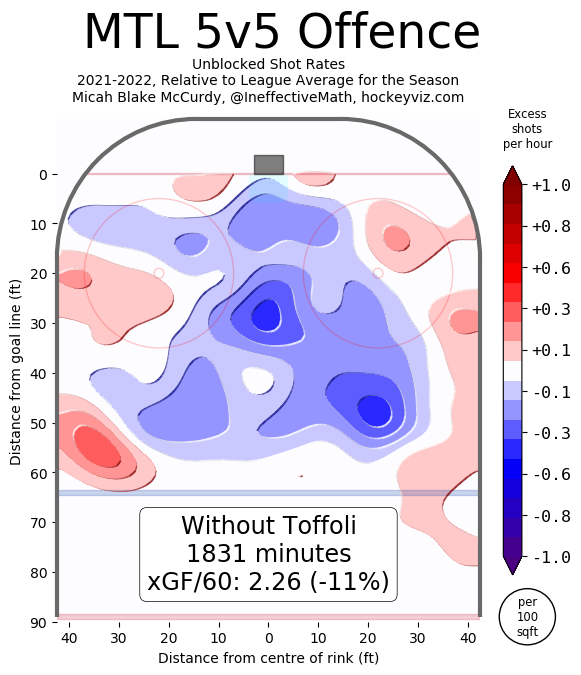 Looking at just this year it would be acceptable to understand Toffoli’s numbers may take a hit due to the current state of the Canadiens. As we can clearly see that without Toffoli Montreal can’t create anything – at all. Toffoli has a knack to drive the net from the right side of the ice in an eerily similar manner to Mangiapane. He prioritizes shot opportunities from the dangerous are of the ice, which is great because that’s what this year’s version of Calgary has been doing since the puck dropped in October. Now these impact charts are team effects, but lets look at his isolated impact next to Mangiapane’s. 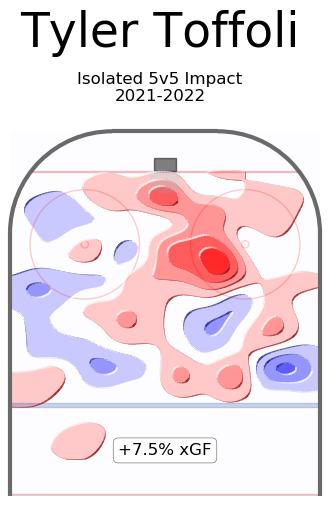 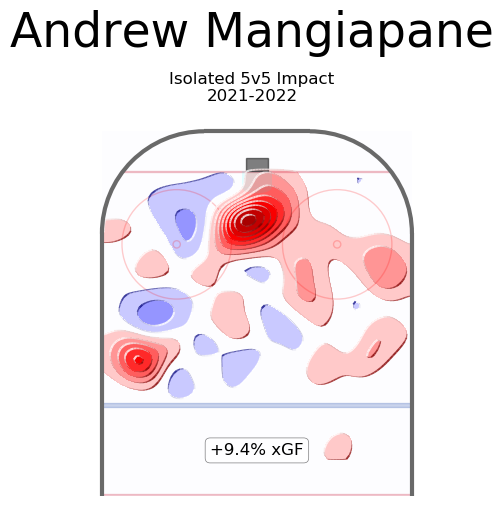 Two guys that love creating chaos around the oppositions net. These are their individual contributions to offence when they are on the ice taking teammates out of it. Toffoli was able to get to this level of positive impact this year on a lacklustre team that is spiralling in the basement of the standings – coming to a team with a clear identity in Calgary (one he will be extremely familiar with) will only help him find more offence. This year he only has 9 goals to date and is still finishing above replacement level. Lets look at how he was able to finish off chances last year on the team that were able to make the cup final. Lots of red around the net, deep red too which indicates a heavier volume of attempts. Also positive was the fact that he outscored his expected creation on all 4 classifications of shots. Toffoli is going to be able to be a piece that can be plugged into the top 6, spreading more talent down to the Flames’ third and fourth lines, and making them a whole lot better today. Calgary needed one thing badly – a right shooting player that can score goals at a great rate, Tyler Toffoli fits that mould. As usual there are two sides to the puck, lets gander at his defensive play next.

The one thing from the RAPM (regularly adjusted plus-minus) chart is that over the last three season Toffoli has had a slightly below replacement in defensive impact (xGA/60), so lets find out why. The first thing I can notice is the fact that when he showed up in Montreal his impact fell – especially in and around the net – in terms of defending shot attempts. It was unusual for him because when you look at all his years with the Kings and the deadline stint with the Canucks he largely was an incredibly consistent defensive player. I would be comfortable enough to state that the problems with his defence were more a product of the team/coaching rather than the player himself. 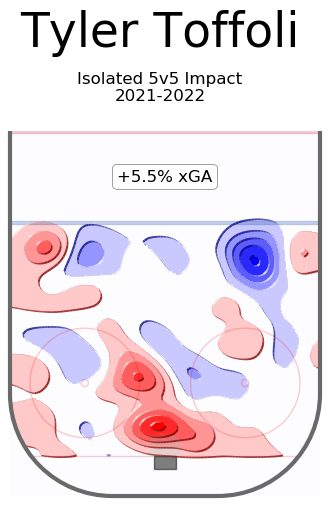 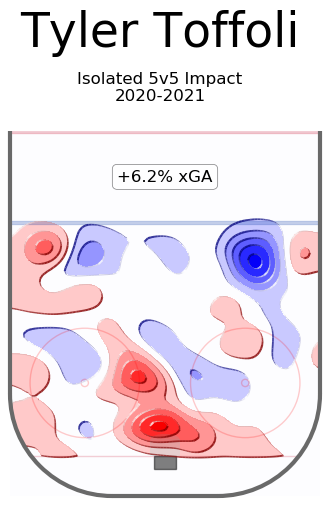 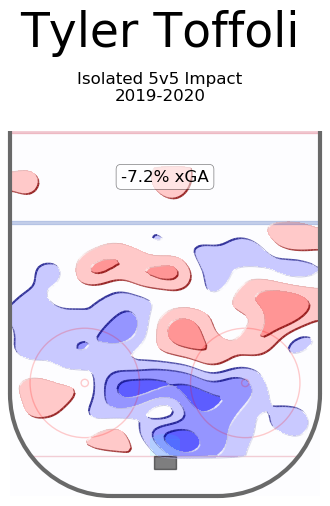 The blue is more what we can expect in Calgary than the red filled charts in Montreal. By no means is it a slam-dunk statement but it is one I don’t really feel hesitant to say. Calgary has had their blueline be one of the most efficient in terms of defending high-danger chances and even if they do get beat they have the great wall of Sweden stopping everything on most nights. Toffoli isn’t going to be seeing the best shutdown forwards consistently – the Gaudreau line will get those – and will be playing with some combination of Backlund, Coleman, Mangiapane, or possibly Dubé. He knows the style of possessive checking hockey the coach is going to want, just may take him a fair bit of time to get up to the same speed Calgary wants to play vs whatever it is Montreal is trying to do.
One final thing i want to touch on with Toffoli that was semi-rebuffed in terms of JT Miller is Toffoli’s corsi-impacts. Both the CF/60 and CA/60 being well above the replacement line says to me that Toffoli dominates the chance share. He isn’t shy to get the puck on net at a rate way higher than his opposition. Maintaining such high numbers on such a bad team catches my eye. Everything we know about Calgary and how they’ve played this year this would translate in a positive manner as well. There’s good evidence to suggest that even these numbers can be on the rise.

The fact Calgary didn’t touch the active roster – at least players that have played recently – is a huge win itself. Add in the benefits that Toffoli has history with over half of the dressing room and he should be welcomed in seamlessly. Pitlick did have the skillset to be an everyday fourth line player but was frequently asked to find success in a top 9 role. The task ended up being too much for him while Trevor Lewis snagged the everyday fourth line RW spot. Toffoli most likely takes Brett Ritchie out of the everyday lineup creating the possibility of 3 dangerous scoring lines for Calgary. The first round pick was always going to be in play as well, so getting a player with a cap hit like Toffoli (the term is nice too) using that pick was yet another welcome situation.
Next years cap situation does become slightly more complicated by this, but that is something for them to worry about after they try and win the Stanley Cup – and make no mistakes this trade on paper makes Calgary significantly more dangerous going forward. A scary thought seeing as they were playing dangerous enough without him.