Who got better and who got worse in the Western Conference? 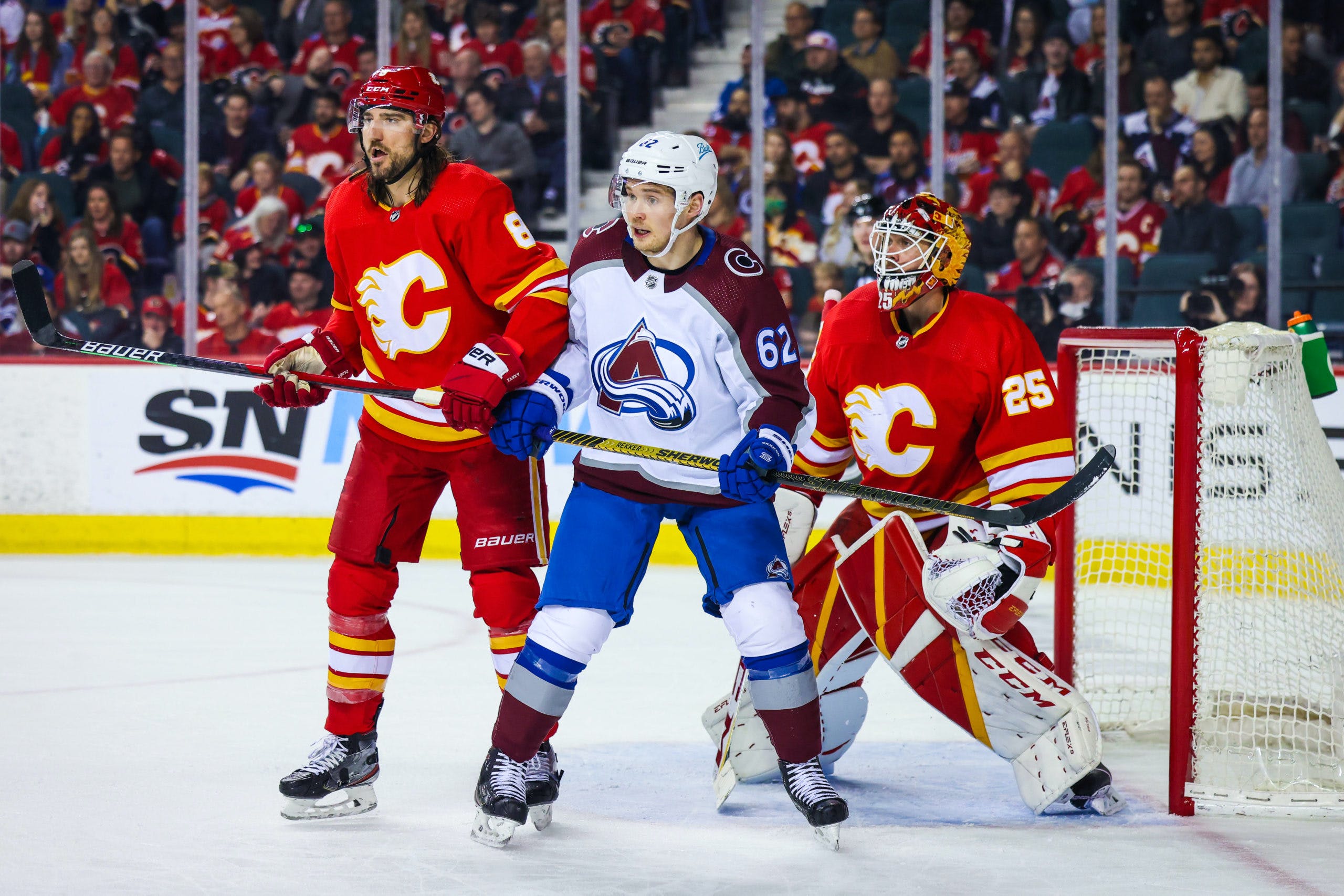 By Robert Munnich
5 months ago
To say this has been the craziest off-season in Calgary Flames franchise history would be the understatement of the year. Unbelievably, the Flames are a better team on paper right now then they were last year after losing their two best skaters and 100 point players in Matthew Tkachuk and Johnny Gaudreau. Now is the time for Brad Treliving and the Flames to push their chips to the middle of the table and go all in as the Western Conference is up for grabs.
Lets take a look at the off-season for each contending team in the Western Conference and see who got better, who got worse, and how the Flames stack up against them.

In: Kevin Fiala (F)
Out: Dustin Brown (F), Troy Stetcher (D), Olli Maatta (D), Andreas Athanasiou (F)
The Kings are going to be a sneaky good team in the Western Conference in the 2022-23 season. They brought in electrifying, point per game forward Kevin Fiala which is the type of speed and skill they needed to add to their already deep forward group.
Los Angeles should also see some development and improvement from the likes of Quinton Byfield, Arthur Kaliyev, Sean Durzi, Gabe Valardi, and Alex Turcotte to name a few.
On top of all that they will have two of their best defencemen, Drew Doughty and Sean Walker returning to the lineup from major injuries.
The only question around the Kings is about Jonathan Quick who is turning 37 in January. Can he still carry the load as the Kings number one goalie?

In: Jack Campbell (G), Mattias Janmark (F), Greg McKegg (F)
Out: Duncan Keith (D), Zack Kassian (F), Josh Archibald (F), Mikko Koskinen (G)
The Edmonton Oilers are still a team that should be feared in the Western Conference. They are essentially bringing back the same team that beat the Flames in five games of the second round. One reason for optimism is the fact that they still have a lot of young players on their roster who should take another step in their development next season such as Ryan McLeod, Kailer Yamamoto, Jesse Puljujarvi, Evan Bouchard, and Philip Broberg. They should also get more stable goaltending from Jack Campbell and Stuart Skinner.
The one big departure is future Hall of Fame defenceman, Duncan Keith. That is going to hurt the Oilers as their blueline is by far the weakest position group on their team.
(Projected Oilers defense pairings as of Aug. 23, 2022)
Is that a defence core that can lead you to a Stanley Cup? The Pittsburgh Penguins were able to win the Stanley Cup in 2017 with a less than stellar blueline. Anything is possible. But that is more of the exception than the rule.

In: Alex Georgiev (G), Brad Hunt (D)
Out: Darcy Kuemper (G), Nazem Kadri (F), Andre Burakovsky (F), Jack Johnson (D), Nic Aube-Kubel (F), Nico Sturm (F)
The Stanley Cup champion Avalanche have got significantly worse over the course of the off-season. That is normally what happens to championship level teams. Their pending unrestricted free agents are at their peak value as they are now labelled champions which NHL general managers love.
Colorado’s biggest loss was goaltender, Darcy Kuemper.  Kuemper was one of the best goalies in the second half of the regular season. Since Jan. 1, 2022, Kuemper ranked second in save percentage (0.928%), sixth in goals against average (2.43) and second in goals saved above average (27.73). Their new 1A goaltender, Alex Georgiev did not come close to performing near the level Kuemper did.
(From Jan. 1-Apr. 30, 2022. Ranking among 48 goalies who played over 1,000 minutes)
Colorado is still considered a favorite in the Western Conference heading into next season. They still have the elite talent in Nathan Mackinnon, Mikko Rantanen, Gabe Landeskog, Cale Makar, Devon Toews and Bowen Byram. But make no mistake about it, this is not the same Avalanche team. Their depth at forward and goaltending has set them back.

In: Matthew Highmore (F), Josh Leivo (F), Noel Acciari (F), Thomas Greiss (G)
Out: David Perron (F), Ville Husso (G)
The Blues had an offensive explosion last season with nine 20+ goal scorers in the regular season, the most in the NHL on one team. They’re still a team that will make the playoffs and be considered a contender, but they’re not as good as they were last season.
They lost two key players in the off-season, David Perron and Ville Husso. Perron, almost a point per game producer over the last three seasons, was an important player on and off the ice for the Blues. They will miss his skill, tenacity, and leadership this season.
The big question for me is the Blues goaltending situation and Jordan Binnington. The Blues don’t have the security blanket of Ville Husso anymore if Binnington’s play falls off. Thomas Greiss is not a guy who can carry the load for an extended period at this point of his career. What happens if Binnington goes on along stretch of below average play? How will the Blues handle that without Husso?

In: Filip Gustavsson (G), Nic Petan (F)
Out: Kevin Fiala (F), Cam Talbot (F), Nic Deslauriers (F)
We are now starting to see the affects of the Zach Parise and Ryan Suter 2022-23 $12,743,588 buy out. They lost their second most dynamic forward, Kevin Fiala via trade to the Los Angeles Kings. Fiala played in all 82 games and scored 85 points. The Wild are going to have to rely on Matt Boldy and rookie Marco Rossi to make up for the lost offence.
Goaltending is an issue for the Wild. They are going to have to rely on a 38-year-old Marc-Andre Fleury and AHL goaltender Filip Gustavsson. The Wild did not do a good job handling their relationship with former goaltender Cam Talbot. The lack of communication and playoff action hurt relations between the two parties. He would have been a great 1B goalie for Minnesota. Instead they go with Gustavsson who only has 27 games of NHL experience.

In: Michael Hutchinson (G)
Out: Robin Lehner (G) (Injury), Max Pacioretty (F), Evgenii Dadonov (F), Mattias Janmark (F), Dylan Coghlan (D)
This has been an ugly off-season for the Vegas Golden Knights. They lost two scoring forwards in trades for absolutely nothing in return. They just lost Robin Lehner for the season as he is getting surgery on his injured hip.
The one thing you can point to for a reason that the Knights will be better in 2022-23 is the fact they will go into the season, aside from Lehner, healthy. Golden Knight players Jack Eichel, Mark Stone, Nic Hague, Reilly Smith, Alec Martinez, Zach Whitecloud, and William Karlsson all missed significant time to injury last season. Having them back in the lineup and hopefully playing a full season will be massive for the Golden Knights. But can they truly compete in the West with Logan Thompson and Michael Hutchinson as their goalie tandem?
Now is a great time for the Flames to go all in for a Stanley Cup. The Western Conference is wide open. Four out of the six contending teams in the west have got worse over the summer.
Calgary has the best goaltending in the west, the best coach, the second-best defence core behind the Avalanche, and a forward group that features Elias Lindholm, Nazem Kadri and Mikael Backlund down the middle. This is the best chance to win a Stanley Cup on paper heading into a season since the 1980s or early 1990s.
Buckle up, Flames fans. The next two years should be fun.