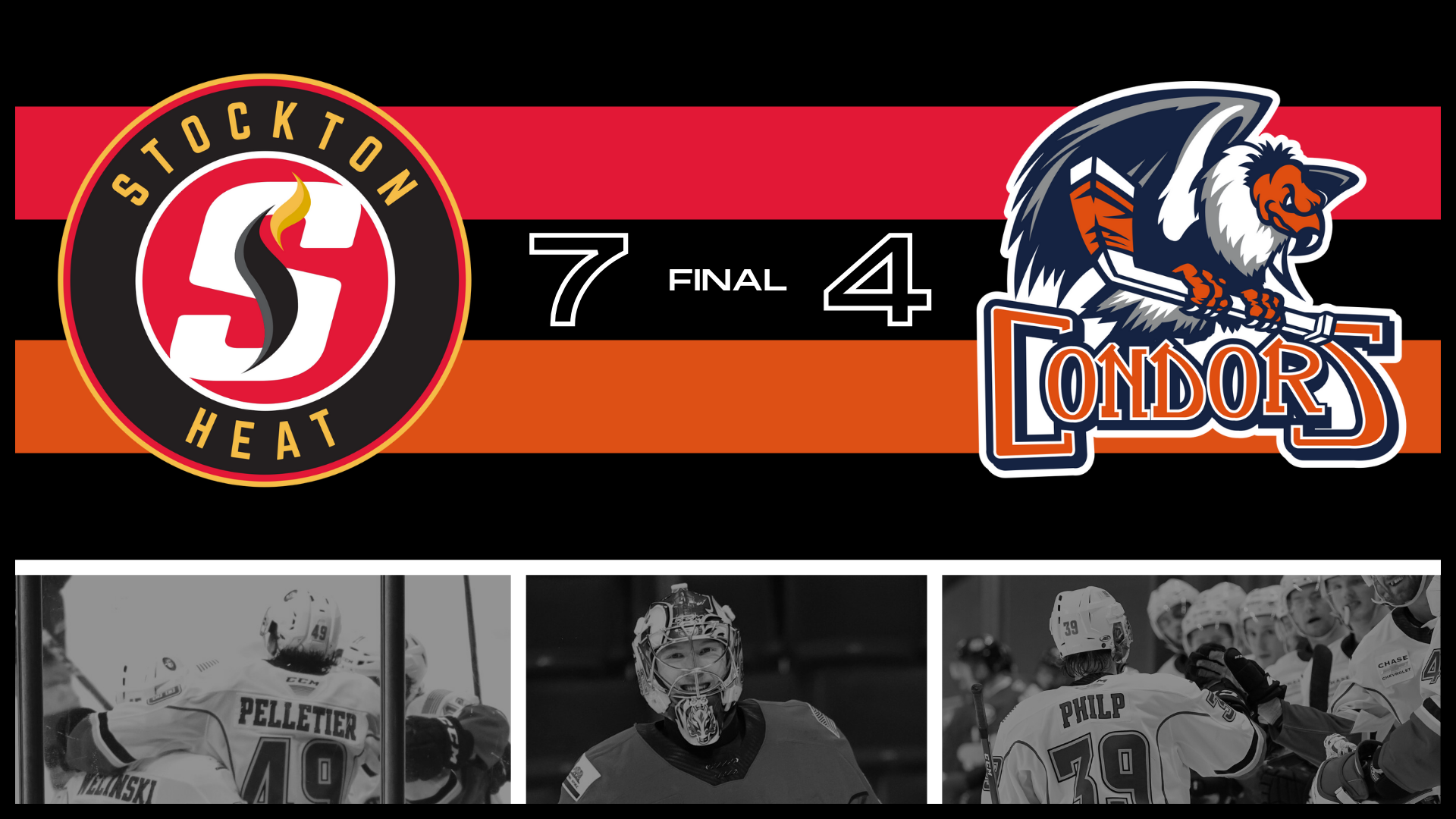 Photo credit: Graphic by Mike Gould
By Mike Gould
9 months ago
Comments
Despite being outshot 40–22, the Stockton Heat managed to defeat the Bakersfield Condors at Stockton Arena by a 7–4 score on Sunday evening.
Heat goaltender @Dustin Wolf held the fort at his end of the rink, stopping 36 shots for his league-leading 21st win of the season. The 20-year-old rookie now has a .926 save percentage in 27 appearances this year to go along with his 21–3–3 record.
@Matthew Phillips drove the bus for the home side with four points (one goal, three assists), ultimately becoming the all-time leading scorer in Stockton Heat history. The 23-year-old winger leads the Heat with 19 goals and 43 points in 38 games this season.

@Luke Philp and @Justin Kirkland each scored twice for the Heat, with Phillips, @Connor Zary, and @Emilio Pettersen also finding the back of the net.
Advertisement
Ad
Advertisement
Ad
Zary added an assist for just his second multi-point game of 2021–22. The 20-year-old centre has four points in his last three contests and is now up to 13 points (five goals, eight assists) in 29 games this season.
That’s not bad for a player who has primarily operated as a depth centre in Stockton after missing much of the Calgary Flames’ training camp (and the first few weeks of the AHL season) with a foot injury.

More like Connor Scary (when he gets going), right guys? pic.twitter.com/HwGEmlEqUh

Philp and Kirkland both had outstanding games on Zary’s wing, combining for nine shots and four goals (Kirkland, however, took three minor penalties).
Both Kirkland and Philp are set to become Group 6 unrestricted free agents at the end of this season and will be free to sign with any other NHL team if they can’t come to agreements with the Flames. Furthermore, both players are making their respective cases to receive legitimate auditions in Calgary.
Advertisement
Ad
Advertisement
Ad
Philp, 26, is a versatile right-handed centre who can play on both special teams and line up on the wing. The University of Alberta alumnus currently ranks fourth on the Heat with 27 points in 39 games and is tied with @Jakob Pelletier for second in goals (with 15 each, the pair rank behind only Phillips).
No Heat player has more goals over the last three seasons than Philp’s 42. He can shoot the puck as well as anyone on the team, and he put his wicked wrister on display to score the game-winning goal during the second period of Sunday’s contest.

Kirkland is a very under-the-radar prospect in Calgary’s system. Signed away from the Nashville Predators as a non-tendered RFA back in 2019, Kirkland scored just eight goals in 69 games over his first two seasons with the Heat.
Advertisement
Ad
Advertisement
Ad
In 39 games with the team in 2021–22, Kirkland already has 14 goals and 24 points. Even during the pandemic-shortened 2020–21 campaign, Kirkland showed flashes of being able to victimize goaltenders with his lethal one-timer; however, the 25-year-old has really taken his shot to the next level this season.
While Philp stands 5’10” and weighs 185 pounds, Kirkland is a 6’3″, 205-pound power forward. There’s a chance both Philp and Kirkland might be able to carve out niches as bottom-six NHL role players in the coming seasons. Both players are currently under contract on one-year deals worth the NHL minimum of $750,000.

Kirkland goal No. 1. Yes, he has more than one in less than half a period. pic.twitter.com/J1UuxbQUk2

@Brad Malone, Yanni Kaldis, @Adam Cracknell, and @Dino Kambeitz scored for the Condors on Thursday, with Kambeitz’s goal coming with just 14 seconds remaining in regulation time during a Bakersfield power play.
Advertisement
Ad
Advertisement
Ad
With the victory, Stockton improved to 29–8–4 on the season and maintained its position atop the AHL standings (sorted by points percentage). Bakersfield fell to 20–12–8, good for third place in the Pacific Division. Stockton is now a perfect 5–0–0 against the Condors this season.
The Heat now have 27 games remaining on their 2021–22 regular-season schedule. They’ll return to action on Feb. 25 to kick off a two-game road swing against the 21–16–4 Abbotsford Canucks.

Make it three in the last four for 46. pic.twitter.com/HQPWivlclM

Matthew Phillips then scored 54 seconds later to put us up 2-1. pic.twitter.com/d2PbUlr5l3