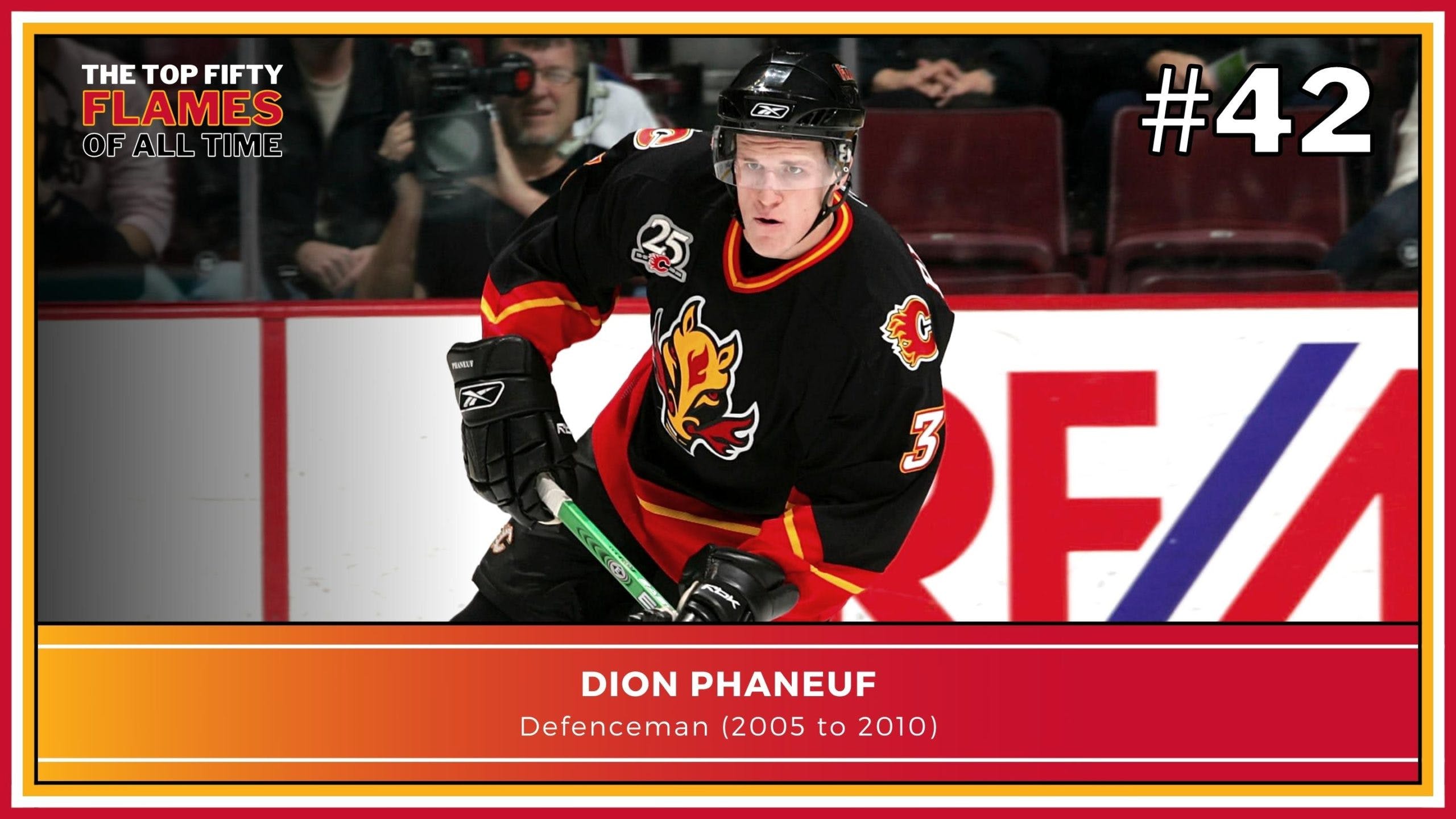 In hockey, as in life, sometimes people aren’t meant to be around forever. Some players are only around for a good time, not a long time. But some short-term Flames made a big impression during their time with the franchise.

#42 on our list is a first-round pick who contended for the Calder and Norris trophies, then headed out of town: Dion Phaneuf.

Even when he was playing in major junior, Phaneuf felt like a Flame. He was a big-bodied blueliner from Edmonton who crashed, banged and was a pain in the backside for opponents in all three zones. He was willing to throw big Denis Gauthier-style hits, but he was smart enough to pick his spots and also generate a ton of offence in his role, too.

When Darryl Sutter drafted Phaneuf at 9th overall in the 2003 NHL Draft, analysts and fans alike went “Yeah, that feels about right.” It just so happens that Phaneuf played his junior hockey 90 minutes up the road from the Saddledome with the Red Deer Rebels, and was coached by Darryl’s brother Brent, too. He fit the Flames’ needs like a glove.

Phaneuf’s NHL debut was delayed by a season due to the 2004-05 NHL lockout, so his freshman season was met with a ton of anticipation. Debuting at the same time as Sidney Crosby and Alex Ovechkin, Phaneuf wasn’t quite as seismic an addition for the Flames as those guys were, but he was really, really good right away. He finished third in Calder Trophy balloting (landing on the All-Rookie Team) and managed to finish 8th in Norris voting, too.

Phaneuf’s next two seasons saw him continue his upward progression. He finished 6th in Norris voting in his second season (2006-07), and he erupted for 60 points in 2007-08 en route to finishing 2nd in Norris voting and being named to the year-end First All-Star Team. He was signed to a brand-new contract and was named an alternate captain prior to the 2008-09 season.

The sky seemed like the limit. A season and a half later, Phaneuf was traded to Toronto in a seven player deal that’s best remembered on the Calgary side for bringing Matt Stajan to town. The trade came during a prolonged Flames slump, and seemed aimed to shake up a Flames locker room that evidently needed one. (Phaneuf’s play had declined a bit, too, and perhaps the Flames were aiming to cash out before his value declined further.) Unfortunately, it didn’t have the desired effect, and by the end of 2010 Sutter resigned as general manager.

Phaneuf may not be fondly remembered by Flames fans for how his tenure ended – and probably the sour taste is more because of the lack of trade return for him, all due respect to Stajan. But for the short time that he was a Flame, especially the first three seasons of his tenure, Phaneuf was fantastic, and his 2007-08 campaign is one of the best 82-game stretches a blueliner has ever had wearing a Flaming C.