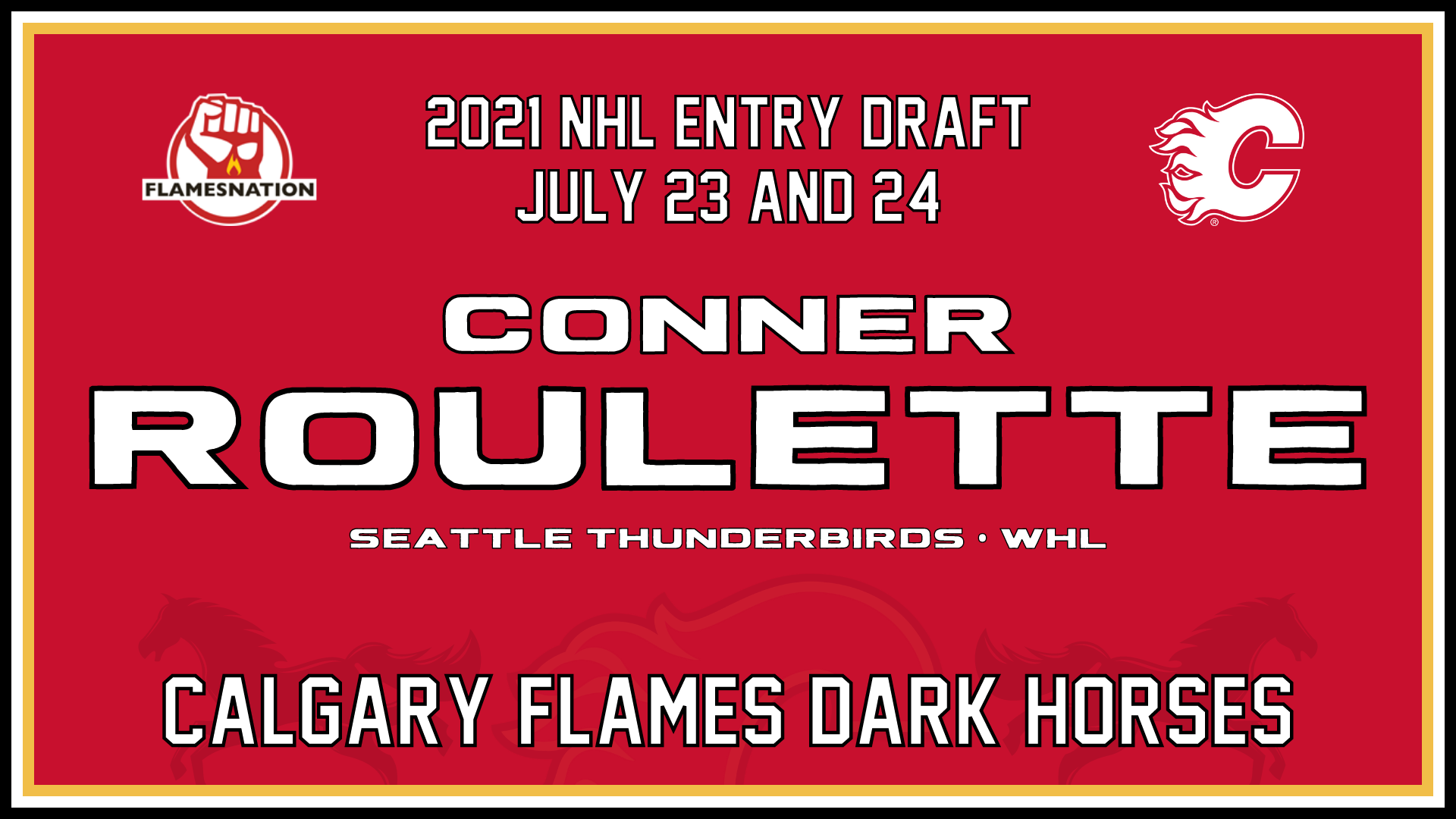 By Mike Gould
1 year ago
Rounds two through seven of the 2021 NHL Entry Draft will take place on July 24, 2021. The Calgary Flames currently possess a total of six picks in those rounds, having acquired the Edmonton Oilers’ third-round selection before trading their own fourth to the Los Angeles Kings. In this “Draft Dark Horses” series, our team of writers will evaluate some of the notable prospects projected to be available in the later rounds of the draft.
Conner Roulette is a highly productive young forward projected by various analysts to be selected anywhere between the second and fourth rounds of the upcoming NHL Entry Draft. Here’s the low-down on this potential future Flame.

Standing 5’11” and weighing 180 pounds, Roulette is a well-built and versatile player who primarily lined up at left wing over the last two seasons for the Seattle Thunderbirds of the Western Hockey League. He’s also capable of playing centre.
Roulette is a skilled, intelligent forward with an excellent shot. His biggest issue is his skating, which lacks explosiveness and top-end speed. He makes up for his average pace with his terrific hands and finishing ability.
Future Considerations’ draft guide (buy it here) describes Roulette as a player with “a quality shot and some manipulative skill” but whose lack of agility could hurt his draft stock.

His creativity and ability to read play are strong, but he drives plays through his hands and it’s a placeholder ability that will limit him unless he intends on making a career of showing up in soft ice and out-thinking everyone. His offpuck game is quite strong and he blends quite well, trying to hide between checks as much as possible, but feels he must cheat to get space to create. His skating is noticeably a detrimental area of his game, as he lacks explosiveness and stride recovery. He is laboured in his acceleration and poses little threat when attacking with possession on the rush.

McKeen’s Magazine is generally more optimistic about Roulette’s future, with contributor Arlo Schulz lauding him (behind a paywall) as a “fantastic finisher” with “excellent” puck skills. Nevertheless, Schulz also identified Roulette’s skating as his greatest area for growth.

Conner Roulette is a skilled winger with plenty of offensive ability. He is a creative finisher with a good shot and anticipates the play well. He suffers from being less than the sum of his parts, as he struggles to multitask and put his skillset together at top speed. He lacks explosiveness and is separated from the puck too easily at times and requires linemates to do the heavy lifting. He projects as a middle-six winger who can be an asset on the powerplay, but will need to improve his skating and learn to execute at a faster tempo in order to play at the pro level, when time and space is at a premium.

Roulette had a fantastic 2019–20 season with the Thunderbirds. As a 16-year-old, he scored 19 goals and added 20 assists in 39 games; only two players — both 19-year-olds — on those 24-32-7 Thunderbirds finished ahead of the rookie on the team’s scoring leaderboard.
Among WHL players in their draft-minus-one seasons, Roulette found himself in excellent company. His 16 even-strength goals in 2019–20 ranked third among WHL players of his age, with only Logan Stankoven (22) and Dylan Guenther (18) tallying more.
Roulette also finished just one even-strength primary point behind Stankoven, scoring 30 to the Kamloops forward’s 31 (Dylan Guenther led all 16-year-old WHL players with 35).
With Roulette on the ice at even-strength, the 2019–20 Thunderbirds outscored their opposition by a 44-30 margin (according to Pick224). Without him, Seattle scored just 73 goals and allowed 108.
Roulette represented Canada for the first time in his career at the 2019 U-17 World Hockey Championship in Medicine Hat, scoring two goals in four games. A year later, Roulette made Canada’s roster at the 2020 IIHF U-18 World Championships and scored five points (two goals, three assists) in seven contests.
Following a brief stint in the Manitoba Junior Hockey League, Roulette returned to the Thunderbirds for the pandemic-shortened 2020–21 season. He played 11 games in his second go-round with Seattle, scoring six goals and 12 points while averaging an estimated 16:50. According to Pick224, Roulette ranked second among first-year draft-eligible WHLers (min. 10 GP) with 3.24 primary points-per-60 in 2020–21.

Roulette is a superb producer at the WHL level who has earned his way onto two separate Team Canada squads. His junior production over the last two seasons trails only that of projected first-round picks Dylan Guenther and Logan Stankoven among 2021-eligible WHL players.
Calgary’s prospect pool is relatively shallow down the middle. In Roulette, the Flames could add one of the most intriguing scoring forwards in this draft class for the price of a middle-round draft pick. Roulette has been projected by various analysts to go anywhere from the top half of the second round to the bottom of the fourth.
McKeen’s Hockey — 64th
Future Considerations — 113th
TSN (Bob McKenzie) — 39th
The Athletic (Corey Pronman) — 71st
The Athletic (Scott Wheeler) — 51st
Recruit Scouting — 55th
NHL Central Scouting (North American Skaters) — 36th
Elite Prospects — 93rd
Smaht Scouting — 78th
The Flames have two third-round picks this year. If they’re looking for a talented forward in that vicinity, their best bet might be to put Roulette in red.