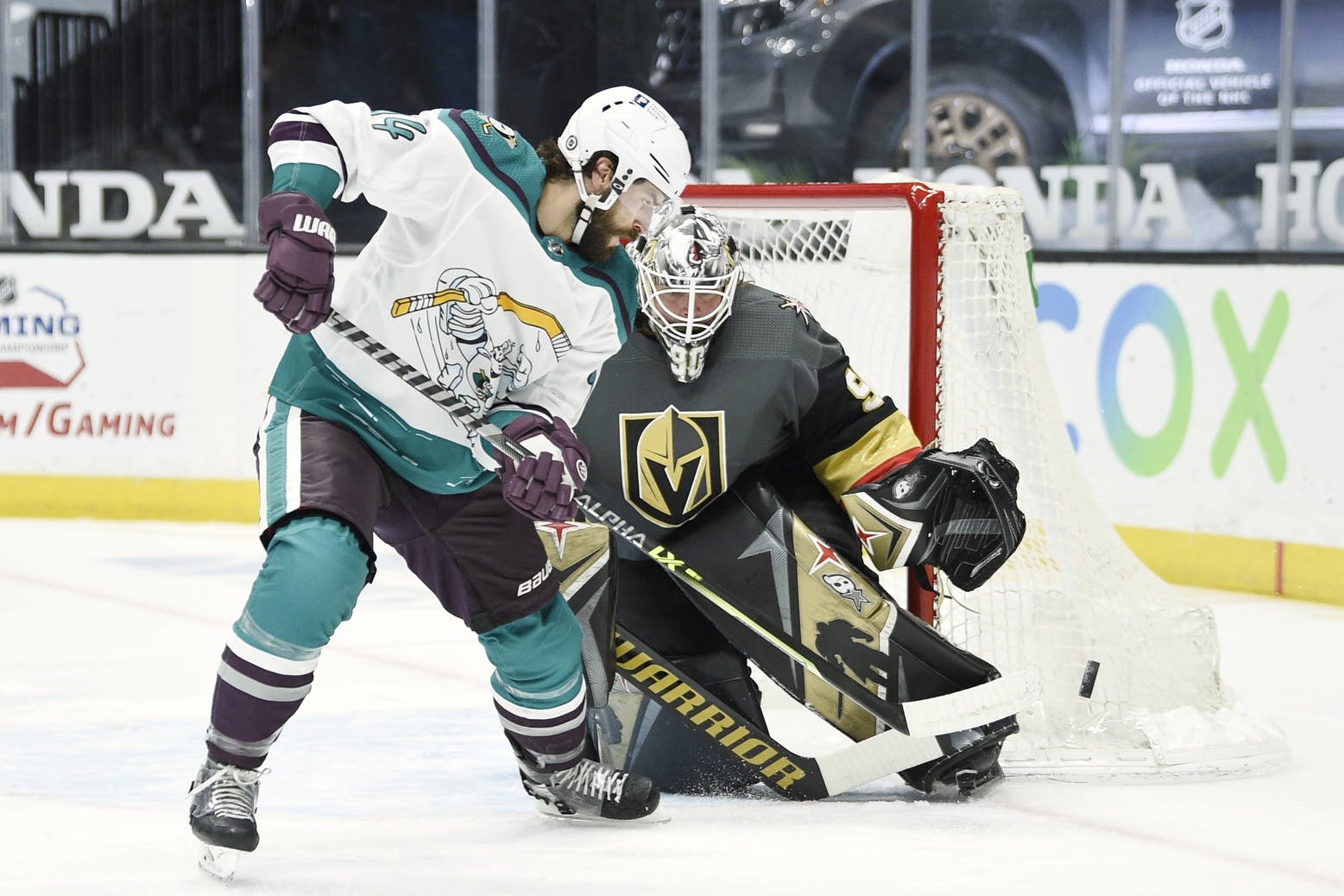 By Mike Gould
1 year ago
Welcome back to FlamesNation’s 2021 Flames Trade Targets series, in which our team of writers takes a look at some of the players around the league either in need of a change of scenery or rumoured to be on the market.
30 teams passed on the opportunity to add Adam Henrique for free in the 2020–21 season.
The Anaheim Ducks waived Henrique in February after a slow start which saw him score just four points (three goals, one assist) in his first 16 games of the season.
After clearing waivers, Henrique remained with the Ducks and scored 17 points (nine goals, eight assists) in his final 29 games. That’s akin to a 25-goal and 48-point pace over a full season.
Henrique led the 2019–20 edition of the Ducks with 26 goals and 43 points in 71 games. The year prior, he scored 42 points (18 goals, 24 assists) in a full 82-game campaign.
During his tenures with the Ducks and the New Jersey Devils, Henrique has been a reliable goal-scoring centre and has reached 50 points three times. He tallied 30 goals with New Jersey in 2015–16 and has scored at least 20 times in five of his last seven seasons (excluding the shortened 2020–21 year, in which he scored 12 goals in 45 games: a 22-goal pace).
Over the last two seasons, Henrique has scored 1.13 goals per 60 minutes. That figure ranks 24th in the NHL among players with more than 30 games played in that span (one spot behind Andrew Mangiapane).
Henrique has been a productive offensive forward for the vast majority of his career and looks to have rebounded after his early struggles in 2020–21.
According to Evolving-Hockey, Henrique provided the Ducks with 8.4 offensive expected goals above replacement (xGAR) at even strength last year. No other Anaheim forward came close to Henrique’s effectiveness at driving play in the offensive zone at full strength. For comparison’s sake, Max Comtois played 10 more games than Henrique and accumulated 0.4 fewer offensive xGAR at even strength in 2020–21.
Henrique remains a strong shooter and converted at a 15.6% rate in 2020–21, only a shade above his career average of 15.4%. He averaged 6.11 shots/60 at 5-on-5 and his 0.58 individual expected goals/60 ranked eighth on the Ducks (behind Rickard Rakell, David Backes, Comtois, Danton Heinen, Max Jones, Nic Deslauriers, and Trevor Zegras).
A selection of Adam Henrique’s play-driving figures with the Anaheim Ducks (data from Natural Stat Trick, all 5v5)
Note: In the second-last column, a positive number indicates the Ducks had better offensive results with Henrique on the ice than without him. In the last column on the right, a negative number indicates the Ducks allowed fewer chances with Henrique on the ice than without him.
More of Adam Henrique’s play-driving figures with the Anaheim Ducks (data from Hockey-Reference and NST)
All but three of Henrique’s 21 points in the 2020–21 season came at even strength. He averaged 1:48 of power play time per game but mustered just one goal and one assist.
The Ducks remained largely as effective at generating opportunities with Henrique on the man-advantage as they were without him but failed to convert at a regular rate. They scored just five power play goals in 45 games with Henrique on the ice, allowing three in that span.
That’s right: Anaheim posted a plus-two goal-differential on the power play in Henrique’s 81 minutes of ice time.
For reference, the Ducks outscored their opponents by a 13-to-1 margin in power play situations with Henrique on the ice in 2019–20. That figure improved to 23-to-3 in 2018–19. The Ducks just stopped clicking, for some reason, during Henrique’s man-advantage shifts in 2020-21 — and it likely cost him more than a few points.
Anaheim still controlled over 85% of the expected goals and nearly 88% of the shot attempts with Henrique on the ice with the extra skater; they shot at a miserable 5.95% rate during his power play shifts and the Ducks’ goaltenders posted an .800 save percentage.
Henrique could easily experience a big-time bounce-back on the power play in 2021–22. His even-strength production remained strong in 2020–21, with his 1.05 goals/60 at 5-on-5 ranking in a tie for 58th in the NHL (among players with >15 GP). Andrew Mangiapane (1.24 goals/60 at 5-on-5, 22nd) was the only Flame to score at a more efficient rate in 2020–21.
Adam Henrique’s scoring efficiency with the Anaheim Ducks (data from NST)
The Ducks have already made Henrique available on the waiver wire and look to be embracing a rebuild. A product of Brantford, Ontario, Henrique turned 31 in February and has three years remaining on a deal paying him an average of $5.825 million per season.
Nobody jumped at the opportunity to add Henrique at his full salary last season. General managers’ appetites might change if the Ducks were willing to retain 50% of Henrique’s cap hit and make him available at $2.91 million for the next three years. (Henrique submits a 10-team no-trade list each year).
Most recently, Henrique captained Team Canada to a gold medal at the 2021 World Championships. Playing on a line with Mangiapane for the final leg of the tournament, Henrique scored six goals and 11 points in 10 games. Nevertheless, the World Championships often create good storylines but rarely serve as relevant indicators for or against future NHL success.
Henrique is a good shooter who scored at a fantastic rate in 5-on-5 play during the 2020–21 season. He’s a five-time 20-goal scorer who looks to be a buy-low candidate this offseason. With some salary retention, he could be an attractive cost-controlled piece for a retooling team.
It would be a risk, particularly with Henrique having three years left on his deal and being on the wrong side of 30. That said, the Flames desperately need more skilled finishers and Henrique has shown to be a very consistent offensive play-driver during his entire tenure with the Ducks.
At his full price tag, Henrique offers marginal value and should likely be avoided. At a discount? He could be a gem.