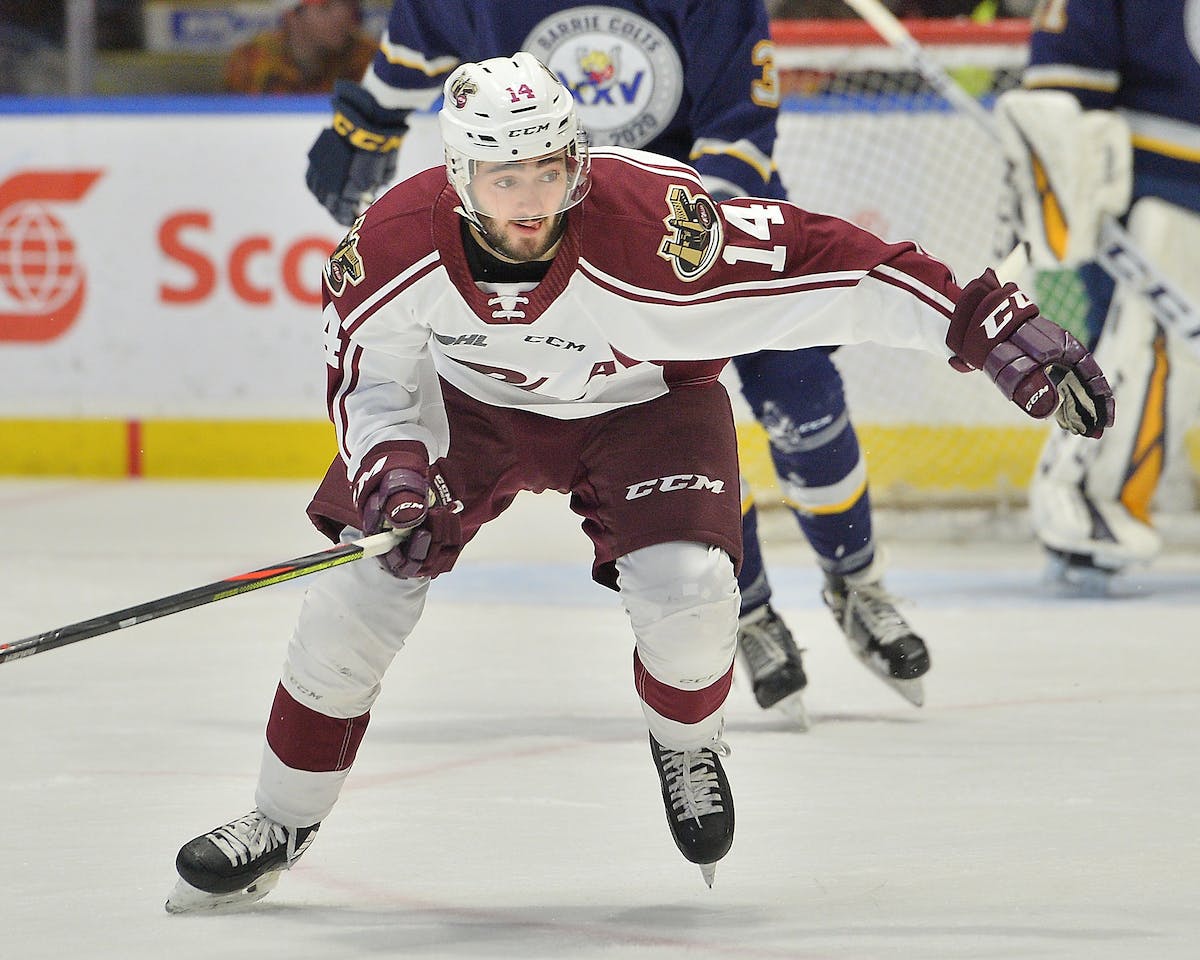 By Mike Gould
1 year ago
Welcome back to FlamesNation’s 2021 Flames Trade Targets series, in which our team of writers takes a look at some of the players around the league either in need of a change of scenery or rumoured to be on the market.
The Arizona Coyotes have granted unsigned prospect Liam Kirk the opportunity to speak with other teams, Sportsnet’s Elliotte Friedman reported in Tuesday’s edition of 31 Thoughts.

Arizona’s given permission for teams to talk to Liam Kirk, who just had a terrific World Championships for Great Britain. The Coyotes have his rights for another year, so a trade needs to be worked out. But Kirk can talk to other clubs.

Kirk, 21, was the Coyotes’ seventh round pick (189th overall) in the 2018 NHL Entry Draft. The 6’1″, 187-pound left wing became the first English-trained player ever to be selected by an NHL team.
After spending his formative years playing for various English teams in Sheffield, Kirk debuted with the OHL’s Peterborough Petes in 2018–19 and scored 47 points in 63 games. His 26 goals ranked behind only Christopher Paquette and Nick Robertson for third on the team.
Kirk returned to the Petes in 2019–20 for his 19-year-old season and took another step, scoring 21 goals and 50 points in just 47 games. Among OHL players in their draft-plus-two seasons, Kirk compared respectably to the likes of Semyon Der-Arguchintsev, Riley Damiani, and Liam Foudy.
Statistics from the draft-plus-two seasons of a selection of OHL players in 2019–20 (data from Pick224)
Foudy was the Columbus Blue Jackets’ first-round pick in 2018. Damiani played his first season with the Texas Stars in 2020–21, scoring 36 points in 36 games and being named the AHL’s Rookie of the Year. Der-Arguchintsev was a third-round pick of the Toronto Maple Leafs in 2018 and scored four points in his first six AHL games this year.
Kirk missed the chance to build off his promising sophomore effort when the OHL cancelled its 2020–21 season. He returned overseas and skated in 12 games for Hanhals IF of HockeyEttan, Sweden’s third-tier league. Kirk scored 10 points (five goals and five assists) with Hanhals.
Subsequently, Kirk returned to the Sheffield Steelers of the Elite Ice Hockey League in England. He finished sixth in the EIHL with 20 points (10 goals, 10 assists) in 14 games; his 1.43 points-per-game pace ranked fourth in the league. Kirk had—by far—the best season of any U-24 EIHL player despite only having turned 21 in January.
Kirk represented Great Britain at the 2021 IIHF World Championship in Riga, Latvia, tying with Andrew Mangiapane for the tournament lead with seven goals in seven games.
He added two assists en route to Great Britain’s 14th-place finish and was named to the tournament all-star team.
Kirk was originally a late draft pick who has shown varying degrees of promise in different leagues in the three years since his selection in the seventh round. He’s a big winger with a good shot who possesses a strong desire to eventually make the jump to the NHL.
In 2020, Brock Otten described Kirk’s OHL performance in a profile for McKeen’s Magazine (paywall):

A talented offensive player, Kirk remains a bit of an enigma due to a lack of strength on the puck. He possesses a strong wrist shot and the scoring instincts to be a top six forward, however he is not able to consistently fight through traffic in order to be a go-to offensive threat. He also battled through some injuries this year (concussion, facial fractures from taking a puck up high, but not related to the concussion).
Drafted as a project, Kirk remains very much so. However, he possesses the talent to one day be an NHL forward if Arizona is willing to remain patient.

The Coyotes have yet to sign Kirk and, if Tuesday’s news is of any indication, are looking to move him instead of pursuing a contract. Arizona’s exclusive rights to Kirk expire on June 1, 2022; until then, they are free to trade him.
Calgary’s pool of futures remains relatively shallow. Kirk could be an attractive piece to target for the right price, whether that be a late draft pick or a depth prospect.