Beyond the Boxscore: Flames sneak away with hang-on victory over Carolina 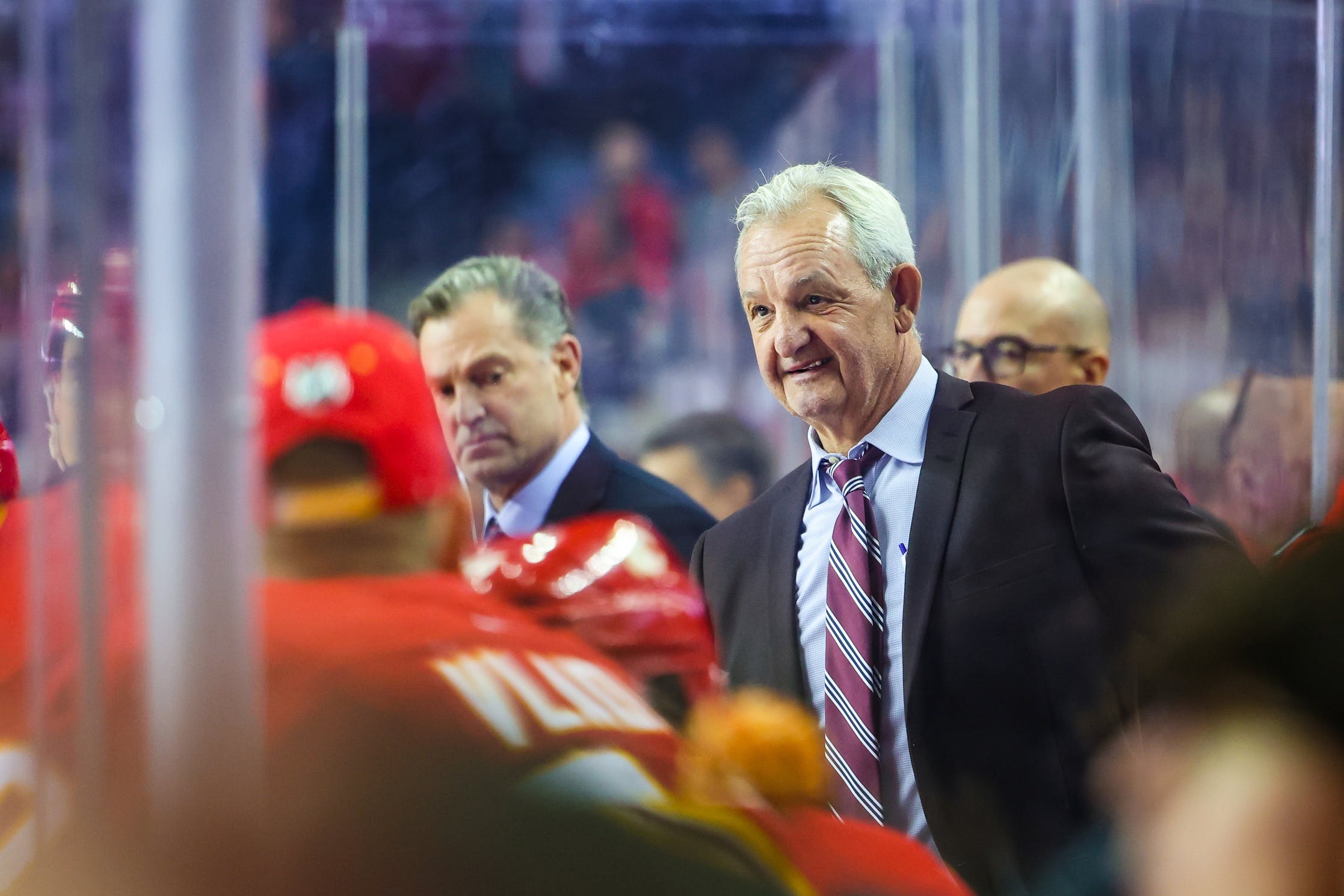 By Shane Stevenson
3 months ago
Scraping by on the pads of their goaltender the Calgary Flames stole the extra point from the Carolina Hurricanes in overtime. All game long the Hurricanes drove the slot with aggression and intensity. Defenders were often okay at clearing loose pucks after – but that is all because of the strong play of the goaltender. The Flames themselves didn’t find too many shifts with sustained offensive pressure while also struggling to transition effectively through the neutral zone. Not the game you show later as an inherently positive example.
CF% – 31.95%, SCF% – 16.64%, HDCF% – 6.29%, xGF% – 16.08%
It’s a Team Game – If this game were to get played over 100 times, I would wager the Hurricanes win 80 of those matches. Calgary mustered up 1 high danger chance at 5v5 the entire game and they got it in the first period. Good for them to be aggressive on their power play because they were getting nothing significant at 5v5. They had an xGF% of 9.66% in the first period and 8.8% in the third period – and they won. This game is unforgiving sometimes.
Corsi King – Last year this never happened, but in game 5 of 2022-23 the Flames didn’t have a single player above 50%. In raw data they had two, but when adjusted for score and venue they fall below the threshold. Chris Tanev (49.31 CF%) and Dillon Dubé (46.98%) were closest to the passing ratio. They were also the only two above 45%. Not the story of a game where Calgary had the puck a lot.
Corsi Clown – Milan Lucic (14.71 CF%) had some hustle in his game in this one. He was constantly on the Hurricanes on the forecheck, but they are a team that moves the puck with pace and can defend against it well. Noah Hanifin (21.57%) and Rasmus Andersson (24.66%) had another game stuck in their own zone. The defence largely seemed to play better in this one, the problem stemmed from the neutral zone passing and the Hurricanes ability to turn a dump-in back into an attack almost immediately. Plenty of turnovers to clean up for Calgary in the middle zone.
Under Pressure – 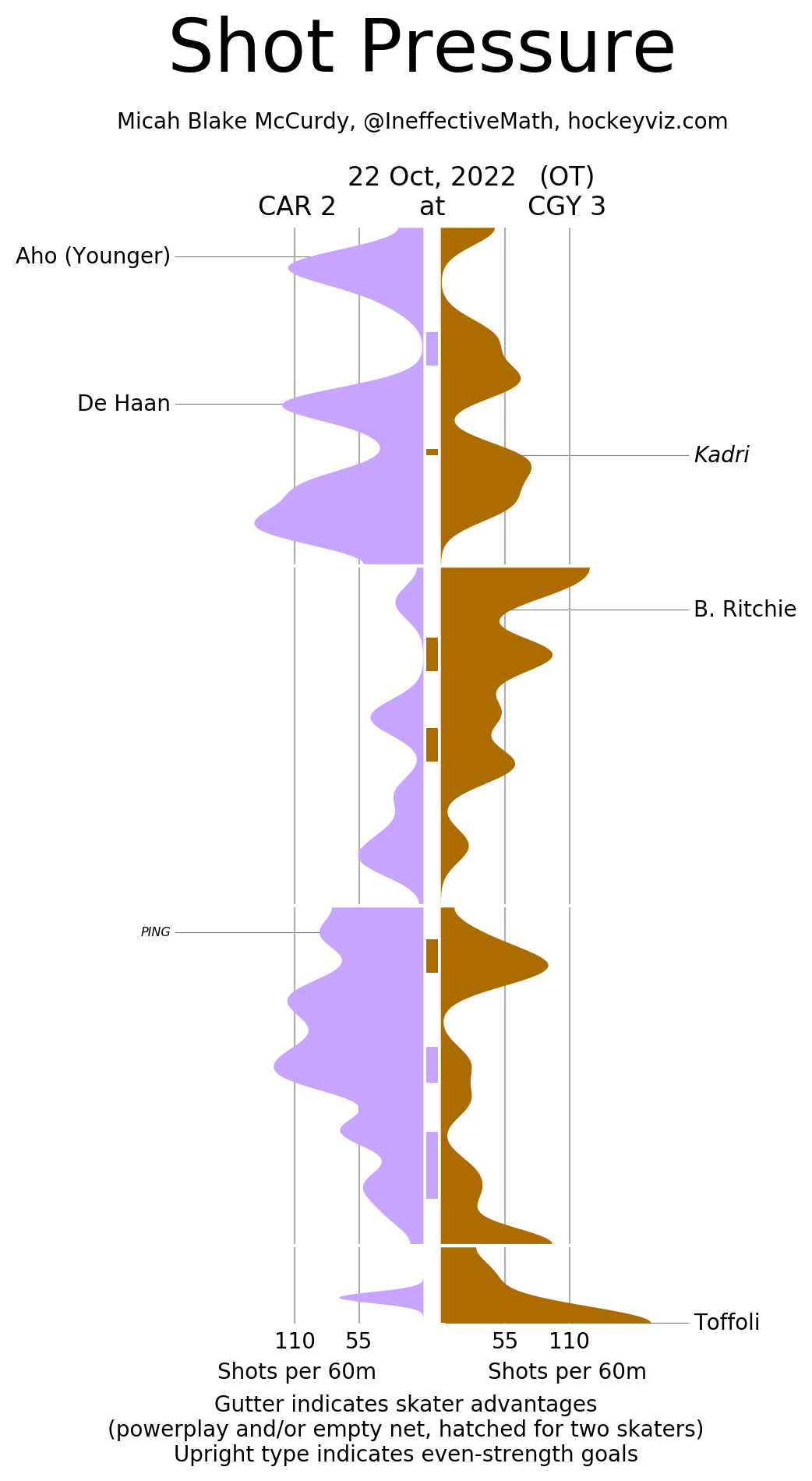 Take the danger classifications out of this and it still just isn’t pretty. Carolina out swarmed the Flames multiple times and still didn’t cash in the second point.
Taken By Chance – This Is the single worst post-game scorecard in high danger chance ratios I’ve seen in doing 4 years of games. No questions about it – the Flames have been severely lacking in their attack the last two games.  To be quite frank it’s been two complete games of no slot defence and hardly any dangerous 5v5 attempts. The Flames of the first three games were mighty impressive – that gameplay is still in this roster.
xG Breakdown – 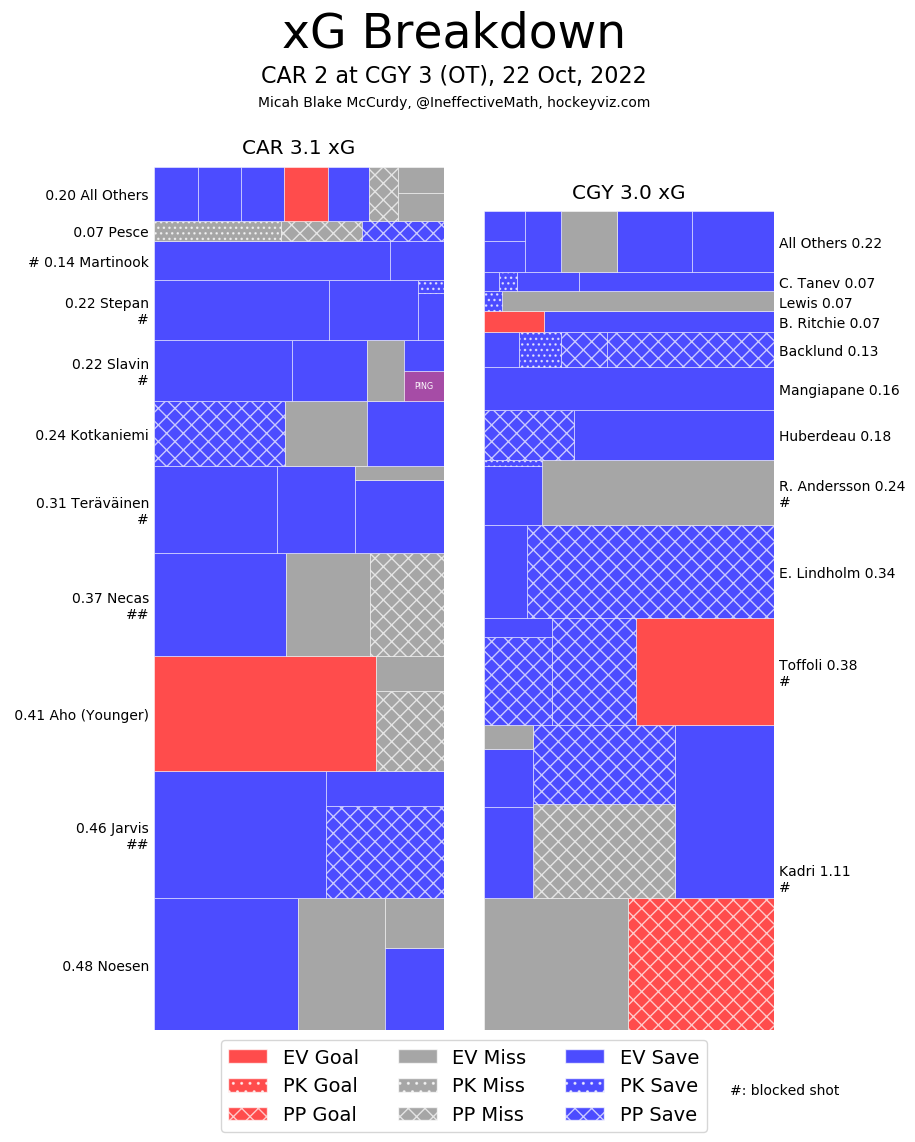 Today’s game highlighted that even when things aren’t really coming up Calgary’s way – Nazem Kadri is still out there fighting. That mentality is going to spread throughout the entire lineup like it already has with Dillon Dubé. Mangiapane has always had that too – it makes that trio so dangerous as a combination.
xGF% – Normally I put players names in here and highlight who did good and who did bad. Everyone rated below 50% in this game with 4 players having less than 10% of the quality of opportunities when on the ice. The two players with the highest numbers across the board were MacKenzie Weegar (46.70 xGF%) and Chris Tanev (44.31%). The two points accumulated are a gift for the Flames who will try to get on track before the high scoring Penguins come to town.
Game Flow –

2 full expected goals in the direction of the Hurricanes favour. The Carolina managers have got to feel like they just got robbed – because they did.
Game Score –
Shot Heatmap – 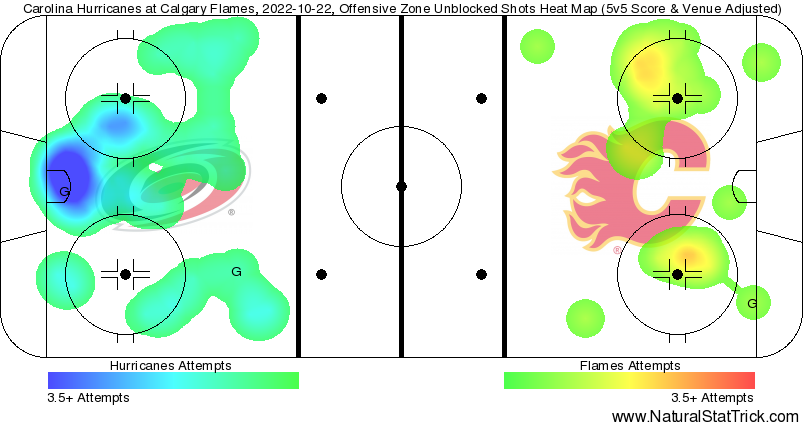 Bad in the offensive zone and worse in the defensive zone. If you showed this to people with the logos and goals removed and asked them to pick who won the game – who do you think they would choose? Buffalo subjected Calgary to the same shot pressure and location.
In The Crease – 2.44 expected goals against at 5v5 with one high danger and one medium danger goal getting by Markstrom. This game does not end up a Flames win without his strong play, period. Hard to defend a clearcut breakaway from Sebastian Aho who zipped right past the Flames defence. As for the de Haan goal – someone on the ice has to win a puck battle. They highlighted it on Hockey Night in Canada, but it happened on more than just that one shift. Calgary got stuck chasing in their own zone a tonne. Markstrom being up to the challenge when they needed it most – their number one.
Today’s Specials – Nazem Kadri plays with urgency all the time and it is the best part of the Flames power play so far. He tries to win every puck race and battle like his job is on the line. As a bumper Kadri never completely stands still which helps open up more passing lanes. On his goal he had the know how to come up towards the blue line as a pass option – when the pass doesn’t come, he immediately turns and drives through the middle getting the rebound. That goal was huge for the two points because the 5v5 play struggled.
I kind of ran out space in one paragraph to mention the fantastic penalty killing. Aggressive and methodical the Flames swarm their competition in waves of pressure. Weird to say being the team shorthanded but it’s working great for Calgary. There are a lot of players with great defensive instincts and reputations, and it shows up on nights like this.
Player Spotlight – Chris Tanev – The Hurricanes have a few defenders that can pick the puck up seamlessly on a dump-in and transition it back the other way with the snap of your fingers. Calgary has one of those guys too – but it’s not the guys you think its Tanev. Play in the defensive zone goes a lot smoother every time it’s him collecting the puck – zone exits almost automatic. It’s a treat to watch and I’m highlighting it now for others to hopefully see and enjoy. Quite the artform if I’m being honest.
The Goals –
Flashalytic’s 3 Stars –
1) Jacob Markstrom
2) Chris Tanev
3) MacKenzie Weegar
The Flames’ next match is Tuesday night at home against the Pittsburgh Penguins.
(Stats compiled from Naturalstattrick.com // Game Score from Hockeystatcards.com // xG and Under Pressure charts from HockeyViz.com // Game Flow and Shot Heatmap from NaturalStatTrick.com)
News
Recent articles from Shane Stevenson