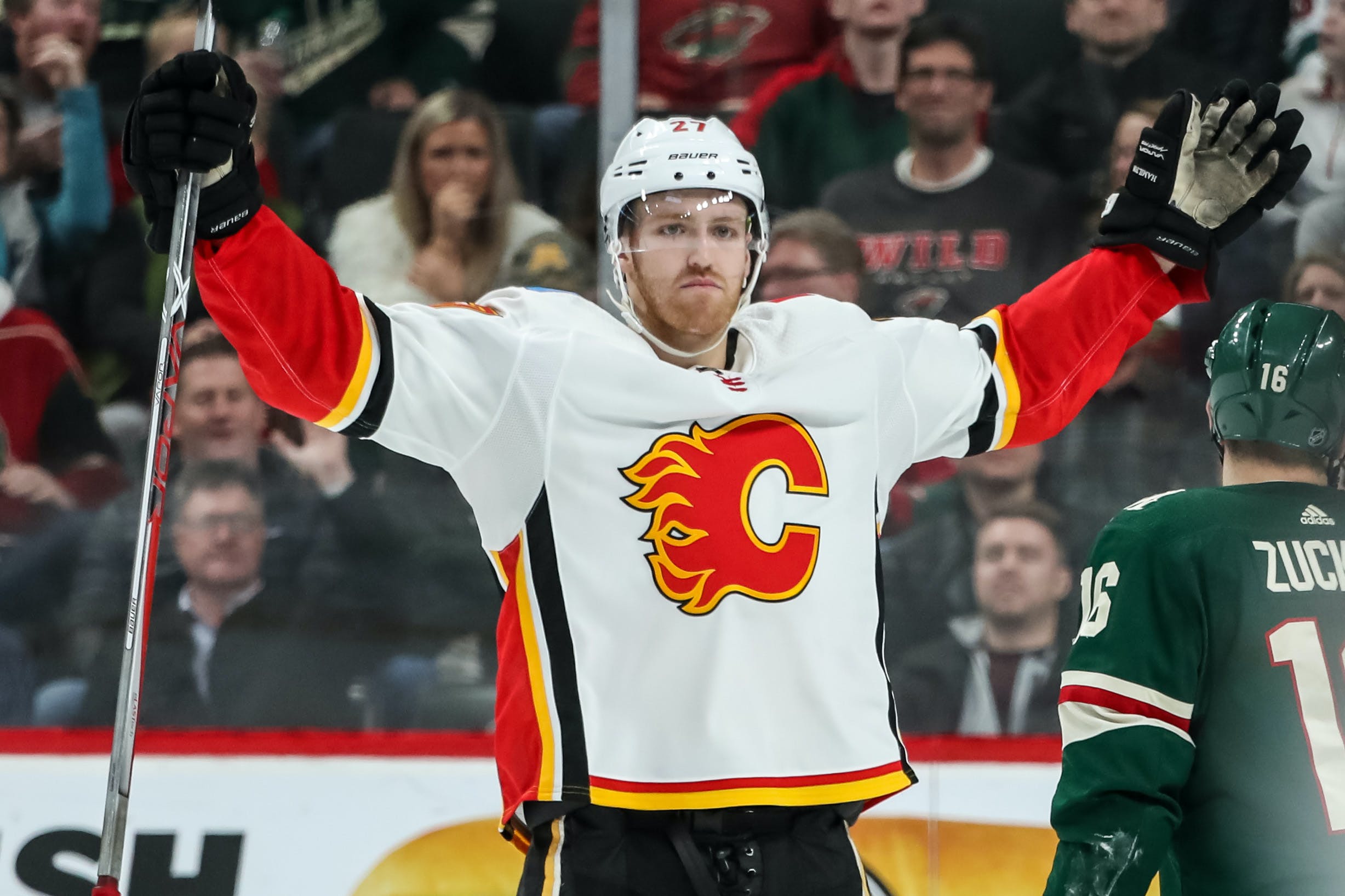 Dougie Hamilton, after setting a career high in points last year, set a new mark yet again. This time, he scored a career-high 17 goals, finding himself sharing the top spot for goals by a defenseman in 2017-18.

When Hamilton was on this ice, many good things happened for the Flames.

Hamilton was one half of arguably one of the best defensive pairings in the league. Along Mark Giordano, the two of them led the NHL in 5v5 CF%, being the only two players to be above 57%. Include all situations and Hamilton was 60.42%, good for first in the league (Only his former teammate Torey Krug also had an all situations CF% north of 60). This was not surprising, as Hamilton saw much more special teams time on the powerplay (218 minutes) than the penalty kill (41 minutes).

Many of the Flames’ forwards saw a boost in their possession numbers when playing with Hamilton. Among the regular forwards, not a single player was worse off with Hamilton versus without him. Hamilton was frequently played with the team’s top forwards, but was seen with Johnny Gaudreau and Sean Monahan far more often than any other player.

On the other side of the ice, Hamilton was deployed against top forwards for much of the season, making his possession metrics all the more impressive.

At several points through the season, it felt like Hamilton was not on the ice when he should have been. There was the narrative that he spent too much time in the box. While it is true that he took the most minor penalties on the team, Hamilton also played the third most minutes, behind only Giordano and TJ Brodie. Taking that into account, there was likely some undeserved blame put onto Hamilton. In fact, Giordano had similar numbers in terms of penalties.

The real problem with Hamilton not being on the ice when he should have been was more about when the Flames were in need of offense and Gulutzan opted for someone else. In the games that went to overtime, Hamilton wasn’t trusted enough defensively to be played. Instead, Brodie skated in extra time far more often. This isn’t a knock on Brodie, but Hamilton could have played a large role in capturing the extra point given his prowess with possession.

The Flames are a better team when Hamilton is on the ice. That much is objectively true, and this season was no exception.

Despite setting a career high with 50 points last season, it wasn’t unreasonable to expect that Hamilton would blow through that number by this season’s end. Unfortunately that didn’t happen. Hamilton had four more goals to his name and 10 fewer assists. It would have been nice to see him reach the scoresheet more often, but this season was no disappointment by any means.

Many of Hamilton’s performance metrics saw significant increases, suggesting he’s gotten better in his top pairing role. At 5v5, his CF increased 2.10%, SCF increased 2.50%, and HDCF increased a whopping 4.74%. Unfortunately, his PDO took a bit of a hit, as both shooting percentage and save percentage fell, dropping his PDO from 1.001 to 0.987.

A probable reason that Hamilton set a career high in goals was that he saw over a 30 minute increase in overall powerplay time. Six of his goals were scored on the powerplay, four more than last season. His powerplay goals per 60 shot up an entire goal’s worth from 0.65 to 1.65, but his assists dropped from 3.91 to 1.65. It’s not surprising that his overall powerplay numbers suffered given the atrocity that was the Flames powerplay.

All in all, there’s no red flags in Hamilton’s play. He oft tilted the ice in the Flames’ favour.

With Bill Peters taking over as head coach, perhaps next season will see Hamilton being played more often. After all, Peters happened to call the pairing “elite in many different areas.” While Hamilton probably won’t challenge Giordano in overall ice time, it wouldn’t be surprising to see him be used in more tough situations with the game on the line.

It may be too early to be this optimistic, but given proper usage and hopefully a team that isn’t as snakebitten as they were this season, Hamilton may yet post another career high (or several) somewhere along the way.

With a few uncertainties regarding next year’s possible roster, it would be entirely egregious to not have Hamilton be a part of it. Guns and Ships shall remain echoing through the Saddledome for the foreseeable future.