Advertisement
Ad
The Flames should not trade for Duncan Keith 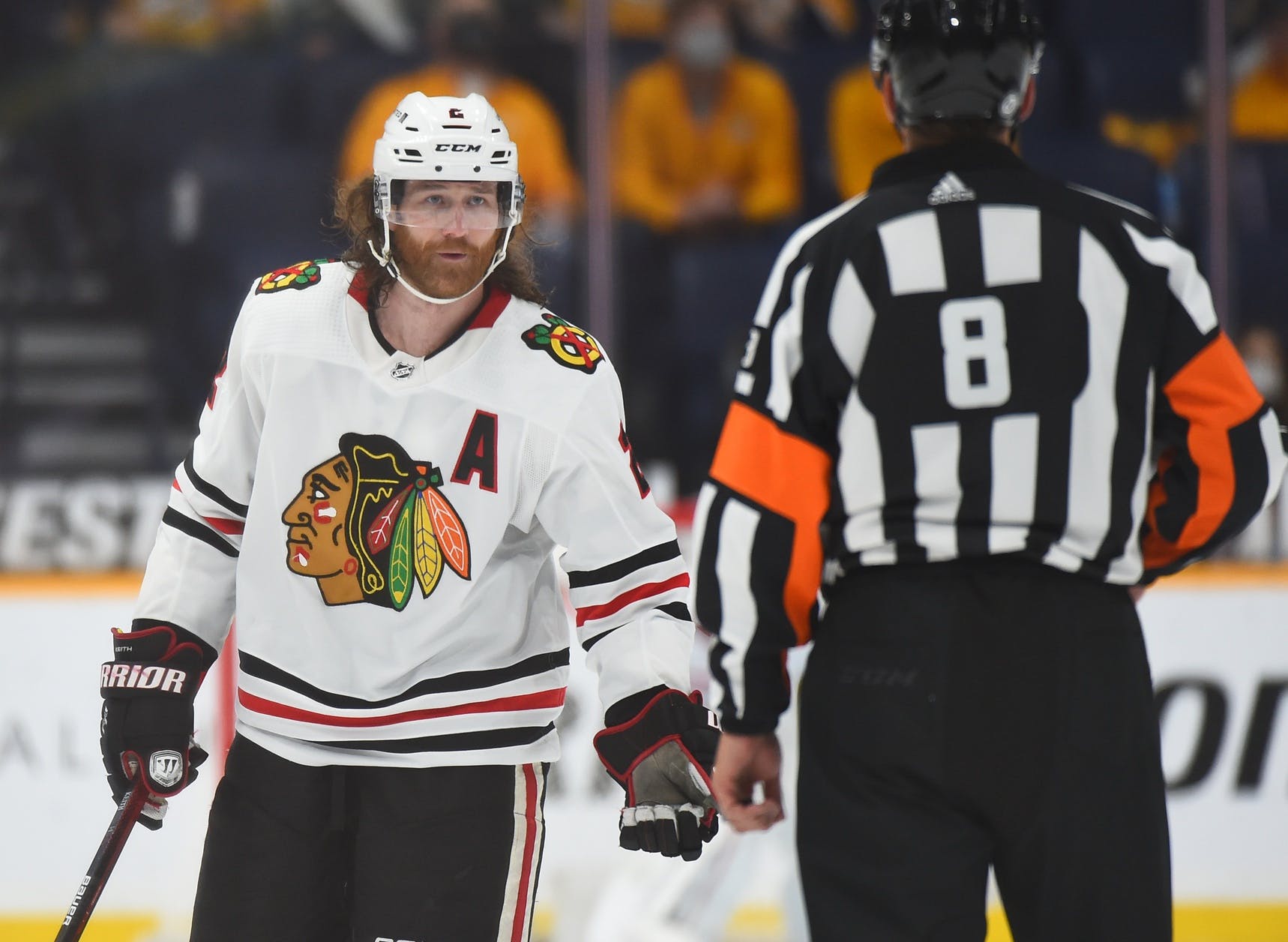 Photo credit: Christopher Hanewinckel-USA TODAY Sports
By Mike Gould
1 year ago
Comments
Duncan Keith, a three-time Stanley Cup champion and veteran of 16 NHL seasons in Chicago, is reportedly working with his team on a potential move to the Western Conference.
On Wednesday, Sportsnet’s Elliotte Friedman reported Keith is collaborating with Chicago management on a deal to send him either to the “Pacific Northwest” or “western Canada.”

There are rumblings Chicago is working on a potential Duncan Keith trade to either the Pacific Northwest or Western Canada. Word is Keith and team are working together to get him to a place he wants to go. We will see where this goes.

The NHL features four Canadian teams in its Western Conference:
Additionally, the Seattle Kraken will become the NHL’s first team based in the Pacific Northwest region of the United States.
Friedman did not specifically mention the Flames as a potential landing spot, but Calgary certainly falls into the geographical region indicated by the Sportsnet insider. Keith was born in Winnipeg and played minor hockey in Penticton, BC.
Few active players can match Keith’s impressive resume in professional and international hockey. He was the number-one defenseman on three Stanley Cup teams, capturing two Norris Trophies and a Conn Smythe along the way. In 2017, Keith was named one of the “100 Greatest NHL Players.”
Advertisement
Ad
Advertisement
Ad
Keith represented Canada at the 2010 and 2014 Winter Olympics, capturing gold medals in the men’s ice hockey competition at both events. He’s all but guaranteed to enter the Hockey Hall of Fame in his first year of eligibility.
Unfortunately, Keith is now 37 and has experienced a marked drop-off in his level of effectiveness.
A selection of Duncan Keith’s figures with Chicago (data from Hockey-Reference and Natural Stat Trick)
More of Duncan Keith’s play-driving figures with Chicago (data from NST, all 5v5)
For a long time, Keith used his smooth skating and terrific playmaking ability to assert himself as one of the NHL’s premier offensive defensemen. He’s remained a positive presence in the attacking end for the majority of his career, with Evolving-Hockey assessing his offensive play in 2020–21 as worth 2.7 expected goals above replacement level (xGAR).
Advertisement
Ad
Advertisement
Ad
Keith scored just 15 points (four goals, 11 assists) in 54 games this season but helped Chicago generate 2.11 expected goals for/60 during his shifts, the sixth-best mark of any regular on the team (min. 15 GP). Only Dylan Strome, Vinnie Hinostroza, Pius Suter, Adam Boqvist, and Dominik Kubalik ranked ahead of Keith in that regard.
While Keith has kept his offensive game somewhat intact — his reputation in that area is certainly buoyed by a decent-sized upswing in 2020–21 — his defensive impacts are in tatters. Chicago surrendered 2.93 expected goals/60 during Keith’s shifts at 5-on-5 last season, second behind only rookie Wyatt Kalynuk as the worst defensive figure on the team.
Keith has two years remaining on a 13-year megadeal he signed with Chicago back in 2009. He possesses a full no-movement clause and counts for $5.538 million against the salary cap in each of the final two seasons of the contract. Despite this, Keith will only receive a total of $3.6 million (all in base salary) between the 2021–22 and 2022–23 campaigns.
Advertisement
Ad
Advertisement
Ad
The Flames certainly need more left-handed defensemen. Mark Giordano is three months younger than Keith and looks like he might be bound for Seattle. Noah Hanifin is coming off shoulder surgery. Juuso Valimaki is, and looks, 22.
While it might be tempting to consider Keith as a potential replacement for a departed Giordano, there are two main factors to consider:
At a minimum, Giordano played at a top-four level in 2020–21. He put forth some genuinely excellent performances when united with Chris Tanev under Darryl Sutter near the end of the season.
Evolving-Hockey judged Giordano’s performance in 2020–21 as having been worth 11.7 expected goals above replacement. The same site assessed Keith’s play in that season as being worth 8.1 expected goals below replacement level.

If Giordano is selected by Seattle, the Flames will definitely need to look at options to try and replace the value he has reliably provided on the back-end. Keith was, at one point, a top-tier defenseman in the NHL. He’s now one of the least valuable players on the trade market.
Advertisement
Ad
Advertisement
Ad
The only reason to acquire Keith would be to receive a valuable asset in exchange for taking him. If Chicago were willing to part with a high draft pick or one of its more promising young players along with Keith, the Flames might have reason to explore making a deal.
As things stand, the Flames are far more likely to try and weaponize their cap space and asset base to acquire younger and more impactful players. Keith is certainly not young and is no longer impactful in a positive way. The Flames should look elsewhere for defensive help.