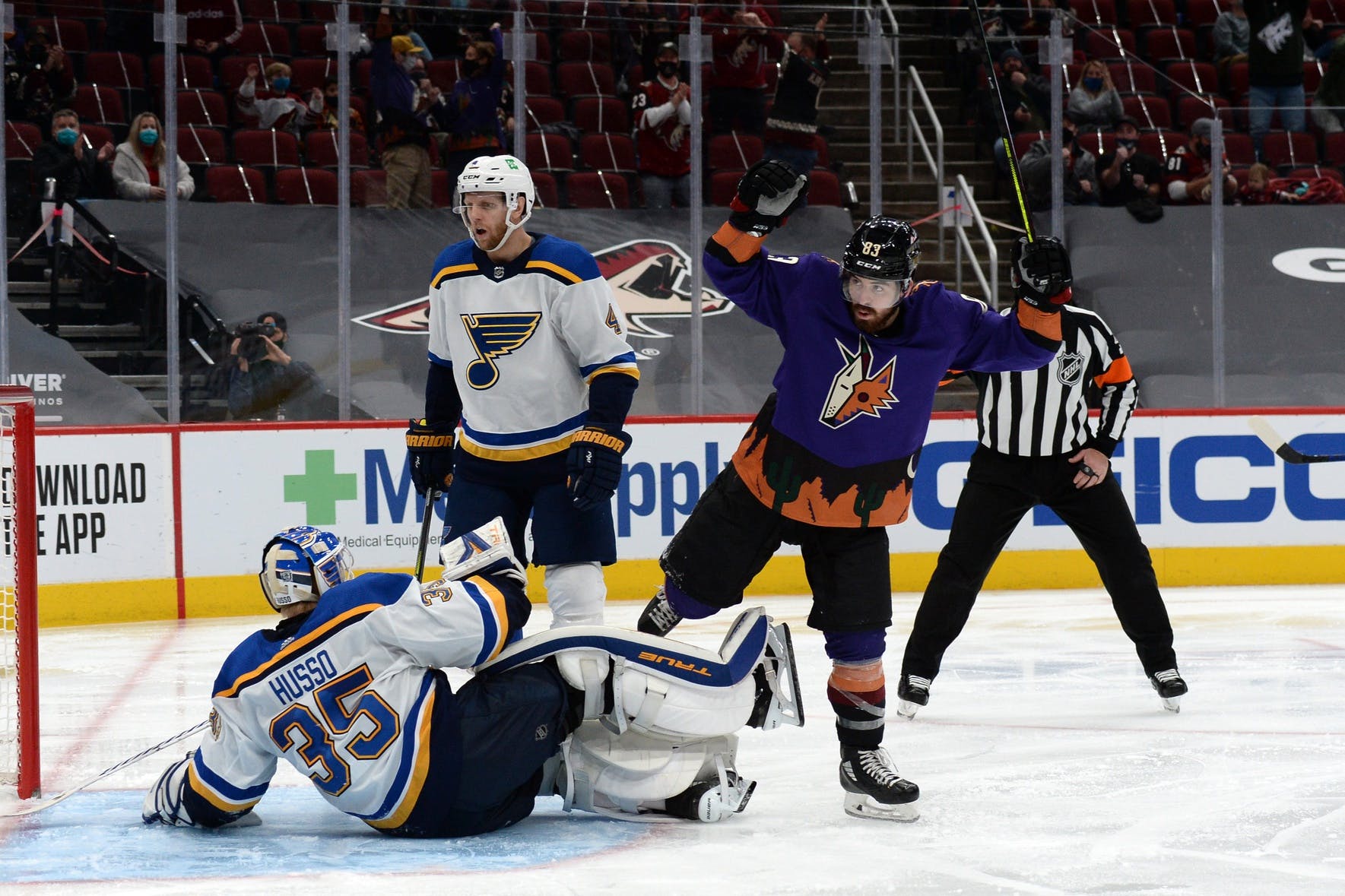 By Mike Gould
1 year ago
Welcome back to FlamesNation’s 2021 Flames Trade Targets series, in which our team of writers takes a look at some of the players around the league either in need of a change of scenery or rumoured to be on the market.
It appears Conor Garland may be destined to leave the desert.
Talks have reportedly stalled between the Arizona Coyotes and Garland, a pending restricted free agent and one of the team’s top offensive players. In an appearance on TSN 1260 in Edmonton last Thursday, Daily Faceoff’s Frank Seravalli indicated the two sides are having difficulty maintaining communication with respect to a new contract.
In his debut piece with Daily Faceoff on Jun. 23, Seravalli ranked the 25-year-old Garland as the No. 4 “Trade Target” available:

Scoop: The Coyotes have not treated Garland like the player who was the heartbeat of their team. Garland’s camp, led by agent Peter Cooney, submitted two contract proposals (as requested by the club) on May 20 and there has been zero communication or dialogue since. “We’re just looking for Conor to be paid respectfully like the core player he was for the Coyotes,” Cooney told Daily Faceoff on Tuesday. It appears that will be elsewhere, which is no real shock given that Arizona nearly moved Garland in the days prior to April’s trade deadline.

In February of 2019, Garland signed a two-year contract with the Coyotes annually worth $775,000. He proceeded to outperform that deal by a wide margin, leading Arizona with 22 goals in 68 games during the 2019–20 season before tallying 39 points (12 goals, 27 assists) in just 49 games last year.
While Phil Kessel and Jakob Chychrun both scored more points than Garland in 2020–21, the crafty right-shooting winger bested them both for the team lead in points-per-game and helpers.
Garland received little fanfare but emerged as a genuine star forward for Arizona over the last two campaigns, playing a key role in helping the Coyotes return to the playoffs in 2020.
A selection of Conor Garland’s play-driving figures with the Arizona Coyotes (data from Natural Stat Trick, all 5v5)
Note: In the second-last column, a positive number indicates the Coyotes had better offensive results with Garland on the ice than without him. In the last column on the right, a negative number indicates the Coyotes allowed fewer chances with Garland on the ice than without him.
More of Conor Garland’s play-driving figures with the Arizona Coyotes (data from Hockey-Reference and NST)
Only Christian Dvorak (18:24) averaged more time on ice per game than Garland’s 17:55 in 2020–21. Garland was massively impactful during his shifts, providing 7.8 goals above replacement and $5.3 million of total value last season (according to Evolving-Hockey).
Despite standing at just 5’10” and weighing 165 pounds, Garland rarely misses an opportunity to assert himself on the forecheck and when the puck is within his reach. He’s a tenacious, speedy, and intelligent offensive player with a quick shot and excellent hands.
Much like Andrew Mangiapane, Garland was a late-round pick as an overager in the 2015 NHL Entry Draft. After being selected 123rd that year, Garland returned to the QMJHL’s Moncton Wildcats and put up a mind-boggling 128 points in just 62 games.
He eventually emerged as an NHL producer midway through the 2018–19 season — again, like Mangiapane — and concluded that campaign with 13 goals and 18 points in his first 47 big-league games.
Since then, Garland has 34 goals and 78 points in 117 games. Those figures translate to 24-goal and 55-point paces over an 82-game schedule. He’s been a quality producer on a defense-first Arizona team ever since he burst into the league as a 22-year-old.
Now 25, Garland needs a new contract and has arbitration rights. Due to his later arrival into the NHL, Garland will not become a UFA until he turns 27 and has two seasons remaining under RFA control.
Few players on the trade market would check off as many of the Flames’ boxes as Garland. He’s fast, he shoots right, he scores a lot, and he can be locked up to a long-term deal. With Arizona reportedly listening on everybody except Jakob Chychrun, it can safely be assumed they’ll be looking for younger players or picks as part of a Garland return.