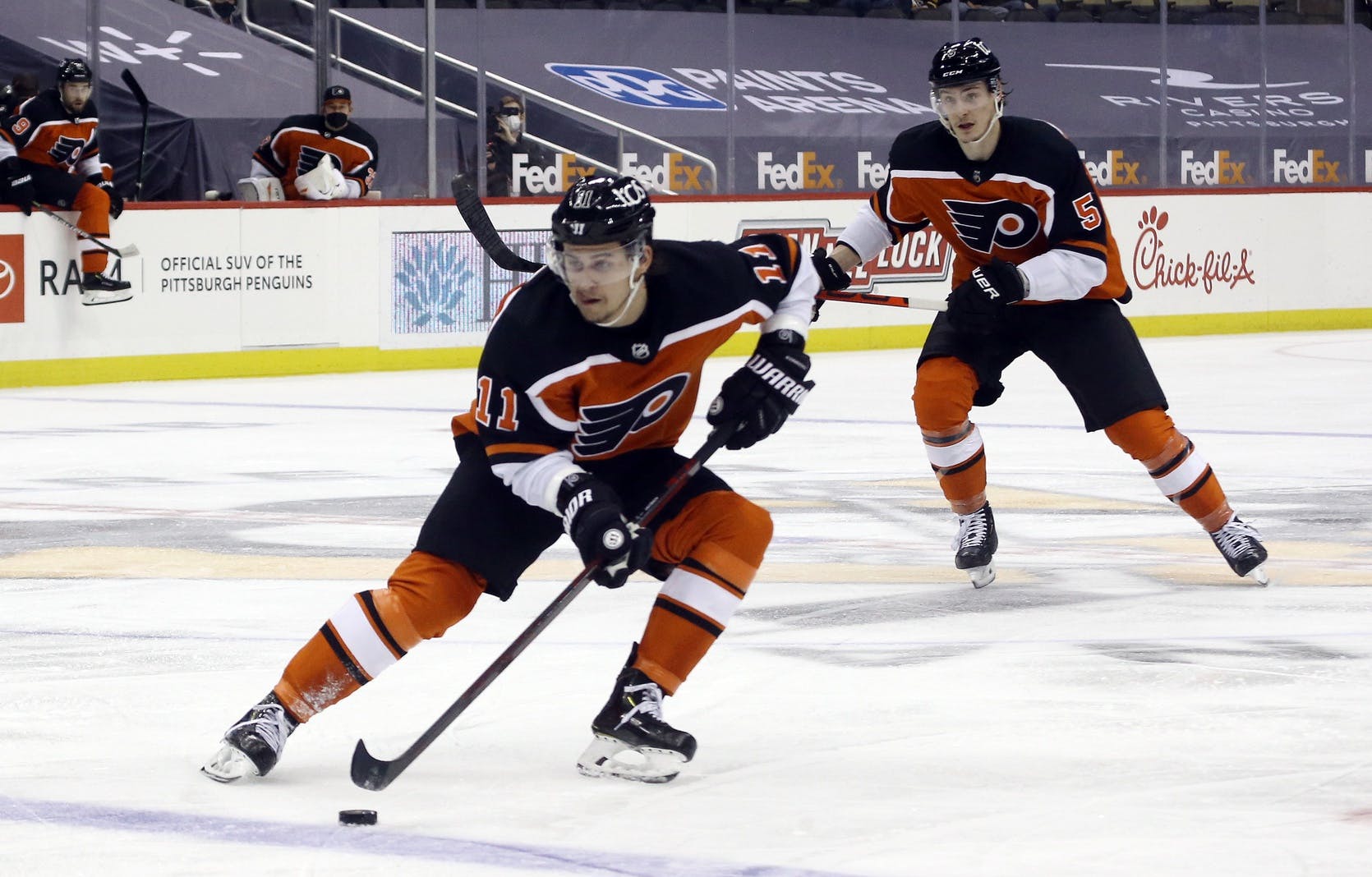 By Mike Gould
1 year ago
Welcome back to FlamesNation’s 2021 Flames Trade Targets series, in which our team of writers takes a look at some of the players around the league either in need of a change of scenery or rumoured to be on the market.
Both Travis Konecny and the Philadelphia Flyers struggled to stay afloat during the 2020–21 season.
The Flyers ultimately missed the playoffs by 13 points. Konecny scored just 11 goals in 50 games and endured through a difficult year in which he was made a healthy scratch before spending two weeks on Philadelphia’s COVID–19 protocol list.
In October 2020, TSN added Konecny to its “trade bait” list. His name was removed from the list by Apr. 12, 2021, but Konecny remains one of the most attractive pieces on a Flyers team heavily rumoured to be active in the 2021 off-season.
Konecny, 24, has four years remaining on a contract paying him $5.5 million per season. He’s a right-handed right wing who stands 5’10” and weighs 175 pounds.
Since debuting with the Flyers in 2016–17, Konecny has scored 219 points (94 goals, 125 assists) in 349 games. He averaged 15:54 of ice-time per game in 2020–21, up slightly from his career average of 15:20.
Konecny emerged as a bona fide top-line forward with the Flyers in the 2019–20 season, scoring 61 points (24 goals, 37 assists) in just 66 games before the COVID–19 shutdown.
Evolving-Hockey assessed Konecny’s play in the 2019–20 campaign as having been worth a total of 18.6 expected goals above replacement (xGAR) and $8.5 million.
According to Evolving-Hockey’s model, Konecny only accumulated 2.6 xGAR in 2020–21 and provided just $2.4 million of value—the lowest figure of his career—against his $5.5 million salary cap hit.
A selection of Travis Konecny’s play-driving figures with the Philadelphia Flyers (data from Natural Stat Trick, all 5v5)
Note: In the second-last column, a positive number indicates the Flyers had better offensive results with Konecny on the ice than without him. In the last column on the right, a negative number indicates the Flyers allowed fewer chances with Konecny on the ice than without him.
More of Travis Konecny’s play-driving figures with the Philadelphia Flyers (data from Hockey-Reference and NST)
In 2020–21, Konecny averaged a career-low of 7.22 shots-per-60 and came close to equaling his worst expected goal and scoring chance rates. His on-ice goals-for and expected goals-for percentages remained strong, with his 52.21 xGF% (per NST) ranking sixth among Flyers with at least 100 minutes played.
Konecny scored on 11% of his shots in 2020–21, his worst conversion rate since he shot 8.3% in his rookie season. He still managed to finish fourth on the Flyers with 23 assists and scored at a 56-point pace in spite of his issues with finishing.
Between the 2017–18 and 2019–20 seasons, Konecny ranked among the league’s most efficient goal-scorers. Here is a comprehensive list of every player (min. 50 games played) who averaged more goals-per-60 at 5-on-5 than Konecny over those three seasons:
Konecny slots in at number 12 on this list with 1.15 goals-per-60, ranking ahead of the likes of Jake Guentzel (1.14), John Tavares (1.14), James van Riemsdyk (1.13), Nathan MacKinnon (1.10), Vladimir Tarasenko (1.09), Brayden Point (1.05), and Leon Draisaitl (1.03).
In 2020–21, Konecny scored just 0.65 goals-per-60 at 5-on-5. In his exit interview with the media on May 11, 2021, Konecny detailed his “weird” season and expressed his frustration at his decreased scoring output:

I wish I could tell you [what caused the drop-off in goals], I would’ve fixed it. I’m not too sure. I mean, I don’t know. I think the season was weird, in general, and if you had any sort of issues in your game it was hard to work on certain things and get back to where you needed to be. There was no practice time to reset and maybe get your confidence back. But, other than that, I was—I mean, maybe I wasn’t shooting the puck as much as I was last year. Trying to do too much, maybe, just get back to simplify my game [sic]. I’m going to have some time to reflect on that and hopefully figure it out over the offseason.

Despite his down season, Konecny remains a supremely skilled winger who seldom shies away from physical altercations or fights. He possesses a non-stop motor to go along with his wicked shot and soft hands.
The Flames and Flyers both suffered through similarly underwhelming seasons and, coincidentally or not, make a fair amount of sense as trading partners.
Johnny Gaudreau has expressed his desire to stay in Calgary but grew up a Flyers fan at the south end of New Jersey. Sean Monahan is reportedly on the block. If the Flames are gearing up to move one of their star players, they could very well be looking to acquire another player of a certain pedigree in an attempt to fill a void.
Konecny is the type of player few teams in the league would pass up a chance to acquire. The Flyers certainly wouldn’t just give him away for free.