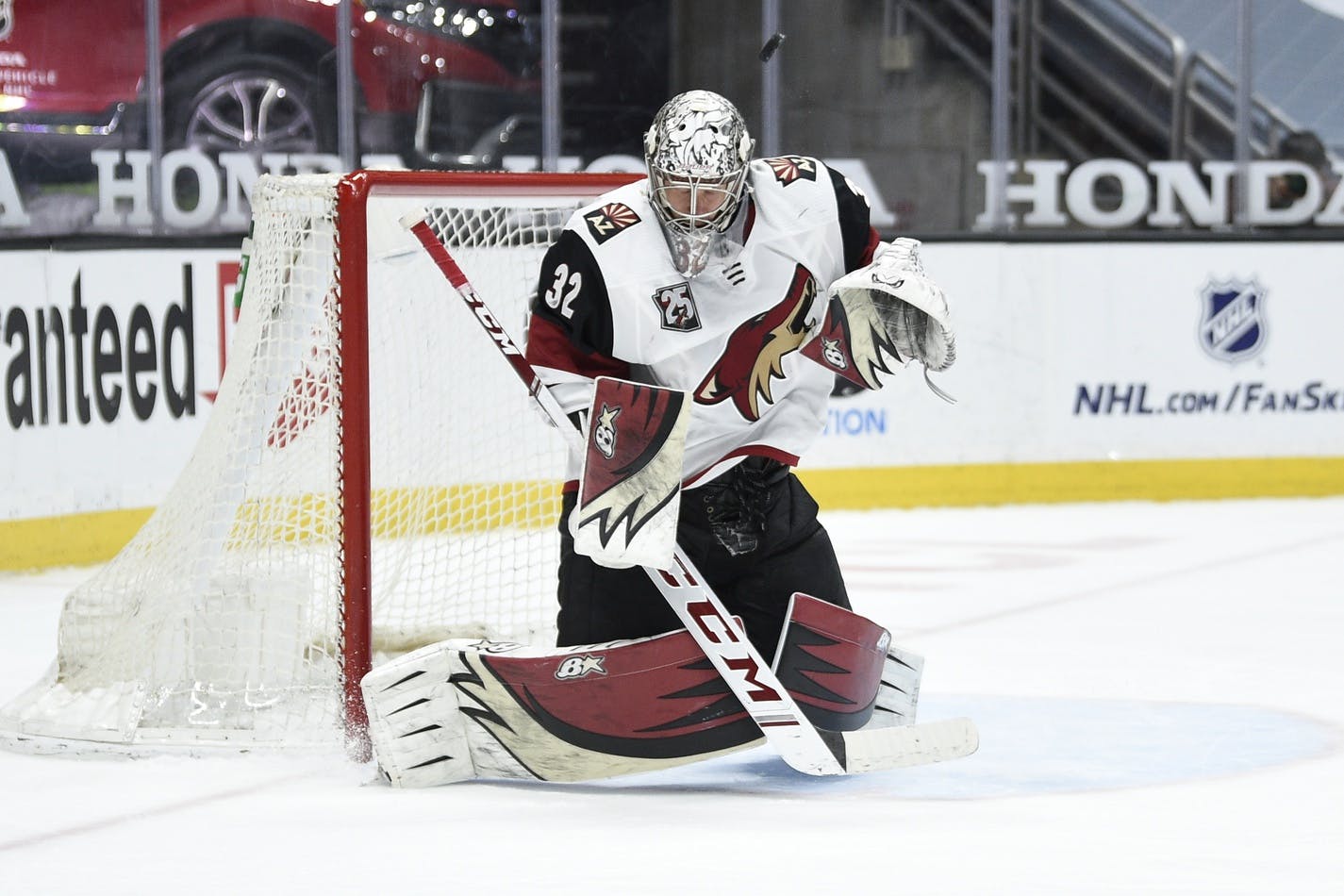 By Mike Gould
1 year ago
The Calgary Flames need goaltending help.
31-year-old Jacob Markstrom is undeniably the team’s No. 1 option, with his $6 million contract and no-movement clause looming large over the Flames’ crease.
Right now, he’s also Calgary’s only option. The Flames currently have two goaltenders under contract and, with all due respect, Dustin Wolf isn’t ready to play in the NHL. In all likelihood, Wolf will be spending the entire 2021–22 season in the American Hockey League with the Stockton Heat.
Tyler Parsons isn’t the guy, either. He’ll be back — the Flames tendered him a qualifying offer on Monday — but he’s coming off a season where he appeared in just one professional game and allowed five goals on 25 shots. Parsons needs to play a lot of good games in the AHL before he’s looked at as a potential backup option behind Markstrom.
Unrestricted free agency is set to begin today. This period will likely give the Flames their best opportunity to identify and sign their backup goaltender for the 2021–22 season. Let’s take a look at some of the top candidates on the market.
Before we start, let’s cross some names off this list for a variety of reasons.

Reimer, 33, is one of the most experienced goaltenders on the market. With 384 NHL games under his belt with Toronto, San Jose, Florida, and Carolina, Reimer has travelled the continent many times over as a professional hockey player. He’s also found success in each of those markets.
After spending over a half-decade as the Maple Leafs’ de facto starter (not an easy task in the early 2010s), Reimer made it to the 2016 Stanley Cup Final with San Jose as Martin Jones’ backup. In eight regular-season games with the Sharks, Reimer went 6-2-0 with a .938 save percentage. Not bad.
Reimer signed a five-year deal with the Florida Panthers in July 2016 and played reasonably well in the first two seasons of the contract, posting .920 and .913 single-season save percentages. Along with Florida’s other three goaltenders (Roberto Luongo included), Reimer struggled mightily in 2018–19 and was dealt to the Hurricanes the following summer.
In 2019–20, Reimer posted one of the best seasons of his career. He combined a 14-6-2 record with a .914 save percentage and, according to Evolving-Hockey, 7.63 goals saved above expected (GSAx). Reimer played 22 games with the 2020–21 Hurricanes and took a slight step back, posting a .906 record and allowing 2.70 goals more than expected.
Reimer likely wouldn’t be too expensive and he’s capable of putting together extended stretches of excellent play. From a backup, that’s just about all a team can expect.

Halak is another goaltender who’s been around the block many times. Not including his brief stint with the Buffalo Sabres (he dressed as a backup for the team in 2014 but never played), Halak has suited up with the Montreal Canadiens, St. Louis Blues, Washington Capitals, New York Islanders, and Boston Bruins during his lengthy NHL career.
The 36-year-old Slovak netminder has 539 NHL games to his credit and an impressive .916 career save percentage. Dating back to 2007-08, Halak has posted a positive GSAx figure in 11 of his last 14 NHL seasons. He’s been a consistently excellent goaltender over a very long period of time.
After starting his tenure in Boston with seasons of .922 and .919 save percentages, Halak went 9-6-4 with a .905 in 2020–21. He also posted one of those three negative GSAx seasons, allowing 7.36 more goals than expected in just 19 games.
Halak has bounced back from worse seasons — he posted a -9.23 GSAx figure in his final season on Long Island before improving to +10.08 in his debut with Boston — but he’s also getting up there in years. He’s been connected to Vancouver in early reports.

Bernier is another ex-Leaf who has found success in many different markets around the league. The Los Angeles Kings selected Bernier with the 11th overall pick in the 2006 draft; he posted a .912 save percentage and a 29-20-6 record over parts of five seasons with the Kings before being traded to Toronto in 2013 for a collection of futures.
While fellow 2013 offseason acquisition David Clarkson struggled to find his game in Toronto, Bernier thrived in his debut go-round with the Leafs. He went 26-19-7 with a .922 save percentage and 8.31 GSAx. Bernier subsquently posted a .912 to go along with 2.32 GSAx in 2014–15 but struggled in 2015–16, allowing 11.87 more goals than expected (the third-worst mark in the NHL) in just 38 games.
Bernier’s tenure with the Leafs concluded unceremoniously when he was traded to the Anaheim Ducks in exchange for a “conditional draft pick” which ended up being literally nothing. Since 2016, Bernier has operated almost exclusively in a tandem or as a backup and has never come close to playing 55 games in a season (as he did in back-to-back years with the Leafs).
Most recently, Bernier appeared in 24 games with the abysmal 2020–21 Detroit Red Wings. The 32-year-old posted a 9-11-1 record and a .914 save percentage; his 1.80 GSAx figure ranked 21st among the NHL’s 92 goaltenders last season. Despite being traded to the Hurricanes last week as part of the Alex Nedeljkovic deal, Bernier is reportedly unlikely to sign in Carolina and is set to hit the market.

Brossoit, 28, has spent his entire NHL career in Canada. Prior to his three seasons with the Winnipeg Jets, Brossoit spent parts of five campaigns in Edmonton with the Oilers organization.
The Calgary Flames — yes, those Flames — drafted Brossoit in the sixth round of the 2011 NHL Entry Draft (exactly 60 spots later than Johnny Gaudreau). Then-GM Jay Feaster eventually included him as part of the 2013 trade with Edmonton which saw Ladislav Smid become a Flame.
Brossoit only played 28 games with the Oilers before signing a UFA deal with the Jets in 2018. He immediately emerged as the team’s go-to backup option behind Connor Hellebuyck, posting an impressive .925 save percentage and 10.89 GSAx in 21 games.
In 2020–21, Brossoit appeared in 14 games with Jets and went 6-6-0 with a .918 save percentage and 0.42 GSAx. He’s one of the youngest UFA goaltenders on the market and he appears to have potential upside as a tandem goaltender. If the Flames want to bring in a potential longer-term option to push Markstrom for starts, Brossoit might be their best bet.
Before we identify our top option, let’s take a look at some other likely backups who missed out on being included on this list.

Raanta might be one of the most talented goaltenders on the market. He’s also dealt with numerous injuries during his tenure with the Arizona Coyotes and appeared in just 12 games last season. Still, the 32-year-old Finn is capable of playing at an elite level when he’s healthy.
One of the NHL’s premier backup goaltenders during his time in Chicago and New York, Raanta became a Coyote in 2017 as part of a deal which saw Tony DeAngelo (heard of him?) and a first-round pick head to the Rangers.
In his debut turn with the ‘Yotes, Raanta was nothing short of sensational. He managed a 21-17-6 record in 47 games with the club in 2017–18, posting an eye-popping .930 save percentage and ranking third in the entire NHL (behind John Gibson and Jonathan Quick) with 25.14 GSAx.
Injuries limited Raanta to just 12 games in 2018–19 but he returned in full force to help the Coyotes make the playoffs in 2019–20. In 33 games during the shortened season, Raanta went 15-14-3 with a .921 save percentage and ranked 13th in the NHL with 5.64 GSAx.
Raanta dealt with multiple injuries in 2020–21 and posted a .905 save percentage and -1.91 GSAx in a dozen games. If he’s looking to rebuild his value on a short-term contract, he could find a home in Calgary. The Flames certainly could use a backup option who is capable of providing bona fide top-tier goaltending if called upon.