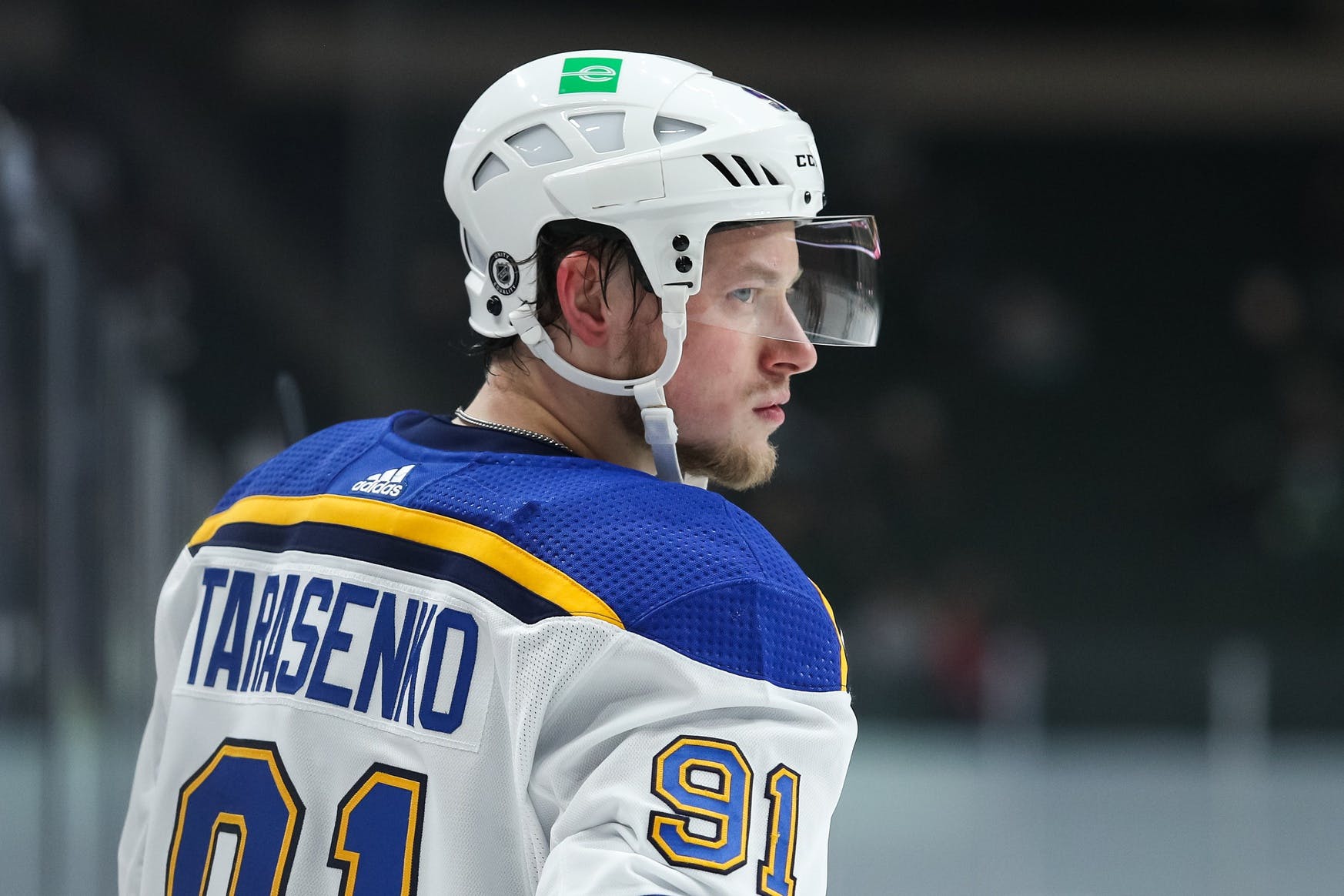 By Mike Gould
1 year ago
Welcome back to FlamesNation’s 2021 Flames Trade Targets series, in which our team of writers takes a look at some of the players around the league either in need of a change of scenery or rumoured to be on the market.
St. Louis Blues winger Vladimir Tarasenko has reportedly requested a trade.
The Athletic beat writer Jeremy Rutherford published a piece (paywall) Wednesday evening detailing Tarasenko’s motivations and the Blues’ potential avenues for orchestrating a move.

Tarasenko has officially requested a trade from the club, multiple sources have told The Athletic.
The right winger asked for the move earlier this offseason, and Blues general manager Doug Armstrong is currently attempting to facilitate the deal, according to league and team sources. There is no apparent timetable for a move, but the expectation is that it could happen before the start of the 2021-22 season.
[…]
So why does he want out? According to sources familiar with the situation, he is upset with the team’s handling of his shoulder surgeries in 2018 and 2019 — his first two of three such surgeries, which were both performed by Blues physicians — and feels there’s no trust left between him and the organization.

Tarasenko is set to turn 30 in December and has two years remaining — and a full no-trade clause — on a deal paying him an average of $7.5 million per season.
Over the last two seasons, Tarasenko has scored just seven goals and 24 points in 34 games. He’s missed an astounding 93 games over that span, playing in just 26.8% of the Blues’ 134 regular-season contests.
A member of the Blues’ 2019 Stanley Cup team, Tarasenko scored 11 goals and 17 points in St. Louis’ 26-game playoff run. He added 68 points (33 goals, 35 assists) during that regular season, capping off a five-year streak of him scoring at least 65 points per year.
The Tarasenko of the past was an incredible offensive threat who coupled innate creativity with electrifying puck skills. He was, without a doubt, one of the best wingers in the NHL.
Now, even when cleared to play, Tarasenko has become a far less effective presence and a player who Evolving-Hockey assessed as being worth -0.8 expected goals above replacement last season.
A selection of Vladimir Tarasenko’s play-driving figures with the St. Louis Blues (data from Natural Stat Trick, all 5v5)
Note: In the second-last column, a positive number indicates the Blues had better offensive results with Tarasenko on the ice than without him. In the last column on the right, a negative number indicates the Blues allowed fewer chances with Tarasenko on the ice than without him.
More of Vladimir Tarasenko’s play-driving figures with the St. Louis Blues (data from Hockey-Reference and NST)
Long one of the NHL’s highest-volume shooters, Tarasenko’s ability to pepper opposition goaltenders has decreased in the past two seasons. He’s taken just 91 shots in those 34 games, which is a 219-shot pace over an 82-game schedule and a far cry from when he pushed near or over the 300 plateau every year.
Tarasenko has also experienced a downswing in terms of generating quality shots, with his scoring chance and expected goal rates both hitting career-lows in the 2020–21 season.
Of course, it’s impossible to contextualize these figures without taking note of Tarasenko’s extensive history of shoulder injuries. In his Athletic piece, Rutherford noted Tarasenko damaged ligaments in his shoulder which went uncorrected until he underwent surgery — for the third time — in 2020.
Rutherford also mentioned the Blues’ significant interest in a certain young Flames forward:

Do the Blues dream big and go after Calgary’s Matthew Tkachuk?
Sources say the club has interest in Tkachuk, the oldest son of former Blues player Keith Tkachuk, who is a college scout for the team. The 23-year-old may not be available now, but he has just one year left on his three-year, $21 million contract, after which he’ll be a restricted free agent and could force the Flames’ hand to trade him before he becomes unrestricted.
According to sources, it would take much more than Tarasenko to pry Tkachuk away from Calgary, and that’s if Tarasenko would even waive his no-trade clause to go to western Canada, which isn’t a guarantee.

Suffice to say: Calgary should not even think of trading Matthew Tkachuk in a deal for Vladimir Tarasenko. Tkachuk is six years younger and a much better player who has more team control on his contract.
With his no-trade clause, Tarasenko has full control over his destination. This means there will likely be fewer teams involved to jack up the price — and, depending on Tarasenko’s desires, the Flames might not even be one of those clubs.
If Tarasenko would be open to joining the Flames, general manager Brad Treliving would be smart to do his due diligence on the Russian winger’s injury history and to gauge his likelihood of returning to full health. Tarasenko has clearly been one of the NHL’s premier talents in years past; now, after missing the majority of two consecutive seasons, his value has taken a substantial hit.
St. Louis would have to add significantly to Tarasenko to even have a hope of landing Tkachuk. A deal involving a player like Sean Monahan (or even Johnny Gaudreau) might be a more realistic aspiration for both parties.
Even so, the Flames would be taking a big risk by acquiring Tarasenko and, even with a decent improvement from his current level, he likely wouldn’t be enough to push them over the hump from their middling current state.
Tarasenko would likely be a “win-now” type of acquisition for a team either on the verge of contending or already there. The Flames don’t really fit into either category. For that reason — and the others stated above — they should probably look elsewhere for help at the forward position.