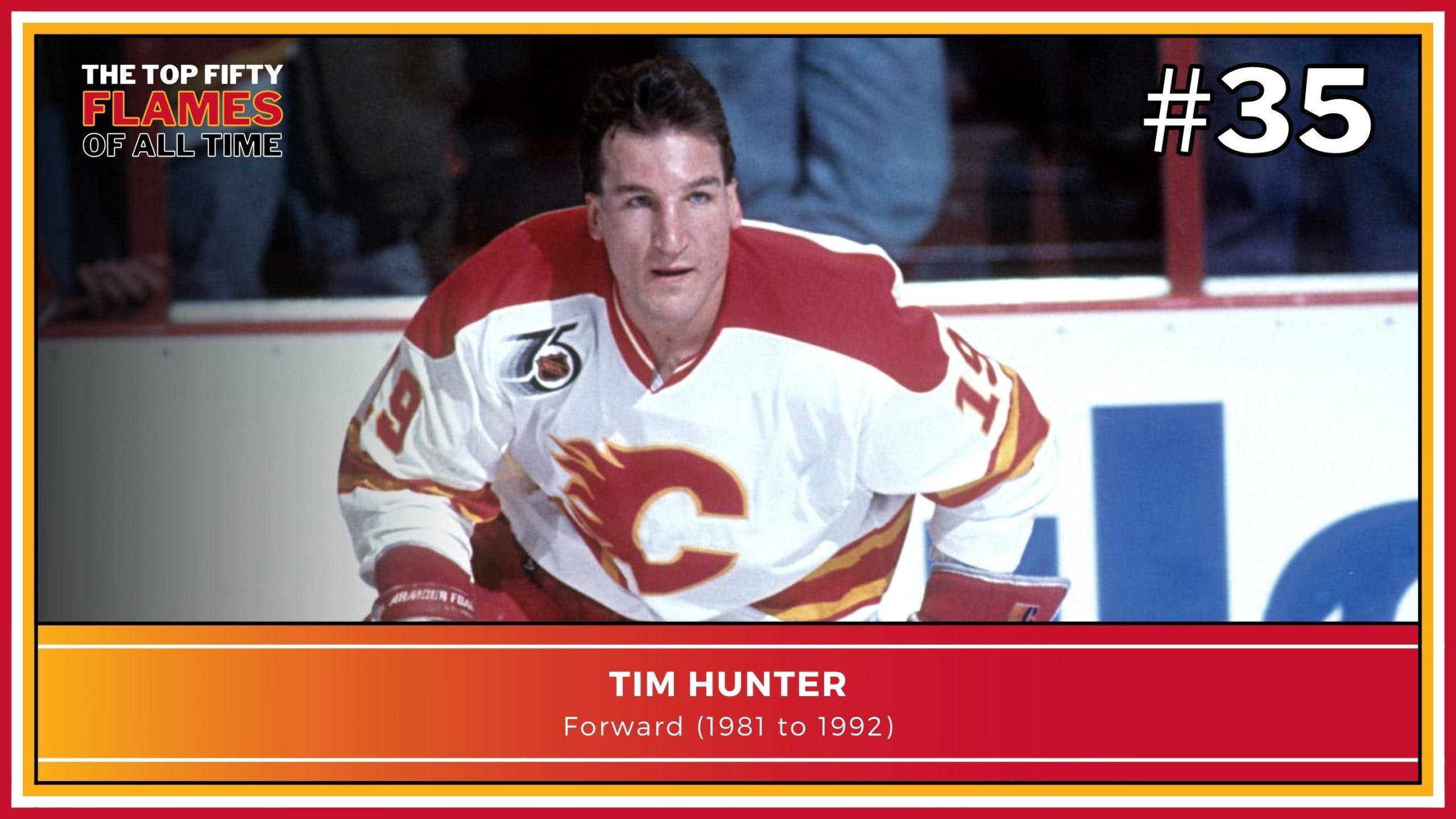 By Ryan Pike
2 months ago
Is it better to be feared or loved? In the case of longtime Calgary Flames enforcer Tim Hunter, why not both? Over the course of over a decade with the franchise, Hunter was beloved within the Flames fanbase (and locker room) for his excellence in a few really challenging on-ice role… and feared by opponents for the same reasons.
Hunter is #35 on our countdown.
Player, 1981-92
A product of Calgary, Hunter came up through the western junior circuits and played in the WHL with the Seattle Sounders. He was selected by the Flames in the third round of the 1979 NHL Draft.
After playing his post-draft season in the WHL, Hunter went pro and played three seasons in the minors in the American and Central leagues with occasional NHL appearances for the Flames. He finally broke through as a full-time NHLer in 1983-84, and soon carved out a really important niche for himself for the Flames.
In short: Hunter was a pain in the ass to play against. He was big. He was smart. He might not have been the most skilled player, but he had really strong situational awareness and the willingness to throw himself into physical situations. He became one of the top enforcers in the NHL in the 1980s – certainly the top pugilist in Flames history – and quietly he was one of the most effective shutdown forwards and penalty killers the Flames had during his time with the club.
Hunter was a key part of two trips to the Stanley Cup Final – the loss to Montreal in 1986 and the win in the 1989 rematch. He was an alternate captain for parts of four seasons. He led the NHL in penalty minutes twice and holds basically every penalty-related record in Flames franchise history.
Hunter dealt with injuries and some effectiveness challenges as the 1980s turned into the 1990s, and he was claimed by Tampa Bay in the 1992 expansion draft. Tampa immediately turned around and traded him to Quebec, and Hunter also played with Vancouver and San Jose before retiring in 1997.
You won’t see a lot of sweet dekes or cool goals on Hunter’s highlight reel. But for more than a decade, he was the heart and soul of the Flames. He was a really reliable player in all three zones, and one of the league’s most feared and respected enforcers. Without Hunter, the Flames’ skill players wouldn’t have been able to do their thing.