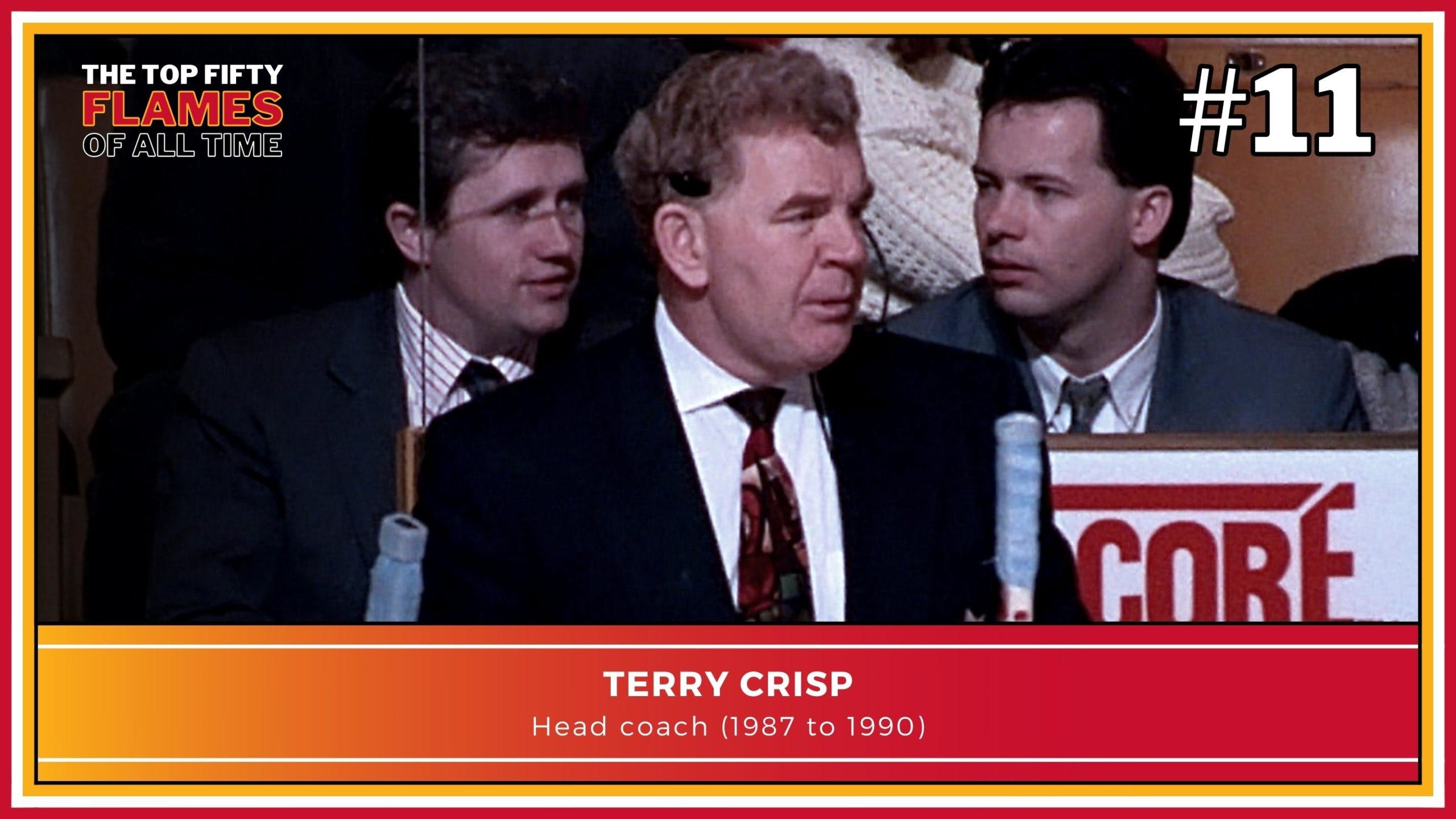 By Ryan Pike
4 months ago
The Flames franchise built itself up really nicely between 1972 and 1989, morphing from a ragtag expansion team into one of the powerhouses of the 1980s. They managed to beat the Edmonton Oilers and the Montreal Canadiens in playoff series, two of the dynamos of the decade. (They never had a crack at the New York Islanders, sadly.)
Terry Crisp may not be the most prominent coach in club history, serving behind the bench for just three seasons, but he was the man who helped the club finally put it all together and build upon all lessons of the previous two decades. He’s #11 on our countdown.
Head Coach, 1987-90
An Ontario kid, Crisp spent pasts of 11 seasons playing in the NHL with the Bruins, Blues, Islanders and Flyers. He was on back-to-back Stanley Cup championship teams with the Flyers in 1974 and 1975. He retired from playing in 1977 and moved into coaching.
After being a two-time OHL coach of the year with the Soo Greyhounds, he was hired to coach the Flames’ farm team in Moncton. After two seasons in that role, he was promoted to the Flames’ NHL head coach in 1987, replacing the departing Bob Johnson.
Crisp didn’t need to lay a lot of groundwork for the Flames’ success himself – that was arguably done by Johnson and his predecessors – but Crisp’s challenge was to get the Flames star-laden roster to live up to their massive potential. His first season saw the Flames win the Presidents’ Trophy but fall short in the playoffs. His second season, 1988-89, saw them capture both the Presidents’ Trophy and the Stanley Cup.
His third season saw Crisp hit some diminishing returns; the club back-slid a bit, in part due to wear and tear and probably in part due to most coaches having a shelf live and Crisp having some friction with the team’s stars. Anyhow, with the team underachieving in 1989-90, it was easier to change up the coach than change up the roster – though that would happen in the first half of the ’90s anyway for economic reasons.
Crisp spent a couple seasons away from the NHL before becoming the Tampa Bay Lightning’s first coach. He guided them through expansion, then left coaching and transitioned into broadcasting, covering the Nashville Predators from 1998 until his recent retirement this last April.
Crisp wasn’t the best coach in Flames history – there are a couple other names still to appear on this countdown. But he’s arguably the guy that took a talented group and got the most out of them in a small window – his coaching tenure represents all of the Flames’ Presidents’ Trophies and Stanley Cups, and he deserves a ton of credit for those accomplishments.