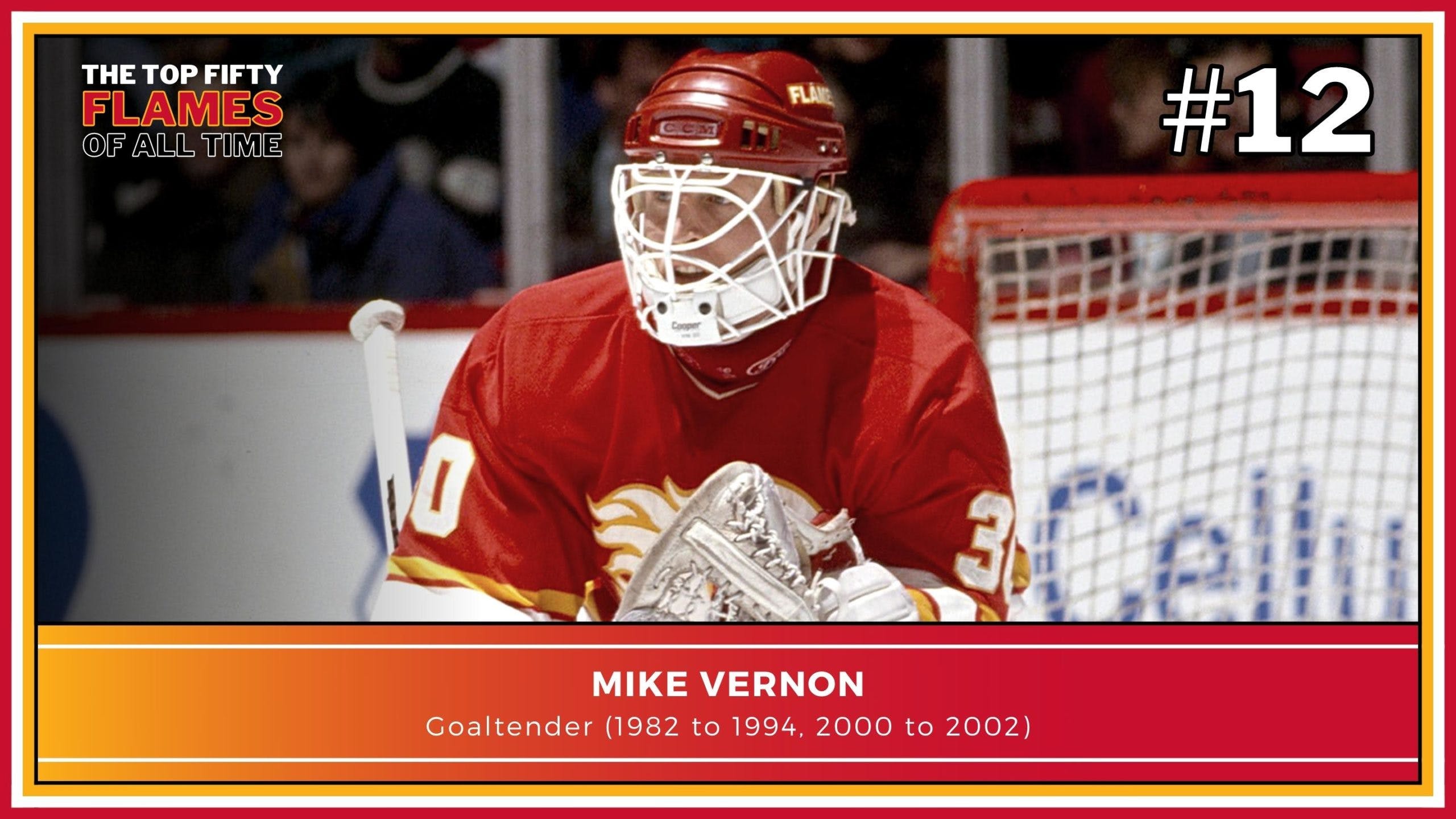 By Ryan Pike
2 months ago
The Calgary Flames have had a few really good goaltenders in their history. One of the very best they’ve ever had was a local product who helped them reach two Stanley Cup Finals in the ’80s, including catapulting them to their only Cup victory to date in 1989 on the heels of an iconic save.
Folks, let’s talk about #30 in your programs and #12 on this countdown, Mike Vernon.
Player, 1982-94 and 2000-02
Born and raised in Calgary, Vernon came up with the Western League’s Calgary Wranglers (aside from a Memorial Cup loan to the Portland Wintherhawks) and was the third round selection by the Flames in the 1981 NHL Draft. Standing just 5’9″, he had to rely on speed and positioning to be successful in net.
Vernon went pro in 1983 and after a couple seasons in the minors – with occasional NHL call-ups – he made his push for full-time work in 1985-86. Because of his strong play during the regular season against the Flames’ first-round opponents, Winnipeg, the coaching staff opted to go with Vernon as the starter over incumbent Reggie Lemelin. It worked, and the Flames rode Vernon the rest of the way, ending with a loss in the final series against Montreal.
From then on, Vernon was the Flames’ go-to guy in net. He received Vezina trophy votes four times, including being runner-up in 1988-89 and being voted a second team all-star that season. But Vernon’s legacy as a Flame is most prominently tied to a save in Game 7 against the Vancouver Canucks, robbing Stan Smyl in overtime.
The Flames went on to win that game (and series), and eventually beat Montreal for the Stanley Cup.
Vernon remained a really solid goaltender for the Flames after that season, but economic challenges (as well as Vernon’s slight decline in play as he approached his 30s) contributed to a decision to move on from him in favour of younger options in net like Trevor Kidd. Vernon was traded to Detroit in exchange for veteran defender Steve Chiasson.
Vernon played for awhile longer, with his play holding up quite well, as he had a tenure with Detroit that included another Stanley Cup. He made stops in San Jose and Florida before a brief return to the Flames – he was claimed by Minnesota in the 2000 expansion draft, then traded back to Calgary in exchange for prospect Dan Cavanaugh and a late draft pick. Vernon was used briefly in a tandem role with Fred Brathwaite in 2000-01 and served as backup to Roman Turek in 2001-02 before retiring after that season. His jersey number was retired by the Flames in 2007.
Vernon wasn’t a consistently elite goaltender the way one other Flames netminder has been historically, but he was really good for the Flames during the ’80s heyday and was a crucial part of their success during that era. He didn’t make every save, but he tended to make the saves the Flames needed him to make – the Smyl stop being the most prominent among them.