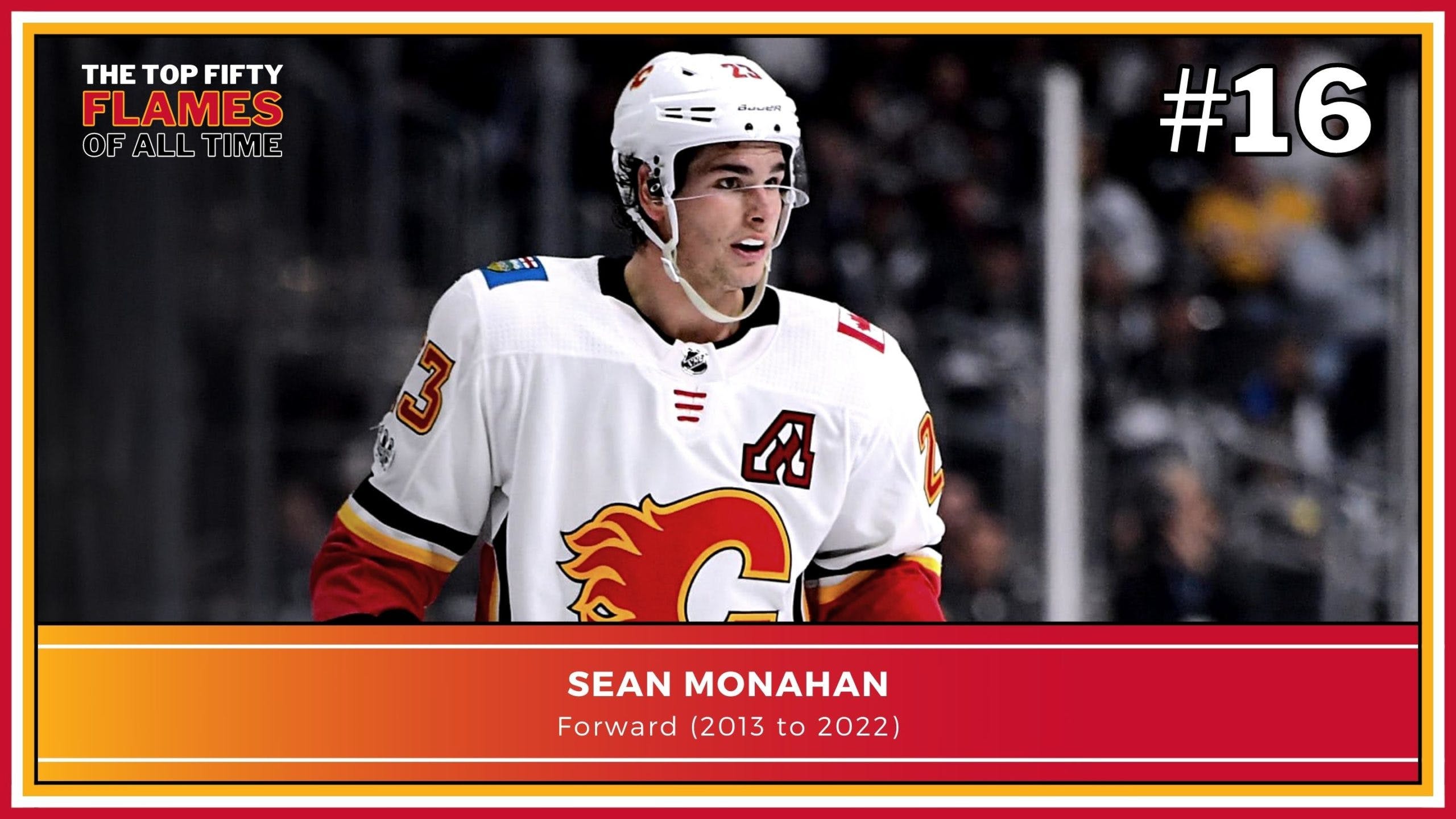 By Ryan Pike
2 months ago
In every era of the Calgary Flames franchise, there have been a few foundational players whose success helped act as a springboard for those that followed. For the modern era of the Flames, in the post-Jarome Iginla rebuild years, one of foundational talents was a reliable centre with a heck of a shot by the name of Sean Monahan.
Monahan is #16 on our countdown.
Player, 2013-22
A Brampton kid who played hockey and lacrosse growing up, Monahan grew up to be a standout with the OHL’s Ottawa 67’s. He was the sixth overall selection, taken by the Flames, in the 2013 NHL Draft.
Seemingly equal parts physically and mentally mature (and a late birthday), Monahan came into Flames camp in 2013 and really impressed, to the point where he made the team out of camp and managed to stick around as a regular for the entire season.
Monahan figuring out being a reliable, often really good, NHL centre served as the linchpin for the work that followed in building the modern Flames. When Brad Treliving arrived as GM after Monahan’s rookie campaign, he didn’t need to find a goal-scoring centre as his first priority, so he was able to spend time and brainpower on solving other roster issues.
While the roster solidified around him, Monahan was a really reliable goal-scorer. He scored between 22 and 34 goals in his first seven seasons, often while being targeted by the shutdown lines from the other teams. But he was constantly able to move the puck in the right direction, provided a strong foil to winger Johnny Gaudreau, and was frequently available in the net-front area to jam home feeds from the likes of Gaudreau, Jiri Hudler, Micheal Ferland and Elias Lindholm. His performances earned him internal recognition in the form of an alternate captaincy and external recognition in the form of votes for the Calder, Selke and Lady Byng during his tenure – he finished top five in Lady Byng voting twice.
But eventually, Monahan’s playing style – or at least his preference to make his living around the blue paint – came back to haunt him. Over the final two or three seasons he spent with the Flames, he underwent several surgeries and his mobility (and general effectiveness) were noticeable hampered. Following the 2021-22 season, the Flames sent him to Montreal with a conditional first-round pick in a cap dump move that allowed them to sign Nazem Kadri as a free agent.
During his Flames tenure, Monahan was the right guy at the right place at the right time. Literally the first piece the Flames drafted after trading away Jarome Iginla, Monahan broke in right away and became one of the best draft choices the club made – right when the rebuilding team really needed something to go their way in order to move the rebuild along. Had Monahan been less effective, or been effective less quickly, the rebuild could have gone much, much differently.