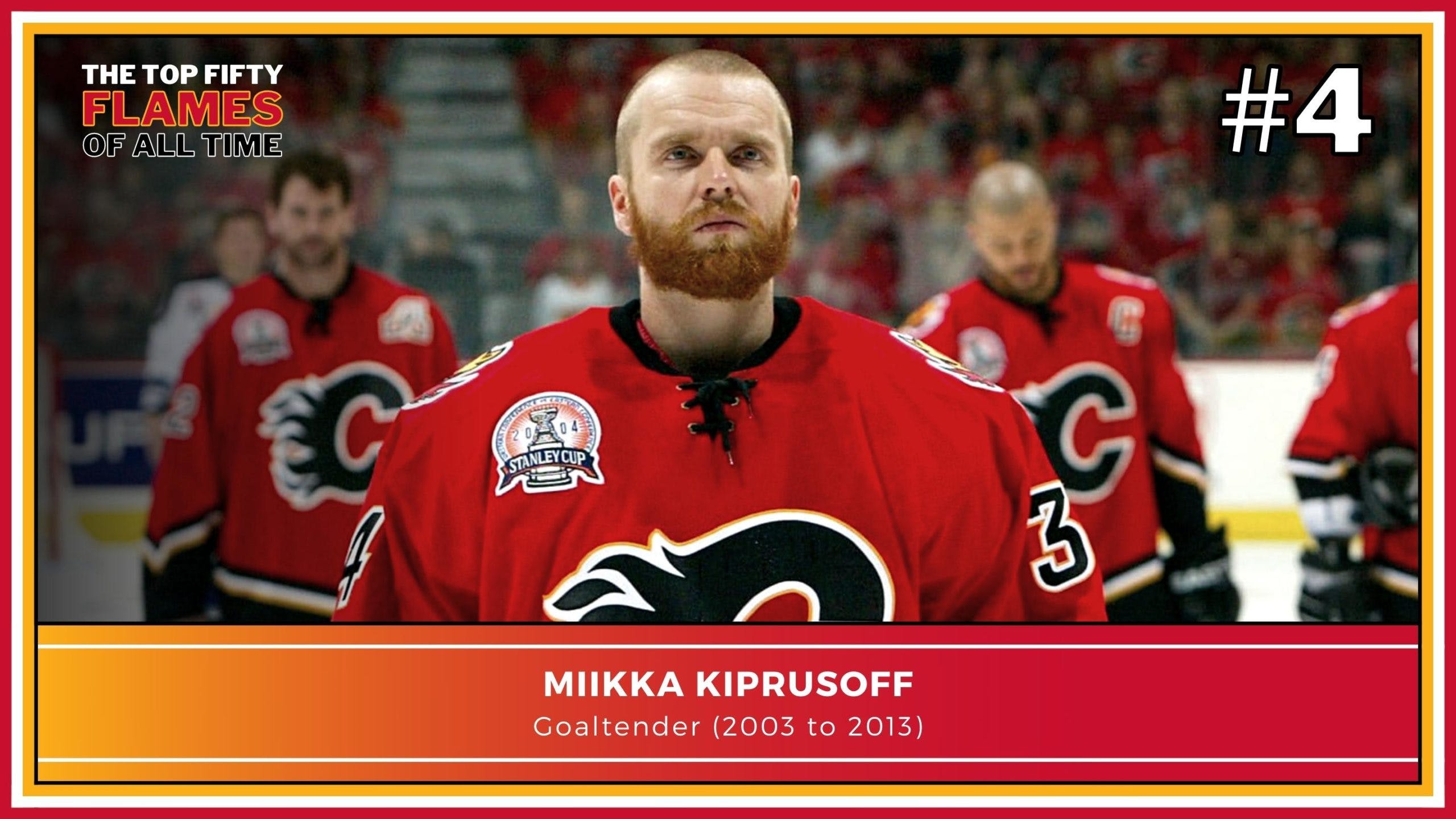 By Ryan Pike
1 month ago
The Calgary Flames franchise has had a few really good goaltenders during its history. The best goaltender they’ve ever had was a Finnish goalie by the name of Miikka Kiprusoff, who was in net for the club’s return to prominence in the 2000s.
He’s #4 on our countdown.
Player, 2003-13
A product of Turku, Finland, he came up through the TPS organization as a youngster and impressed enough to be selected in the fifth round of the 1995 NHL Draft by the San Jose Sharks. He played four seasons after being drafted, split between TPS and Sweden’s AIK, before heading to North America in 1999.
Kiprusoff emerged in the American Hockey League as a really reliable netminder for the (greatly-named) Kentucky Thoroughblades. He made a push for a spot with the Sharks, but his goal of a full-time NHL gig was stymied by the presence of fellow goaltenders Vesa Toskala and Evgeni Nabokov. By 2003, the Sharks were in a position where they were in danger of losing Kiprusoff on waivers. When Roman Turek was injured, former Sharks coach Darryl Sutter (now the Flames’ GM) traded for Kiprusoff in November 2003, sending a second-round pick to San Jose in return.
Kiprusoff spent the remainder of the season with the Flames, and his 1.69 goals against average set the modern single-season record. He back-stopped the Flames to a playoff berth, their first since 1995, and he was in net as the Flames came within a game of winning the Stanley Cup. If that was all that Kiprusoff accomplished, it would’ve been fairly decent value for the draft pick.
Kiprusoff remained a fixture in the Flames net for the next decade. He was top 10 in Vezina Trophy voting seven times, a finalist three times (2003-04, 2005-06 and 2006-07), and was the first Flame to capture the award in 2005-06. He was voted a finalist for the Hart Trophy that year, too. Kiprusoff holds essentially every significant Flames franchise goaltending record, either single-season or career.
If there’s a significant Flames moment during the Jarome Iginla Era of the club’s history, odds are Kiprusoff was in net for the Flames during that moment. Kiprusoff’s consistently strong play held the Flames in a lot of close games, and him solidifying the goaltending position provided a foundation for a lot of Flames successes in the late 2000s. Plus, he was usually good for one or two mind-boggling athletic saves per season.
Kiprusoff’s play declined late in his career: the 2012-13 season saw him battle injuries and uncharacteristic inconsistency, and he retired following that season. He returned to Finland, where he’s lived the quiet life, primarily fishing with occasional forays into coaching hockey in Finland. (His jersey number has been out of rotation since his retirement from hockey, and it seems likely that the Flames will eventually arrange for a formal retirement when they can eventually lure him out of solitude for a ceremony.)
All due respect to Mike Vernon, but Kiprusoff is both the best and most important goaltender in Flames history. Swap another goalie in for Kiprusoff during the 2003-13 period and you probably get much different – and less impressive – results.